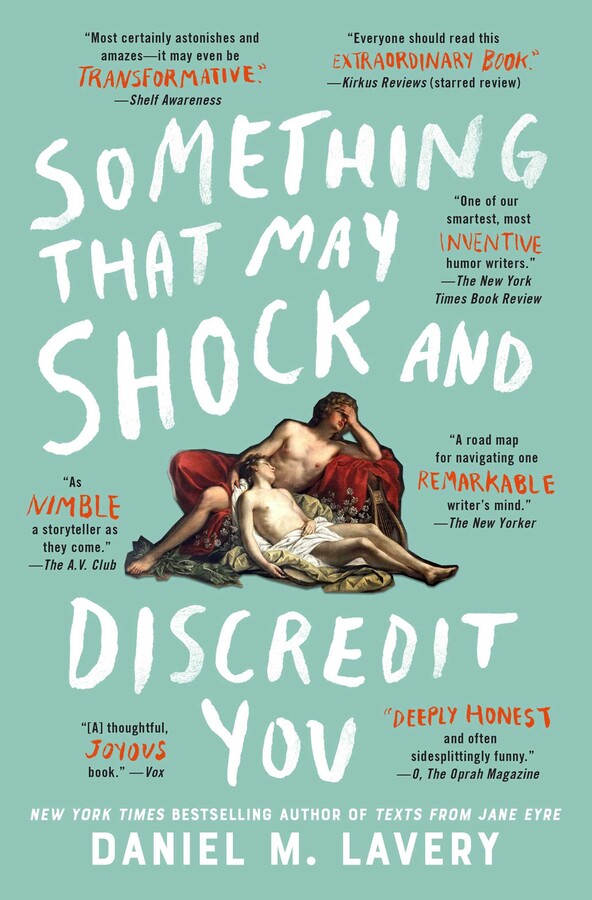 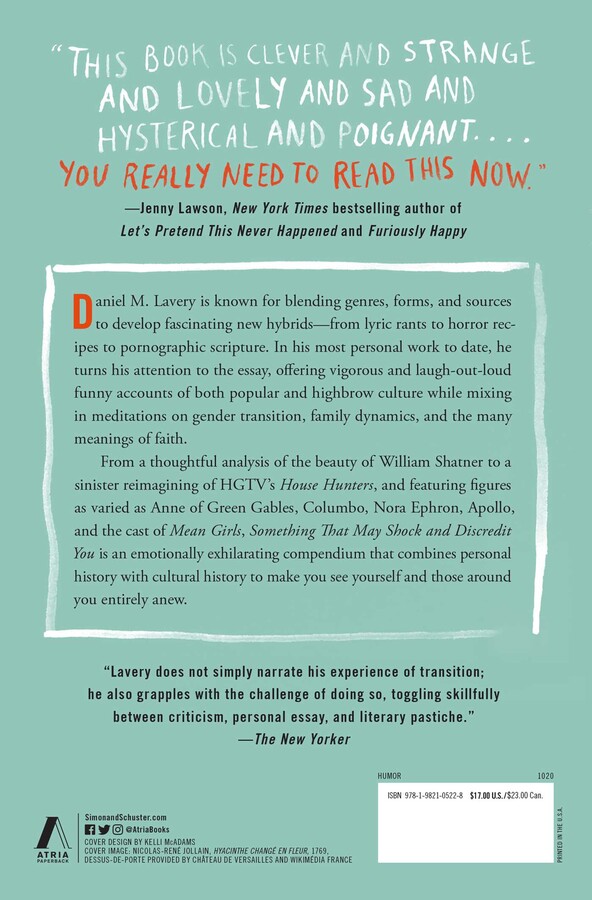 “One of our smartest, most inventive humor writers, Ortberg combines bathos and the devotional into a revelation.” —Jordy Rosenberg, The New York Times Book Review

From the New York Times bestselling author of Texts From Jane Eyre and Merry Spinster, writer of Slate’s “Dear Prudence” column, and cofounder of The Toast comes a hilarious and stirring collection of essays and cultural observations spanning pop culture—from the endearingly popular to the staggeringly obscure.

Daniel M. Lavery is known for blending genres, forms, and sources to develop fascinating new hybrids—from lyric rants to horror recipes to pornographic scripture. In his most personal work to date, he turns his attention to the essay, offering vigorous and laugh-out-loud funny accounts of both popular and highbrow culture while mixing in meditations on gender transition, family dynamics, and the many meanings of faith.

From a thoughtful analysis of the beauty of William Shatner to a sinister reimagining of HGTV’s House Hunters, and featuring figures as varied as Anne of Green Gables, Columbo, Nora Ephron, Apollo, and the cast of Mean Girls, Something That May Shock and Discredit You is a hilarious and emotionally exhilarating compendium that combines personal history with cultural history to make you see yourself and those around you entirely anew. It further establishes Lavery as one of the most innovative and engaging voices of his generation—and it may just change the way you think about Lord Byron forever.

But I’m also scared about my male privilege!

I’m sorry I lured the tomboys away to Boy Island. I am heartily sorry for my fault, my fault, my grievous fault, and I promise to make a good-faith error at restitution, returning at least five tomboys or their cash equivalent.

Trans people: Always mesmerized, held, fascinated, and ultimately defeated by reflective surfaces. What’s that, you say? A mirror of some kind? Hold it up to me so I might gaze at it with longing and dissatisfaction.

Room to work in a Golden Bough reference, maybe? Joseph Campbell, at the very least.

In which the author clearly feels obligated to badly summarize theory in order to offer a publicly defensible sense of self.

In which the author has grown a thin, dreadful mustache, which the reader can intuitively sense through the page.

That’d be nice, right? Maybe in velvet; I don’t know. It’s soft now! We can all enjoy it this way.

If I’m honest—which I’m not—I did it for male attention. (Both the opening of doors and transition.)

In which the author refers to himself, alternately, as a “gender rebel,” “smuggler,” “real-life-sexual-crossing-guard,” and, for some reason, a cyborg.

It’s subversive and important when I do it. 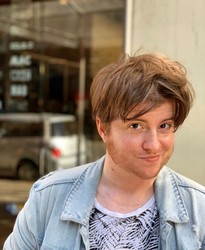 Daniel M. Lavery is the “Dear Prudence” advice columnist at Slate, the cofounder of The Toast, and the New York Times bestselling author of Texts From Jane Eyre and The Merry Spinster.

“This book is clever and strange and lovely and sad and hysterical and poignant. These are the qualities that make up most of my favorite people and all of my favorite books. You really need to read this now.” —Jenny Lawson, New York Times bestselling author of Let’s Pretend This Never Happened and Furiously Happy

“At last, we have the work of transgender bathos we didn’t know we needed, but very much do. . . . Rejecting the suffering bildung often demanded of transgender writers, Ortberg’s narrative is anything but linear: It skips back in time to mythic Greece, traipses across the landscape of contemporary pop culture and, in one wonderfully fabulist entry that would make Carmen Maria Machado proud, slips outside of time altogether. Such temporal vertigo makes Something That May Shock and Discredit You addictively strange and delightful. . . . One of our smartest, most inventive humor writers, Ortberg combines bathos and the devotional into a revelation.” —Jordy Rosenberg, The New York Times Book Review

“A delightful hybrid of a book…blends genres with expert facility….Throughout, Ortberg's writing is vulnerable but confident, specific but never narrow, literal and lyrical. The author is refreshingly unafraid of his own uncertainty, but he's always definitive where it counts….You'll laugh, you'll cry, often both at once. Everyone should read this extraordinary book.” —Kirkus Reviews (starred review)

“Ortberg brings the full force of his wit and literary depth to this genre-bending essay collection, [which] intersperses searingly honest passages about his journey as a transgender man with laugh-out-loud funny literary pastiche….an often hilarious, sometimes discomfiting, but invariably honest account of one man’s becoming.” —Publishers Weekly

“Like all of his work, Something That May Shock and Discredit You is a stand-alone pillar in Ortberg’s remarkable canon, one in which the lines typically drawn around topic and genre are obliterated, resulting in a wide-open field of possibility.” —Electric Literature

“Ortberg gracefully slips between the memoirist's lucid personal narrative and the essayist's more topical ruminations. Passage after passage sees him refining a riveting intertextual portrait of his life and transness fit for the pages of an illuminated manuscript….Discarding any distinction between high and low cultures, Ortberg's Something that May Shock and Discredit You most certainly astonishes and amazes--it may even be transformative.” —Dave Wheeler, Shelf Awareness

“Ortberg does not simply narrate his experience of transition; he also grapples with the challenge of doing so, toggling skillfully between criticism, personal essay, and literary pastiche….Animated by Ortberg’s Christian faith and eclectic cultural enthusiasms, the book is a syllabus of sorts—a road map for navigating one remarkable writer’s mind.” —The New Yorker