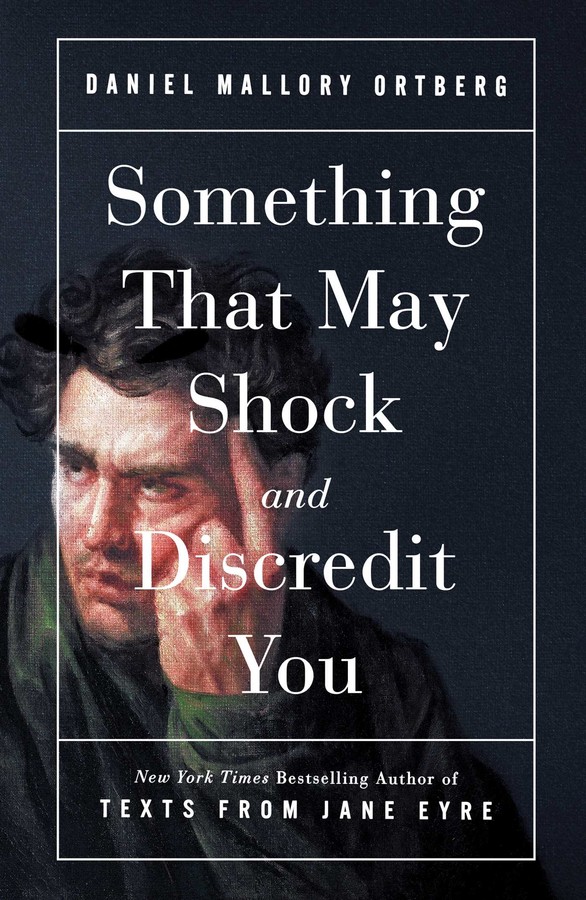 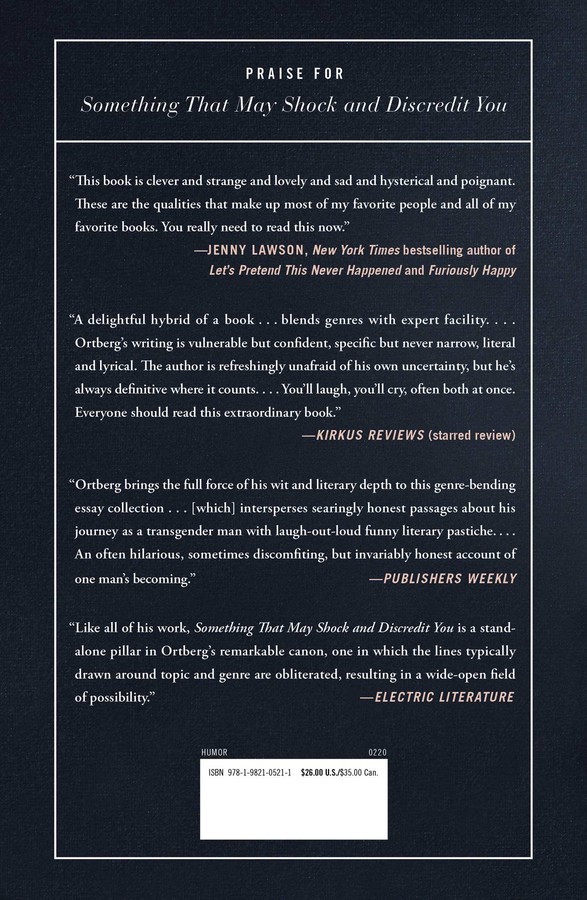 Named one of the most anticipated books of the year by Entertainment Weekly, O, The Oprah Magazine, BuzzFeed, Electric Literature, Yahoo Lifestyle, and Bitch Media

“A delightful hybrid of a book… Youll laugh, you'll cry, often both at once. Everyone should read this extraordinary book.” —Kirkus Reviews (starred review)

From the New York Times bestselling author of Texts From Jane Eyre and Merry Spinster, writer of Slate’s “Dear Prudence” column, and cofounder of The Toast comes a hilarious and stirring collection of essays and cultural observations spanning pop culture—from the endearingly popular to the staggeringly obscure.

Daniel Mallory Ortberg is known for blending genres, forms, and sources to develop fascinating new hybrids—from lyric rants to horror recipes to pornographic scripture. In his most personal work to date, he turns his attention to the essay, offering vigorous and laugh-out-loud funny accounts of both popular and highbrow culture while mixing in meditations on gender transition, family dynamics, and the many meanings of faith.

From a thoughtful analysis of the beauty of William Shatner to a sinister reimagining of HGTV’s House Hunters, and featuring figures as varied as Anne of Green Gables, Columbo, Nora Ephron, Apollo, and the cast of Mean Girls, Something That May Shock and Discredit You is a hilarious and emotionally exhilarating compendium that combines personal history with cultural history to make you see yourself and those around you entirely anew. It further establishes Ortberg as one of the most innovative and engaging voices of his generation—and it may just change the way you think about Lord Byron forever.

I was aware, too, that my parents’ theology did not have much room for the kind of guessing-games- and crossword-puzzle-style approach to eschatology popular among many white evangelicals in the 1990s, that if I were to press them for details about the End Times trivia I had absorbed by virtue of growing up in the suburban Midwest they would at best dismiss it and at worst ask where on earth I’d picked up such things. I had a sharp sense for when keeping a secret would result in a pleasanter outcome, and preferred to occasionally play out Rapture-like scenarios in private than have them either confirmed or debunked by outside opinion. I could have a Rapture a day if I liked—as long as I never asked my parents’ permission to go Rapturing—and dedicated a number of afternoons to making myself dizzy imagining the day when time would burst and unspool itself in every possible direction, and all those willing to be perfected would be milled down by the grindstone of heaven in a lovely, terrifying roar.

At least part of the reason I never asked anyone questions about the fears and desires that preoccupied me was a peculiar certainty that to invite details would destroy anything I hoped for; that the loveliness of being pressed directly against God’s heart and melted down into holiness would become ridiculous if a start date were ever announced. And I did fear it, often, for as much as I longed to be seized, swept up, and changed without or even against my will, I also dreaded it. I was possessed of a rootless homesickness that translated quite neatly, for a religious eleven-year-old, into heaven-longing; later it would translate quite neatly, for a nervous thirty-one-year-old, into transsexuality.

In the early days of my transition (when “transition” consisted mostly of refusing to wash my clothes, letting them pile up on the floor so I could weep in bed, getting significant haircuts, and responding incredibly tersely if any of my friends acknowledged that I’d cut my hair in any way), I often described my sudden shift in self-awareness as feeling as if a demon had entered my room in the middle of the night, startled me awake by whispering, “What if you were a man, sort of?” into my ear, then slithered out the window before I could ask any follow-up questions. I had been eating and drinking, working and laying work aside, and then the floodwaters prevailed exceedingly on the earth, and all the high hills under the whole heaven were covered. All flesh died that moved upon the earth, birds and cattle and beasts and every creeping thing that creeps on the earth, and every man, all in whose nostrils was the breath of the spirit of life, all that was on the dry land, died and were destroyed from the earth. And the waters prevailed on the earth one hundred and fifty days. Sometimes cis people will describe a sense of loss at the transition of a loved one and describe it as mourning a kind of death, but I think they’ve got it the wrong way round. It was if everything on the earth was dead and dying except for me, and that none of the practice runs I’d ever rehearsed in childhood had prepared me for it.

I revisited my own childhood constantly for anything that would be sufficient to make sense of my present situation and was frustrated once again by my own calculated, dreamy vagueness; how like me not to keep a written record of anything I might later like to read. No one knows the hour of the coming of the Son of Man (who might start asking questions), so it’s best to travel light. It was such a ridiculous and yet a persistent thought, which came on all at once and in a way that suggested it had always been with me: What if you were a man, sort of? To which the only response imaginable was What if I were anything? What if I were Donkey Kong, or the city of Chicago? Nothing in my life previous could have prepared me for this question, and I was unqualified to answer it. It was a ridiculous thought to think, and a ridiculous feeling to feel, and yet there it was, so often lurking just beneath something else: What if you were a man, sort of?

Riddle-posing night-demons, the happy days of Noah, the hour of the Son of Man—one of the many advantages of a religious childhood is the variety of metaphors made available to describe untranslatable inner experiences. A few years later, with a transition slightly less bed-centered, I might have described that feeling instead as this: after a number of years being vaguely troubled by an inconsistent, inexplicable sense of homesickness, I woke up one morning and remembered my home address, having forgotten even that I forgot it in the first place, then grown fearful and weary at even the prospect of trying to get back. I have often had a relationship to men that has been bewildering to me. I have been sometimes too charged with an emotion I cannot name, and tried to get them to relate to me in a way that was not easily recognizable, either to them or to me. Had I been in any way prepared for that moment of question-asking, I would have arranged my life in such a way that the moment would have never come. I never saw it coming, so I was never ready; then it was over.

The timeline of awaiting a rapture is broken into two parts: First one becomes willing to be stolen away, then one waits patiently for it to happen, occasionally topping up one’s own willingness and preparedness if stores seem to be running low. But the forces of heaven do the lifting, the heavy work, the spiriting away, the catching up of the body in the air. The timeline of transition is both alike and nothing like it: one becomes, if not willing to transition, at least curious, sometimes desperate, sometimes terrified, sometimes confident, sometimes tentative. Then, at some point, one has to do or say something in order to make it happen. The force of my desire to transition, when I allowed myself to be hit with the full force of it, felt so supernatural and overwhelming it was as if all I had to do was stand and wait and somehow the process would begin itself around me, first the lifting, then the heavy work, then the catching up of the body in the air, then the translation from the corruptible to the incorruptible. My own desires had seemed external to me—I certainly couldn’t remember deciding to want anything—so it stood to reason that whatever came next would happen to me rather than because of me.

“Then two will be in the field: one will be taken and the other left. Two women will be grinding flour at the mill: one will be taken and the other left. Watch therefore, for you do not know what hour your Lord is coming. But know this, that if the master of the house had not known what hour the thief would come, he would have watched and not suffered his house to be broken into. Therefore you also be ready, for you know not what hour your Lord comes.” I had not foreseen the hour when I would be struck by transition-longing. How then could I be asked to discern what came next? I hoped with all my heart to wait long enough for my desires to pass, or to be remade at someone else’s hands. “For God was pleased through Him to reconcile to Himself all things, whether things on earth or things in heaven, by making peace” (Col. 1:20). Everyone will be reconciled through peace and pleasure who can possibly stand it. If you don’t squeeze through the door at first, just wait patiently for Heaven to grind you into a shape that fits.

Daniel Mallory Ortberg is the “Dear Prudence” advice columnist at Slate, the cofounder of The Toast, and the New York Times bestselling author of Texts From Jane Eyre and The Merry Spinster.

“This book is clever and strange and lovely and sad and hysterical and poignant. These are the qualities that make up most of my favorite people and all of my favorite books. You really need to read this now.” —Jenny Lawson, New York Times bestselling author of Let’s Pretend This Never Happened and Furiously Happy

“A delightful hybrid of a book…blends genres with expert facility….Throughout, Ortberg's writing is vulnerable but confident, specific but never narrow, literal and lyrical. The author is refreshingly unafraid of his own uncertainty, but he's always definitive where it counts….You'll laugh, you'll cry, often both at once. Everyone should read this extraordinary book.” —Kirkus Reviews (starred review)

“Ortberg brings the full force of his wit and literary depth to this genre-bending essay collection, [which] intersperses searingly honest passages about his journey as a transgender man with laugh-out-loud funny literary pastiche….an often hilarious, sometimes discomfiting, but invariably honest account of one man’s becoming.” —Publishers Weekly

“Like all of his work, Something That May Shock and Discredit You is a stand-alone pillar in Ortberg’s remarkable canon, one in which the lines typically drawn around topic and genre are obliterated, resulting in a wide-open field of possibility.” —Electric Literature