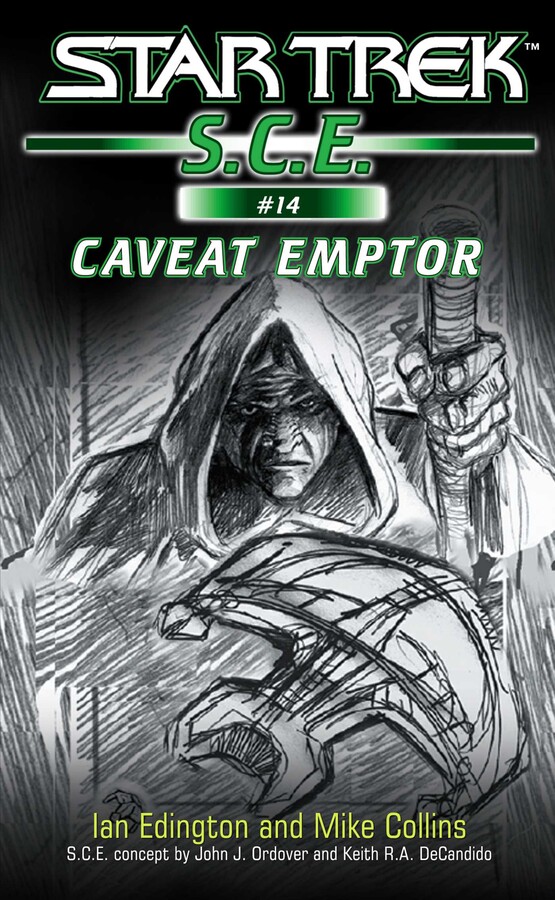 STARFLEET CORPS OF ENGINEERS
CAVEAT EMPTOR
DaiMon Forg of the Ferengi Merchantman thought he was getting a fantastic new computer at a stunningly low price. But he realized too late that the price he paid for the machine from Beta 3 was far too high...
What starts as a simple rescue mission reveals something that astonishes the U.S.S. da Vinci crew -- a ship full of polite, docile, and generous Ferengi! Soon, Commander Gomez and her S.C.E. team realize that the Ferengi have been taken over by Landru, the ancient super-computer, which has returned -- a century after being dismantled by the crew of the Starship Enterprise -- to wreak havoc once more.
And Landru has set its sights on the da Vinci next...

Forg held his breath and listened intently, straining to detect even the slightest sound.
There was nothing.
A trickle of cold sweat snaked its way down the back of his neck, quickly prompting him to bite his lip, stifling a sudden squeak of terror. Under normal circumstances, the halls of a Ferengi Merchantman positively buzzed with the chatter of conspiracies and intrigue and of deals being struck. But now there wasn't even the reassuringly, sensual chink of gold-pressed latinum.
It was...unnatural.
Forg prided himself on having the kind of lobes that could detect the unique sound of a strip of latinum being dropped thirty meters away. In fact, during his apprenticeship back in the Commercial and Mercantile Institute of Ferenginar, he could correctly identify seventy-five different forms of currency just from the way they hit the ground. His father had been so impressed that he'd bought him an Institute Commendation, to be deducted against his future earnings, of course.
Forg nibbled uncomfortably at his lip. The discomfort was nothing compared to the growing fear in his stomach. It was either that or the spore pie he'd eaten after he'd finished his shift six hours ago.
Six hours, had it only been that long?
He reached a junction and hesitated. Flattening himself against the wall, he peered tentatively around the corner. The corridor beyond was deserted. He allowed himself the luxury of exhaling. At the far end lay the escape pods. If he could just keep his nerve for a little while longer, he would be free of this nightmare. Tiptoeing as gingerly as he dared, he cast quick glances at the doorways on either side, expecting them to suddenly hiss open at any second and see one of them standing there.
Forg froze. There was something on the floor just ahead. He recognized it as a strip of latinum. What's more, it was still in its mint wraps. And it wasn't alone. There were others, lots of them. So many, in fact, he could buy this ship a hundred times over and still have enough change to keep him hip-deep in Dabo girls for life. Forg felt the familiar tingling sensation of greed washing over him.
He followed the glittering trail to the bank of escape pods. A green light winked on the control console above one of the hatches. A pod had been launched. Someone else had escaped.
Down at his feet, a gray security crate lay on its side, spilling latinum. Like the rest they were all still in their wraps, as shiny and pristine as the day they were minted. He recognized the family crest stamped on the wraps. This wasn't just anyone's personal horde. It belonged to the ship's owner, DaiMon Phug.
Forg's momentary glee soon faded as he wondered what it was that could force Phug to abandon his fortune barely a meter away from freedom? Whatever it was, it wasn't there now and as such was Phug's loss. Forg balanced his fear against his avarice and found they came out pretty even. He decided to go with the latter; after all wasn't it the Sixty-Second Rule of Acquisition that stated, "The riskier the road, the greater the profit"?
Besides, he had a plan.
He popped the hatch of the nearest pod and began loading the latinum inside. Initially, he assured himself, he was only going to take the strips that were within arm's length. There was no need to take foolish risks.
But...
To abandon those strips only a few steps away seemed foolish, not to mention wasteful. So he took the steps, then some more, and even more still, each time scuttling back to hurl another armful into the pod, mentally tallying up the worth of each load.
A matching pair of latinum lobe buffers and fang sharpeners. A complete, lifetime's wardrobe of the finest Tholian silk (including underwear). An estate in the Colloid marshes. A brand new, not reconditioned, trading schooner with its own captain's yacht. A moon -- maybe two.
Plus, of course, a substantial donation to the Prophets of the Divine Treasury -- ensuring his name was recited in the Annual Tally so that he might be looked upon favorably by the Blessed Exchequer and the Celestial Auctioneers. Forg wasn't usually so diligent in his spiritual devotions, but it never hurt to hedge your bets.
Somewhere among his fantasies of prospective underwear, real estate, and a comfortable afterlife, Forg failed to hear the hiss that he'd so previously dreaded. However, his terror returned with a vengeance as he waddled down the corridor laden with booty only to be confronted by a short, dark stranger. The tumbling latinum bruised two of his toes but fear had stolen Forg's voice.
The figure was dressed in a floor-length hooded robe improvised from black cargo sheeting. In his hand, a staff as tall as the figure himself was cut from a section of conduit piping. The figure slowly lifted his head to face him. Forg's eyes widened in recognition.
"Zin?" he finally croaked, incredulous.
No, not anymore, Forg realized. He began to slowly back away, managing only a few agonizing steps before the ominous rustle of more robes behind him rooted him to the spot.
"Please," he whispered, "don't." But his plea fell on large, deaf ears.
He saw Zin's dead eyes.
He saw the staff.
After that...nothing.

Mike Collins has a long career in comics publishing working on both creator-owned and licensed properties, including contributions to Batman, Superman, Justice League, Uncanny X-Men, among others. Mike lives in Wales, England.