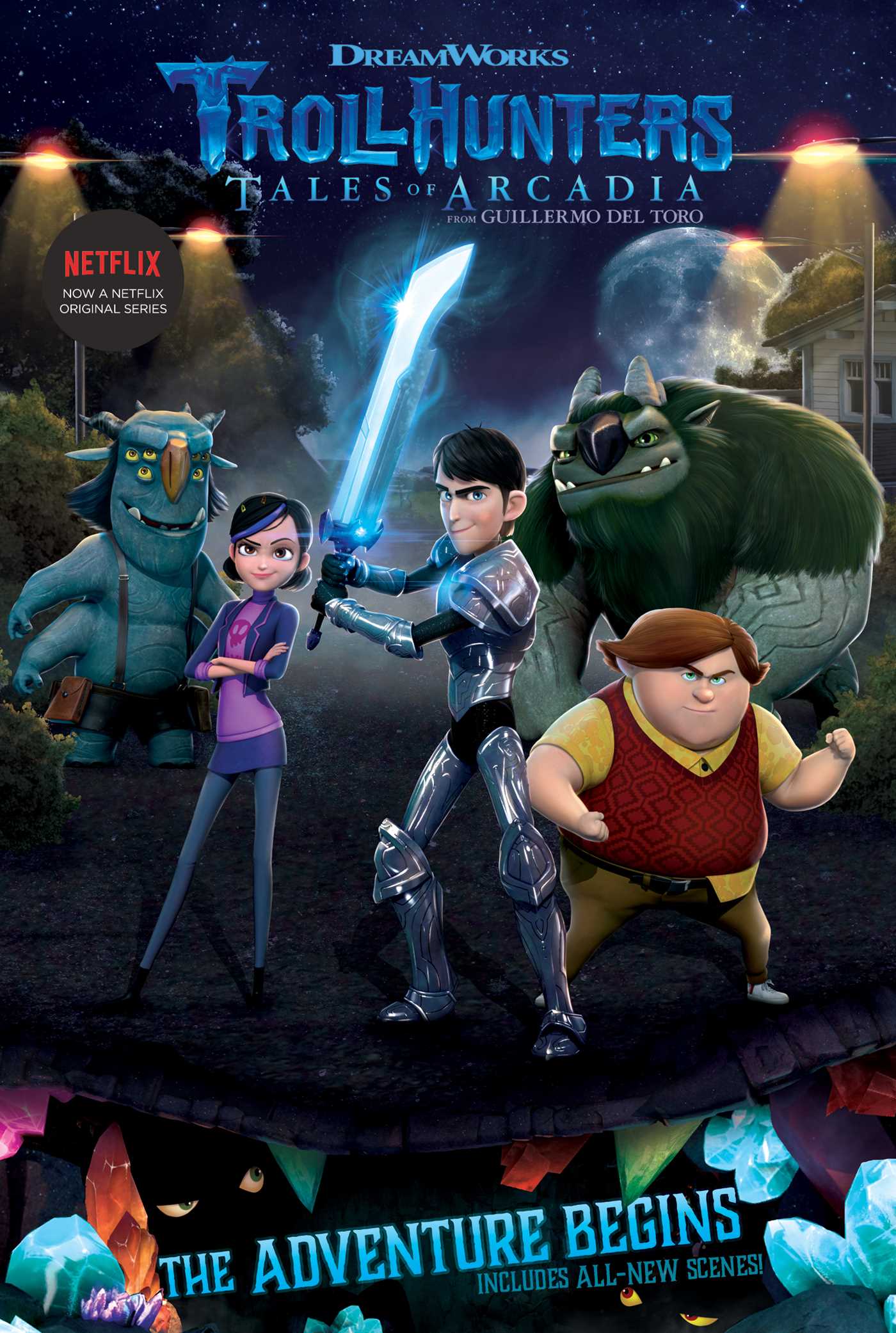 Two worlds collide in this epic retelling of the Trollhunters episode that started it all in the hit Netflix series from the limitless imagination of acclaimed filmmaker Guillermo del Toro and DreamWorks Animation. This novel includes never-before-told scenes!

For the glory of Merlin, Daylight is mine to command!

Fifteen-year-old Jim Lake is just an ordinary teenager. That is, of course, until he is chosen to be the first human protector of a secret world of Trolls living below his peaceful hometown of Arcadia. If Jim fails at his mission, humankind will cease to exist. The fate of the world rests on his shoulders. Can Jim be the Trollhunter and stay a normal kid at the same time? Probably not. But being normal was never really any fun anyway.

Fans of the Netflix series are sure to be enthralled by this thrilling retelling of how Jim Lake’s amazing adventure began. Not only that, they can also learn details about Jim’s backstory and home life that aren’t included in the episode. The Adventure Begins is a must-read for all Trollhunters fans!

This book includes full-color glossy inserts with images from the episode!

The Adventure Begins CHAPTER 1 DAYLIGHT
The alarm clock on the desk clicked to 6:00 a.m., emitting the same annoying beep it did every school day. James Lake Jr. blinked his eyes open slowly, still remembering his strange dream. He was surrounded by thousands of disassembled Vespa scooter parts without instructions or anyone around to help him put it all back together. And Jim had this feeling that carried over from the dream into the morning—a dreadful sense that time was running out. Looking at the alarm clock didn’t help the feeling go away.

Dressing and combing his black hair in a hurry, Jim went downstairs into the kitchen and started cooking three meals at once: buttered toast for himself (a simple but oh-so-satisfying breakfast), a chipotle-ketchup-glazed meat loaf baking in the oven, and a caramelized onion and goat cheese omelet. Jim worked his Santoku knife with practiced precision across the cutting board, putting a fine dice on the red onions. And he had enough faded scars on his fingertips to remind him to keep them tucked as he sliced the basil into a chiffonade.

Multitasking around the kitchen, Jim pulled the meat loaf from the oven and portioned three slices of it into three separate sandwiches, and folded the omelet effortlessly in the skillet. Not bad for a Tuesday. Now came Jim’s favorite part: he washed his knife in the sink and air-dried it by twirling the blade between his fingers.

Once he had spun every last drop of moisture off its surface, Jim holstered the Santoku in the knife block, plated the omelet, and carried it upstairs on a tray. He gently opened the door to the second bedroom and found his mom, Barbara, sound asleep in her bed.

Jim set the tray down on the night table, gently removed his mom’s glasses from her face, and polished them with his sweater before placing them next to the omelet. Seeing her there, looking so peaceful, Jim felt kind of sorry for his mom. She worked so hard at the hospital, actually saving peoples’ lives, and providing for the two of them. Jim vowed long ago never to complain about making meals. It was the least he could do to help his mom out. That, and she was also a really terrible cook.

“Love you, Mom,” Jim said softly as he kissed her on the head and went back downstairs.

The garage door cranked open mechanically, and Jim walked his bike outside, squinting against the brilliant sunlight.

Jim smiled when he saw Toby Domzalski waiting for him at the end of the driveway. Tobes was trying to stuff his head into a bike helmet that he had long since outgrown.

Toby’s braces shined in the sunlight as he rolled his tongue inside his mouth, trying to place that last flavor he was smelling.

Jim smiled. Ever since kindergarten, Toby had always had, well, an appreciation for food. Toby loved the way Jim used equal parts ground beef and pork to keep his meat loaf tender, and Jim loved how Toby loved stuff like that.

“What’s life without a little adventure?” joked Jim as he hopped onto his bike.

Toby did the same (after a few failed attempts), and the guys pedaled their way to school. Since they were running late, they cut through the woods toward the canal to save five minutes. Toby complained about the bumpy ride, but Jim couldn’t help but tune him out a bit and savor the ride. He lived for moments like these—racing against the clock, feeling the wind against his face, and jumping his bike over a hill whenever he got a chance.

Those little thrills kept Jim focused on the moment and not worried about the day ahead. The idea of sitting through a bunch of classes he was not particularly good at, all while trying not to stare at the amazing girl who didn’t even know he existed, made Jim’s stomach twist. He wondered how long he would feel this way. How long he would just be so . . . ordinary. All through high school? College? That sensation of time running out returned to Jim, sending a fresh pang of worry to his gut.

Oh well, Jim thought as Toby blabbed on behind him. Claire Nuñez may never notice me, but at least I’ve got Tobes. And my mom. And a promising career making sandwiches, I guess. Meat loaf is great and all, but still. I wish there was . . . more.

Jim tried to push all his anxiety aside as he rushed toward the canal. Reaching its concrete edge, Jim pulled up on his handlebars and his bike caught air. During the downward arc, he felt free—free of responsibility, free of worry, free of that nagging voice in his head—for a few fun, fleeting, glorious seconds.

The tires landed at the bottom of the canal with a rubber squeak, and Jim looked back toward the woods, waiting for the lagging Toby.

“Come on, Tobes!” Jim called out, his voice bouncing against the canal’s graffiti-covered walls.

No response came from Toby. He was probably too far behind to hear Jim anyway. Instead, Jim heard another voice echo in his mind. Not the usual one that popped up to second-guess Jim all the time.

No, this was an unfamiliar voice. It sounded old, powerful, and deathly serious as Jim felt it call out his name.