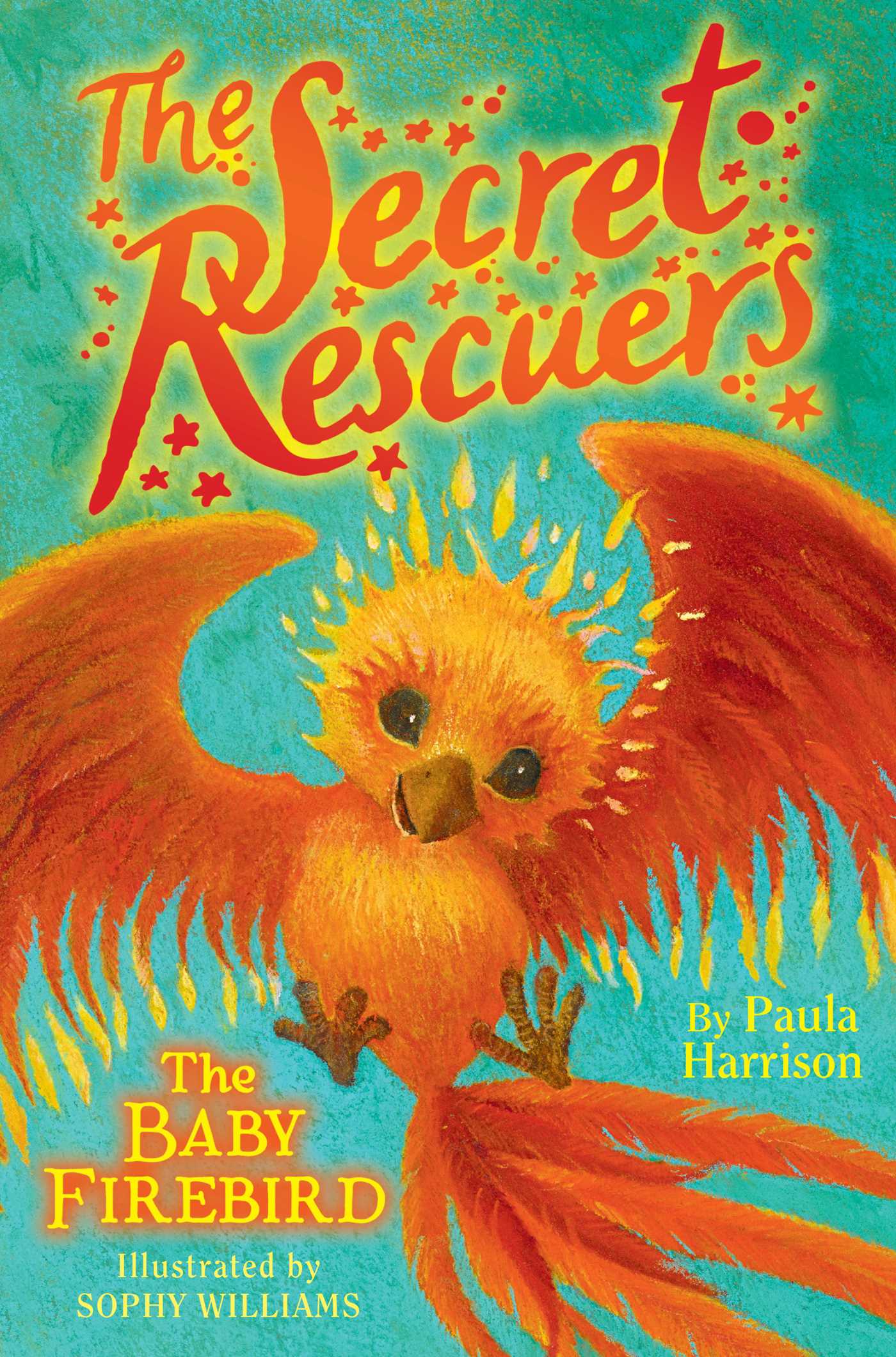 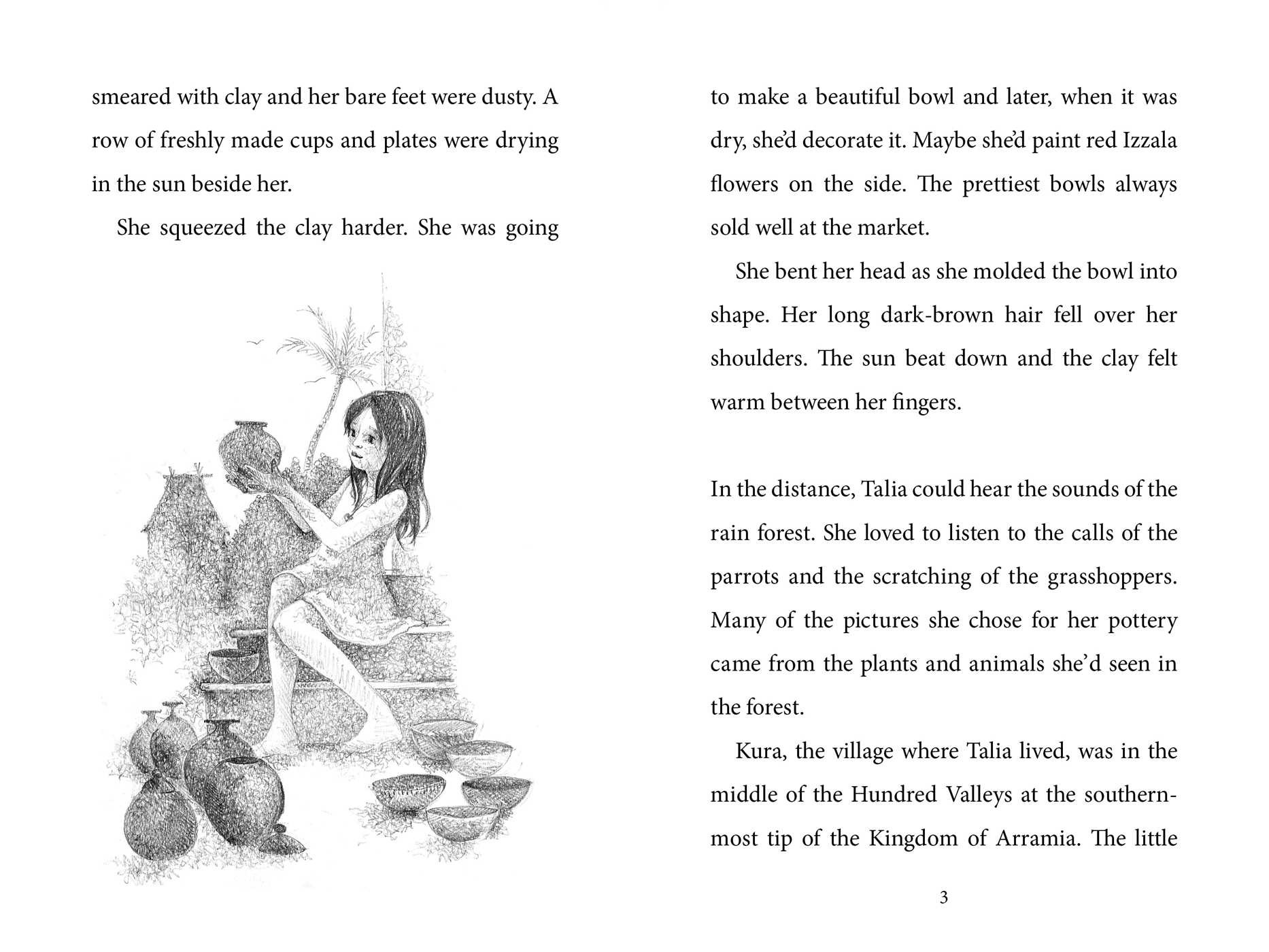 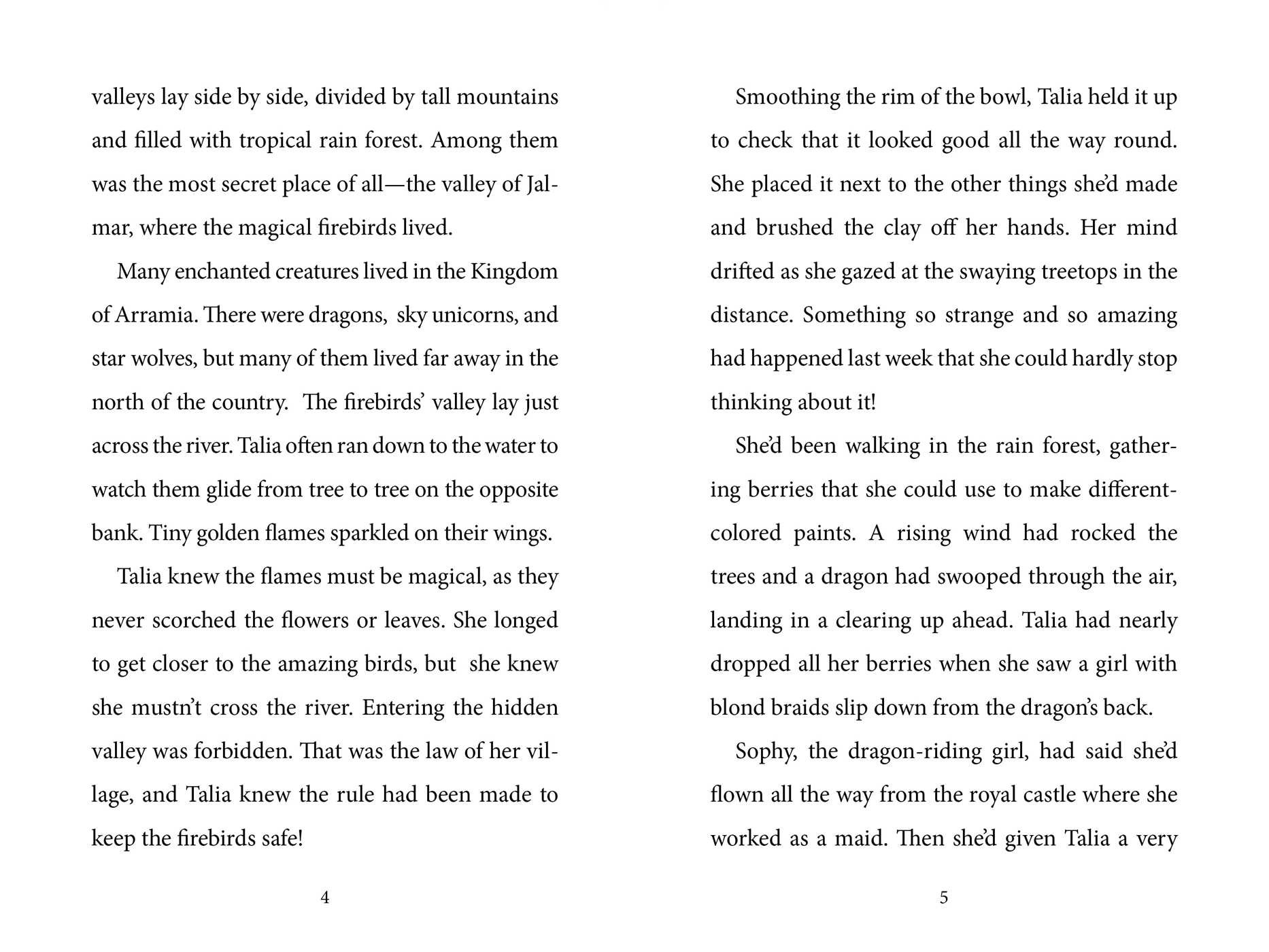 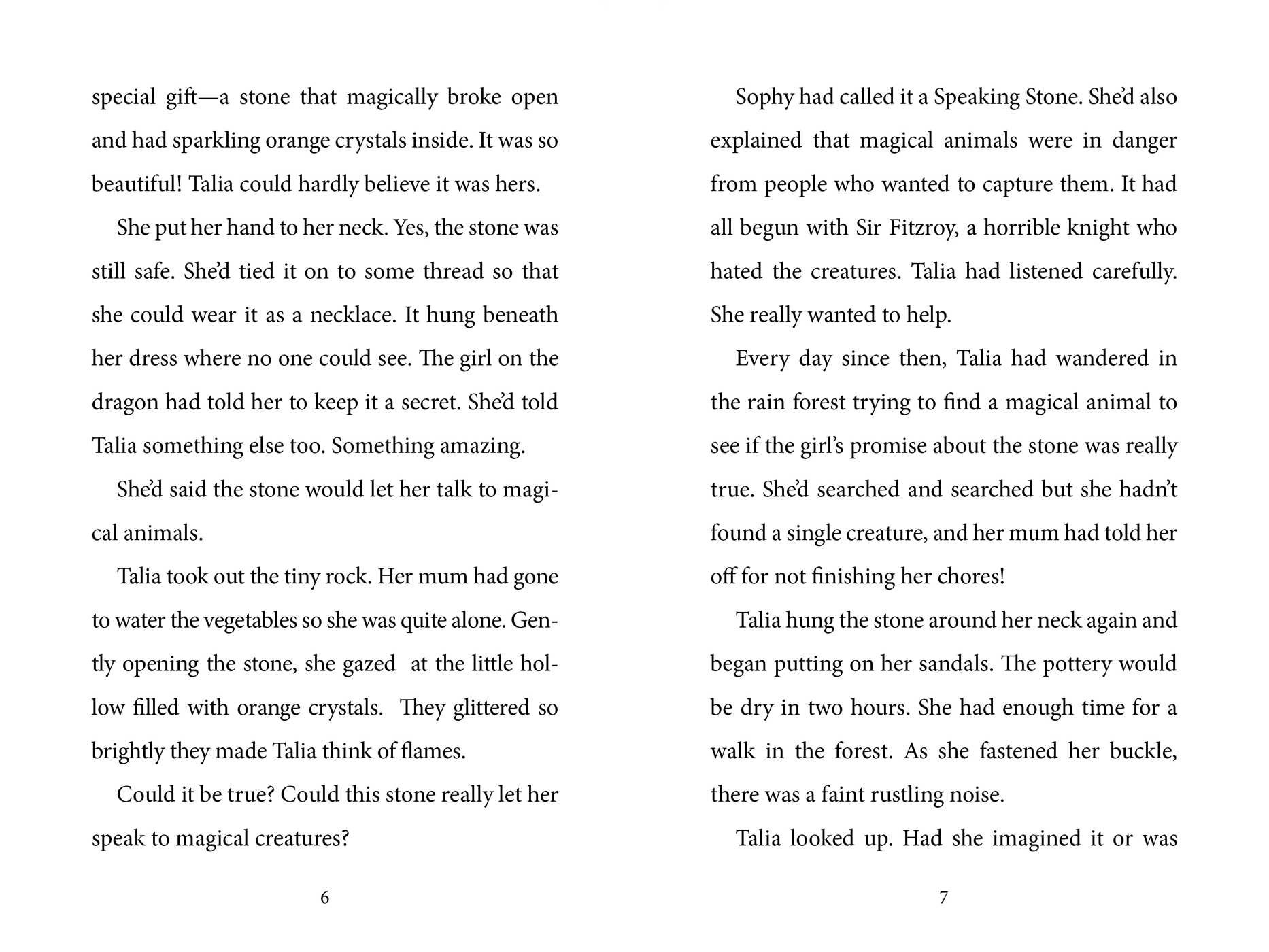 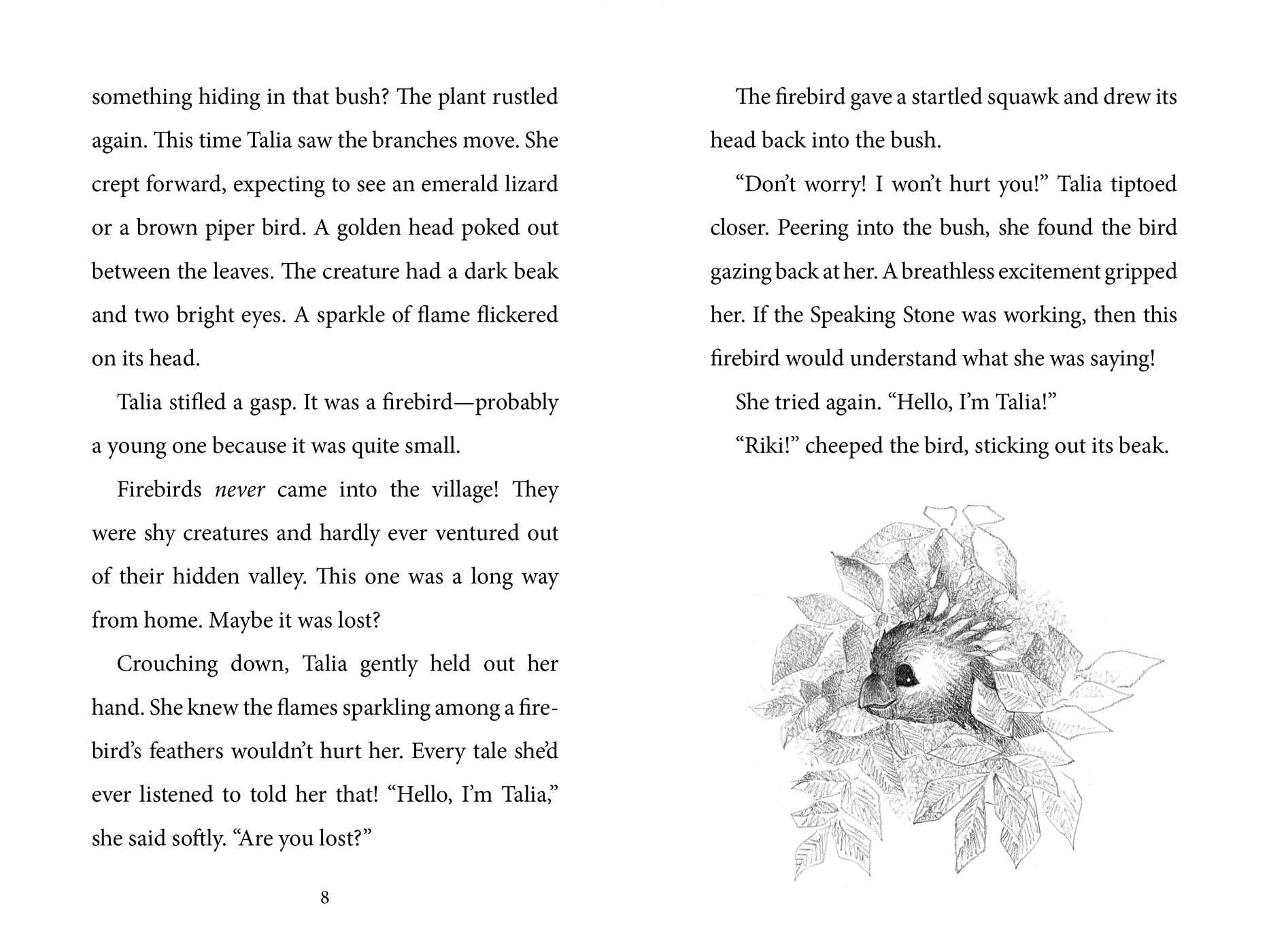 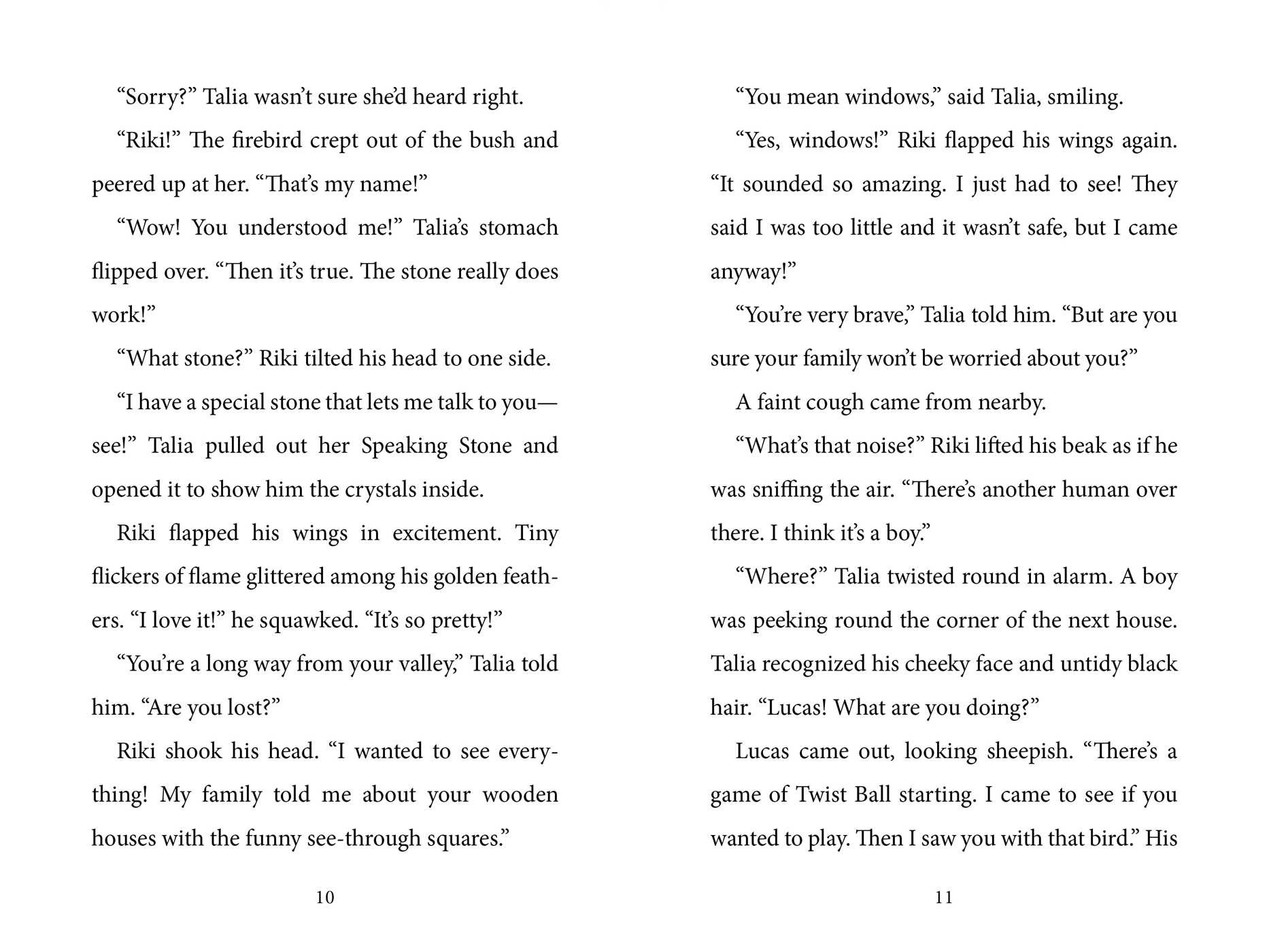 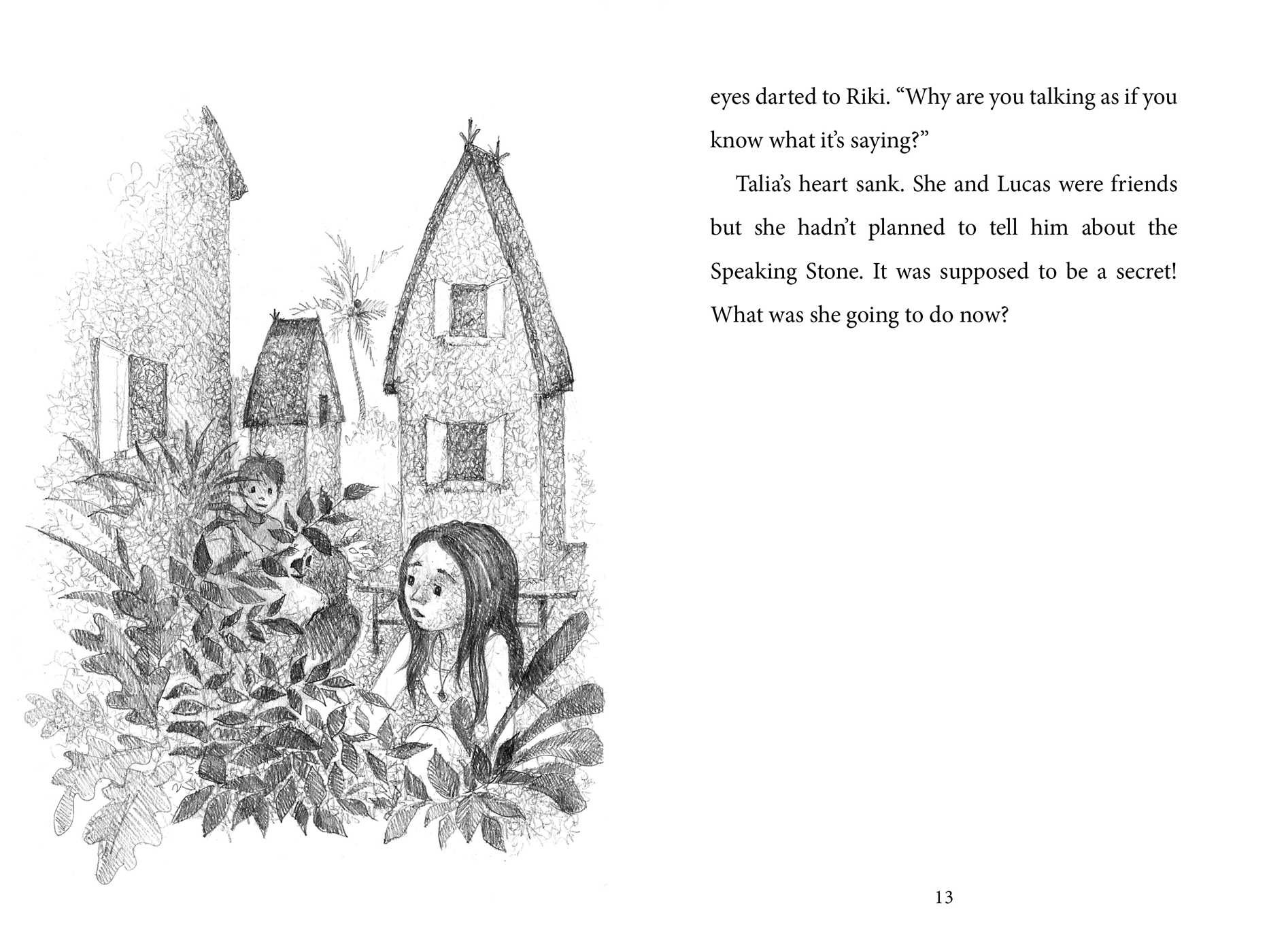 In a land far, far away, a small group of animal lovers work to keep magical creatures safe from the grasp of the evil Sir Fitzroy in this third book in the brand-new Secret Rescuers chapter book series!

Talia lives in a tropical rainforest that is home to a flock of magical firebirds. One day she meets a baby firebird and they become best friends.

But the firebirds are in terrible danger. Can Talia and her friend Lucas protect the firebirds, and save their home from destruction?

The Enchanted Stone
Talia squashed a ball of red-brown clay between her hands. She was sitting on the wooden step in front of her house. Her bright-green dress was smeared with clay and her bare feet were dusty. A row of freshly made cups and plates were drying in the sun beside her.

She squeezed the clay harder. She was going to make a beautiful bowl and later, when it was dry, she’d decorate it. Maybe she’d paint red Izzala flowers on the side. The prettiest bowls always sold well at the market.

She bent her head as she molded the bowl into shape. Her long dark-brown hair fell over her shoulders. The sun beat down and the clay felt warm between her fingers.

In the distance, Talia could hear the sounds of the rain forest. She loved to listen to the calls of the parrots and the scratching of the grasshoppers. Many of the pictures she chose for her pottery came from the plants and animals she’d seen in the forest.

Kura, the village where Talia lived, was in the middle of the Hundred Valleys at the southernmost tip of the Kingdom of Arramia. The little valleys lay side by side, divided by tall mountains and filled with tropical rain forest. Among them was the most secret place of all—the valley of Jalmar, where the magical firebirds lived.

Many enchanted creatures lived in the Kingdom of Arramia. There were dragons, sky unicorns, and star wolves, but many of them lived far away in the north of the country. The firebirds’ valley lay just across the river. Talia often ran down to the water to watch them glide from tree to tree on the opposite bank. Tiny golden flames sparkled on their wings.

Talia knew the flames must be magical, as they never scorched the flowers or leaves. She longed to get closer to the amazing birds, but she knew she mustn’t cross the river. Entering the hidden valley was forbidden. That was the law of her village, and Talia knew the rule had been made to keep the firebirds safe!

Smoothing the rim of the bowl, Talia held it up to check that it looked good all the way round. She placed it next to the other things she’d made and brushed the clay off her hands. Her mind drifted as she gazed at the swaying treetops in the distance. Something so strange and so amazing had happened last week that she could hardly stop thinking about it!

She’d been walking in the rain forest, gathering berries that she could use to make different-colored paints. A rising wind had rocked the trees and a dragon had swooped through the air, landing in a clearing up ahead. Talia had nearly dropped all her berries when she saw a girl with blond braids slip down from the dragon’s back.

Sophy, the dragon-riding girl, had said she’d flown all the way from the royal castle where she worked as a maid. Then she’d given Talia a very special gift—a stone that magically broke open and had sparkling orange crystals inside. It was so beautiful! Talia could hardly believe it was hers.

She put her hand to her neck. Yes, the stone was still safe. She’d tied it on to some thread so that she could wear it as a necklace. It hung beneath her dress where no one could see. The girl on the dragon had told her to keep it a secret. She’d told Talia something else too. Something amazing.

She’d said the stone would let her talk to magical animals.

Talia took out the tiny rock. Her mum had gone to water the vegetables so she was quite alone. Gently opening the stone, she gazed at the little hollow filled with orange crystals. They glittered so brightly they made Talia think of flames.

Could it be true? Could this stone really let her speak to magical creatures?

Sophy had called it a Speaking Stone. She’d also explained that magical animals were in danger from people who wanted to capture them. It had all begun with Sir Fitzroy, a horrible knight who hated the creatures. Talia had listened carefully. She really wanted to help.

Every day since then, Talia had wandered in the rain forest trying to find a magical animal to see if the girl’s promise about the stone was really true. She’d searched and searched but she hadn’t found a single creature, and her mum had told her off for not finishing her chores!

Talia hung the stone around her neck again and began putting on her sandals. The pottery would be dry in two hours. She had enough time for a walk in the forest. As she fastened her buckle, there was a faint rustling noise.

Talia looked up. Had she imagined it or was something hiding in that bush? The plant rustled again. This time Talia saw the branches move. She crept forward, expecting to see an emerald lizard or a brown piper bird. A golden head poked out between the leaves. The creature had a dark beak and two bright eyes. A sparkle of flame flickered on its head.

Talia stifled a gasp. It was a firebird—probably a young one because it was quite small.

Firebirds never came into the village! They were shy creatures and hardly ever ventured out of their hidden valley. This one was a long way from home. Maybe it was lost?

Crouching down, Talia gently held out her hand. She knew the flames sparkling among a firebird’s feathers wouldn’t hurt her. Every tale she’d ever listened to told her that! “Hello, I’m Talia,” she said softly. “Are you lost?”

The firebird gave a startled squawk and drew its head back into the bush.

“Don’t worry! I won’t hurt you!” Talia tiptoed closer. Peering into the bush, she found the bird gazing back at her. A breathless excitement gripped her. If the Speaking Stone was working, then this firebird would understand what she was saying!

“Riki!” cheeped the bird, sticking out its beak.

“Riki!” The firebird crept out of the bush and peered up at her. “That’s my name!”

“Wow! You understood me!” Talia’s stomach flipped over. “Then it’s true. The stone really does work!”

“What stone?” Riki tilted his head to one side.

“I have a special stone that lets me talk to you—see!” Talia pulled out her Speaking Stone and opened it to show him the crystals inside.

Riki flapped his wings in excitement. Tiny flickers of flame glittered among his golden feathers. “I love it!” he squawked. “It’s so pretty!”

“You’re a long way from your valley,” Talia told him. “Are you lost?”

Riki shook his head. “I wanted to see everything! My family told me about your wooden houses with the funny see-through squares.”

“Yes, windows!” Riki flapped his wings again. “It sounded so amazing. I just had to see! They said I was too little and it wasn’t safe, but I came anyway!”

“You’re very brave,” Talia told him. “But are you sure your family won’t be worried about you?”

A faint cough came from nearby.

“What’s that noise?” Riki lifted his beak as if he was sniffing the air. “There’s another human over there. I think it’s a boy.”

“Where?” Talia twisted round in alarm. A boy was peeking round the corner of the next house. Talia recognized his cheeky face and untidy black hair. “Lucas! What are you doing?”
Paula Harrison

Paula Harrison began inventing stories and writing them down as a child, including one about a magical land inhabited by talking bookworms. She lives with her husband and two children in England.

Sophy Williams is the illustrator of the Secret Rescuers series. Visit her online at SophyWilliamsIllustrator.com.

More books in this series: The Secret Rescuers