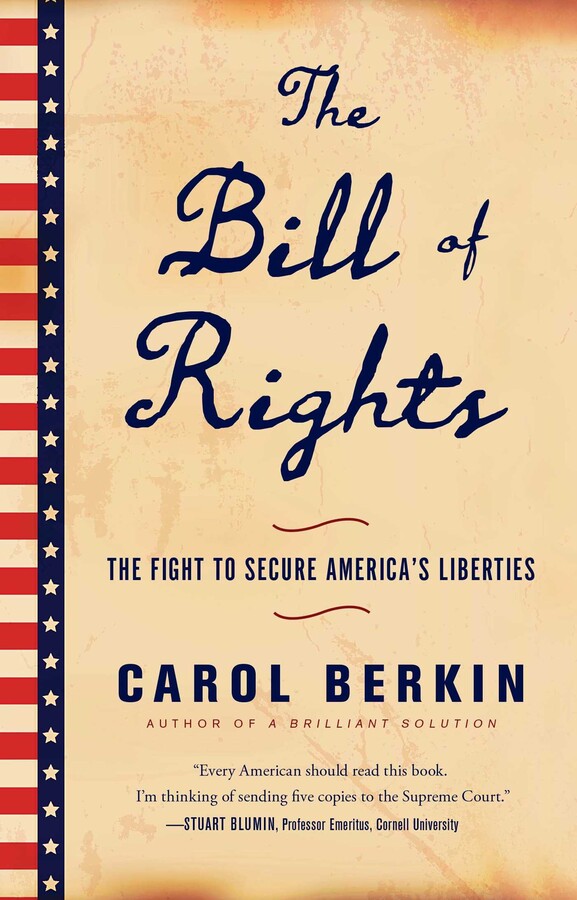 The Bill of Rights

The Fight to Secure America's Liberties

By Carol Berkin
LIST PRICE $13.99
PRICE MAY VARY BY RETAILER

“Narrative, celebratory history at its purest” (Publishers Weekly)—the real story of how the Bill of Rights came to be: a vivid account of political strategy, big egos, and the partisan interests that set the terms of the ongoing contest between the federal government and the states.

Those who argue that the Bill of Rights reflects the founding fathers’ “original intent” are wrong. The Bill of Rights was actually a brilliant political act executed by James Madison to preserve the Constitution, the federal government, and the latter’s authority over the states. In the skilled hands of award-winning historian Carol Berkin, the story of the founders’ fight over the Bill of Rights comes alive in a drama full of partisanship, clashing egos, and cunning manipulation.

In 1789, the nation faced a great divide around a question still unanswered today: should broad power and authority reside in the federal government or should it reside in state governments? The Bill of Rights, from protecting religious freedom to the people’s right to bear arms, was a political ploy first and a matter of principle second. The truth of how and why Madison came to devise this plan, the debates it caused in the Congress, and its ultimate success is more engrossing than any of the myths that shroud our national beginnings.

The debate over the Bill of Rights still continues through many Supreme Court decisions. By pulling back the curtain on the short-sighted and self-interested intentions of the founding fathers, Berkin reveals the anxiety many felt that the new federal government might not survive—and shows that the true “original intent” of the Bill of Rights was simply to oppose the Antifederalists who hoped to diminish the government’s powers. This book is “a highly readable American history lesson that provides a deeper understanding of the Bill of Rights, the fears that generated it, and the miracle of the amendments” (Kirkus Reviews). 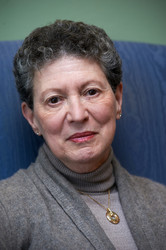 Carol Berkin is the Presidential Professor of History at Baruch College and a member of the history faculty of the Graduate Center of CUNY, Emerita, where she taught early American and women’s history. Professor Berkin has worked as a consultant on several PBS and History Channel documentaries, including one on the “Scottsboro Boys,” which was nominated for an Academy Award as the best documentary of 2000.

“Fluidly written and readily accessible, Carol Berkin's account of the genesis and adoption of the Bill of Rights is a must-read for every American seeking to learn the history of this iconic addition to the Constitution. The narrative of ‘rights’ included and omitted gives us much to ponder, even in the 21st century.”

– Mary Beth Norton, Professor, Cornell University, and author of In the Devil’s Snare: The Salem Witchcraft Crisis of 1692

"Having crafted the definitive volume on the creation of the Constitution in A Brilliant Solution, Carol Berkin here turns her attention to the men who drafted and battled over that document’s first ten amendments. Bristling with vivid insights, packed with colorful tales and personalities, and narrated with her customary verve, The Bill of Rights reaffirms Berkin’s status as one of the most original, vital, and essential historians of the eighteenth century."

"Carol Berkin’s brilliant new book demystifies the Bill of Rights.  In crystal-clear prose it demonstrates that James Madison’s shepherding of the first ten amendments through a reluctant Congress was, above all, a successful strategy for preserving the new Constitution, and with it a viable national government.  Every American should read this book.  I’m thinking of sending five copies to the Supreme Court."

“Carol Berkin unravels the story of our Bill of Rights as only she can. Under her pen the founders come to life—vivid and complex—struggling to meet the challenges of their times. Berkin reveals the intricacy, struggle, political infighting, and self-interest at work in the American political process while celebrating the remarkable and enduring accomplishments of these very human American citizens.”

"With this concise, wonderfully readable, and masterfully crafted book, Carol Berkin has made the eighteenth-century legislative debates over the Bill of Rights accessible and intelligible to the American public. This book should be required reading in every high school and college civics, history, and social studies classroom in America."

"Once again Professor Berkin has given us a beautifully written, insightful history about the intricacies of securing American liberty in her new book The Bill of Rights. Her careful treatment of the political process has produced a profound look into the motives both political and personal of the framers of our government, and the role that each one, especially James Madison, performed in creating and securing American liberty. It is amazing how she has been able to bring to new life a topic that has been so often explored by other historians. Her writing is compelling and clear. The Bill of Rights is a dynamic reexamination of the principal document which is at the foundation of American freedoms."

"Berkin’s well-crafted and readable narrative focusing on the struggle in Congress over the Bill of Rights in the summer of 1789 should be required reading for those who seek to understand the political divisions among the Founding Fathers and the legacy inherited by future generations. Berkin offers an even-handed account of the forces which supported and opposed a Bill of Rights. She introduces us to intelligent and articulate men such as Roger Sherman, Fisher Ames, and Elbridge Gerry—and the omnipresent James Madison—supplementing the volume with interesting short biographies of the members of Congress."

“Berkin is a talented writer. . . . A scholarly and readable book that is excellent for history buffs.”

“A highly readable American history lesson that provides a deeper understanding of the Bill of Rights, the fears that generated it and the miracle of the amendments.”

“This is narrative, celebratory history at its purest.”

The Bill of Rights

The Fight to Secure America's Liberties

By Carol Berkin
LIST PRICE $13.99
PRICE MAY VARY BY RETAILER