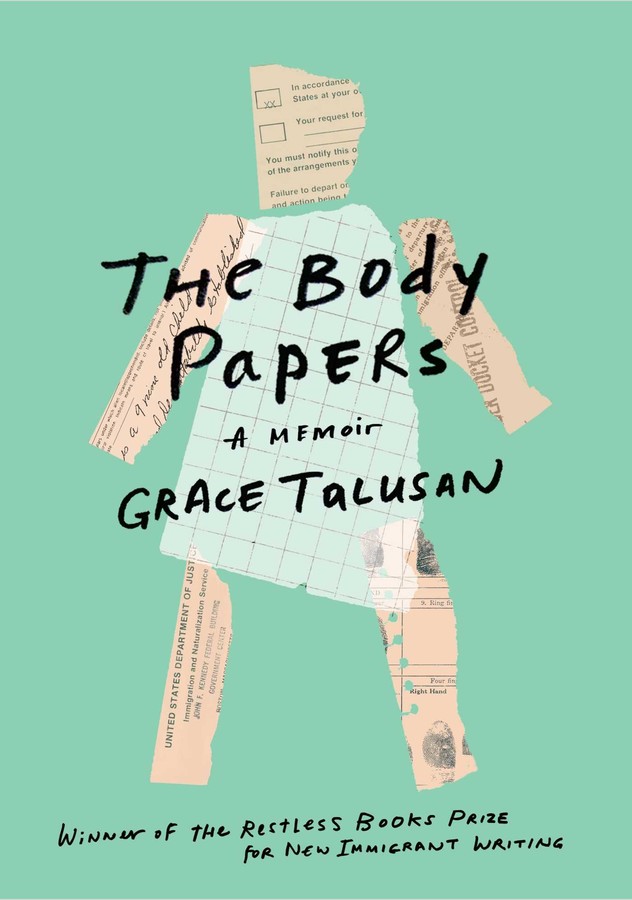 Winner of The Restless Books Prize for New Immigrant Writing, Grace Talusan’s critically acclaimed memoir The Body Papers, a New York Times Editors’ Choice selection, powerfully explores the fraught contours of her own life as a Filipino immigrant and survivor of cancer and childhood abuse.

Born in the Philippines, young Grace Talusan moves with her family to a New England suburb in the 1970s. At school, she confronts racism as one of the few kids with a brown face. At home, the confusion is worse: her grandfather’s nightly visits to her room leave her hurt and terrified, and she learns to build a protective wall of silence that maps onto the larger silence practiced by her Catholic Filipino family. Talusan learns as a teenager that her family’s legal status in the country has always hung by a thread—for a time, they were “illegal.” Family, she’s told, must be put first.

The abuse and trauma Talusan suffers as a child affects all her relationships, her mental health, and her relationship with her own body. Later, she learns that her family history is threaded with violence and abuse. And she discovers another devastating family thread: cancer. In her thirties, Talusan must decide whether to undergo preventive surgeries to remove her breasts and ovaries. Despite all this, she finds love, and success as a teacher. On a fellowship, Talusan and her husband return to the Philippines, where she revisits her family’s ancestral home and tries to reclaim a lost piece of herself.

Not every family legacy is destructive. From her parents, Talusan has learned to tell stories in order to continue. The generosity of spirit and literary acuity of this debut memoir are a testament to her determination and resilience. In excavating such abuse and trauma, and supplementing her story with government documents, medical records, and family photos, Talusan gives voice to unspeakable experience, and shines a light of hope into the darkness.

Grace Talusan is a writer and writing teacher. As a child, she immigrated to the United States from the Philippines with her parents. She has published essays, longform journalism, fiction and book reviews in Brevity, Creative Nonfiction, Boston Magazine, Boston Globe, The Rumpus, and many others. She is the recipient of a U.S. Fulbright Fellowship to the Philippines and an Artist Fellowship Award from the Massachusetts Cultural Council, and has been awarded residencies to Hedgebrook, Ragdale, and the Dune Shacks in Provincetown. She is a graduate of Tufts University and the MFA Program in Writing at the University of California, Irvine. At Tufts University, she teaches in the English Department and The Jonathan M. Tisch College of Civic Life. She is a longtime member and teacher at Grub Street, an independent creative writing center. She lives outside of Boston with her husband.

“Grace Talusan writes eloquently about the most unsayable things: the deep gravitational pull of family, the complexity of navigating identity as an immigrant, and the ways we move forward even as we carry our traumas with us. Equal parts compassion and confession, The Body Papers is a stunning work by a powerful new writer who—like the best memoirists—transcends the personal to speak on a universal level.”

– Celeste Ng, author of Everything I Never Told You and Little Fires Everywhere

“There is so much to admire in this brave and fierce and deeply intimate memoir. By taking such an unsentimental and plainspoken approach to her material, Talusan simply demands that the reader pay attention. The Body Papers is told in thematic sequences in which the author and the family come continually to light, in flashes that get brighter as we read, and by the end we see everyone in their full humanity and comprehend the depths of both despair and love at their core. As a child of immigrants, I found much to relate to in the family dynamics—alternately laughing and shuddering with recognition.”

“[A] precise, delicately constructed memoir-in-essays…. The Body Papers doesn’t track a one-way march to triumph from adversity; Talusan’s essays loop in on themselves, as she retrieves old memories and finds unexpected points of connection…. Talusan describes such experiences with unadorned prose that conveys a startling specificity…. Such commentary, while righteous and earned, is not the point of this indelible book. Talusan has the instincts of a storyteller, teasing out her narrative through images and allusion.”

“The Body Papers is an extraordinary portrait of the artist as survivor. From a legacy of trauma and secrecy spanning oceans and generations, Grace Talusan has crafted a wise, lucid, and big-hearted stand against silence—a literary lifeline for all who have endured profound pain and hope to be seen and loved through it.”
—Mia Alvar, author of In the Country

“Grace Talusan’s finely-wrought and eloquent memoir, The Body Papers, was the winner of the Restless Books Prize for New Immigrant Writing. The book is visceral, bodily, and throbs with pain and trauma — sexual abuse by a family member, cancer, the phantom-limb ache of an outsider in a foreign land, and later, as an outsider in the homeland. In less skilled hands, it all might be too much to bear, but Philippines-born Talusan ... brings us along in spare, specific, sense-rich detail, and reveals, along the way, the power to be found in giving a name to the unnamable, in giving language to subjects and experiences that defy it. Therein, Talusan shows, one can find the possibility of healing what’s happened in the past, as well as moving into the future with gratitude, wisdom, and strength.”
—Nina MacLaughlin, The Boston Globe

“A Filipino-American writer's debut memoir about how she overcame a personal history fraught with racism, sexual trauma, mental illness, and cancer …. Moving and eloquent, Talusan's book is a testament not only to one woman's fierce will to live, but also to the healing power of speaking the unspeakable. A candidly courageous memoir.”

“Grace Talusan makes use of immigration papers, legal certificates, and medical test results in her memoir about immigration, trauma, and illness. The winner of the Restless Books Prize for New Immigrant Writing for Nonfiction, The Body Papers is timely and compelling.”
—R. O. Kwon, Electric Literature

“Grace Talusan’s The Body Papers is one of the fiercest and most intimate books I have ever read. It is a memoir of immigration, of multiculturalism, of family betrayals and loving binds, and deeply a memoir of the body: about the documents and silences that regulate it, and the memories and emotions that live inside it. Talusan has written an urgent and necessary testament for our time. Reading it left me raw. Reading it will change you.”

—Alex Marzano-Lesnevich, author of The Fact of a Body: A Murder & A Memoir

“In this moving, clear-eyed memoir, which won the Restless Books Prize for New Immigrant Writing, she probes the events of her life, documenting them with photographs and official papers. She involves the reader in her quest to make sense of who she has become by charting where she’s been…. The portrait Talusan creates of her father, Totoy, is one of the most complex and beautiful parts of the book…. Talusan is still working on healing. It’s clear that telling her story with such openness and perceptiveness, is part of that ongoing process.”

“In The Body Papers, Grace Talusan takes us to the space between what official documents say and what the body's cells know—the understated prose startles with its beauty, the insights it provides are priceless.”
—Marie Myung-Ok Lee, author of Somebody's Daughter

“This gorgeous, slim memoir is about so many things—being in a body that survives immigration, violence, cancer… this memoir will peel you back sentence after sentence, leaving your nerve endings grateful for the body that wrote it.”
—Mira Jacob, author of Good Talk and The Sleepwalker’s Guide to Dancing

“But what renders the book memorable — perhaps what earned it the Restless Books Prize for New Immigrant Writing — is the author’s unstinting self-portrait…. At the doctor’s office, she weeps for the children she will never have, assuaged only by the unshakable love between her and her husband. In such powerful, evocative scenes as this one, The Body Papers comes fully alive. Now a lecturer at Tufts University, Talusan chronicles that fraught passage from one world, one body, to another, marking with sensitivity how an American life can be both burden and benediction.”