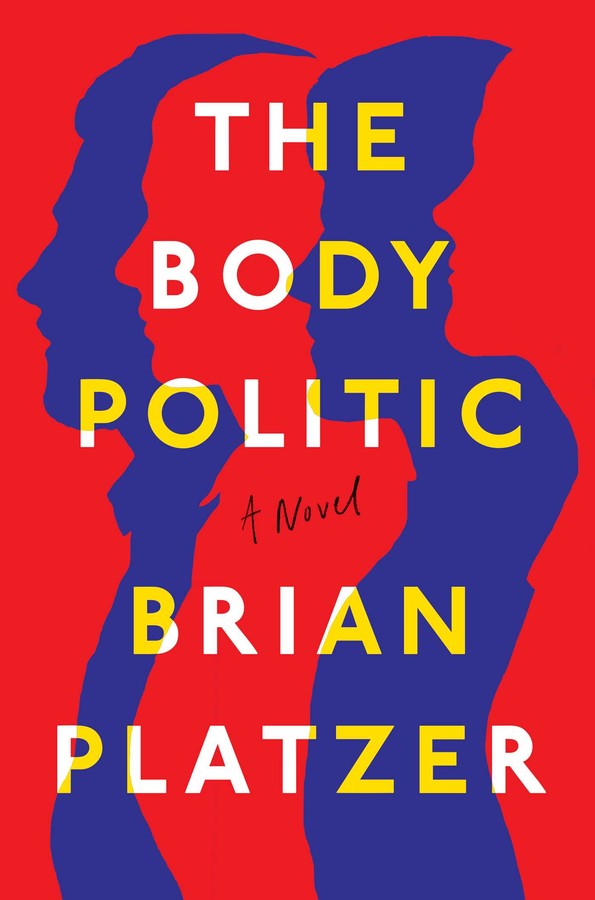 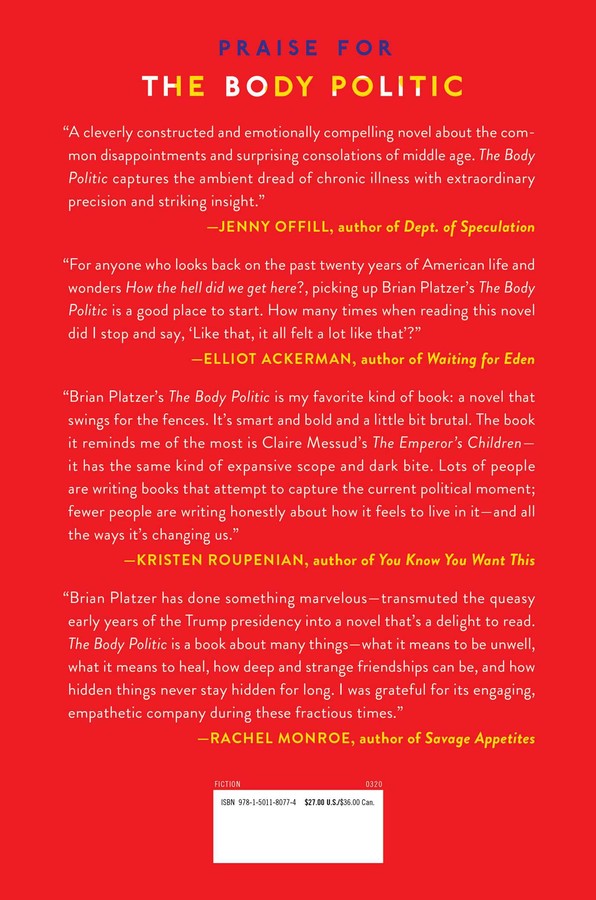 In the bestselling tradition of The Interestings and A Little Life, this keenly felt and expertly written novel by the author of the “savvy, heartfelt, and utterly engaging” (Alice McDermott) Bed-Stuy Is Burning follows four longtime friends as they navigate love, commitment, and forgiveness while the world around them changes beyond recognition.

New York City is still regaining its balance in the years following 9/11, when four twenty-somethings—Tess, Tazio, David, and Angelica—meet in a bar, each yearning for something: connection, recognition, a place in the world, a cause to believe in. Nearly fifteen years later, as their city recalibrates in the wake of the 2016 election, their bond has endured—but almost everything else has changed.

As freshmen at Cooper Union, Tess and Tazio were the ambitious, talented future of the art world—but by thirty-six, Tess is married to David, the mother of two young boys, and working as an understudy on Broadway. Kind and steady, David is everything Tess lacked in her own childhood—but a recent freak accident has left him with befuddling symptoms, and she’s still adjusting to her new role as caretaker.

Meanwhile, Tazio—who once had a knack for earning the kind of attention that Cooper Union students long for—has left the art world for a career in creative branding and politics. But in December 2016, fresh off the astonishing loss of his candidate, Tazio is adrift, and not even his gorgeous and accomplished fiancée, Angelica, seems able to get through to him. With tensions rising on the national stage, the four friends are forced to face the reality of their shared histories, especially a long-ago betrayal that has shaped every aspect of their friendship.

Elegant and perceptive, The Body Politic explores the meaning of commitment, the nature of forgiveness, the way that buried secrets will always find their way to the surface, and how all of it can shift—and eventually erupt—over the course of a life.

Chapter 1 1
Water tumbles down the black marble wall and slaps flat against the floor in time with the music. When the music speeds up, so do the pulses of water, falling, slapping, and disappearing as the next pulse falls and slaps. Tess watches it. Sips her vodka. She tries to block out everything but the water. Is it possible she sees dirt in it? Could the water not be filtered? Why, she sighs, would it be? But still, the room is dark and she must be ten feet away from the wall. Those would have to be large chunks of dirt in that water for her to see them. The music speeds up. The dirty water falls faster. It hesitates only briefly now at the wall’s top lip before it falls. Tess is drunk. High. Thirty-seven years old. She feels strong. She dances in self-contained fluid movements along with the filthy falling water and the crowd around her. The music, pot, vodka, dirty water, and wall nearly fill her mind to capacity. Or nearly empty it. Nearly. She holds her glass by her thigh. She sways to the music. Nobody is looking at her, so she dares herself to drop the glass, and she does! She watches it fall, clenches for the shatter and shards, but it bounces, rolls, and settles onto the marble floor. She’s disappointed. The music slows, but the others keep dancing around her. She tries to forget the glass. There’s no falling water, then the music surges, and the water falls again.

Tess leans against the bar, waiting for another drink. She thinks she recognizes a man in the bar mirror and freezes, but it’s no one. A stranger. It would be fun to run into someone who could tell her what the show was like—what she was missing. They could dance together! It’s not like she’s doing anything wrong. There are powers beyond her control that have made her drop out of her dream role weeks before opening night. She’s got no secrets. She’s only had three vodka tonics. And the giant bag of weed. But forget her life onstage. Forget everything but the music.

The club is bright with white lights scanning the dancers, bars, water walls, candles, and bronze cages hanging from the sky. Dancers inside the cages wear animal masks. Their muscles are oiled to their bikini lines. One is a tiger. Another is a moose. A moose? Mooses aren’t sexy. Mooses? Moose. Tess forces her way to the middle of the large dance area beneath a caged man dancing in his underwear and a tiger mask. Tess roars up at him, and, farther away, across the deafening music and crowd of a thousand, the moose impossibly roars back.

It’s late but Tess wants to keep going. She hasn’t done it yet, truly forgotten, had the moment she’d set out for. Once, when Tess was a girl, without her mother there to watch her, she started on one side of a big open field, stared at the sun, and ran as fast as she could with her eyes wide open. Eyes, legs, and lungs raced to see which would fail first. The field went on far longer than she could have run. Nobody else was around. The sun was bright, and her eyes were burning, but so were her lungs and her legs. She was outside herself, recognizing, at seven or eight years old, the pain in the various parts of her body, and curious, as though a bystander, about which part would stop working before the others. She twisted an ankle, stumbled, screamed, but kept running. Tears blurred her vision, and she gasped for air. But she kept running. She wouldn’t stop. She’d have to physically break before she stopped.

She woke up hours later in bed with washcloths on her wrists, her aunt pacing by the door. And to this day she doesn’t know what happened. Which part of herself failed her? Which part let her down?

Tess rushes the remainder of her drink into her mouth. The ice clicks cold against her teeth. She’s failing at forgetting. At manufacturing another out-of-body experience.

A tightrope walker is crossing between cages. Tess is dancing in the middle of everyone. The music is building and thickening. Tess opens her eyes to better feel the boys and girls jump along with her, up and down and up, banging against her arms but gently. Tess wants to yell, so she yells. She wants to fly up to the cages and grab the tightrope and swing up into the lights. She wants to live in the moment, in the light. To forget the past and the future—and live only in the teasing, itching present. And for a moment, maybe five, ten seconds, there she is: thirty-seven years old, scratching, blooming, and on fire.

Brian Platzer has an MFA from the Johns Hopkins Writing Seminars, and a BA from Columbia University. His writing has appeared often in The New Yorker’s “Shouts and Murmurs” and McSweeney’s “Internet Tendency,” as well as in The New York Times, The New Republic, Salon, and elsewhere. He lives with his wife and two young sons in Bed-Stuy, Brooklyn, and teaches middle school English in Manhattan. He is the author of the novels Bed-Stuy Is Burning and The Body Politic.

“For anyone who looks back on the past twenty years of American life and wonders how the hell did we get here, picking up Brian Platzer’s The Body Politic is a good place to start. How many times when reading this novel did I stop and say, ‘Like that, it all felt a lot like that.’” —Elliot Ackerman, author of Waiting for Eden

“Brian Platzer has done something marvelous — transmuted the queasy early years of the Trump presidency into a novel that’s a delight to read. The Body Politic is a book about many things — what it means to be unwell, what it means to heal, how deep and strange friendships can be, and how hidden things never stay hidden for long. I was grateful for its engaging, empathetic company during these fractious times.” —Rachel Monroe, author of Savage Appetites

"Brian Platzer's The Body Politic is my favorite kind of book: a novel that swings for the fences. It's smart and bold and a little bit brutal.  The book it reminds me of the most is Claire Messud's The Emperor's Children—it has the same kind of expansive scope, and dark bite.  Lots of people are writing books that attempt to capture the current political moment; fewer people are writing honestly about how it feels to live in it - and all the ways it's changing us." —Kristen Roupenian, author of You Know You Want This

“A cleverly constructed and emotionally compelling novel about the common disappointments and surprising consolations of middle age. The Body Politic captures the ambient dread of chronic illness with extraordinary precision and striking insight.” —Jenny Offill, author of Dept. of Speculation

“Platzer's (Bed-Stuy is Burning, 2018) second novel is about four friends in their thirties in New York City. But The Body Politic is bold in other ways. Firmly set in the almost-present aftermath of the 2016 election, it's propelled by real-world headlines.” —Booklist

Praise for Bed-Stuy is Burning:

“Platzer’s take on race, religion, class, and politics—all the subjects you’re not supposed to discuss—is sure to get people talking.” —Vanity Fair

“Riveting, full of cliffhanger chapter endings and surprise twists… Mr. Platzer deftly swivels among the clashing points of view, and the climax, in which Aaron returns to disperse the crowd with an improvised sermon, is powerfully done.” —Wall Street Journal

"Brian Platzer's first novel captures a violent day in the uneasy life of a gentrifying Brooklyn neighborhood where the fragility of love, parenthood, class and race is put to the test. A bad day in Bed-Stuy is a vivid microcosm of the United States, but the hope Platzer suggests with his characters' healthy unmasking offers optimism for the whole country's days ahead." —Shelf Awareness

“A debut novel about class conflict, race and gentrification. Reminiscent of Bonfire of the Vanities.” —New York Post

"Platzer, a writer and educator who lives in Bed-Stuy, is aiming high here, addressing race-related violence, the Black Lives Matter movement, gentrification, and other volatile topics. He succeeds in presenting multiple perspectives of dramatic yet familiar situations." —Booklist

“[A] dramatic first novel… the prose is energetic, and Platzer is obviously committed to exploring these contemporary urban issues.” —Library Journal

“Platzer clearly knows his turf. A Bed-Stuy resident himself, he convincingly sketches out how thin the neighborhood's peaceful veneer is.” —Minneapolis Star Tribune

"Brian Platzer's first novel is a savvy, heartfelt and utterly engaging examination of gentrification, love, race, ambition, money, parenthood and even faith. A Bonfire of the Vanities for millennials, it is a marvelous, and daring, debut." —Alice McDermott, National Book Award-winning author of Charming Billy