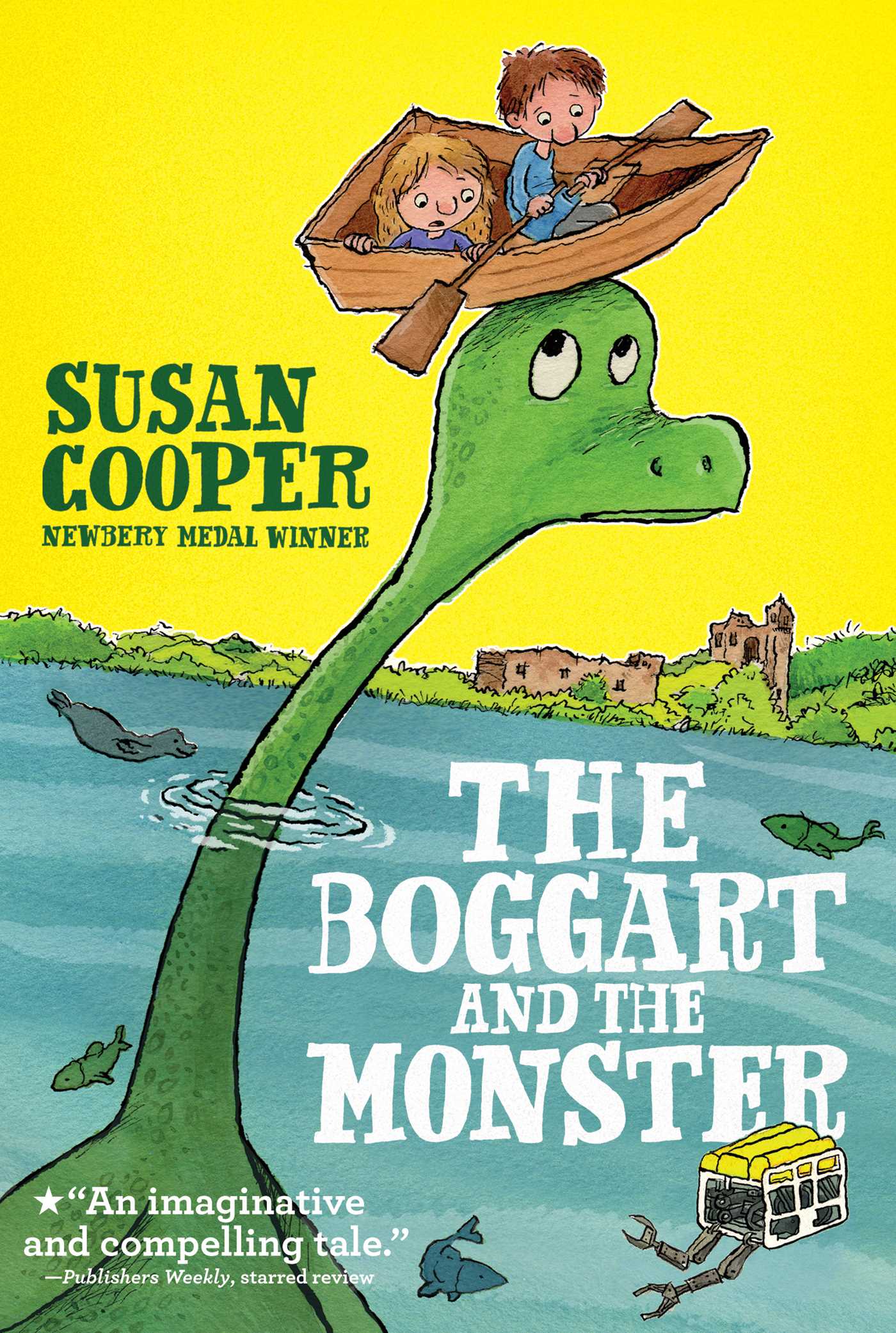 The Boggart and the Monster

Part of The Boggart
By Susan Cooper
LIST PRICE $8.99
PRICE MAY VARY BY RETAILER

When the Scottish owner of Castle Keep died, the ancient castle went to his Canadian great-nephew, Robert Volnik. There was no way the Volniks could keep the castle, so it was sold to an Edinburgh lawyer, Mr. Maconochie. Two years later, Emily Volnik and her younger brohter Jessup return to the castle for a visit. To their delight, the Boggart, a mischievous shape-shifting spirit who has lived in the castle for centures, playing tricks on the owners, is still there, making Mr. Mac coubt his won sanity as strange things happen.
At Jessup's urging, Mr. Mac takes them and Tommy Cameron, a local friend, on a comping trip to Loch Ness, Where a new expedition with advanced underwater equipment is planning another search for the Loch Ness Monster. The boggart comes along, and, on thier first night there, he is entranced to rediscover Nessie, a boggart cousin who has long forgotten how to change shape and remains in the prehistoric-monster form he long ago adopted.
Beautifully imagined and beautifully written, this is an unforgettable adventure, filled with humor, suspense, and wonderful characters. It is a stunning companion to Susan Cooper's earlier book, The Boggart.

“As long as writers with Susan Cooper’s skill continue to publish,” The New York Times observed, “magic is always available.” And magic—the magic of the old ways and the modern wizardry of our new technologies—is at the heart of this distinguished pair of fantasies. In their first adventure, The Bogart, Emily Volnik and her brother Jessup inadvertently transport an ancient spirit from his ancestral castle in Scotland all the way to their home in Toronto. A mischievous creature, mostly invisible but also able to shape-shift at will, the boggart gleefully runs amok amongst the gadgetry of his new world—until he realizes how much he misses his old one. “A lively story,” announced School Library Journal in its starred review, “compelling from first page to last, and a good bet for a read aloud.” Its equally acclaimed sequel, The Boggart and the Monster, finds the boggart back in Scotland, trying to revive the magical powers of his long-lost cousin, the Loch Ness monster. “The play has plenty of sparkling complications,” wrote Booklist. “The clever premise and great characters will leave kids clamoring for more.”

1. Early on in The Boggart, the creature is described as “one of the Old Things of the world, he was not made for human warmth… A boggart, by his nature, feels warmth for no one.” Yet this boggart also seems very human, even childlike, at times. What are some of the emotions he experiences? How do his emotional attachments and needs guide his behavior?
2. Why are most of the adults depicted in these novels reluctant to believe that the boggart exists? Would you also be skeptical? Why or why not?
3. The boggart is stung when Emily asks him to avoid getting her and her brother into trouble in The Boggart. “Didn’t the girl know that boggarts live for mischief, not for harm?” What is the difference between mischief and harm? Does the boggart always understand the difference? Do you or your friends?
4. How could the boggart and the MacDevon clan, which includes modern day members Emily and Jessup Volnick, be related to each other? What is the old legend that links them?
5. Boggarts never die. What are the advantages of immortality? What are the disadvantages?
6. Even though he is an ancient creature, the boggart has a special affinity for computers. Jessup speculates that is because both the computer and the boggart are primarily made up of electrical impulses. What do you think? Could there be other reasons for the boggart’s attraction to computers?
7. In his second adventure, the boggart seems more willing to communicate with humans. How does he do it? Why does he do it? Does he trust humans more? Does he need them more?
8. In The Boggart, the modern world is described as “a world which had driven out the Old Things and buried the Wild Magic deep under layers of reason and time.” Do you believe this is an accurate depiction of modern life? Do you think “Wild Magic” has been buried? Do you think it ever existed?

• In both novels, the boggart’s antics capture the overheated attention of the media. Take note of how the media cover big stories in your community. Do you think the coverage is fair and factual? Do you think some stories get too much attention? Why?
• On a map, track Emily and Jessup Volnick’s journeys back and forth from Toronto to the west coast of Scotland. Be sure to include their stopovers in London and Edinburgh. If possible, work with a travel agent to map out exact itineraries by air, train, and road.
• What would happen if the boggart visited your home or school? Would it be fun, disastrous, or a little of both? Write an original story.
• The boggart sometimes communicates with humans in Gaelic. Find out more about this ancient language. In what countries or regions was it spoken? What language largely replaced Gaelic? Why? Try to find written examples of the language.
• Imagine that you are a drama critic for a Toronto newspaper. Write a review of the extraordinary performance of Shakespeare’s Cymbeline that occurs in The Boggart.
• Emily and Jessup Volnik are from Canada, yet they are sometimes mistaken for U.S. citizens when they are in Scotland. The children are quick to point out their proper nationality. Research some of the social and cultural differences between the United States and Canada. Though the two countries have a long history of friendly relations, are there also points of disagreement? Which country has a stronger link to Scotland and the rest of the United Kingdom? Why?
• Prepare a feast fit for a boggart. Be sure to include a sampling of all his favorite foods—old treats as well as newfound delights.


This guide has been provided by Simon & Schuster for classroom, library, and reading group use. It may be reproduced in its entirety or excerpted for these purposes.

Susan Cooper is one of our foremost children’s authors; her classic five-book fantasy sequence The Dark Is Rising has sold millions of copies worldwide. Her many books have won the Newbery Medal, a Newbery Honor, and the Boston Globe-Horn Book Award, and been shortlisted five times for the Carnegie Medal. She combines fantasy with history in Victory (a Washington Post Top Ten for Children novel), King of Shadows and Ghost Hawk, and her magical The Boggart and the Monster, second in a trilogy, won the Scottish Arts Council’s Children’s Book Award. Susan Cooper lives on a saltmarsh island in Massachusetts, and you can visit her online at TheLostLand.com.

The Boggart and the Monster

Part of The Boggart
By Susan Cooper
LIST PRICE $8.99
PRICE MAY VARY BY RETAILER

More books in this series: The Boggart