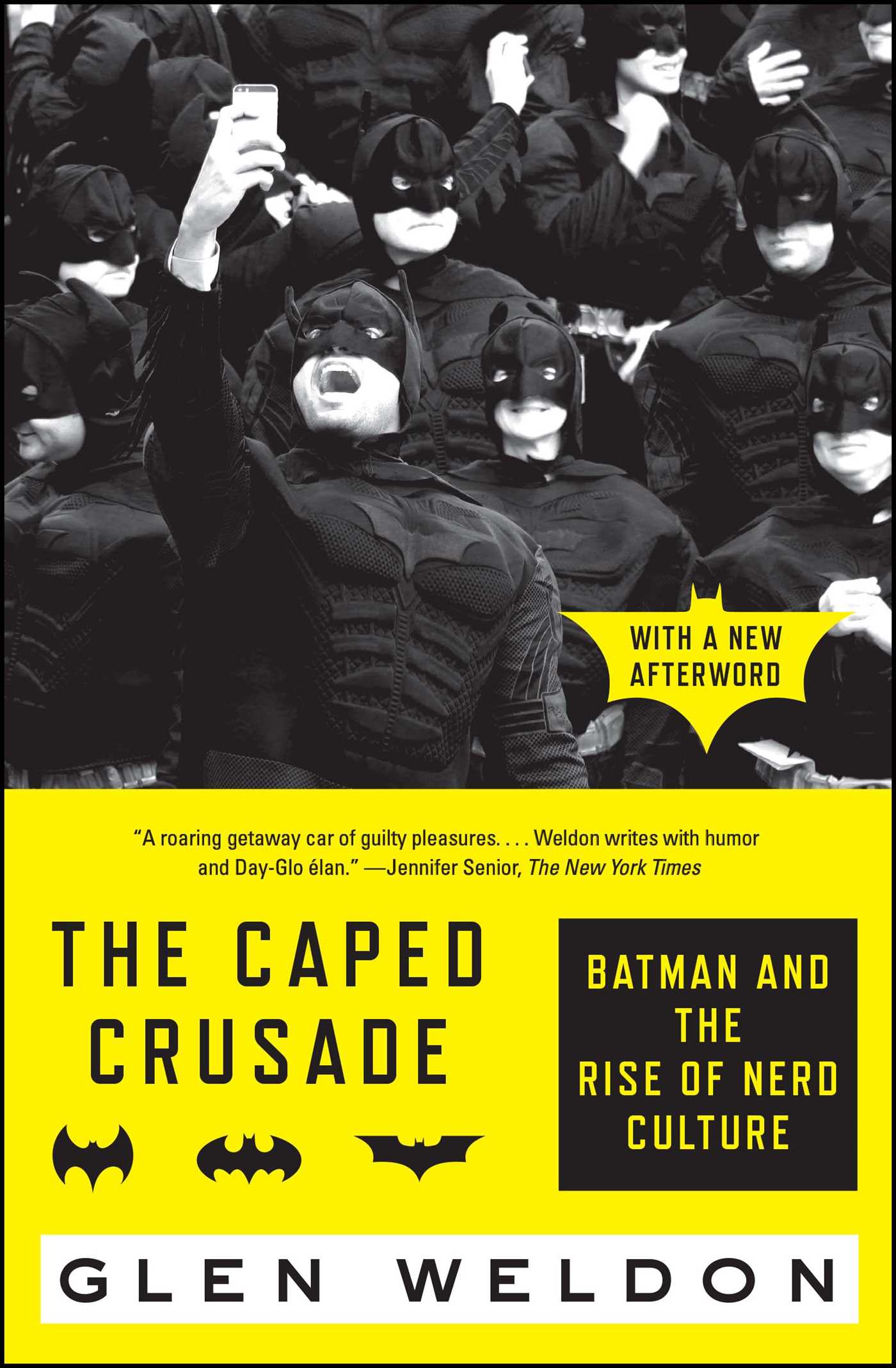 Batman and the Rise of Nerd Culture

By Glen Weldon
LIST PRICE $16.99
PRICE MAY VARY BY RETAILER

“A roaring getaway car of guilty pleasures” (The New York Times Book Review), Glen Weldon’s The Caped Crusade is a fascinating, critically acclaimed chronicle of the rises and falls of one of the world’s most iconic superheroes and the fans who love him—now with a new afterword.

Since his debut in Detective Comics #27, Batman has been many things: a two-fisted detective; a planet-hopping gadabout; a campy Pop Art sensation; a pointy-eared master spy; and a grim ninja of the urban night. Yet, despite these endless transformations, he remains one of our most revered cultural icons. In this “smart, witty, and engrossing” (The Wall Street Journal) cultural critique, NPR contributor and book critic Glen Weldon provides “a sharp, deeply knowledgeable, and often funny look at the cultural history of Batman and his fandom” (Chicago Tribune) to discover why it is that we can’t get enough of the Dark Knight.

For nearly a century, Batman has cycled through eras of dark melodrama and light comedy and back again. How we perceive his character, whether he’s delivering dire threats in a raspy Christian Bale growl or trading blithely homoerotic double entendres with Robin the Boy Wonder, speaks to who we are and how we wish to be seen by the world. It’s this endless adaptability that has made him so lasting, and ultimately human.

But it’s also Batman’s fundamental nerdiness that uniquely resonates with his fans and makes them fiercely protective of him. As Weldon charts the evolution of Gotham’s Guardian from Bob Kane and Bill Finger’s hyphenated hero to Christopher Nolan’s post-9/11 Dark Knight, he reveals how this symbol of justice has made us who we are today and why his legacy remains so strong. The result is “possibly the most erudite and well-researched fanboy manifesto ever” (Booklist). Well-researched, insightful, and engaging, The Caped Crusade, with a new afterword by the author, has something for everyone: “If you’re a Bat-neophyte, this is an accessible introduction; if you’re a dyed-in-the-Latex Bat-nerd, this is a colorfully rendered magical history tour redolent with nostalgia” (The Washington Post). 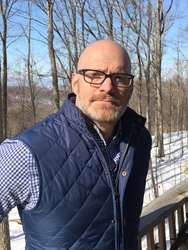 Glen Weldon has been a theater critic, a science writer, an oral historian, a writing teacher, a bookstore clerk, a movie usher, a PR flack, an inept marine biologist, and a slightly-better-than-ept competitive swimmer. His work has appeared in The New York Times, The Washington Post, The New Republic, Slate, The Atlantic, The Village Voice, The Philadelphia Inquirer, and many other places. He is a panelist on NPR’s Pop Culture Happy Hour and reviews books and comic books for NPR.org. The author of Superman: The Unauthorized Biography and The Caped Crusade: Batman and the Rise of Nerd Culture, he lives in Washington, DC.

"The Caped Crusade is a great read for those who are proud Gothamites, those less initiated, and those who flip the switch on the Bat-Signal in order to find themselves. . . .A sharp, deeply knowledgeable and often funny look at the cultural history of Batman and his fandom...both a page-turner and a Riddler Trophy." —Chicago Tribune

“Engaging. . . . What Weldon ultimately achieves here is a character and comic-franchise history that is itself flexible enough to become what the reader needs it to be. If you’re a Bat-neophyte, this is an accessible introduction; if you’re a dyed-in-the-Latex Bat-nerd, this is a colorfully rendered magical history tour redolent with nostalgia.” —The Washington Post

"For fans of Gotham’s Batman, this is the perfect book to pick up before you head to the movie. . . . Even casual fans will find themselves quickly turning pages to learn more about how our comic heroes affect and even shape our everyday lives." —Bookish

"[The Caped Crusade] accomplishes what so many supervillains, from The Joker to Bane, have long desired to do: pin down Batman and systematically dissect him. Weldon navigates Batman's history with an expert step...a winning mix of humor, and incisive social analysis. Even his footnotes are funny. Under that famous cowl, he sees ugliness, wonder, and the undercurrents of pop culture in all their conflicting glory." —NPR

"Writing a book about Batman is tricky. He is a cultural icon deeply meaningful to many because his story touches on themes of loss, adversity and perseverance. Also, he is an implausible character who defies laws of physics and common sense every time he swoops on gun-blazing lunatics. Weldon successfully walks the tightrope, showing reverence for the character but keeping it fun." —Associated Press

"Sprawling in scope, yet written with breezy flair. . .An enthusiastic, immersive, entertaining guide for both die-hard Batfans and curious onlookers." —Kirkus Reviews

“The Caped Crusade is breezy, insightful, and surprisingly moving. Glen Weldon is the illuminating, hilarious writer Batman deserves—and the one we need right now.” —DC Pierson, author of The Boy Who Couldn’t Sleep and Never Had To and Crap Kingdom

"The Caped Crusade: Batman and the Rise of Nerd Culture doesn’t read like a history book, and it’s not just due to the author’s fantastic storytelling. Weldon informs the reader of the history of Batman with a passion that can be found in any tried and true Batman fan and with a level of knowledge I’ve never encountered before. It is the book that Gotham City deserves, and I can’t recommend it enough." —ComicsVerse

“Weldon, a critic for NPR, offers possibly the most erudite and well-researched fanboy manifesto ever.” —Booklist

“There's no better time to stop, relax, take a breath and read NPR critic Glen Weldon's history of Batman…Because here, in these entertaining pages, you will discover that nerd rage over the Dark Knight is nothing new.” —Mashable (Geek Book of the Week)

“[A] smart, engaging dissection of Batman’s pulpy comic-book roots, his rise to campy ’60s TV stardom, his takeover of toy shelves and his resurrection as the dark knight of the silver screen.” —Parade

“Sinkinginto the pages of ‘The Caped Crusade’ is the next-best thing to debating who’sthe better Batman.” —Detroit Free Press

"Anyone familiar with Weldon’s frequent NPR appearances will delight in this book’s near-perfect translation of his verbal and comedic sensibilities. Its tone is reverent and analytical, acknowledging the absurdities of Batman and celebrating its wondrous appeal in equal measure." —DCist

“If you looked at Glen Weldon’s utility belt, you’d find wit, humor & endless knowledge about Batman. Thankfully he's condensed that utility belt into a book where you will learn the origin, the ups, the downs and the sideways of one of the most iconic bat-based superheroes of all time.” —Kumail Nanjiani, comedian and star of HBO’s Silicon Valley

“This is the hero’s journey of Batman from a raw idea of a character to a cornerstone of pop culture. Weldon pulls the back the cowl and reveals us—creators, performers and fans—all collaborating to shape a modern myth that bends with the times to endure. Once I started, I kept reading every chance I got.” —Jeff Parker, writer of BATMAN ’66

Batman and the Rise of Nerd Culture

By Glen Weldon
LIST PRICE $16.99
PRICE MAY VARY BY RETAILER