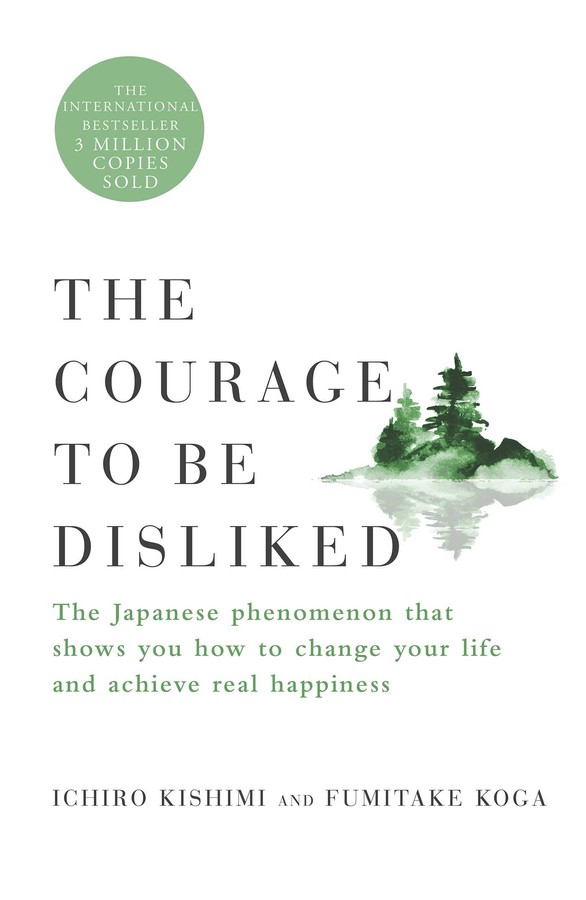 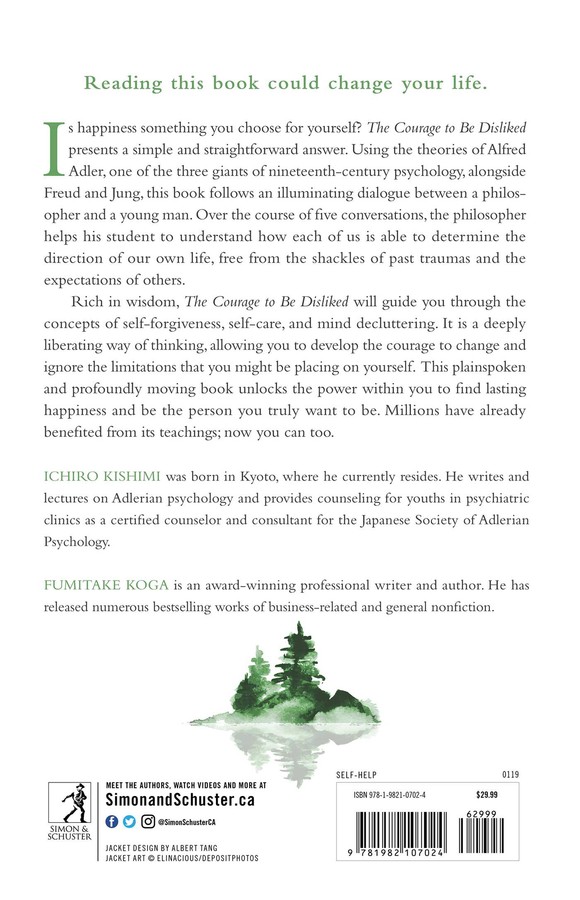 The Courage to Be Disliked

The Life-Changing Magic of Tidying Up for the mind, The Courage to Be Disliked is the Japanese phenomenon that shows you how to free yourself from the shackles of past experiences and others’ expectations to achieve real happiness.

The Courage to Be Disliked, already an enormous bestseller in Asia with more than 3.5 million copies sold, demonstrates how to unlock the power within yourself to be the person you truly want to be.

Using the theories of Alfred Adler, one of the three giants of twentieth century psychology, this book follows an illuminating conversation between a philosopher and a young man. The philosopher explains to his pupil how each of us is able to determine our own life, free from the shackles of past experiences, doubts, and the expectations of others. It’s a way of thinking that is deeply liberating, allowing us to develop the courage to change, and to ignore the limitations that we and those around us have placed on ourselves. The result is a book that is both highly accessible and profound in its importance. Millions have already read and benefitted from its wisdom.

This is a truly special book in the vein of Marie Kondo’s The Life-Changing Magic of Tidying Up but for the mind. Those ready to embrace the insights and liberation promised by The Courage to Be Disliked will come to a deeper understanding of themselves and others, and find the inspiration to take the reins of their own life.

The Courage to Be Disliked Introduction
YOUTH: I want to ask you once again; you do believe that the world is, in all ways, a simple place?

PHILOSOPHER: Yes, this world is astonishingly simple and life itself is, too.

YOUTH: So, is this your idealistic argument or is it a workable theory? What I mean is, are you saying that any issues you or I face in life are simple too?

YOUTH: Alright then, but let me explain why I have come to visit you today. Firstly, I want to debate this with you until I am satisfied, and then, if possible, I want to get you to retract this theory.

YOUTH: Because I have heard all about your reputation. The word is that there is an eccentric philosopher living here whose teachings and arguments are hard to ignore, namely, that people can change, that the world is simple and that everyone can be happy. That is the sort of thing I have heard, but I find that view totally unacceptable, so I wanted to confirm things for myself. If I find anything you say completely off, I will point it out and then correct you . . . But will you find that annoying?

PHILOSOPHER: No, I would welcome the opportunity. I have been hoping to hear from a young person just like you and to learn as much as possible from what you can tell me.

YOUTH: Thanks. I do not intend to dismiss you out of hand. I will take your views into consideration and then look at the possibilities that present themselves. ‘The world is simple and life is simple, too’—if there is anything in this thesis that might contain truth, it would be life from a child’s point of view. Children do not have any obvious duties, like paying taxes or going to work. They are protected by their parents and society, and can spend days free from care. They can imagine a future that goes on forever and do whatever they want. They don’t have to see grim reality—they are blindfolded. So, to them the world must have a simple form. However, as a child matures to adulthood the world reveals its true nature. Very shortly, the child will know how things really are and what he is really allowed to do. His opinion will alter and all he will see is impossibility. His romantic view will end and be replaced by cruel realism.

PHILOSOPHER: I see. That is an interesting view.

YOUTH: That’s not all. Once grown up, the child will get entangled in all kinds of complicated relationships with people and have all kinds of responsibilities thrust upon him. That is how life will be, both at work and at home, and in any role he assumes in public life. It goes without saying that he will become aware of the various issues in society that he couldn’t understand as a child, including discrimination, war, and inequality, and he will not be able to ignore them. Am I wrong?

PHILOSOPHER: It sounds fine to me. Please continue.

YOUTH: Well, if we were still living at a time when religion held sway, salvation might be an option because the teachings of the divine were everything to us. All we had to do was obey them and consequently have little to think about. But religion has lost its power and now there is no real belief in God. With nothing to rely on, everyone is filled with anxiety and doubt. Everyone is living for themselves. That is how society is today, so please tell me—given these realities and in the light of what I have said—can you still say the world is simple?

PHILOSOPHER: There is no change in what I say. The world is simple and life is simple, too.

YOUTH: How? Anyone can see that it’s a chaotic mass of contradictions.

PHILOSOPHER: None of us live in an objective world, but instead in a subjective world that we ourselves have given meaning to. The world you see is different from the one I see, and it’s impossible to share your world with anyone else.

YOUTH: How can that be? You and I are living in the same country, in the same time, and we are seeing the same things—aren’t we?

PHILOSOPHER: You look rather young to me, but have you ever drunk well water that has just been drawn?

YOUTH: Well water? Um, it was a long time ago, but there was a well at my grandmother’s house in the countryside. I remember enjoying the fresh, cold water drawn from that well on a hot summer’s day.

PHILOSOPHER: You may know this, but well water stays at pretty much the same temperature all year round, at about sixty degrees. That is an objective number—it stays the same to everyone who measures it. But when you drink the water in the summer it seems cool and when you drink the same water in the winter it seems warm. Even though it’s the same water, at the same sixty degrees according to the thermometer, the way it seems depends on whether it’s summer or winter.

YOUTH: So, it’s an illusion caused by the change in the environment.

PHILOSOPHER: No, it’s not an illusion. You see, to you, in that moment, the coolness or warmth of the well water is an undeniable fact. That’s what it means to live in your subjective world. There is no escape from your own subjectivity. At present, the world seems complicated and mysterious to you, but if you change, the world will appear more simple. The issue is not about how the world is, but about how you are.

PHILOSOPHER: Right . . . It’s as if you see the world through dark glasses, so naturally everything seems dark. But if that is the case, instead of lamenting about the world’s darkness, you could just remove the glasses. Perhaps the world will appear terribly bright to you then and you will involuntarily shut your eyes. Maybe you’ll want the glasses back on, but can you even take them off in the first place? Can you look directly at the world? Do you have the courage?

YOUTH: Well, alright. There are tons of objections I would like to raise, but I get the feeling it would be better to go into them later. I would like to confirm that you are saying ‘people can change’, right?

PHILOSOPHER: Of course people can change. They can also find happiness.

YOUTH: Everyone, without exception?

YOUTH: Ha-ha! Now you’re talking big! This is getting interesting. I’m going to start arguing with you immediately.

PHILOSOPHER: I am not going to run away or hide anything. Let’s take our time debating this. So, your position is ‘people cannot change?’

YOUTH: That’s right, they can’t change. Actually, I am suffering myself because of not being able to change.

PHILOSOPHER: And at the same time, you wish you could.

YOUTH: Of course. If I could change, if I could start life all over again, I would gladly fall to my knees before you. But it could turn out that you’ll be down on your knees before me.

PHILOSOPHER: You remind me of myself during my own student days, when I was a hot-blooded young man searching for the truth, traipsing about, calling on philosophers . . .

YOUTH: Yes. I am searching for the truth. The truth about life.

PHILOSOPHER: I have never felt the need to take in disciples and have never done so. However, since becoming a student of Greek philosophy and then coming into contact with another philosophy, I have been waiting for a long time for a visit from a young person like you.

YOUTH: Another philosophy? What would that be?

PHILOSOPHER: My study is just over there. Go into it. It’s going to be a long night. I will go and make some hot coffee.

Ichiro Kishimi was born in Kyoto, where he currently resides. He writes and lectures on Adlerian psychology and provides counseling for youths in psychiatric clinics as a certified counselor and consultant for the Japanese Society of Adlerian Psychology. He is the translator, into Japanese, of selected writings by Alfred Adler—The Science of Living and Problems of Neurosis—and he is the author of Introduction to Adlerian Psychology, in addition to numerous other books.

Fumitake Koga is an award-winning professional writer and author. He has released numerous bestselling works of business-related and general non-fiction. He encountered Adlerian psychology in his late twenties and was deeply affected by its conventional wisdom–defying ideas. Thereafter, Koga made numerous visits to Ichiro Kishimi in Kyoto, gleaned from him the essence of Adlerian psychology, and took down the notes for the classical “dialogue format” method of Greek philosophy that is used in this book.

The Courage to Be Disliked