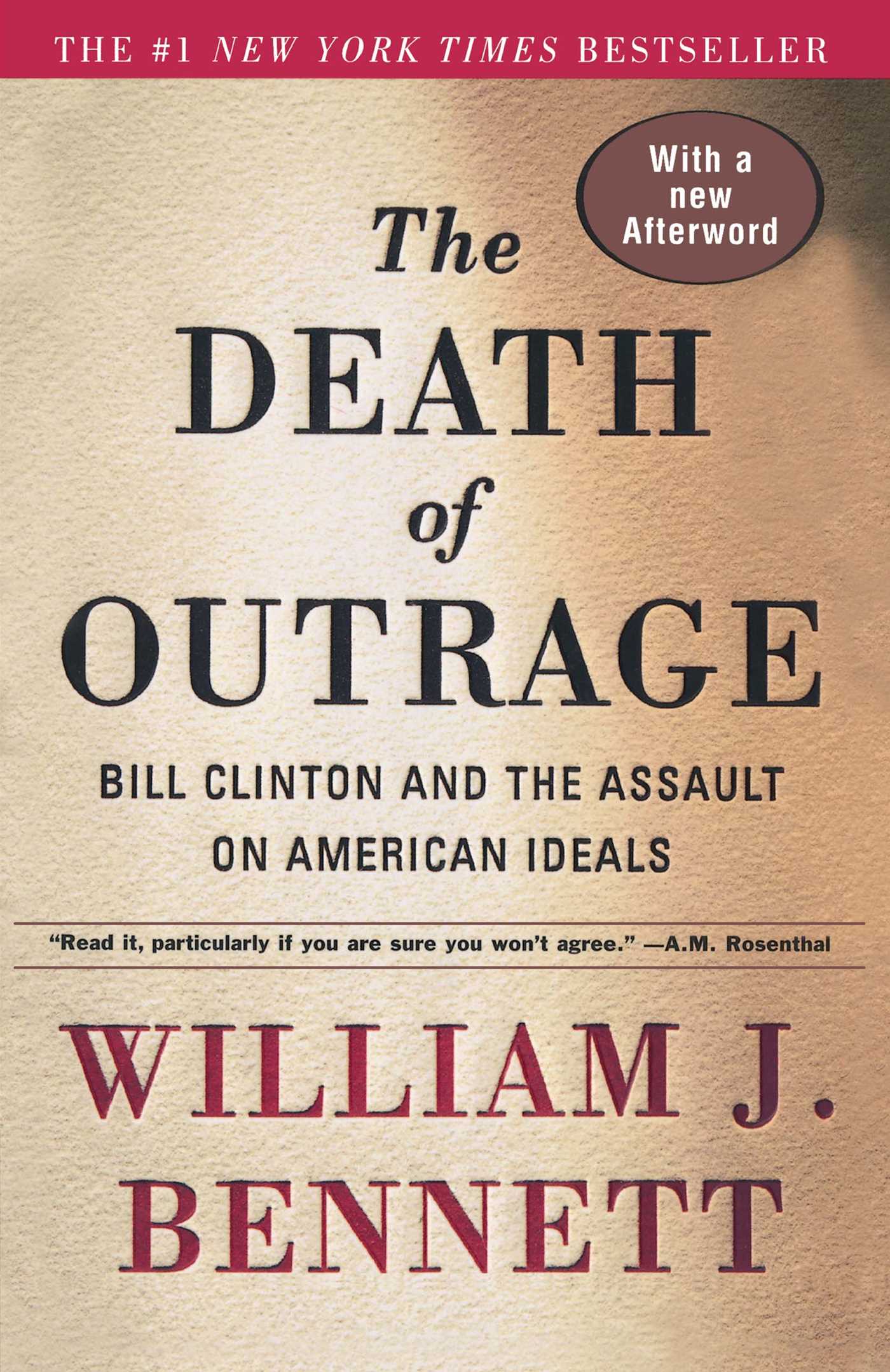 The Death of Outrage

Bill Clinton and the Assault on American Ideals

Today we see little public outrage about Bill Clinton's misconduct. With enormous skill, the president and his advisors have constructed a defensive wall built of bricks left over from Watergate: diversion, half-truth, equivocation, and sophistry. It is a wall that has remained unbreached. Until now.
In The Death of Outrage: Bill Clinton and the Assault on American Ideals, former cabinet secretary and bestselling author William J. Bennett dismantles the president's defenses, brick by evasive brick, and analyzes the meaning of the Clinton scandals: why they matter, what the public reaction to them means, and the social and political damage they have already inflicted on America. For, despite Bill Clinton's position in public opinion polls, the most persuasive public arguments made by the president's supporters wither under the clear light of moral reason and common sense. The Death of Outrage exposes the fallacious and demeaning logic that argues our economic well-being is the only important measure of presidential performance; torpedoes the deep but wholly unexamined respect for European sophistication about "private matters"; and explains why the president's troubles are not the result of a "vast, right-wing conspiracy," but are the result of his own doings. The Death of Outrage shows


Bill Bennett explains why presidential character matters; why allegations of sexual misconduct need to be taken seriously; why reasoned judgment is the mark of a healthy democracy; and why the ends don't justify the means.
Explosive and hard-hitting, powerful in its logic, carefully reasoned in its conclusions, The Death of Outrage is directed at a shameful chapter of American history. It is an urgent call for American citizens to repudiate the deep corruption of Bill Clinton, and the corrupting arguments made in his defense.

William J. Bennett served as Director of the Office of National Drug Control Policy under President George H. W. Bush and as Secretary of Education and Chairman of the National Endowment for the Humanities under President Reagan. He holds a bachelor of arts degree in philosophy from Williams College, a doctorate in political philosophy from the University of Texas, and a law degree from Harvard. He is the author of such bestselling books as The Educated Child, The Death of Outrage, The Book of Virtues, and the two-volume series America: The Last Best Hope. Dr. Bennett is the former host of the nationally syndicated radio show Bill Bennett's Morning in America and the current host of the popular podcast, The Bill Bennett Show. He is also the Washington Fellow of the Claremont Institute and a regular contributor to CNN. He, his wife, Elayne, and their two sons, John and Joseph, live in Maryland.

A.M. Rosenthal Read it, particularly if you are sure you won't agree.

Thomas Shull The Detroit News A bold and necessary act of civic courage, one that will be remembered in years to come.

U.S. News & World Report A piercing commentary on the Moinca Lewinsky scandal and a defining event within it.

The Death of Outrage

Bill Clinton and the Assault on American Ideals

SEE ALL
See more by William J. Bennett
Thank you for signing up, fellow book lover!