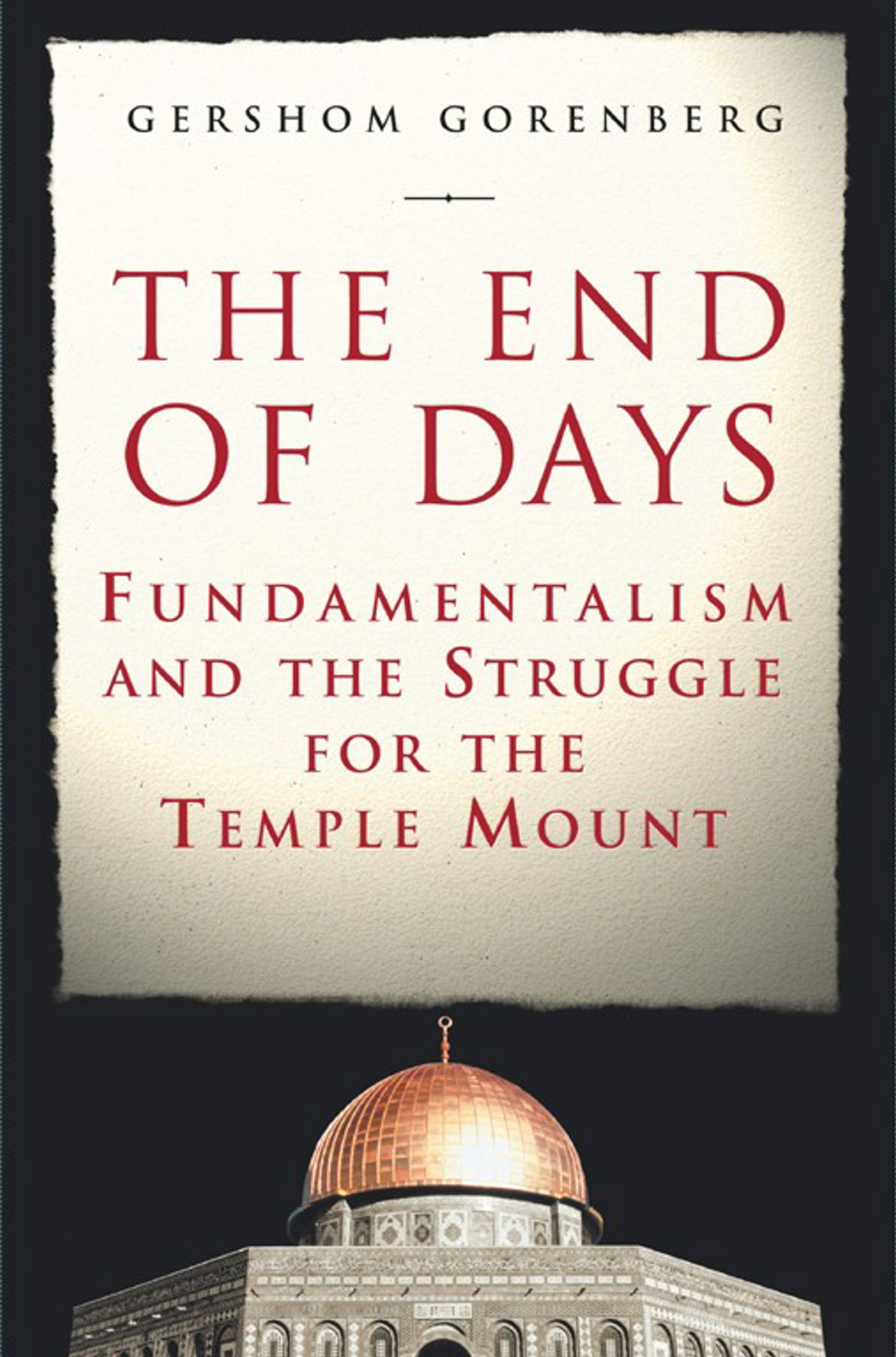 Fundamentalism and the Struggle for the Temple Mount

By Gershom Gorenberg
LIST PRICE $19.99
PRICE MAY VARY BY RETAILER

The new millennium dawned quietly, defying modern-day prophets of apocalypse. Yet for countless believers around the globe ­- Christians, Jews and Muslims -- anticipation that the world is about to end burns more intensely than ever. God's kingdom is near, they believe, and the key to salvation is Jerusalem's Temple Mount, -- the most sacred and contested real estate on earth. In The End of Days, leading Israeli journalist Gershom Gorenberg portrays how such faith has fueled the real-world struggle in the Middle East and reveals why, even in times of peacemaking, it continues to be a powerful catalyst for conflict.
Adroitly portraying former-hippies-turned-true-believers, American radio evangelists of the End, radical Palestinian sheikhs, and Israeli ex-terrorists, Gorenberg weaves a story that stretches from California churches to West Bank settlements. He explains why believers hope for the End, and why prominent American fundamentalists provide hard-line support for Israel, while looking forward to an apocalypse in which they expect Jews to die or else convert. He makes sense of the messianic fervor that has driven Israeli settlers to oppose peace, and describes the Islamic apocalyptic visions that cast Israel's actions in Jerusalem as diabolic plots. He examines, as well, what happens when secular politicians try to channel these religious passions for their own purposes.
At the center of this story is the Temple Mount, where Solomon and Herod built their Temples, where the Dome of the Rock now stands -- and where both Jewish extremists and millions of Christian fundamentalists expect the Third Temple to be built soon. Holy to both Judaism and Islam, the Mount is where nationalism and faith join in a volatile mix. Any attempt to spark the End by clearing the ground for the Temple, therefore, could ignite holy war. This book explains the Mount's dangerous fascination for fundamentalists, and shows why the risks will actually increase in the new millennium ­ as prophesied dates pass and believers look for a way to ensure that the End comes.
Cain murdered Abel, according to an ancient legend, in an argument over who would possess the Temple Mount. That parable sums up the passions aroused by the sacred hilltop. The End of Days shows, with clarity and poise, how conflict over Jerusalem is rooted not only in the past but even more in expectations of the future, and how the fiery belief in apocalypse has a very real impact on contemporary life and international politics.

Peter Benairt, Editor The New Republic Few American journalists understand evangelical theology well enough to explain the Christian Right, few Israeli journalists take messianic Zionism seriously enough to explain the right-wing settlers, and few of either investigate Islam as more than a caricature. Gershom Gorenberg has the intellectual depth and journalistic curiosity to do all three, and as a result, his warnings chill the bone.

Anne Roiphe Author of Lovingkindness and Fruitful This is an amazing book; it made me fear for our future. Gershom Gorenberg brings new information and a clear perspective to the issues of religious extremism and the settlement problem in Israel, and brought it all to life with wonderful portraits of real people. The End of Days reads like a novel but describes religious visions that most closely resemble nightmares. It is an important alarm, calling out to all those who are concerned with the human capacity for unreason as well as the fate of Jerusalem.

Jackson Diehl Assistant managing editor, The Washington Post The End of Days is a clear-eyed and compelling account of the messianists, would-be prophets, and adventurers who have fixed their sights on Jerusalem's holy places. Gorenberg's first-hand encounters with Jewish, Christian, and Muslim fundamentalists offer a wake-up call to those who have discounted the potential of Jerusalem¹s radical fringe to explode any hopes for peace in the city.

Brenda E. Brasher, Ph.D. Co-Chair, New Religious Movements Group of the American Academy of Religion, and author of Godly Women and Give Me That Online Religion Gershom Gorenberg's The End of Days is a stunning achievement. It concisely depicts how one small landmass in Jerusalem is ground zero for the end-times dreams and the fears of three world religions: Judaism, Christianity, and Islam. With eerie ease, Gorenberg brings people who think the world is about to end so close they seem like one's next-door neighbors. He deftly portrays how American and Israeli politicians and religious leaders court the support of radical religious subgroups while ignoring how their actions fuel apocalyptic violence. No one has ever presented people awash with apocalyptic fever more credibly. Extremely well-written and absorbing, this book will be keenly appreciated by thoughtful and aware people throughout America and the Middle East.

Fouad Ajami, Majid Khadduri Professor of Middle East Studies, Johns Hopkins University and author of The Dream Palace of the Arabs. Gershom Gorenberg is a writer of great talent and subtlety. The End of Days is at once compelling analysis and beautiful writing. The Passions of Jerusalem are given a rare and dazzling treatment. This is an exceptional book. It reads like a thriller, while illuminating the modern conflicts that swirl around the city.

Fundamentalism and the Struggle for the Temple Mount

By Gershom Gorenberg
LIST PRICE $19.99
PRICE MAY VARY BY RETAILER