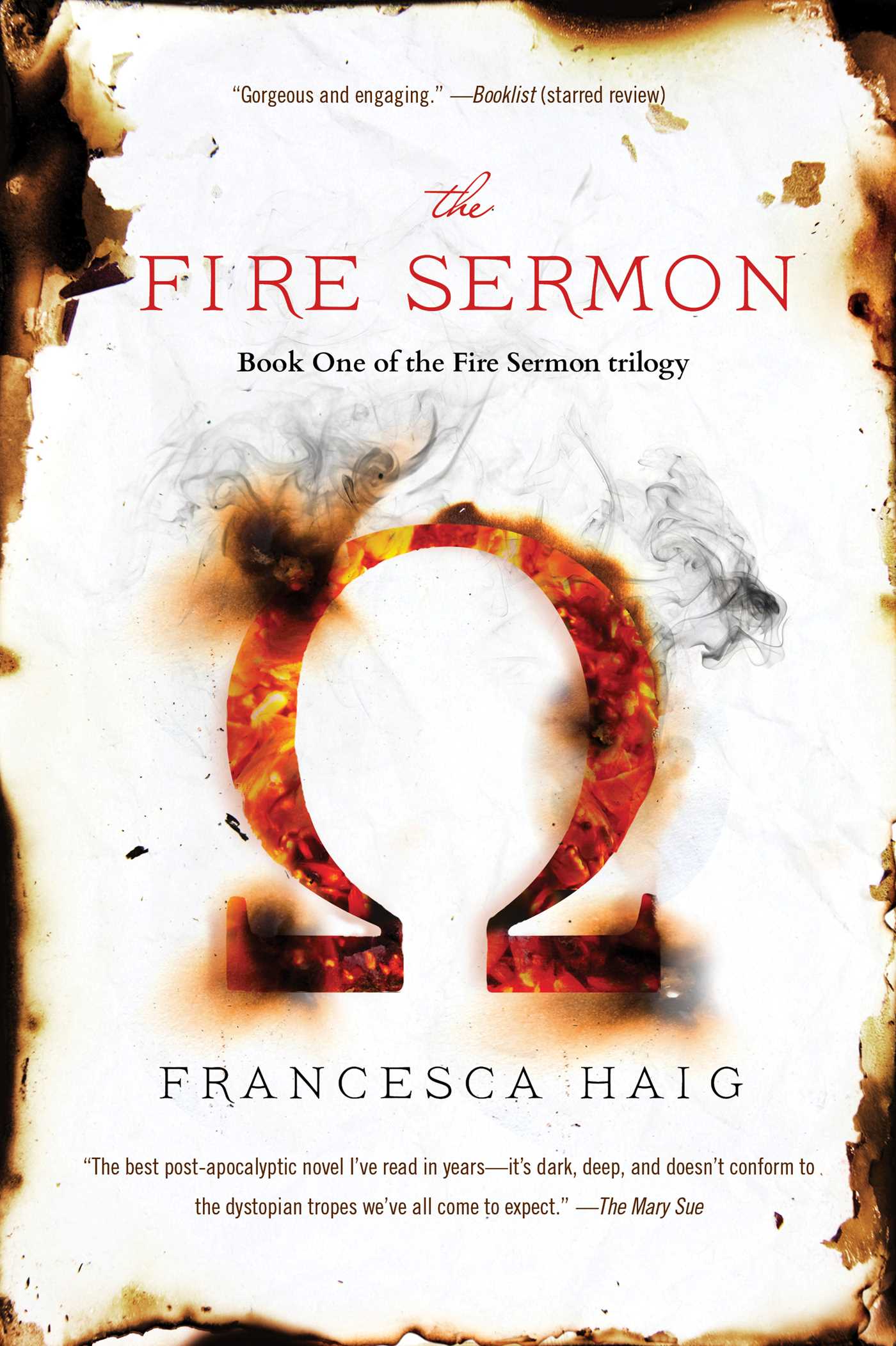 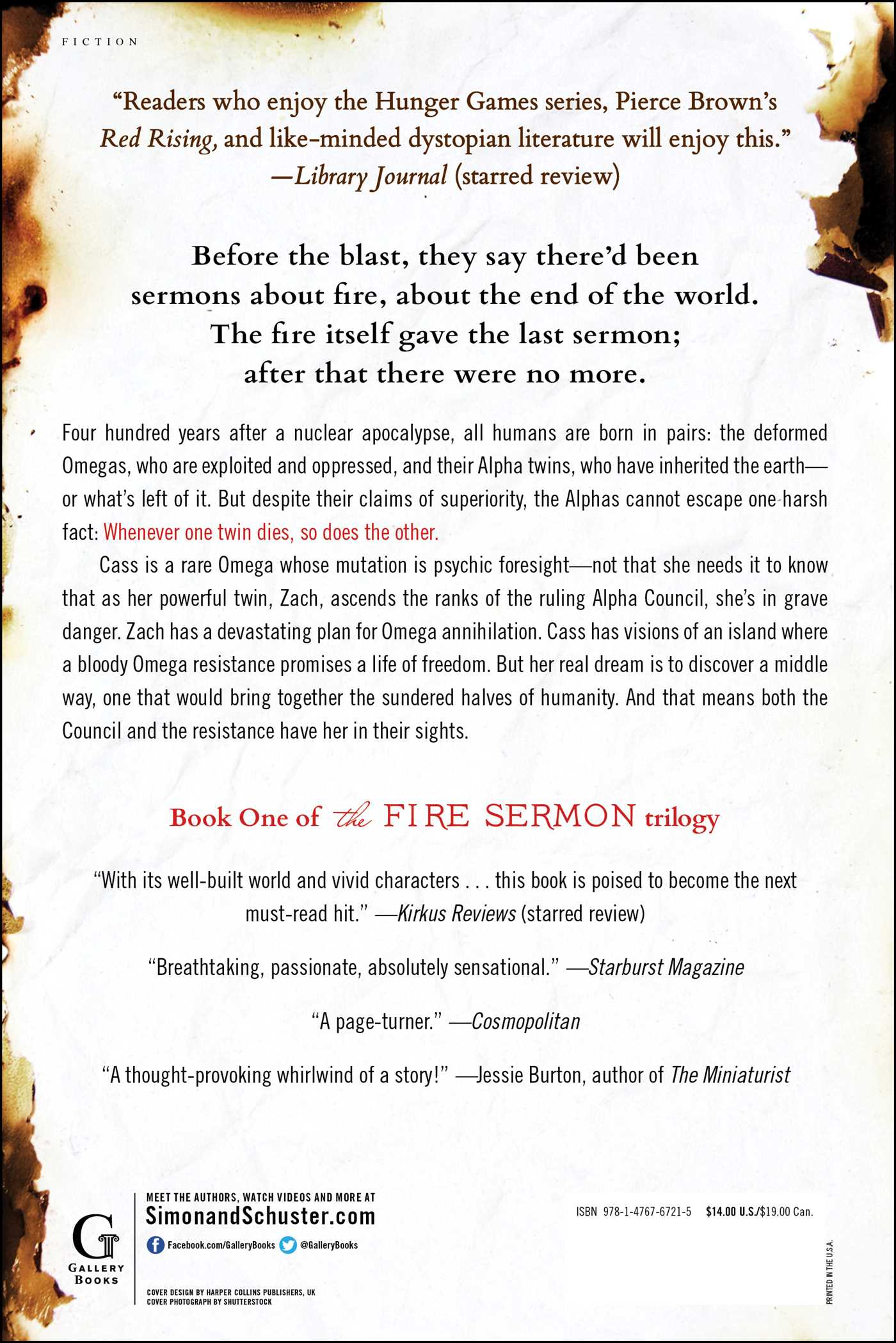 Four hundred years after a nuclear apocalypse, all humans are born in pairs: the deformed Omegas, who are exploited and oppressed, and their Alpha twins, who have inherited the earth—or what’s left of it. But despite their claims of superiority, the Alphas cannot escape one harsh fact: whenever one twin dies, so does the other.

Cass is a rare Omega whose mutation is psychic foresight—not that she needs it to know that as her powerful twin, Zach, ascends the ranks of the ruling Alpha Council, she’s in grave danger. Zach has a devastating plan for Omega annihilation. Cass has visions of an island where a bloody Omega resistance promises a life of freedom. But her real dream is to discover a middle way, one that would bring together the sundered halves of humanity. And that means both the Council and the resistance have her in their sights. But is she alone in her idealism that they can live peacefully side-by-side with the twins? And what will they do when they learn who her brother is?

I’d always thought they would come for me at night, but it was the hottest part of the day when the six men rode onto the plain. It was harvest time; the whole settlement had been up early and would be working late. Decent harvests were never guaranteed on the blighted land permitted to Omegas. Last season, heavy rains had released deeply buried blast-ash in the earth. The root vegetables had come up tiny, or not at all. A whole field of potatoes grew downward—we found them, blind-eyed and shrunken, five feet under the mucky surface. A boy drowned digging for them. The pit was only a few yards deep, but the clay wall gave way and he never came up. I’d thought of moving on, but all the valleys were rain-clogged, and no settlement welcomed strangers in a hungry season.

So I’d stayed through the bleak year. The others swapped stories about the drought, when the crops had failed three years in a row. I’d only been a child then, but even I remembered seeing the carcasses of starved cattle, sailing the dust fields on rafts of their own bones. But that was more than a decade ago. This won’t be as bad as the drought years, we said to one another, as if repetition would make it true. The next spring, we watched the stalks in the wheat fields carefully. The early crops came up strong, and the long, engorged carrots we dug that year were the source of much giggling among the younger teenagers. From my own small plot I harvested a fat sack of garlic, which I carried to market in my arms like a baby. All spring I watched the wheat in the shared fields growing sturdy and tall. The lavender behind my cottage was giddy with bees and, inside, my shelves were loaded with food.

It was midharvest when they came. I felt it first. Had been feeling it, if I were honest with myself, for months. But now I sensed it clearly, a sudden alertness that I could never explain to anybody who wasn’t a seer. It was a feeling of something shifting: like a cloud moving across the sun, or the wind changing direction. I straightened, scythe in hand, and looked south. By the time the shouts came, from the far end of the settlement, I was already running. As the cry went up and the six mounted men galloped into sight, the others ran, too—it wasn’t uncommon for Alphas to raid Omega settlements, stealing anything of value. But I knew what they were after. I knew, too, that there was little point in running. That I was six months too late to heed my mother’s warning. Even as I ducked under the fence and sprinted toward the boulder-strewn edge of the settlement, I knew they would get me.

They barely slowed to grab me. One simply scooped me up as I ran, snatching the earth from under my feet. He knocked the scythe from my hand with a blow to my wrist and threw me facedown across the front of the saddle. When I kicked out, it only seemed to spur the horse to greater speed. The jarring, as I bounced on my ribs and guts, was more painful than the blow had been. A strong hand was on my back, and I could feel the man’s body over mine as he leaned forward, pressing the horse onward. I opened my eyes, but shut them again swiftly when I was greeted by the upside-down view of the hoof-whipped ground bolting by.

Just when we seemed to be slowing and I dared to open my eyes again, I felt the insistent tip of a blade at my back.

“We’re under orders not to kill you,” he said. “Not even to knock you out, your twin said. But anything short of that, we won’t hesitate, if you give us any trouble. I’ll start by slicing a finger off, and you’d better believe I wouldn’t even stop riding to do it. Understand, Cassandra?”

I tried to say yes, managed a breathless grunt.

We rode on. From the endless jolting and the hanging upside down, I was sick twice—the second time on his leather boot, I noted with some satisfaction. Cursing, he stopped his mount and hauled me upright, looping a rope around my body so that my arms were bound at my sides. Sitting in front of him, the pressure in my head was eased as the blood flowed back down to my body. The rope cut into my arms, but at least it held me steady, grasped firmly by the man at my back. We traveled that way for the rest of the day. At nightfall, when the dark was slipping over the horizon like a noose, we stopped briefly and dismounted to eat. Another of the men offered me bread, but I could manage only a few sips from the water flask, the water warm and musty. Then I was again hoisted up, in front of a different man now, his black beard prickling the back of my neck. He pulled a sack over my head, but in the darkness it made little difference.

I sensed the city in the distance, long before the clang of hoofs beneath us indicated that we’d reached paved roads. Through the sack covering my face, glints of light began to show. I could feel the presence of people all about me—more even than at Haven on market day. Thousands of them, I guessed. The road steepened as we rode on, slowly now, the hoofs noisy on cobbles. Then we halted, and I was passed, almost tossed, down to another man, who dragged me, stumbling, for several minutes, pausing often while doors were unlocked. Each time we moved on, I heard the doors being locked again behind us. Each scrape of a bolt sliding back was like another blow.

Finally, I was pushed down onto a soft surface. I heard a rasp of metal behind me, a knife sliding from a sheath. Before I had time to cry out, the rope around my body fell away, slit. Hands fumbled at my neck, and the sack was ripped from my head, the rough burlap grazing my nose. I was on a low bed, in a small room. A cell. There was no window. The man who’d untied me was already locking the metal door behind him.

Slumped on the bed, the taste of mud and vomit in my mouth, I finally allowed myself to cry. Partly for myself, and partly for my twin; for what he’d become.

Francesca Haig grew up in Tasmania, gained her PhD from the University of Melbourne, and was a senior lecturer at the University of Chester. Her poetry has been published in literary journals and anthologies in both Australia and England, and her first collection of poetry, Bodies of Water, was published in 2006. In 2010 she was awarded a Hawthornden Fellowship. She is also the author of the Fire Sermon series, which includesThe Fire Sermon, The Map of Bones, and The Forever Ship. She lives in London with her husband and son. Visit FrancescaHaig.com and follow her on Twitter @FrancescaHaig.

"A beautiful, brutal story about what it means to be human, and what's worth fighting for."

“Readers who enjoy the Hunger Games series, Pierce Brown’s Red Rising, and like-minded dystopian literature will enjoy this first title in a trilogy.”

"As an award-winning poet, Haig's prose is gorgeous and engaging, particularly when she describes the desolate landscape, now peppered with ruins from the Before. Fans of dystopias will appreciate this adventure filled yet character-focused tale that offers hope and explores (in a refreshingly nuanced way) the moral complexities involved in defeating an oppressive and backward government structure."

"Debut novelist Haig builds a richly textured world and creates characters who immediately feel real. The suspense of the plot, driven by the fear and anger underlying this unbreakable bond between twins, never flags. Haig's experience as a poet shows in her writing, which is clear, forceful and laced with bright threads of beauty. With its well-built world, vivid characters and suspenseful plot, this book, the first in a planned trilogy, is poised to become the next must-read hit."

"Set in a vividly realised world of elite Alphas and their ‘weaker’ Omega twins, [this series] holds a mirror up to our obsession with perfection.”

"A potential heir to the Hunger Games.”

"The Fire Sermon is an undeniable page-turner... At the heart of Haig's worldbuilding is a precious love story between Cass and a fellow Omega on the run named Kip. The writing surrounding these two beautifully demonstrates Haig's craft. If you thought Peeta Mellark had a big fan club, just you wait. There will be copious amounts of kissy fan art and montage videos. You can count on it."

“Fantasy and sci-fi fans finally have a book they can bond over. This is going to be a series to watch."

“The best post-apocalyptic novel I’ve read in years – it’s dark, deep, and doesn’t conform to the dystopian tropes we’ve all come to expect.”

“A beautifully written tale of a dark and often unforgiving post-apocalyptic world . . . a spectacular introduction to the series."

"Words like 'masterpiece' and 'instant classic' are cliché, but in the case of Francesca Haig's astounding The Fire Sermon, they're the only words to use. It's a breath-taking, passionate, absolutely sensational work of imagination, perfectly structured, beautifully written, populated with fabulous characters and packed with intrigue, violence, compassion and underlined by a very important human message that is always present without ever becoming homily. The Fire Sermon is completely without equal – it leaves Hunger Games, Divergence, Twilight blah blah-yawn twitching in the dust."

"A hell of a ride. I would recommend it to anyone I can, regardless of age."

More books in this series: The Fire Sermon