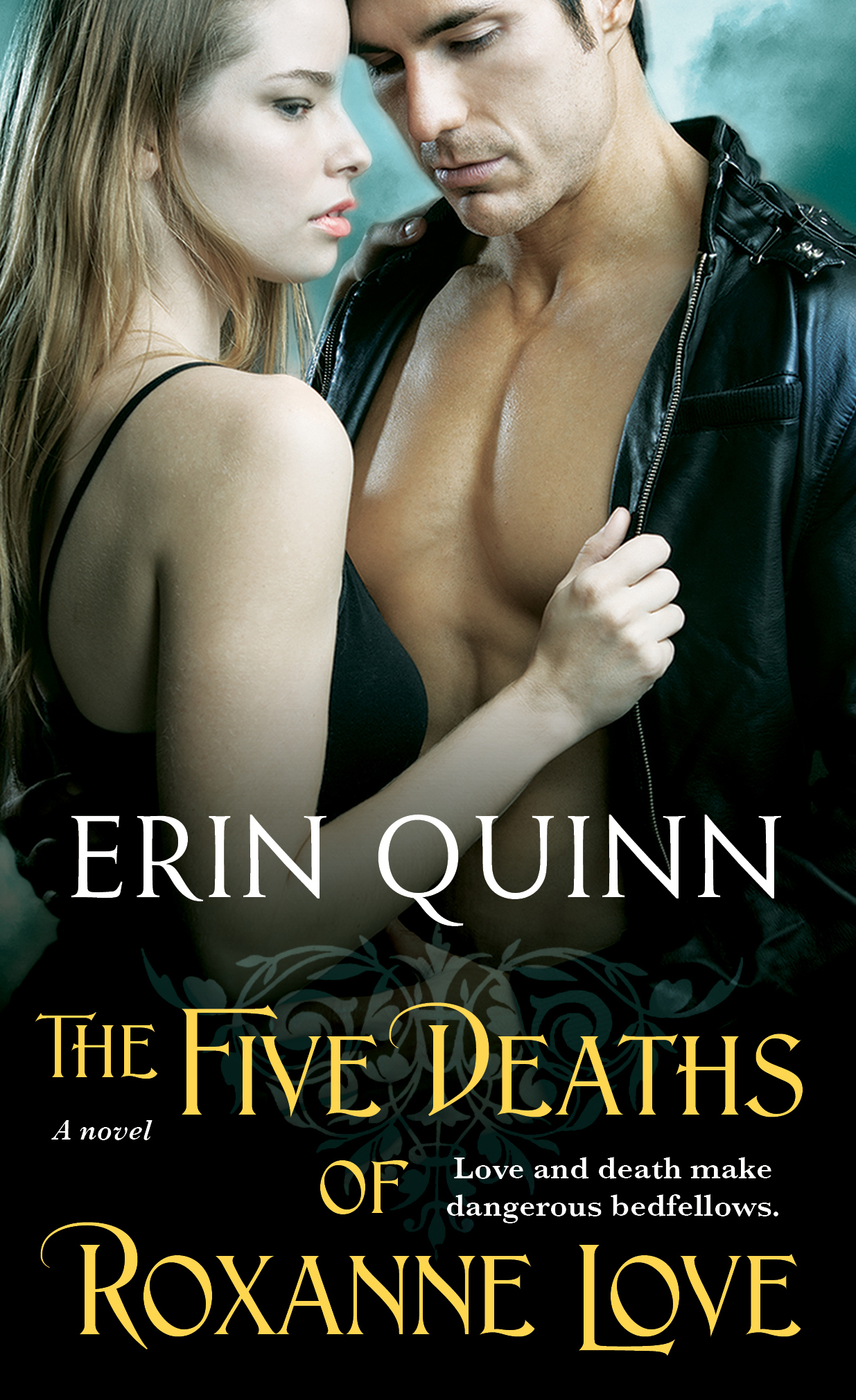 All Roxanne Love has ever wanted is to be normal—marriage, kids, the life of June Cleaver. She tries to fit in but can’t conceal her ability to defy death—not from the world, not from the darkest creatures of the Beyond and not from the Reaper determined to destroy her. Now Roxanne is on the run, her only ally a compelling, dangerous detective with secrets of his own. Against her will, she’s drawn to his quiet strength and heated touch. But can she trust him?

...until she felt death's kiss.

Incognito as guilt-ridden cop, Santo Castillo, the Reaper’s plan is simple: get close to Roxanne, uncover the secret of her immortality and cut it at the source. Yet with this borrowed body come emotions the Reaper hadn’t expected. Now nothing is clear but his conflicted desire to protect the woman he came to kill. As destiny forces them to face an enemy hell-bent on using Roxanne to wipe out all of mankind, she and Santo must choose between love...and salvation.


The reaper entered the room as Santo Castillo spun the cylinder of the revolver, took a deep swallow of Wild Turkey, then put the muzzle in his mouth. He pulled the trigger without hesitation. The hollow click that followed seemed to mock the shadowed silence.

Santo choked back a sob, dropped the gun on the low coffee table in front of him, and reached for his glass again. For a long moment he just sat there, shoulders hunched, silent, dry sobs wracking his body. A tall man, with broad shoulders and a heavy, muscular frame, he looked odd crying his dry tears. The reaper moved closer, perplexed by the duplicity of human emotion. The man wanted to die. He begged for death, yearned for it. And yet he fought it even now, when it was too late.

The reaper paused just behind him and blew a soft breath in his ear. Santo stiffened, lifted his head, and looked around uneasily.

A shudder went through the human and he took another hasty drink, wincing as the burn of the alcohol slid down his throat.

A light hung just above the couch and coffee table where Santo wallowed in his misery. The reaper gave it a gentle nudge, making it sway back and forth, producing cadaverous shadows that slithered across the walls. The chain squeaked ever so slightly in a macabre overture to what would come. Santo’s gaze darted warily around the room. His fear seasoned the air and the reaper breathed it in. Fear always honeyed the reaping.

He moved closer, trailing his fingers over Santo’s broad shoulders, admiring the hard strength of him. Yes, he would be perfect.

Santo jumped and spun in his seat, staring right through the reaper, seeing nothing but the queer boogeymen of his imagination. His anxious eyes grew hot with panic as he turned back around. The small hairs on his nape stood on end. Santo reached for his gun and fumbled, sending it in a tailspin across the table, knocking over a framed snapshot he’d propped in front of him—a silent witness to his madness. The gun skated off the smooth surface and hit the carpeted floor with a dull thud.

While Santo ducked down to retrieve it, the reaper righted the photo.

Visibly shaken, his pulse a staccato beat at his throat, Santo closed his eyes and rubbed the scruff of his beard. He mumbled something the reaper couldn’t hear, but then again, he didn’t need to hear it. They all prayed at this point.

After several deep breaths, Santo opened his eyes again and focused on the framed picture, once more positioned on the table. The image of a jubilant Santo with dark, sparkling eyes and a wide, dimpled smile looked back from the photograph. Wrapped around him from behind was a female with the same brown skin and velvety gaze. She laughed at the camera.

The reaper remembered her. He’d been the one to take her when her time had come. She and her baby had tasted of sweetness and light, and as he’d passed them through to their next destination, he’d been strangely moved by a sense of loss.

He frowned with distaste at the memory. He blamed another woman for the unwanted emotion. Roxanne Love. Before her, he’d never cared for the souls he’d reaped. Only that they’d abounded.

He watched Santo as the human scowled at the righted photograph. The reaper could see the memory of the last few moments replaying in Santo’s mind, in his expression. The spinning gun careening toward the snapshot, the frame teetering, toppling over with a flat, cracking sound that had left a splinter in the glass at the bottom right corner. Santo’s eyes shifted back and forth as he recounted each cause and effect in an attempt to rationalize how the frame could have come to be propped in front of him now, as if none of that had happened.

Santo shook his head in silent denial. Looking like the cop he’d been for the last twelve years, he narrowed his dark eyes and searched the room.

You know who I am. You invited me here.

He savored Santo’s anguish. Few humans really desired death when they courted it in this manner. This one did, yet Santo felt he deserved the torture of the game he played. He owned a half-dozen guns that would have done the job quicker, but he endured the punishment of each deadly click. The torment of forcing himself to do it again and again.

The reaper knew Santo would keep pulling that trigger until the job was done. At 12:10 a.m., a clean shot would blow away the back of his skull and kill him instantly.

For Santo Castillo, death would come, but not from a bullet. His beautiful face would remain intact, his gray matter safely stored in his cranium. The reaper had never taken a soul from a human that still lived, but he didn’t hesitate to do it now. He needed a body for a day, maybe less. Just long enough to find the woman who’d escaped him. The woman whose soul he’d touched, held, and lost. Just long enough to reap her and return to the Beyond.

In less than twenty-four hours Roxanne Love would die once again. Only this time he’d be there, in flesh and spirit, to make sure she stayed dead.

As Santo put the gun in his mouth once more, the reaper sat down on the table in front of him and let himself be seen. For a single, glorious moment, Santo’s terror swaddled them both, then the reaper took over and put an end to the human’s misery.
Erin Quinn

Erin Quinn writes dark paranormal romance for the thinking reader. Her books have been called “riveting,” “brilliantly plotted,” and “beautifully written” and have won, placed or showed in the RWA RITA Award, Booksellers Best, WILLA Award for Historical fiction, Readers Crown, Award of Excellence and many more. Go to ErinQuinnBooks.com for more information or follow Erin Quinn Author on social media.

“One of the best books I've read all year."

Author Erin Quinn manages to create such a sense of longing in the quiet narrative of the Reaper that I was completely captivated within the first few pages. Quinn's silky narrative has a noir tone that, with the subtlety of a whisper, pulls you into the story and makes the rest of the world fade away. The pull is magnetic, and you CANNOT put the book down.

Quinn does a masterful job of revealing bits and pieces of the mystery during the almost non-stop action and tremendous chase scenes that follow. I enthusiastically recommend The Five Deaths of Roxanne Love to readers who enjoy a suspense thriller along with their paranormal romance.

More books in this series: The Beyond Series