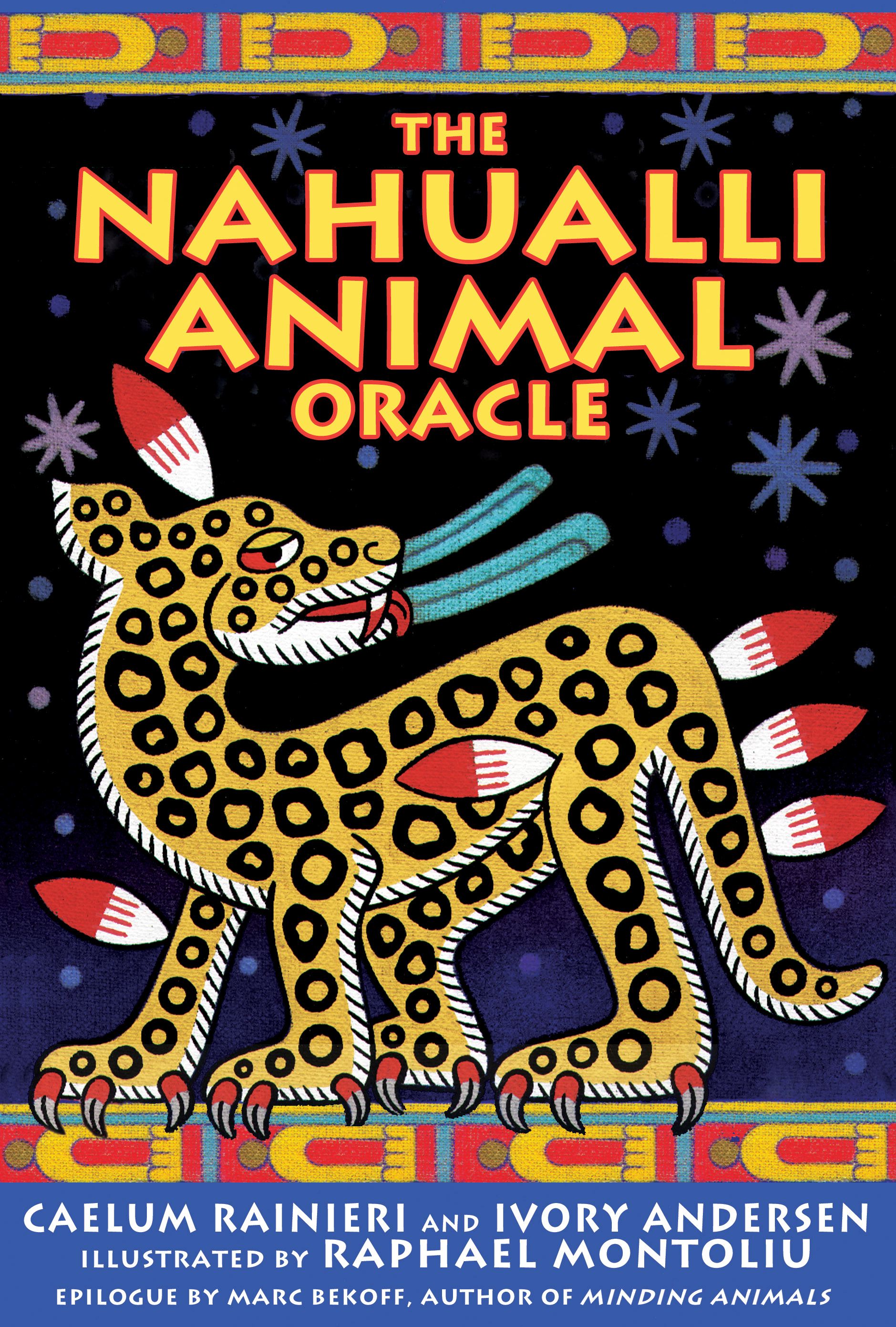 • Based on traditional Aztec symbolism

Nahualli is the Aztec word for shadow soul, the animal double of the human soul. Aztec tradition held that on the fourth day of an infant’s life a priest would perform a ceremony to bind the newborn to its animal soul mate. A sacred pact between human and animal initiated a lifelong relationship of mutual protection and guidance. In return for defending its nahualli, the human would be endowed with the unique skills, strength, and wisdom of that animal.

The Nahualli Animal Oracle offers a means for contemporary spiritual seekers to identify their own nahualli and receive soul guidance from the Aztec wisdom tradition. Each of the 40 beautifully illustrated cards, which includes 31 nahualli animals and 9 Lords of the Night deities, represents an essential aspect of human life--such as joy, aggression, or sacrifice. The book shows how to invoke these powerful entities, through meditation and divination, to intervene in everyday affairs and provide insight into perplexing problems. The authors provide detailed guidelines for interpreting the significance of each nahualli animal or deity, along with an explanation of its mythological origins. Ancient Aztec religious symbolism is reflected in the divination spreads, such as The Five Directions, which is derived from the compass symbol at the center of the intricate Aztec calendar.

The Shadow Soul
If you had been born a Mexican during the time of the Aztec empire, a priest from one of the many temples in Tenochtitlán, the capital, would have attended you on the fourth day of your life. The purpose of this visitation was for the priest to see, bind, and announce your relationship with your animal double--your nahualli. This would be done in a ceremonial fashion, with your family gathered around you. Embers from the birth fire were used to light a torch that was used to consecrate the agreement between infant and animal. It was an important event because it was the first ritual of your young life, and the Aztec gods favored ritual.
The Agreement
Traditionally the nahualli teaches the youth its secrets, skills, and abilities. If the nahualli is known for its strength, like the jaguar, the youth becomes strong. If the nahualli is known for its ferocity, like the hummingbird, the youth becomes fierce. Additionally, the nahualli offers the youth its protection both in the physical realm and in the realm of the dead. If the bond is close enough, the human and the animal may even die at the same time and make the four-year journey to Mictlan (the underworld of Aztec cosmology) together. In return for these favors the human agrees to protect the nahualli, as much as he or she is able, and never to take the life of any member of its species--not for food, nor for ritual, nor for sport. This was a sacred contract, and any violation of it would result in serious consequences, both in this world and the next.

The Role of a Nahualli in Your Life
To the Mexica, living with one’s nahualli was as natural a function as associating with friends, going to school and going to war. It was the very first ritual performed for an infant, and the relationship between human and nahualli lasted a lifetime.
To contemporary individuals interested in the nahualli practice, it is completely new terrain. The initial experience of discovering who your nahualli is can be exhilarating. The prospect of opening a method of communication between yourself and your nahualli via the symbolic language of this oracle can be life-changing. In our practice with hundreds of students, we have seen time and again how recognizing one’s animal double helps explain personality traits and temperaments, likes and dislikes, choices made and paths avoided.
But that is just the beginning. A nahualli can be a valuable ally in both your everyday affairs as well as your spiritual growth and development. He or she can enhance your intuition and literally whisper messages in your ear when the circumstances call for it.

Keywords: Cleverness, Survival, Sneakiness, Opportunism
Aztec cosmology tells of the Five Suns, or epochs. Monkeys were born during the Second Sun. Quetzalcoatl was then the ruling solar deity, and the food source was the mesquite tree. There came a time when fierce hurricanes destroyed all the villages, and the people who were not killed were blown into the forests and became monkeys. Rather than mourn over what they had lost, they set about learning how to make the most of their new situation.
When Monkey makes an appearance in your reading, you need to be more clever about dealing with the issue at hand. A straightforward approach is the wrong one to take now. It’s time to become an opportunist on your own behalf and look for ways to further your cause. You may need to employ a little sneakiness and find a way to distract attention from your true plan with an alternate ruse. You may be caught up in the moral dilemma of fair play. You must ask yourself the question, fair to whom? Life seldom seems fair to most of us because we all have to find ways to survive in a world that doesn’t always make sense. It is not a game wherein we all play according to the same set of rules. Rules sometimes differ according to economic class, positions of power, and associations. Monkey’s lesson for you is to not be constrained right now by the rules that others have created for you.
Caelum Rainieri

Caelum Rainieri has been teaching classes in indigenous magical traditions, animal totemism, and mythological archetypes for over 10 years. He lives in the Pacific Northwest.

Ivory Andersen has been teaching classes in indigenous magical traditions, animal totemism, and mythological archetypes for over 10 years. She lives in the Pacific Northwest.

Raphael Montoliu is an illustrator and painter, who has had a lifelong involvement with Native American art, mythology, and spiritual traditions. He lives in Lakeport, California.

"Full of powerful and expansive insight into our relationship with the natural world."