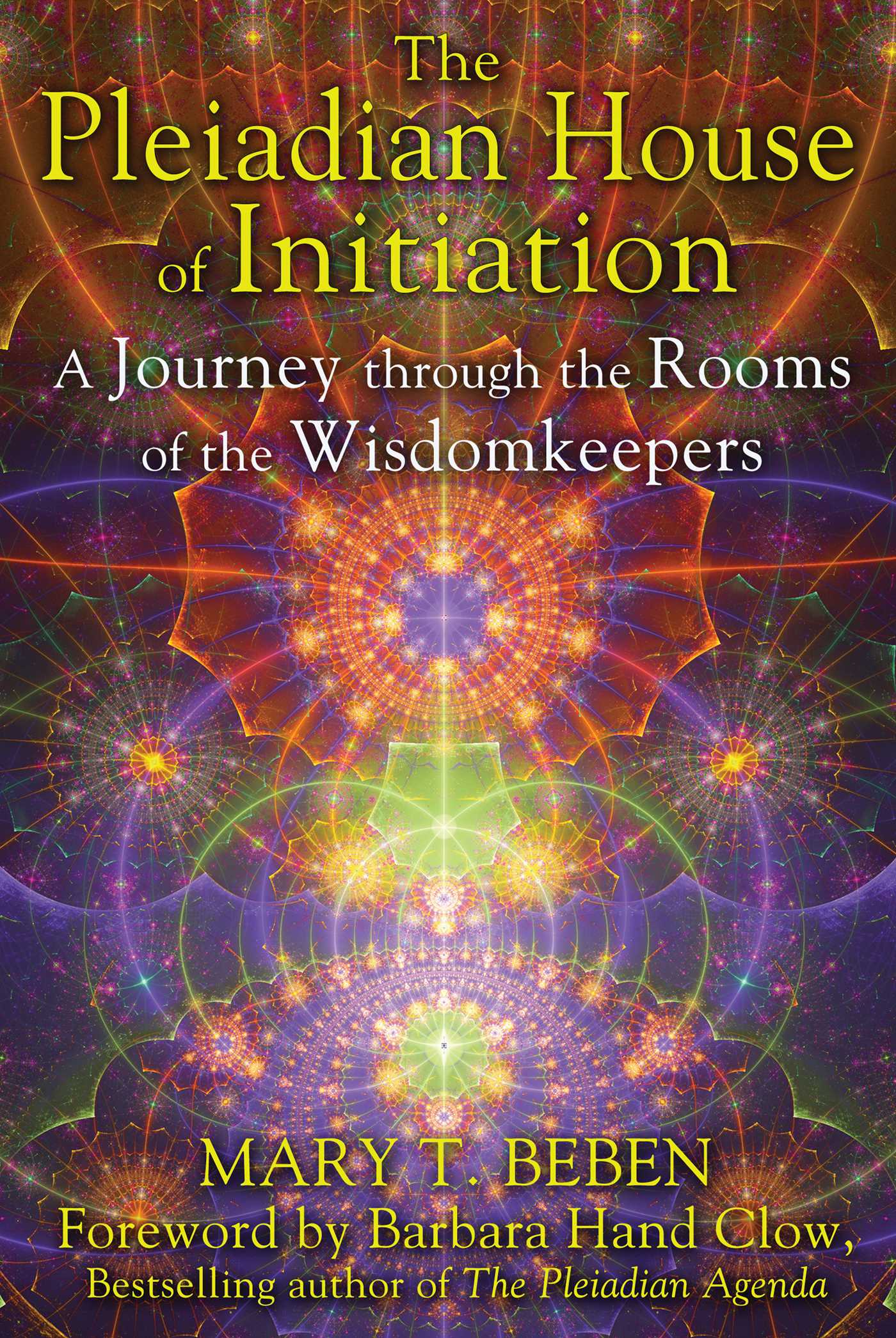 The Pleiadian House of Initiation

A Journey through the Rooms of the Wisdomkeepers

• Recounts the author’s spiritual trials to reach the highest levels of her soul’s celestial mansion and her encounters with immortal wisdom teachers such as White Buffalo Woman, Taliesin, Mother Mary, and Grandmother Spider

• Offers a prophetic glimpse into the future of life on Earth, how our planet is the key to conscious evolution, and humanity’s divine role as Keepers of Earth

Inviting each of us to discover our spiritual home in the higher realms, Mary Beben provides a visionary tour of the celestial mansion of her family in the Pleiades, a home she inhabited prior to this incarnation on Earth. She explains how transitioning into materiality causes each of us to forget our starry origins, yet it is still possible to remember our Pleiadian heritage and divine reasons for choosing to manifest on Earth.

Beben details her initiatic journey as she rediscovered the beautiful rooms on each floor of her Pleiadian house and learned to ascend to higher consciousness while remaining lovingly rooted in the Earth. She recounts her trials to reach the higher levels of the building and her encounters with immortal wisdomkeepers such as White Buffalo Woman, Taliesin, Mother Mary, and Grandmother Spider. Embedded throughout her story are lessons to help each of us jettison psychological baggage like fear and jealousy so we can continue our ascension and fulfill our Pleiadian birthright.

Beben explains how her journey offers a prophetic glimpse into the future of life on Earth as well as the key to opening the heart to the higher realms of existence. She shows how ascension will not mean departing Earth but will place our Earthen reality in perspective and help solve problems that seem insurmountable from this dimension.

In rediscovering the celestial origins of our souls, we recognize not only the Earth as the key to conscious evolution but also our role as the Keepers of Earth, the planet celebrated throughout the universe on which each of us is fortunate to have chosen incarnation.

Ten years passed between the day I met Grandmother Spider in the hallway on the third floor of the Pleiadian mansion (when I thought I was about to discover more of the marvelous fourth level but instead was catapulted into the deepest dive of my life) and the time I began to recover and re-enter my life. At that point I felt as though I could go on and live a productive life again, but it seemed to me as if I had been permanently broken in some unrecoverable way. I felt my age more than ever before--I was seventy-four and did not believe there was much of life left to me. Still, I could smile again and enjoy family and friends. And then . . .

In January of 2012 I contracted a sudden and very pernicious pneumonia in both lungs. I was hospitalized for seven full days in a state of weakness and illness that frightened my family and worried the doctors. I was not as aware of the seriousness of my state as they were, although I knew I was very sick. During the first hours after being placed into bed in the hospital room I went through the death experience that I will attempt to describe. I must truthfully say that none of the attending staff were aware I had actually passed over the line. It must have been very brief in linear time, but what I experienced was rather long and terrifying.

I did not see any lights or tunnels or friendly beings, as is so often the report of those who have had NDEs. Instead I was taken to hell while still alive. This part of the journey was real beyond tolerance and unendurable. Other than the illness I felt no physical pain, but I was immersed in scenes of unbearable cruelty of one human being or more to other humans. I was unable to turn away or shut my eyes, even though I’m sure my physical eyes were closed in the hospital bed. No matter how I prayed and pleaded not to have to see, I was exposed to up-close scenes of the most bestial horrors. Over and over again I retched as the brutality could not be endured. What made the events so terrible was the fact that I knew beyond question that these were not imaginary scenes from a movie or from some distant memories but were actual happenings on Earth right then--happening in the moment right before my eyes. I cannot prove this statement, of course, but there was no doubt or thought of any kind except that I was witnessing a reality, not a dream.

After what seemed a full day and a half, this mercifully ended. I was then taken by what felt like two winged beings to a place that at first I did not recognize. Although I had never read a real description of this place, I soon understood that it was the River Styx and I was about to have my life entirely extinguished. The winged beings were holding me by my head and feet and were lowering me toward the repulsive swamp. I could see immediately that there was no coming back from this place of decay. It was a sluggish, yellow mud, not a river as I would have pictured from mythology books. It was just liquid enough to gurgle slightly as it barely moved, and the stench of sulfur was overwhelming. It looked like nothing so much as putrefied matter that would be toxic even to breathe. I was inches away from it and about to be dropped in.

Some observing function in me was still operating and this part was totally mystified by the situation and by my own behavior. For I was not struggling or fighting it in any way. The observer was thinking: “This is not how God would have me die, surely!” It made no sense that I would die and lose everything I had worked for in my whole life. I could see that there was no resurrection of any kind possible after this. Yet the other part of me just yielded to the choice and said, “Oh well, if this is how it is . . .” right before I was totally blotted out.

As I began to recover from the pneumonia and eventually left the hospital, I distinctly remembered this extremely real episode but did not understand what it was. It took weeks and then more weeks as I began to understand the momentous thing that had happened. I did not tell the doctors about it because I was very puzzled about it myself. Little by little, the facts sorted themselves out as I realized it was another spiritual experience of transformation. This seems to have been, for me, the definitive experience of leaving behind all broken-ness, all past history, all sense of a former life, and beginning life in the Eternal Now. I have come back from death itself to bring my message of what one knows after passing over. And that leads us right back into the marvelous mansion.

Since my dip into the River Styx, a new life has taken over my entire being. It has been sixteen months since then, and shortly after this experience I was finally admitted farther into the fourth level of the mansion in the Pleiades. There is where I discovered trunks overflowing with the fabric of creation. I have received almost constant guidance about the way we shall build the Earth together, using our own chaos to weave the future. It only needs sorting and dedicated weaving to create anew from what the Earth has provided.

I have learned that fear is absolutely useless and that everything can be worked out from this higher level.
Mary T. Beben

Mary T. Beben has a master’s degree in transpersonal psychology from Sophia University in Palo Alto, California. A member of the Jung Society of Washington, D.C., she has been a spiritual teacher for much of her life. She lives in Lorton, Virginia.

“A great, creative achievement; excellent writing and observation of a life lived with awakened awareness, this seeming make-believe world is absolutely real. The Pleiadian House of Initiation is a brilliant tapestry of vision, culture, religions, and nature. Like Grandmother Spider, Mary Beben has spun her web and flung it into the sky, reminding us we come from the stars. This book is her healing initiation. It is both her Psalmistry and her Song of Songs.”

– Risa D’Angeles, founder of the Esoteric and Astrological Studies Institute

“Mary Beben creates powerful, energetic images that hold magical truths that are woven throughout the journey. She supports the reader in being able to take a next evolutionary step in remembering we are spiritual beings having a human experience.”

“Beben’s holographic prose transports the reader into a multidimensional yet intimate experience of accessing the higher realms that reside within us. The Pleiadian House of Initiation is a wonderful and uplifting guide. A real treasure during this time of conscious evolution.”

– Danielle Rama Hoffman, author of The Council of Light

“Examining her house of many rooms--a classic metaphor for the soul--illuminated by profound images and wisdom derived from decades of dream and meditation, Mary Beben offers us a great treasure: her soul’s odyssey.”

– Margaret Starbird, author of The Woman with the Alabaster Jar

“If you have not yet discovered the magical and visionary work of Mary T. Beben, now is the time. This book will appeal to lovers of the Pleiadian Mystery schools everywhere.”

“Mary Beben’s The Pleiadian House of Initiation invites the reader to accompany her on an extraordinary journey to the Oneness of the galaxies. Informed by years of prayer, reflection, and study, Beben finds the words to relate her amazing visionary quest and to approach the ineffable. The reader is rewarded with rare insight into the ongoing evolution of the universe and our role as co-creators with the Holy One. The author’s graceful prose flows from image to image, reflecting the dreamlike quality of her journey. Mary Beben challenges us to unlock the love fibers encoded in our DNA.”

– Susan Tiberghien, author of One Year to a Writing Life

The Pleiadian House of Initiation

A Journey through the Rooms of the Wisdomkeepers