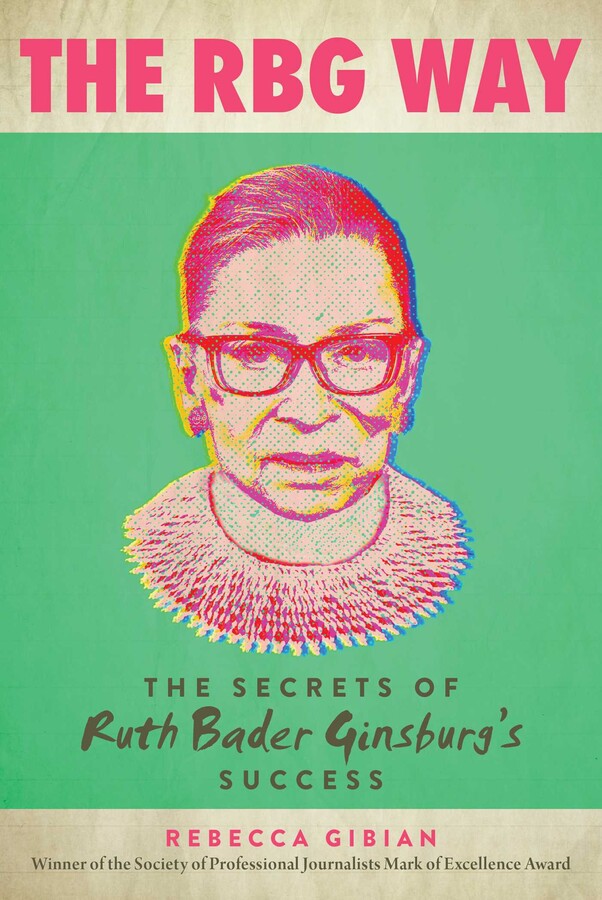 Understanding and applying the wisdom of Justice Ruth Bader Ginsburg!

Given her incredible tenure as a Supreme Court justice as well as her monumental impact on the modern women’s rights movement, Ruth Bader Ginsburg has become one of the most prominent political leaders of today. To complement her judicial significance, she has also become one of the most culturally popular political figures in US history. Not only has her workout routine gone viral (and been detailed in a book by her trainer), but RBG’s story has been featured in multiple critically acclaimed films.

Organized into three parts and then broken down into more specific chapters within each part, The RBG Way offers wisdom from Justice Ginsburg, based on comments she has made on particular topics of importance. Insight is offered on subjects such as women’s rights, creating lasting partnerships, overcoming hardship, how to be brave, and how to create lasting change. Rebecca Gibian offers her seasoned journalistic perspective to shed light on beliefs that RBG holds strongly, in a manner that is both comprehensive and accessible.

IT IS 1959, AND TWENTY-SIX-YEAR-OLD Ruth Bader Ginsburg is having trouble getting a job. She’s already attended Harvard Law School, where she was one of only nine women seated among more than five hundred men. But then her husband, Marty, got a job offer in New York City, so Ginsburg transferred to Columbia Law School, where she became the first woman to be on two major law reviews: the Harvard Law Review and Columbia Law Review. Now, having graduated from Columbia tied for first in her class, she was looking for a job at a law firm or as a clerk to a judge or justice.

None of her accomplishments seemed to matter to the men in charge of the legal world. She was not given an offer at Paul, Weiss, Rifkind, Wharton & Garrison, despite a successful clerkship the summer before. They already hired an African American woman, which fulfilled their commitment to diversity. Ginsburg applied to a dozen other firms, resulting in only two second interviews and no job offers.

Judge Learned Hand of the US Court of Appeals for the Second Circuit also denied Ginsburg a job, even though they shared an interest in process theory. So did Supreme Court Justice Felix Frankfurter, who wouldn’t even interview Ginsburg for a clerkship position.

And there’s no question about it: potential employers rejected her due to her gender. Despite graduating at the top of her class, being on two law reviews, and having strong recommendations—including one from a professor (and later dean) at Harvard Law School, Albert Martin Sacks—Ruth Bader Ginsburg was a Jewish woman and a mother to a young toddler, which were three strikes against her. She may have accomplished a lot, on top of seeing her husband through his first bout of cancer, but she just couldn’t get a job.

“How did RBG become a ‘Supreme’ rock star? Read Rebecca Gibian’s charming and insightful book. It’s all there, secrets and all, told in delightful, accessible style.”
—Marvin Kalb, senior fellow at the Brookings Institution and author of Enemy of the People

“You might think, given all of the attention that Justice Ginsburg has received in recent years, that there is little more that can be said about her life and career. But Gibian has a fresh perspective on matters, and extracts a number of practical and useful lessons from those well-known facts in a way that both illuminates RBG’s achievements and can serve as a model for others seeking to emulate her success.”
—David Post, two-time former clerk for RBG

“A self-help book [that] distills the experiences and inspiration of the Supreme Court justice into a series of life lessons…Good advice from a life well lived.”
—Kirkus Reviews

"If you yearn to achieve success like Ruth Bader Ginsburg, this is your book. . . A road map for those who aspire to become notorious."
—Booklist

More books in this series: Women in Power