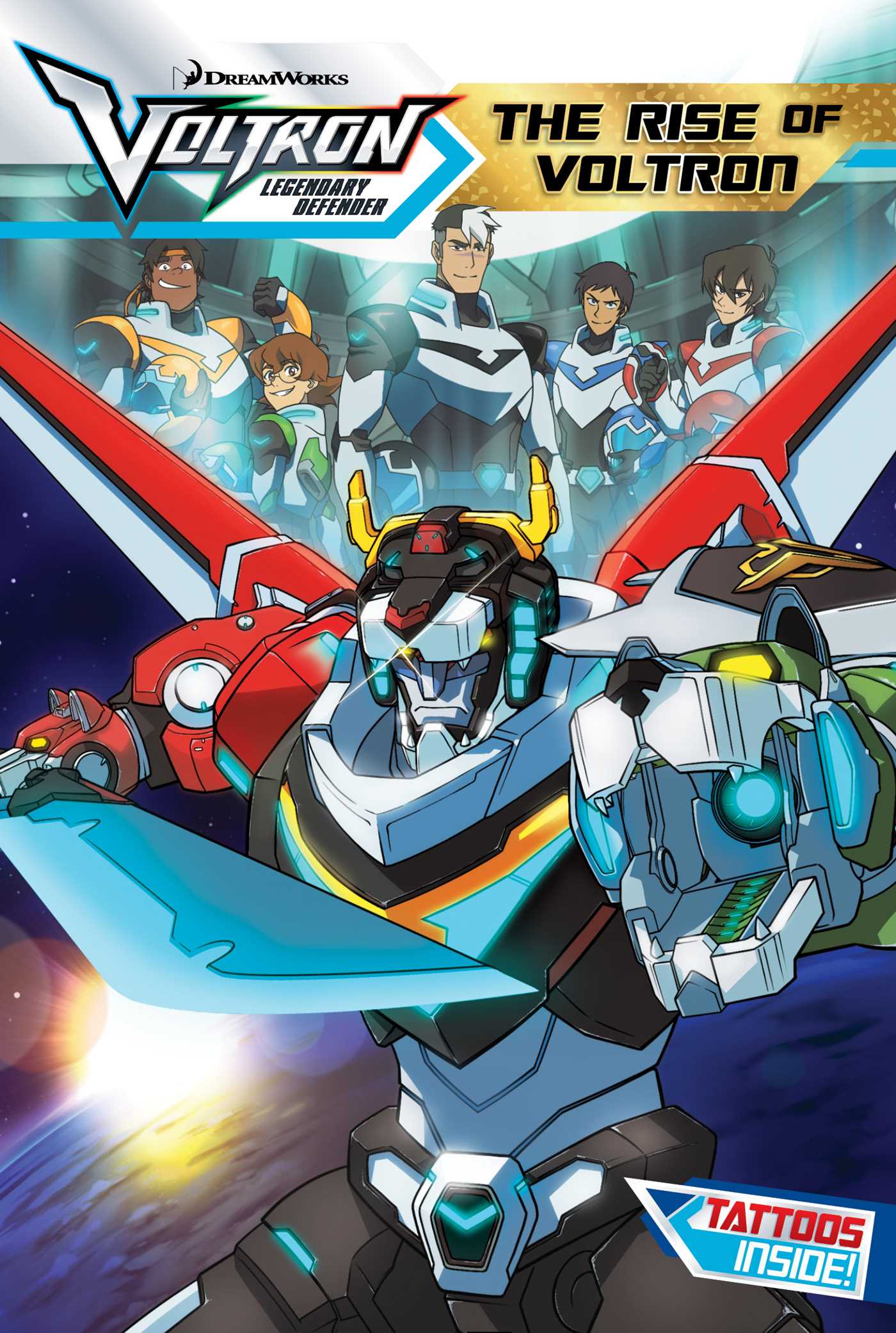 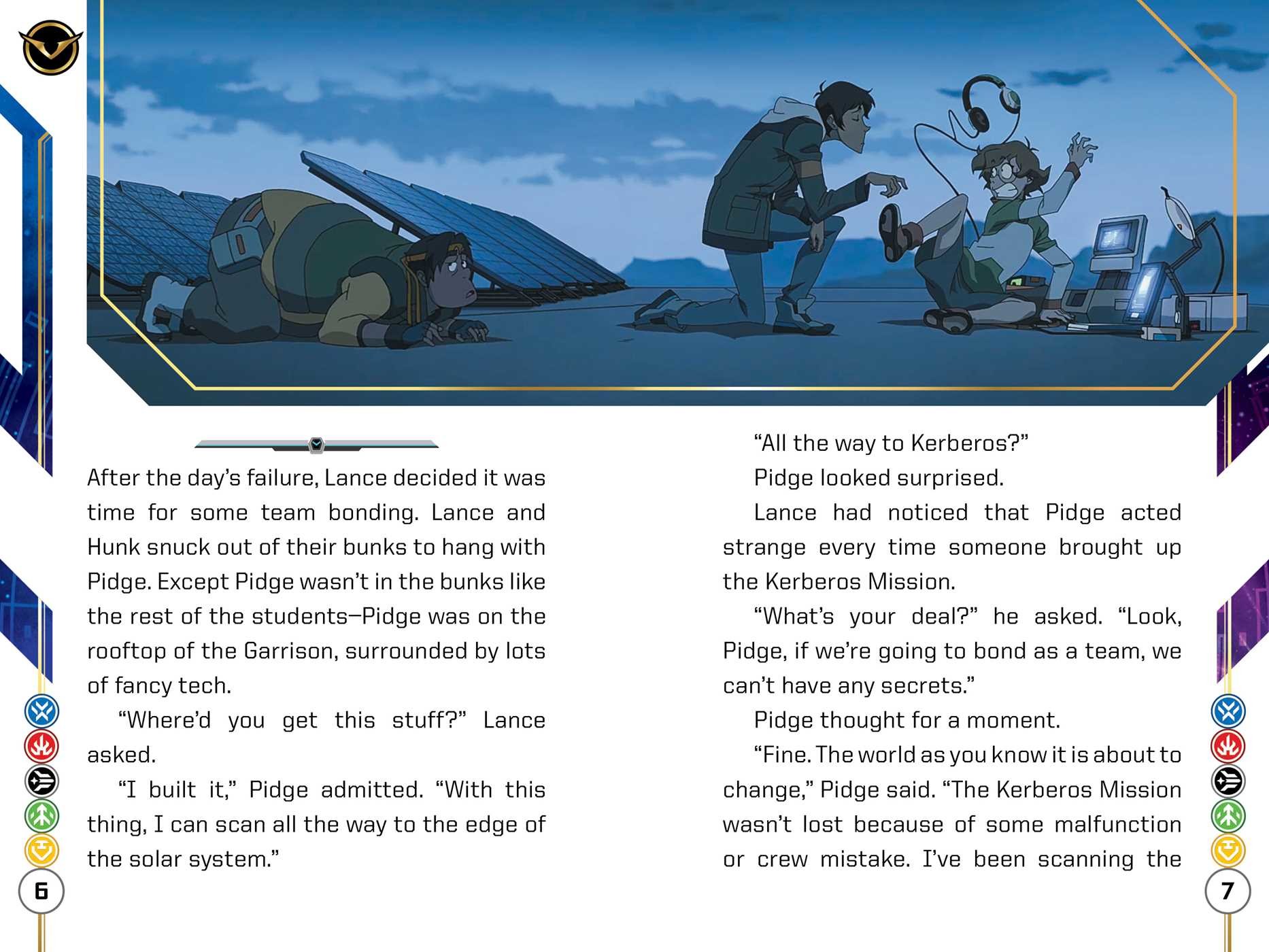 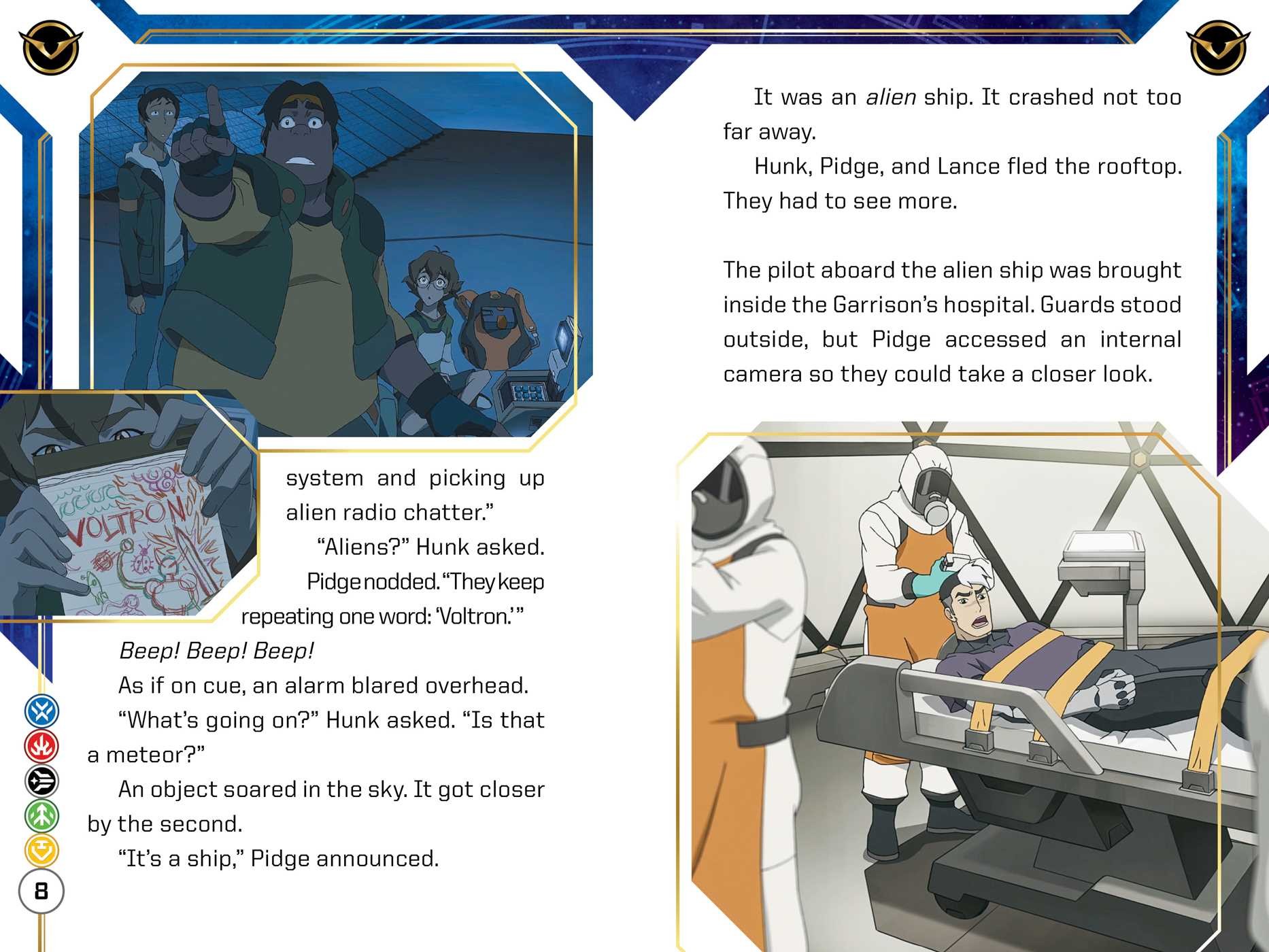 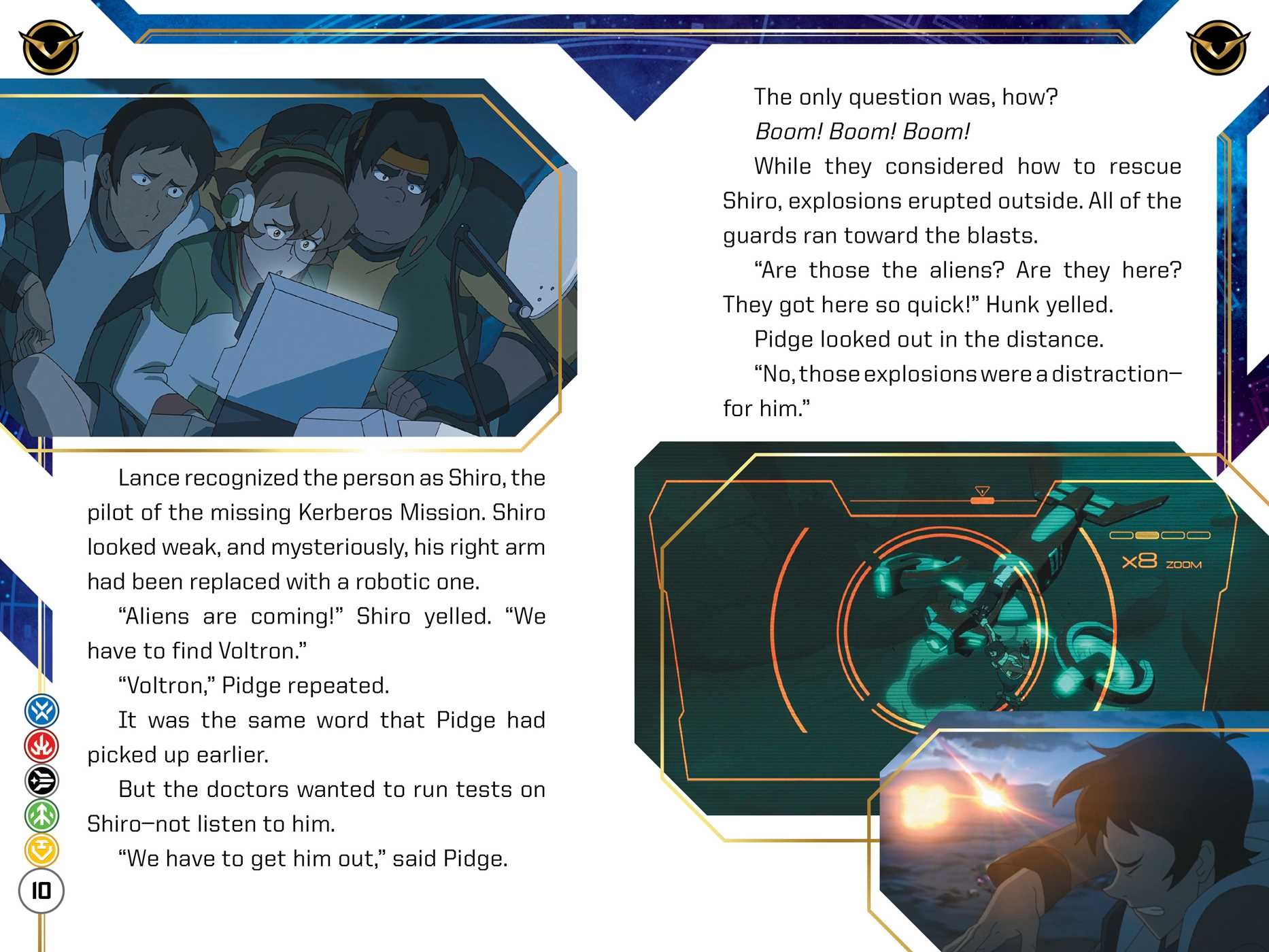 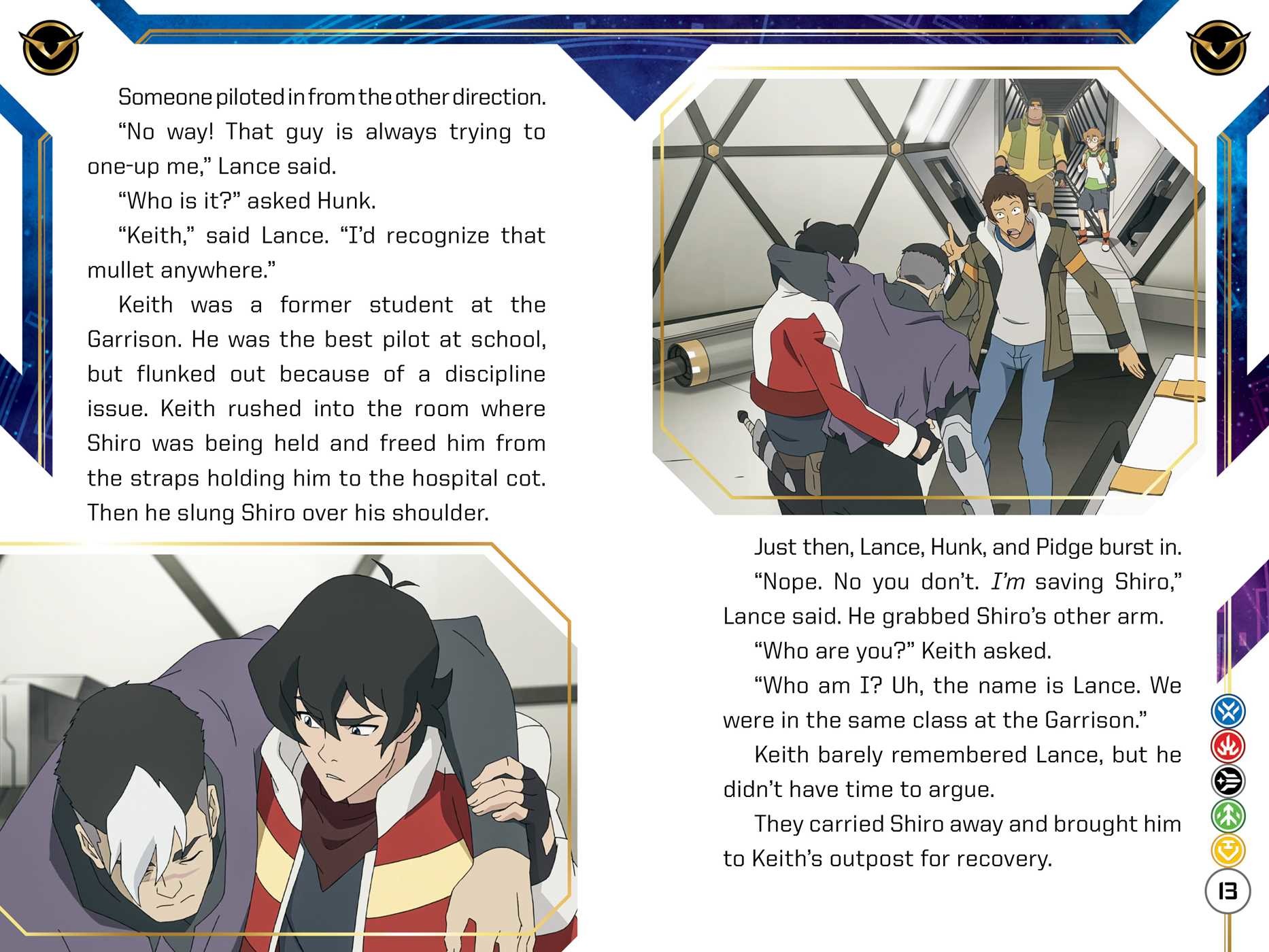 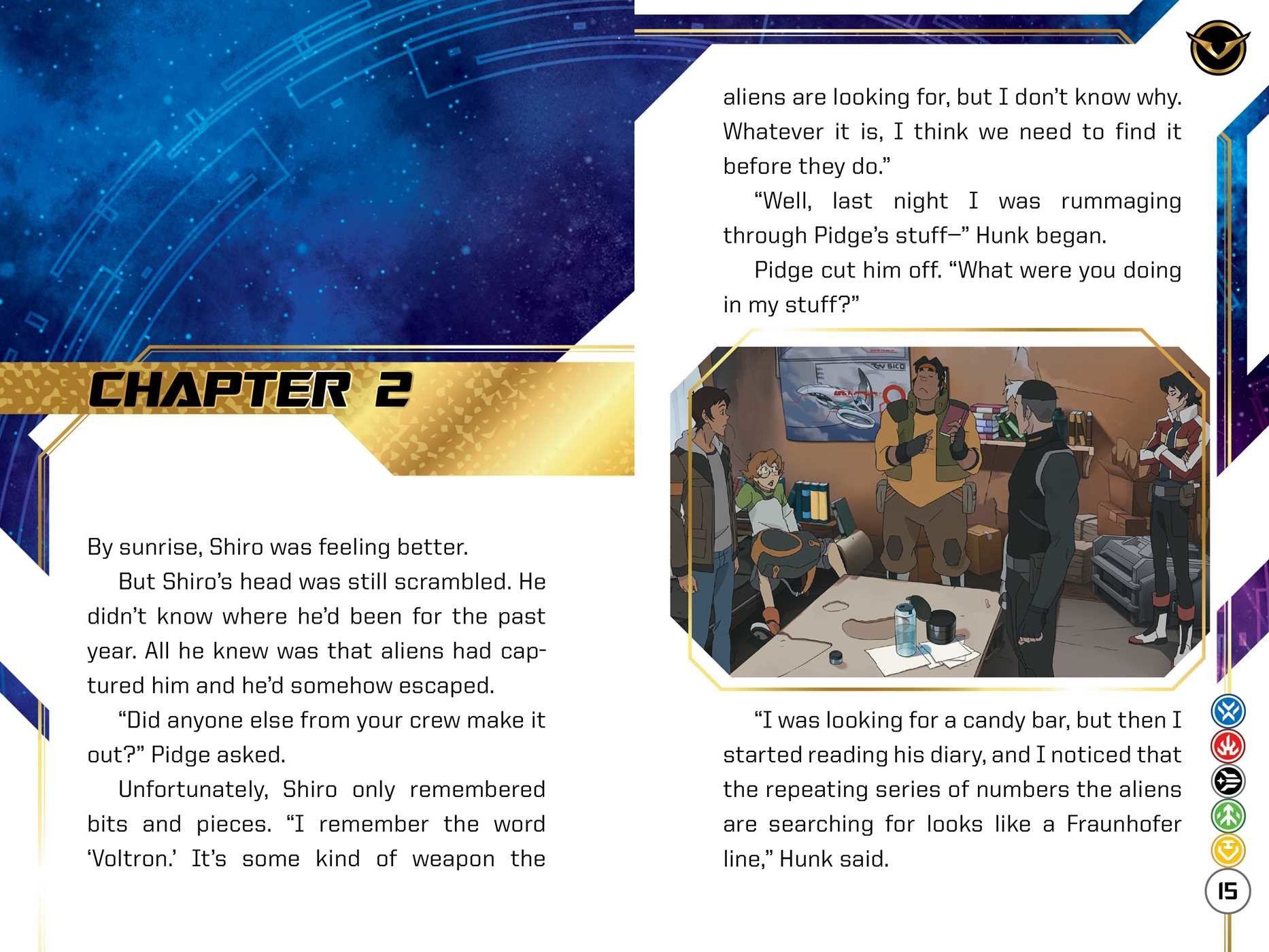 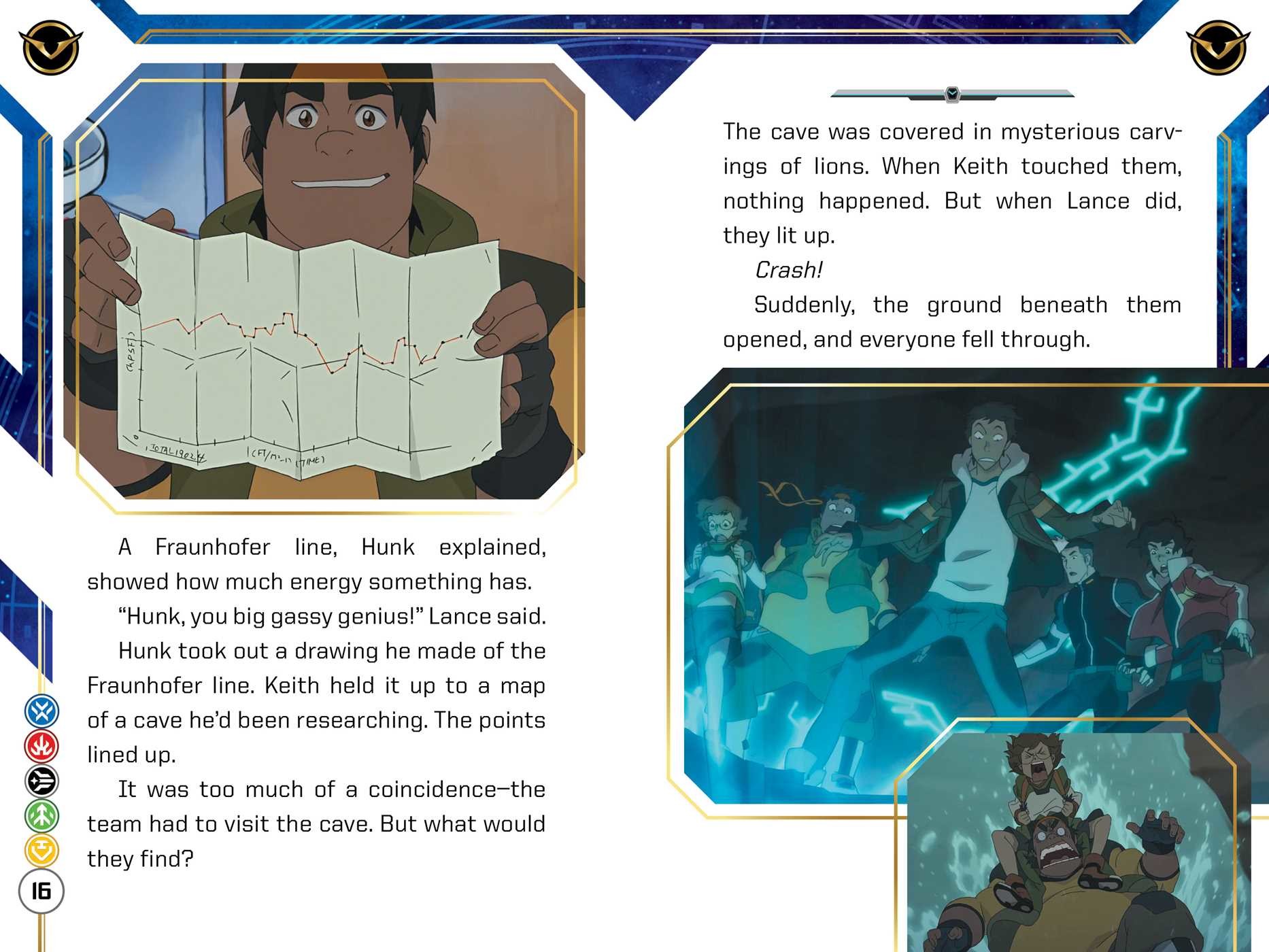 The Rise of Voltron

Go back to the very beginning…

When five pilots from Earth—Lance, Hunk, Pidge, Keith, and Shiro—discover a giant blue lion in the middle of the desert, they never imagined that they would be embarking on the most epic intergalactic adventure ever…an adventure with very high stakes. Can these five heroes put aside their differences and learn how to form Voltron, the universe’s only hope against the evil Galra Empire?

Young readers will love this retelling of the very first episode complete with color stills throughout!

This paperback edition comes with a sheet of tattoos.

Lance was a student at a school for space travel called the Galaxy Garrison. He was studying to be a pilot—and taking an important simulation test.

“Lance, can you keep this thing straight?” said Hunk, one of Lance’s classmates.

Poor Hunk looked like he was about to throw up.

“Relax, Hunk. It’s not like I did this,” Lance said. He sped up the mock-spaceship. “Or this!” He made a sharp dive.

“Unless you want to wipe beef Stroganoff out of this thing, you better knock it off,” Hunk said.

“We’ve picked up a distress signal,” said Pidge, another of Lance’s classmates.

Blech! He barfed right into the main gearbox.

The shaking got worse, and Lance lost control of the ship.

Smash! The ship crashed into the surface of the moon.

The test was over.

After the day’s failure, Lance decided it was time for some team bonding. Lance and Hunk snuck out of their bunks to hang with Pidge. Except Pidge wasn’t in the bunks like the rest of the students—Pidge was on the rooftop of the Garrison, surrounded by lots of fancy tech.

“Where’d you get this stuff?” Lance asked.

“I built it,” Pidge admitted. “With this thing, I can scan all the way to the edge of the solar system.”

“All the way to Kerberos?”

Lance had noticed that Pidge acted strange every time someone brought up the Kerberos Mission.

Pidge thought for a moment.

“Fine. The world as you know it is about to change,” Pidge said. “The Kerberos Mission wasn’t lost because of some malfunction or crew mistake. I’ve been scanning the system and picking up alien radio chatter.”

As if on cue, an alarm blared overhead.

An object soared in the sky. It got closer by the second.

It was an alien ship. It crashed not too far away.

Hunk, Pidge, and Lance fled the rooftop. They had to see more.

The pilot aboard the alien ship was brought inside the Garrison’s hospital. Guards stood outside, but Pidge accessed an internal camera so they could take a closer look.

Lance recognized the person as Shiro, the pilot of the missing Kerberos Mission. Shiro looked weak, and mysteriously, his right arm had been replaced with a robotic one.

“Aliens are coming!” Shiro yelled. “We have to find Voltron.”

It was the same word that Pidge had picked up earlier.

But the doctors wanted to run tests on Shiro—not listen to him.

“We have to get him out,” said Pidge.

The only question was, how?

While they considered how to rescue Shiro, explosions erupted outside. All of the guards ran toward the blasts.

“Are those the aliens? Are they here? They got here so quick!” Hunk yelled.

Pidge looked out in the distance.

“No, those explosions were a distraction—for him.”

Someone piloted in from the other direction.

“No way! That guy is always trying to one-up me,” Lance said.

Keith was a former student at the Garrison. He was the best pilot at school, but flunked out because of a discipline issue. Keith rushed into the room where Shiro was being held and freed him from the straps holding him to the hospital cot. Then he slung Shiro over his shoulder.

Just then, Lance, Hunk, and Pidge burst in.

“Who are you?” Keith asked.

“Who am I? Uh, the name is Lance. We were in the same class at the Garrison.”

Keith barely remembered Lance, but he didn’t have time to argue.

They carried Shiro away and brought him to Keith’s outpost for recovery.
Patrick Spaziante

Patrick Spaziante is an American comic book artist and children’s book illustrator known for his work for Archie Comics, in particular his interior pencil and cover work for Sonic the Hedgehog, Sonic X, and Sonic Universe.

The Rise of Voltron