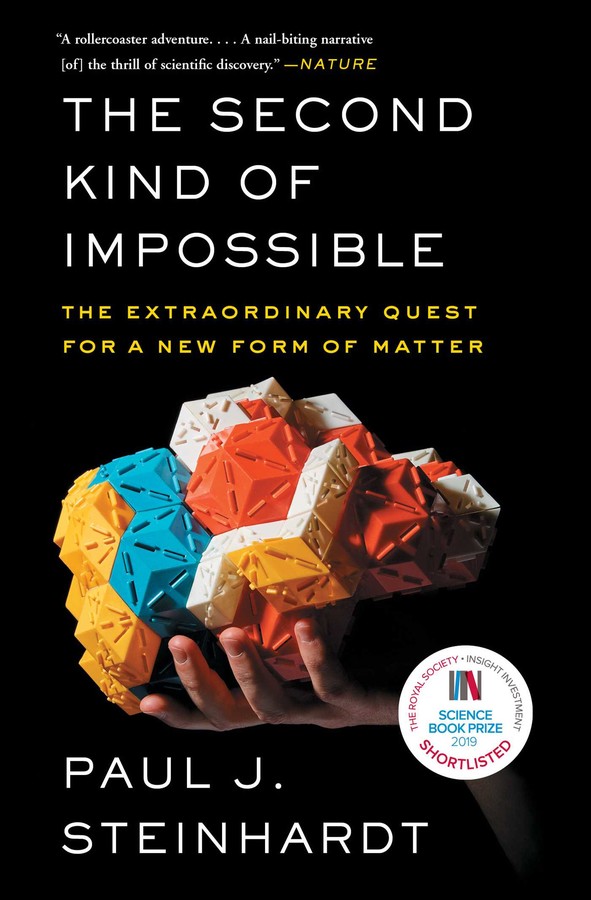 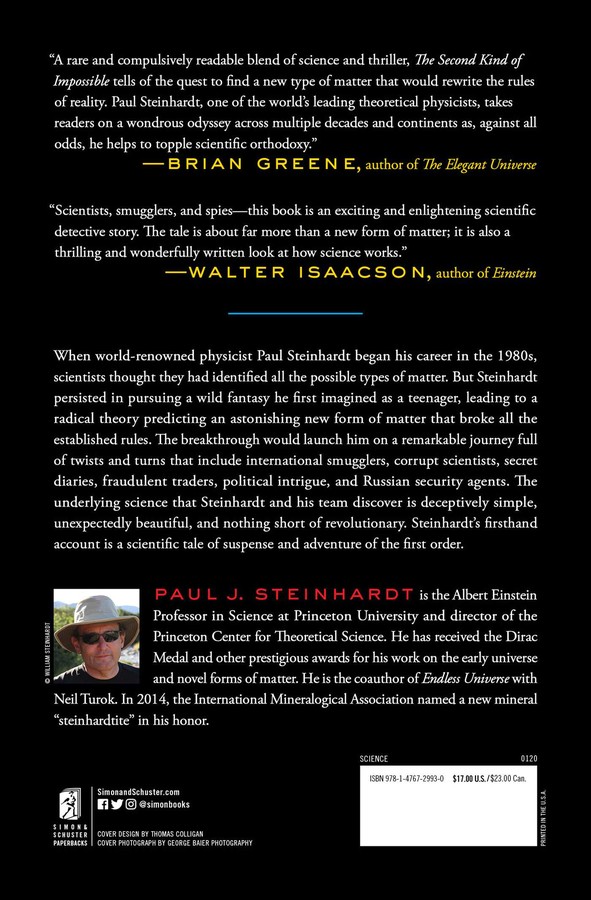 The Second Kind of Impossible

The Extraordinary Quest for a New Form of Matter

One of the most fascinating scientific detective stories of the last fifty years, an exciting quest for a new form of matter. “A riveting tale of derring-do” (Nature), this book reads like James Gleick’s Chaos combined with an Indiana Jones adventure.

When leading Princeton physicist Paul Steinhardt began working in the 1980s, scientists thought they knew all the conceivable forms of matter. The Second Kind of Impossible is the story of Steinhardt’s thirty-five-year-long quest to challenge conventional wisdom. It begins with a curious geometric pattern that inspires two theoretical physicists to propose a radically new type of matter—one that raises the possibility of new materials with never before seen properties, but that violates laws set in stone for centuries. Steinhardt dubs this new form of matter “quasicrystal.” The rest of the scientific community calls it simply impossible.

The Second Kind of Impossible captures Steinhardt’s scientific odyssey as it unfolds over decades, first to prove viability, and then to pursue his wildest conjecture—that nature made quasicrystals long before humans discovered them. Along the way, his team encounters clandestine collectors, corrupt scientists, secret diaries, international smugglers, and KGB agents. Their quest culminates in a daring expedition to a distant corner of the Earth, in pursuit of tiny fragments of a meteorite forged at the birth of the solar system.

Steinhardt’s discoveries chart a new direction in science. They not only change our ideas about patterns and matter, but also reveal new truths about the processes that shaped our solar system. The underlying science is important, simple, and beautiful—and Steinhardt’s firsthand account is “packed with discovery, disappointment, exhilaration, and persistence...This book is a front-row seat to history as it is made” (Nature).

The Second Kind of Impossible PREFACE
MIDDLE OF NOWHERE, KAMCHATKA PENINSULA, JULY 22, 2011: I held my breath as the blue behemoth lurched its way down the steep incline. It was my first day in the mad contraption, a weird-looking vehicle with what looked like a Russian army tank on bottom and a beat-up moving van on top.

To my amazement, our driver, Viktor, managed to make it all the way down the hill without toppling over. He hit the brakes, and our truck shuddered and shook to a halt at the edge of a riverbed. He turned off the ignition, and muttered a few words in Russian.

“Viktor says this is a good place to stop,” our translator announced.

I peered out the front window, but could not for the life of me see what was so good about it.

Climbing out of the cab, I stood atop the enormous tank treads to get a better view. It was a cool summer evening, approaching midnight. But it was still light out, a reminder of how far I was from home. The summer sky never gets very dark so close to the Arctic Circle. The earthy, pungent smell of decaying vegetation filled the air, the unmistakable smell of the Kamchatka tundra.

I jumped off the tank treads into the thick, spongy muck to stretch my legs when, suddenly, I was attacked from all sides. Millions and millions of ravenous mosquitoes were springing up from the muck, drawn to the carbon dioxide I was exhaling. I swiped frantically with my arms and turned this way and that to escape them. Nothing helped. I had been warned about the tundra and its perils. Bears, insect swarms, unpredictable storms, endless miles of muddy swells and ruts. But these weren’t just stories anymore. This had become all too real.

My critics were right, I realized. I had no business leading this expedition. I was neither a geologist nor an outdoorsman. I was a theoretical physicist who belonged back home in Princeton. I should be working on calculations, with notebook in hand, not trying to lead a team of Russian, Italian, and American scientists on what was probably a hopeless quest in search of a rare mineral that had traveled billions of years through space.

How could this have happened? I asked, as I struggled against the ever-growing swarm. Unfortunately, I knew the answer: The crazy expedition had been my idea, the fulfillment of a scientific fantasy that had been occupying my mind for nearly three decades. The seed was planted in the early 1980s when my student and I developed a theory showing how to create novel forms of matter long thought to be “impossible,” atomic formations explicitly forbidden by venerable scientific principles.

I had learned early on to pay close attention whenever an idea is dismissed as “impossible.” Most of the time, scientists are referring to something that is truly out of the question, like violating the conservation of energy or creating a perpetual motion machine. It never makes sense to pursue those kinds of ideas. But sometimes, an idea is judged to be “impossible” based on assumptions that could be violated under certain circumstances that have never been considered before. I call that the second kind of impossible.

If one can expose the underlying assumptions and find a long-overlooked loophole, the second kind of impossible is a potential gold mine that can offer a scientist the rare opportunity, perhaps a once-in-a-lifetime opportunity, to make a transformational discovery.

In the early 1980s, my student and I discovered a scientific loophole in one of the most well-established laws of science and, exploiting that, realized it was possible to create new forms of matter. In a remarkable coincidence, just as our theory was being developed, an example of the material was accidentally discovered in a nearby laboratory. And soon, a new field of science was born.

But there was one question that kept bothering me: Why hadn’t this discovery been made long ago? Surely nature had made these forms of matter thousands, or millions, or perhaps even billions of years before we had dreamed them up. I could not stop myself from wondering where the natural versions of our material were being hidden and what secrets they might hold.

I did not realize at the time that this question would lead me down the road to Kamchatka, an almost thirty-year-long detective story with a dizzying array of improbable twists and turns along the way. So many seemingly insurmountable barriers had to be conquered that it sometimes felt like an unseen force was guiding me and my team step by step toward this exotic land. Our entire investigation had been so . . . impossible.

Now we were in the middle of nowhere, with everything we had achieved up to this point at risk. Success would depend on whether we were lucky enough and skillful enough to conquer all of the unexpected obstacles, some of them terrifying, that we were about to confront. 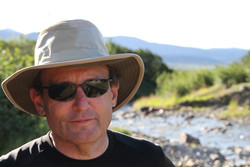 Paul J. Steinhardt is the Albert Einstein Professor in Science at Princeton University, where he is on the faculty of both the departments of Physics and Astrophysical Sciences. He cofounded and directs the Princeton Center for Theoretical Science. He has received the Dirac Medal and other prestigious awards for his work on the early universe and novel forms of matter. He is the author of The Second Kind of Impossible, and the coauthor of Endless Universe with Neil Turok, which describes the two competing ideas in cosmology to which he contributed. With his student, Dov Levine, Steinhardt first invented the theoretical concept of quasicrystals before they were synthesized in a laboratory. More than three decades later, with Luca Bindi, he guided the team that led to the discovery of three different natural quasicrystals in the Kamchatka Peninsula. In 2014, the International Mineralogical Association named a new mineral “steinhardtite” in his honor.

“A rare and compulsively readable blend of science and thriller, The Second Kind of Impossible tells of the quest to find a new type of matter that would rewrite the rules of reality. Paul Steinhardt, one of the world's leading theoretical physicists, takes readers on a wondrous odyssey across multiple decades and continents as, against all odds, he helps to topple scientific orthodoxy.”
—Brian Greene, author of The Elegant Universe

“Scientists, smugglers, and spies—this book is an exciting and enlightening scientific detective story. The tale is about far more than a new form of matter; it is also a thrilling and wonderfully written look at how science works.”
—Walter Isaacson, author of Einstein

“An epic account of two scientific triumphs: a thirty-year theoretical search for understanding and a real-world expedition into the wilds of Kamchatka. It is as if The Origin of Species and The Voyage of the Beagle had been published together in one volume.”
—Freeman Dyson, author of Maker of Patterns

“A truly amazing adventure story, full of twists and turns, right up to the very end. It has my strongest recommendation.”
—Sir Roger Penrose, author of The Emperor’s New Mind

“An intriguing blend of science and international adventure. [Steinhardt] takes readers on a wild ride in search of a new kind of matter…full of intrigue and adventure, culminating with the epic Kamchatka journey....A general audience can and should enjoy this original, suspenseful true-life thriller of science investigation and discovery.”
—Publishers Weekly

“A gripping scientific quest…an admirable popular account of the quasicrystal, an oddball arrangement of atoms that seems to contradict scientific laws.…Steinhardt [is] a pioneer in the field and a fine writer.”
—Kirkus Reviews

"[A] memoir and rollercoaster adventure, packed with discovery, disappointment, exhilaration and persistence...This book is a front-row seat to history as it is made."
—Nature Magazine

"Part physics primer, part fantastic adventure...Steinhardt’s affection and admiration for the journey’s colorful cast of characters infuse every page. Although his excitement is palpable, he is also careful and methodical, often reminding himself that he could be wrong. The Second Kind of Impossible shows the benefit of a slow and steady approach to science, where determination and luck are just as important as insight."
—Science News

"A rip-roaring adventure tale...a book that I could not put down because it was fast-paced and had genuine surprises in every chapter. Steinhardt deserves his place on the A-list."
—Physics World

The Second Kind of Impossible

The Extraordinary Quest for a New Form of Matter