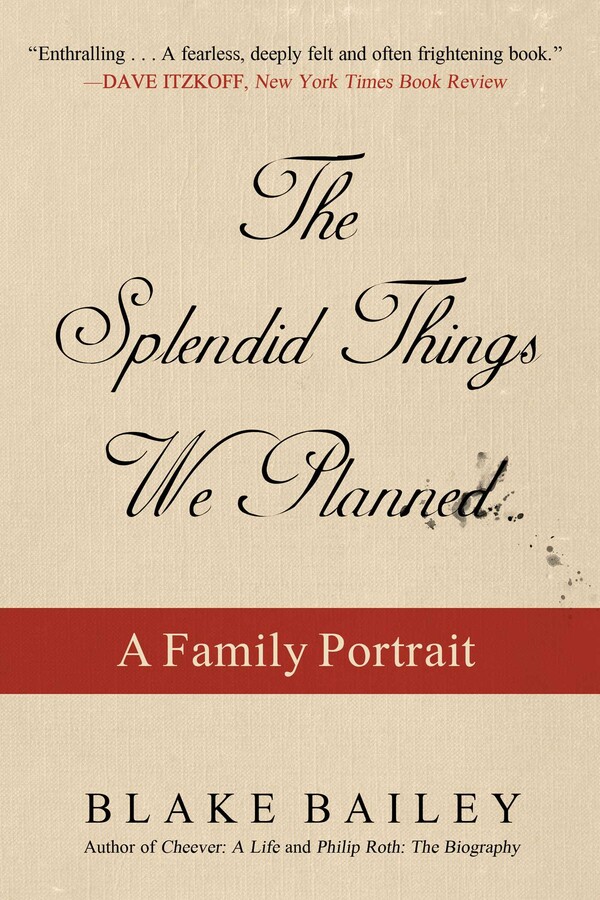 The Splendid Things We Planned

The renowned biographer’s unforgettable portrait of a family in ruins—his own.

Meet the Baileys: Burck, a prosperous lawyer once voted the American Legion’s “Citizen of the Year” in his tiny hometown of Vinita, Oklahoma; his wife Marlies, who longs to recapture her festive life in Greenwich Village as a pretty young German immigrant, fresh off the boat; their addled son Scott, who repeatedly crashes the family Porsche; and Blake, the younger son, trying to find a way through the storm. “You’re gonna be just like me,” a drunken Scott taunts him. "You’re gonna be worse."

Winner of the National Book Critics Circle Award and finalist for the Pulitzer Prize, Blake Bailey has been hailed as "addictively readable" by the New York Times and praised for his ability to capture lives "compellingly and in harrowing detail" by Time. The Splendid Things We Planned is his darkly funny account of growing up in the shadow of an erratic and increasingly dangerous brother, an exhilarating and sometimes harrowing story that culminates in one unforgettable Christmas.

“Enthralling … Achingly honest … a fearless, deeply felt and often frightening book … [The Splendid Things We Planned] arrives at a certain undeniable truth about how we are capable of feeling love for people we would never choose to be around.”
—Dave Itzkoff, New York Times Book Review

“Captivating … harrowing … Bailey maintains a lacerating tone, and examines with the coolness of a detective the staggering things that we can do to the people we love.”
—The New Yorker

“[Told with] scathing honesty … grotesque and grimly funny … [Bailey’s] struggle as a writer looking for truth and as a brother and son looking for catharsis gives the book an unsettling urgency … its specific story, about a family spinning out of control, naturally points to wider, shared experience, and pushes us to consider what we owe our parents, siblings, and children—and what they owe us in return.”
—Ian Crouch, newyorker.com

“Manages to do justice to the tedium of chronic dysfunction without becoming tedious itself … Compelling because of Bailey’s emotional acuity as well as his wit, which emerges as an adaptive coping mechanism—a way to survive despair by streaking it with light.”
—Leslie Jamison, San Francisco Chronicle

“This fine and haunting memoir touches the spot where family, responsibility, and helplessness converge. It’s not a pretty place, but boy has Blake Bailey made it memorable. The Splendid Things We Planned is as forceful and revealing as any of the author’s excellent biographies, and that’s really saying something.”
—David Sedaris

“A brother’s lament, a hard-won, clear-eyed view of one family’s tortured history, The Splendid Things We Planned is everything we hope for in a modern memoir. Blake Bailey’s triumph here is both personal and literary: a beautiful book, rising out of the ruins.”
—Dani Shapiro

“Bailey maintains an almost impossible balance between stringent assessment … and a kind of unflappable sympathy … The book is as clear-eyed and heartbreaking as any of his acclaimed biographies … yet every bit as compelling.”
—Kate Tuttle, The Boston Globe

“An extraordinary memoir, written with the love and rage of a brother and son and controlled with the skill of a master biographer.”
—Geoff Dyer

“Among the many remarkable aspects of Blake Bailey’s unflinching memoir is the fact that his sense of humor remains, despite these harrowing experiences, so entirely intact. His powers of observation, his gift for the mot juste, and above all his brilliant and offbeat humor make this family story a deeply moving and irresistible read.”
—Sarah Shun-Lien Bynum

“Blake Bailey’s remarkable memoir … is a reminder that the best books (fiction or otherwise) impart a sense of shared experience, and to read them is to participate in humanity, not retreat from it. … he has also done for [his brother] what he did for John Cheever: He has written a person to life so that others might know him, too.”
—Gregg LaGambina, The Onion A. V. Club

“With Mr. Bailey’s memoir, we ask for something true, something real, and we get what we paid for.”
—Nicholas Miriello, Los Angeles Review of Books

“One of the most surprising and riveting memoirs of the season.”
—Trisha Ping, BookPage

“Beautifully written … a story [Bailey] had to tell, and he honored it with all his gifts.”
—Lennie Bennett, Tampa Bay Times

“A more genteel, though no less accomplished, update of Harry Crews’s A Childhood … The effect of the writing and Bailey’s own wrestling with time, memory, and loss lingers after the final passages.”
—Library Journal (starred)

“A haunting portrait of more than one tortured soul and a heartfelt probing of the limits of brotherly love.”
—Booklist (starred)

“It seems fitting that biographer Bailey tells the story of his own life by chronicling his brother Scott’s alcoholism and drug addiction, which causes him to descend into violence and madness. . . . Bailey’s story captures the contradictions and tensions that simmer just below the surface of [his] family, as they try to live a normal suburban life in Oklahoma. But as Scott goes from being a self-absorbed teen to a pothead, college dropout, and junkie, the family dynamic unravels, breaking up the marriage as the author himself heads toward alcoholism, debauchery, and ennui—though not to his brother’s depths. But this is Scott’s story, and Bailey tells it wonderfully, in a tragicomic tone that slowly reveals the true depths to which his older brother has sunk.”
—Publishers Weekly

The Splendid Things We Planned