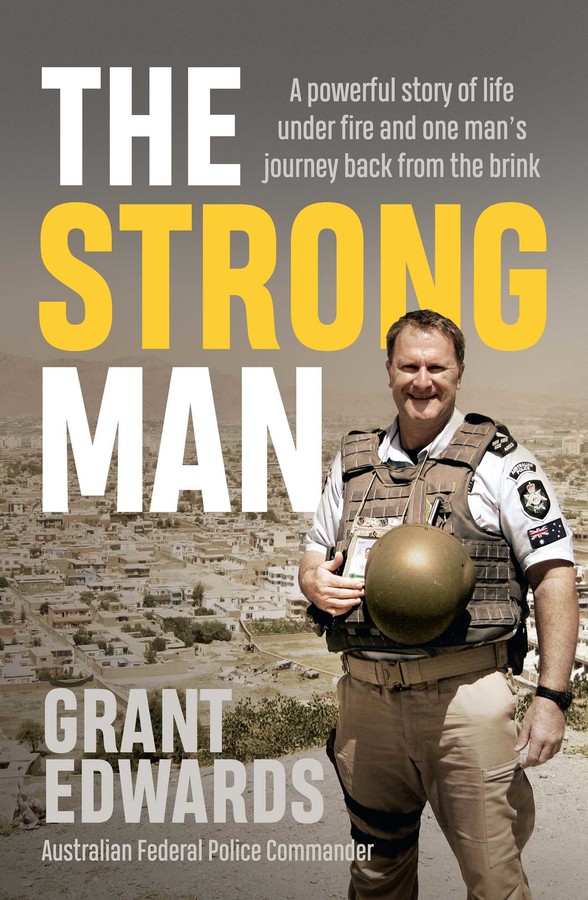 By Grant Edwards
LIST PRICE $16.99
PRICE MAY VARY BY RETAILER

Grant Edwards was once an elite athlete, Olympics qualifier and Australia’s strongest man. His Guinness Book of Records feats of strength were acclaimed internationally, and as a high ranking police officer he spent decades protecting vulnerable people around the world. But nothing could shield him from catastrophic harm in the line of duty.

Rising above his tough beginnings in 1970s suburbia, where he was bullied for his father’s decision to live as a gay man, Edwards found sanctuary in sport. But he found his true calling with the Australian Federal Police, rising swiftly through the ranks to Commander and personally establishing cybercrime units to fight child exploitation and human trafficking. A highly sought after and disciplined security advisor for governments around the world such as East Timor, Afghanistan and the Americas, Edwards was considered the last person to ‘crack’ – but a narrow escape from a deadly attack in Kabul pushed him to breaking point. This is the story of an extraordinary man and his extraordinary battle back from the brink.

“A brave, life-affirming book from a brave man. Grant Edwards’s book works as a thriller, an adventure story, social history and self-help guide. Anyone struggling with the battle that goes on between our two ears will find comfort and help in Grant’s words.”

"As a Foreign Diplomat I have had the honour and privilege of seeing Grant working in different nations, cultures, and languages where there are no barriers for his noble dedication: to make the world a better one for us all. He is truly a citizen of the world."

“Not only is Grant Edwards a respected leader in law enforcement in both hemispheres, he is also an acclaimed athlete, world record holder and mentor to many across the globe who suffer from the debilitating Post Traumatic Stress Disorder.  Grant Edwards is a champion of the highest order and a gentleman to boot.  Along with my family, I am proud to call him a friend.”

“Anyone who has ever met Grant Edwards is immediately impressed by the physical size of the man - but that’s only half the human that he really is. Grant’s physical strength is matched by his ability to care for fellow humans. In his career, he has leapt more hurdles than most of us have been forced to but he’s done with seeming ease as he's a natural leader. Leadership, though, carries an unseen burden and Grant has had to deal with that for too long. The mark of the man is opening himself to fully disclose his weaknesses and not everyone has the inner strength to do that. For that is what I am most proud of him for. And, because of that, I turned to Grant for guidance with some of my own demons. We have been mates for over 25 years and I am pleased to say that his job and journey has changed him but at the core he’s never changed. A true inspiration and a bloody, great bloke! It’s an honor to call Grant Edwards a friend.”

"The aspect of Grant that I am most thankful for is his courage.

I noticed a significant change in his personality when he returned from tours of duty with the AFP in Afghanistan and Timor or leading investigations into child exploitation and trafficking. In many instances he shielded younger officers from exposure.

It was obvious he was struggling, he was stressed, he was withdrawn and distant and he wasn’t the same person. During conversations he would often stare into space.

It took courage for Grant to admit that he was dealing with Post Traumatic Stress Disorder (PTSD). When he first opened up to me about the issues he was facing I wasn’t shocked. I was relieved. I knew there was a long road ahead. But like everything Grant took on, I knew this one conversation would lead to him accepting the challenge. I knew he was a strong man, but facing this challenge showed me strength was much more than pulling a train or plane which he had done on many occasions. This admission was real strength. It wasn’t easy for Grant, here was this athlete of incredible physical strength battling mentally because of situations we was exposed to while on duty. In the past you didn’t talk about your vulnerabilities, in the force it was seen as a sign of weakness.

Because of his status in the force, Grant’s decision to go public with his PTSD altered thinking within the AFP and globally, about the issues facing our first responders and officers in the field."

"It is compelling, at times it is frightening, and at times sad. But it is also a wonderfully good read."

By Grant Edwards
LIST PRICE $16.99
PRICE MAY VARY BY RETAILER