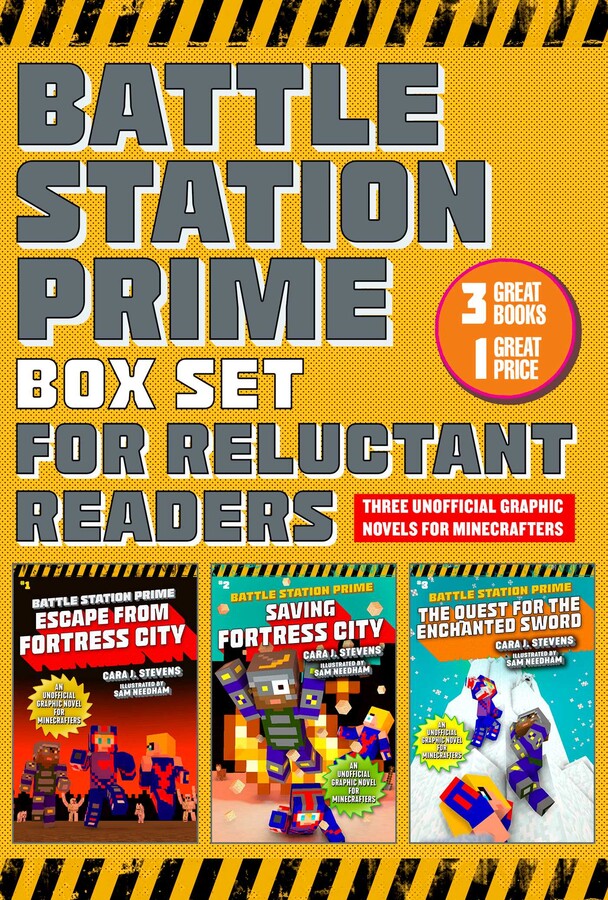 For fans of Minecraft and graphic novels, a full-color box set of three bestselling adventures for reluctant readers.
In this dark, edgy series, Battle Station Prime, Pell, Logan, and Maddy encounter spies, rebels, conspiracy theories, hacks, and danger unlike anything we’ve covered before.

In a world where everyone is judged on their wealth and how many orbs they have, Pell, Logan, and Maddy can’t keep up, no matter how hard they try. When Pell’s Uncle Colin suggests they take themselves off the grid and leave Fortress City to join him in the Wild West, they leap at the chance. At Colin’s direction, they erase all traces of their existence in Fortress City’s databases and leave under cover of darkness.

Almost immediately, they rethink their decision, as they battle hostile monsters and the elements just to stay alive and reach their destination. When they finally get to Uncle Colin’s homestead, they are devastated to find it is run-down and barely livable. Shortly after they arrive, Uncle Colin unceremoniously bids them farewell and takes off on a secret mission. The kids, disillusioned, go back to Fortress City, only to be turned away because they are no longer in the system.

The kids are forced to return to the homestead and use only their knowledge and resources to fortify it against the elements and hostile invaders. As they struggle to stay alive, they begin to wonder: what is Uncle Colin really up to, and will he ever come back?

At first, they are happy to take down the system that failed them and kept them back, but when they receive intelligence of a dangerous presence in the center of Obsidian, they are faced with a decision: save the city or let it be destroyed.

Against Uncle Colin’s advice, the kids plot to sneak into the impenetrable heart of Obsidian to remove the danger, risking everything to save the city that turned them away.

Quest for the Enchanted Sword (Book #3)

After defeating the skeleton army invasion, things get awfully quiet at Battle Station Prime. School is in session, and the students are finally falling into a routine. One ordinary day, while Pell is daydreaming about a life of adventure, his ears perk up. His teacher speaks of a magical realm with an enchanted sword that only a true hero — the Chosen One — can possess.

After reading more about the legend, clues in the text make Pell think that he may be the Chosen One and this is his calling. Pell enlists the help of Logan and Maddy to embark on a hero’s quest. To their surprise, as they set out, they are joined by others who believe that the hero’s quest is theirs. At first, the opposing groups compete to see who can find the magical realm and get to the sword first, but as the going gets tough, the teams must work together to cross the challenging frozen landscape, battling natural enemies and using their survival skills.

As the groups get closer to their goal, they uncover secrets long hidden about the true nature of one of their fellow travelers: that the Chosen One has been traveling with them all along, and it’s someone they never suspected.

Cara J. Stevens has a deep and abiding love for video games, science fiction and writing. She began her career designing interactive games and stories based on books and is happy to come full circle, creating stories based on video games. She has written nine other books for kids, including the novel Dragon School. When she’s not writing or hanging out at the beach, she can be found playing pinball, WiiU, and classic Atari games. Cara lives in Old Greenwich, Connecticut with her husband, two children, and a loud, fluffy dog named Oliver.

Sam Needham is a 2D and 3D animator and Illustrator who enjoys making art for the games, film, television, and comic book industries.