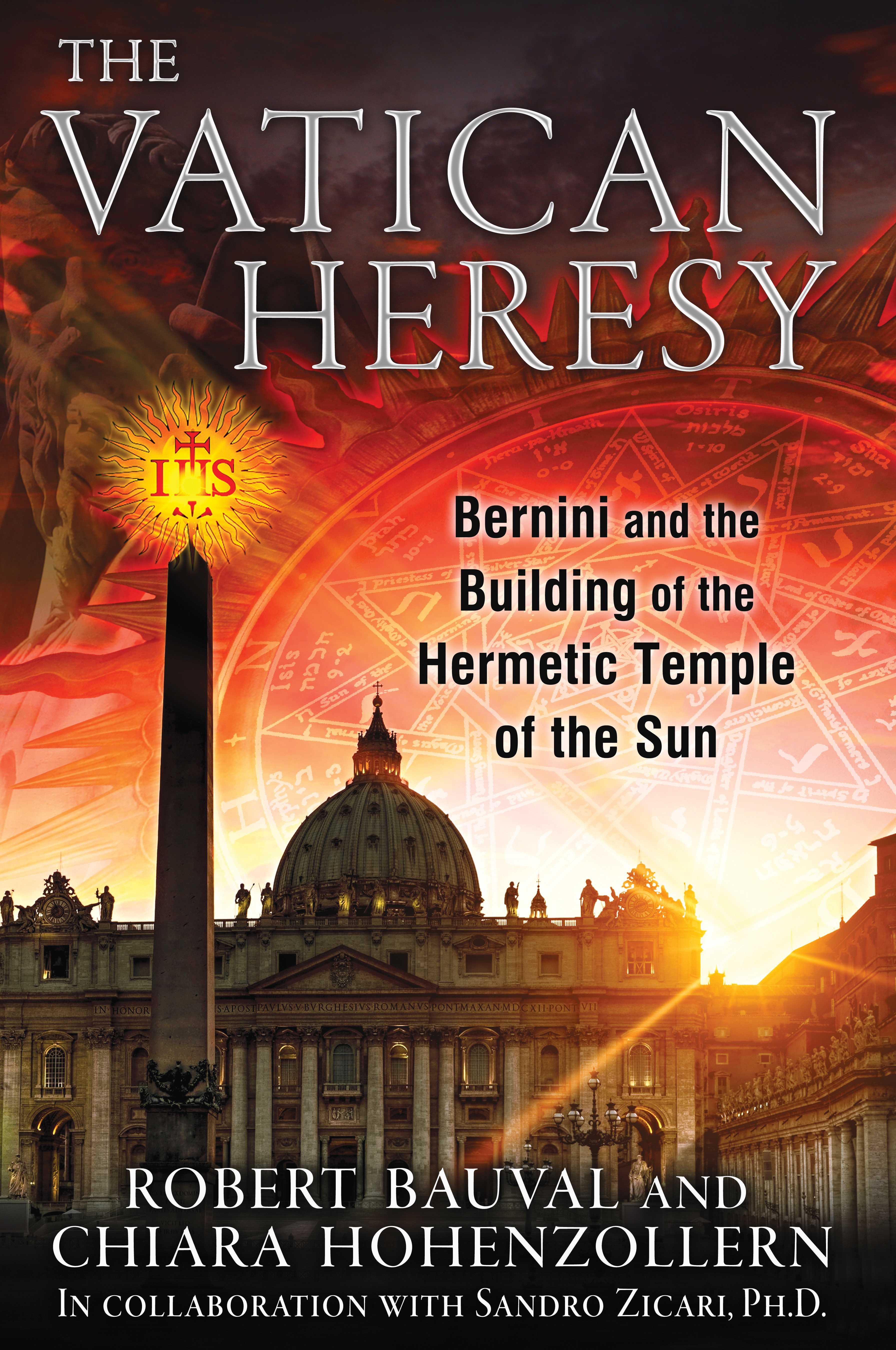 Bernini and the Building of the Hermetic Temple of the Sun

Reveals how the largest Sun Temple in the world, built according to Hermetic principles, is located at one of Christianity’s holiest sites: the Vatican

• Reveals how the design was masterminded by Bernini, Jesuit scholars, the mystical Queen Christine of Sweden, and several popes

In 16th century Italy, in the midst of the Renaissance, two powerful movements took hold. The first, the Hermetic Movement, was inspired by an ancient set of books housed in the library of Cosimo de’ Medici and written by the Egyptian sage Hermes Trismegistus. The movement expounded the return of the “true religion of the world” based on a form of natural magic that could draw down the powers of the heavens and incorporate them into statues and physical structures. The other movement, the Heliocentric Movement launched by Copernicus, was a direct challenge to the Vatican’s biblical interpretation of a geocentric world system. Declared a heresy by the Pope, those who promoted it risked the full force of the Inquisition.

Exploring the meeting point of these two movements, authors Robert Bauval and Chiara Hohenzollern reveal how the most outspoken and famous philosophers, alchemists, and scientists of the Renaissance, such as Giordano Bruno and Marsilio Ficino, called for a Hermetic reformation of the Christian religion by building a magical utopic city, an architectural version of the heliocentric system. Using contemporary documents and the latest cutting-edge theses, the authors show that this Temple of the Sun was built in Rome, directly in front of the Vatican’s Basilica of St. Peter. They explain how the Vatican architect Bernini designed St. Peter’s Square to reflect the esoteric principles of the Hermetica and how the square is a detailed representation of the heliocentric system.

Revealing the magical architectural plan masterminded by the Renaissance’s greatest minds, including Bernini, Jesuit scholars, Queen Christine of Sweden, and several popes, the authors expose the ultimate heresy of all time blessed by the Vatican itself.

CHAPTER 1
THE TRUE RELIGION OF THE WORLD

The story we are about to tell is as strange as it is controversial. If we are right, then Roman Christianity, indeed perhaps all of Christianity, is about to be turned on its head. Most Christians today are unaware that not so long ago a handful of very wise and very brave philosophers kick-started an intellectual and spiritual revolution in a seemingly impossible bid to reform the church into a very different thing indeed. Their mission was to liberate Christianity from the stranglehold of an oppressive clergy and their dogmas and turn it into a magical religion of Nature, the “True Religion of the World,” governed by wise and benevolent philosopher-priests from a “City of the Sun” set in the heart of Christendom: Rome. The task we have set for ourselves is to chronicle the mission of these most extraordinary men and women and to seek this legendary and magical City of the Sun. The historical period we shall explore is known as the Renaissance--literally the Rebirth--when Europe

. . . [was] seeking intensively for knowledge of reality, for an answer to its problems, which normal education failed to give. . . . It turned to other ways of seeking an answer: intuitive, mystical, magical . . . it sought to cultivate the intuitive faculty of man.

Spanning two centuries from 1460 to 1675, the cultural rebirth that we will cover was kick-started in the city of Florence. There, in a Europe slowly emerging from the throngs of the Dark and Middle Ages, wearied by the oppression of the church, sickened by the centuries of crusading wars, and spiritually depleted by the rampant religious bigotry, intrigue, and hypocrisy, a few enlightened men displayed amazing grit by questioning and even challenging the ecclesiastical establishment and boldly stood out to express their new vision for healing the world. Often working singlehandedly, their common mission was to peacefully bring about a great reformation of the Vatican and, by extension, of Christendom as a whole. They were the Renaissance Philosophers, or as some historians sometimes call them, the Hermetic Magicians. Highly learned, highly eloquent, and highly motivated, their powerful weaponry was not the sword but the pen and the word. Working in dimly lit rooms and often by candlelight, they poured their intellectual epiphanies into books, tracts, and theses that promoted a theology and philosophy of a lost golden age, which was compatible with the new scientific discoveries and, more importantly, human dignity and intellectual freedom.

We shall propose to focus our investigation on three major movements whose influence, we believe, led to actual construction of the elusive “Hermetic City of the Sun.” These movements were Hermetism, Heliocentrism, and Utopianism. Although caught up in a parallel crisis that befell Christendom, named the Protestant Reformation and the Catholic Counter-Reformation, the strong mental brew these movements created when merged together provided the cerebral fuel for the Renaissance and, as some historians are also inclined to believe, the subsequent
Age of Discovery and Enlightenment. But on a deeper, more occult level these movements, especially Hermeticism, created a sort of spiritual-cum-intellectual time bomb that was to explode at the very threshold of the Vatican.

The Hermetic Movement
This was a concerted attempt to restore the “magical religion of ancient Egypt” as rediscovered in the Corpus Hermeticum or Hermetica, a body of books believed to be the work of an all-wise, all-knowing Egyptian sage called Hermes Trismegistus. The Renaissance philosophers saw in the Hermetica a powerful perennial theology that elevated man to divine status through the pursuit of knowledge (gnosis). Most, but not all, Renaissance philosophers desperately tried to have it embraced, even canonized by the Vatican, sometimes at the cost of their lives.

The Heliocentric Movement
This was the new scientific discoveries of Nicolas Copernicus, Johannes Kepler, and Galileo, essentially that not the Earth but the Sun was the center of the visible universe. Unfortunately the Vatican upheld that such discoveries were against Holy Scriptures and, as a consequence, forcefully repudiated them and declared them a vile heresy. In spite of this, some Renaissance philosophers audaciously tried to convince the Vatican to recognize it and embrace it, again at the risk of their own lives.

The Utopian Movement
This movement promoted the founding of idealistic republics or citystates where people could live and prosper in relative harmony and peace. The utopian city-state that we are primarily interested in is the so-called City of the Sun, a sort of hybrid of theocracy-democracy headed by an enlightened philosopher-scientist-priest. With the split of Western Christendom into Protestantism and Catholicism, and the bloody genocidal Reformation and Counter-Reformation that ensued, the Renaissance Philosophers desperately tried to reunite Christendom under a reborn perennial theology administered from a centralized City of the Sun. Interestingly, the Jesuit Order was to use virtually the same approach in their missionary zeal to convert the New World, Asia, and Africa into Roman Catholicism.

Geocentrism versus Heliocentrism
Geocentrism, or Earth-centrism, is the (erroneous) astronomical model in which the sun and all other celestial bodies orbit/revolve around the Earth. The theory had already been advanced by Aristotle in ca. 340 BCE but was fully developed by Claudius Ptolemy of Alexandria in the second century CE in his book The Almagest. The Ptoloemaic System was favored, indeed voraciously supported by the Catholic Church because it was deemed to conform with various statements in Holy Scriptures implying that the Earth was stationary and immovable and that all celestial bodies revolved around it. For example, in 1 Chronicles 16:30 “the world also shall be stable, that it be not moved.”
Robert Bauval

Egyptian-born Robert Bauval began studying Egyptology in 1983. His first book, The Orion Mystery, was published in 1994, becoming a number-one bestseller translated into more than 25 languages. His research has been featured in documentaries throughout the world. He lives in Torremolinos, Spain.

Chiara Hohenzollern is a journalist who specializes in science and history. She lives in Rome, Italy.

“Robert Bauval is a brilliant investigator of the hidden corners of history, and he has surpassed himself with The Vatican Heresy. It is a true time bomb of a book revealing stunning intrigues that have shaped the modern world and that call into question our most fundamental perceptions of the role of the Church of Rome.”

– Graham Hancock, author of War God and Fingerprints of the Gods

“With his usual care and attention to detail, Robert Bauval spins out the thread that joins the solar religion of pharaonic Egypt to the utopian hopes of the fading Renaissance. His theory climaxes with the dramatic and dangerous project of a pope (Urban VIII), a polymath (Kircher), an architect (Bernini), and an exiled queen (Christina). Their dream was of a united Christendom orbiting around Rome; their method, the marriage of Hermetic philosophy with the new astronomy, through symbolic architecture. Like Bauval’s other books about times and places when science and magic were one, The Vatican Heresy arouses curiosity, disbelief, nostalgia, and finally hope.”

– Joscelyn Godwin, Ph.D., author of The Pagan Dream of the Renaissance and Athanasius Kircher’s

“In this enchanting book, Robert Bauval and Chiara Hohenzollern reveal an astonishing fact hiding in plain sight. Surely thousands of visitors to the Vatican’s Saint Peter’s Square over the past three centuries have been puzzled by the gigantic ancient Egyptian obelisk featured in its center. Through meticulous research, The Vatican Heresy illuminates the profoundly evolutionary adventurers who employed deep symbolic insights and astute political maneuvering to construct a talismanic Hermetic City of the Sun in the heart of the citadel of Christendom. Read The Vatican Heresy. . . . I couldn’t put it down.”

“It looks like Robert Bauval (now with coauthor Chiara Hohenzollern) has done it again, revealing that not just the pyramids but the Vatican itself is a celebration of sacred architecture. A fascinating theory and very timely.”

– Adrian G. Gilbert, coauthor of The Orion Mystery and author of Secrets of the Stone of Destiny

Bernini and the Building of the Hermetic Temple of the Sun