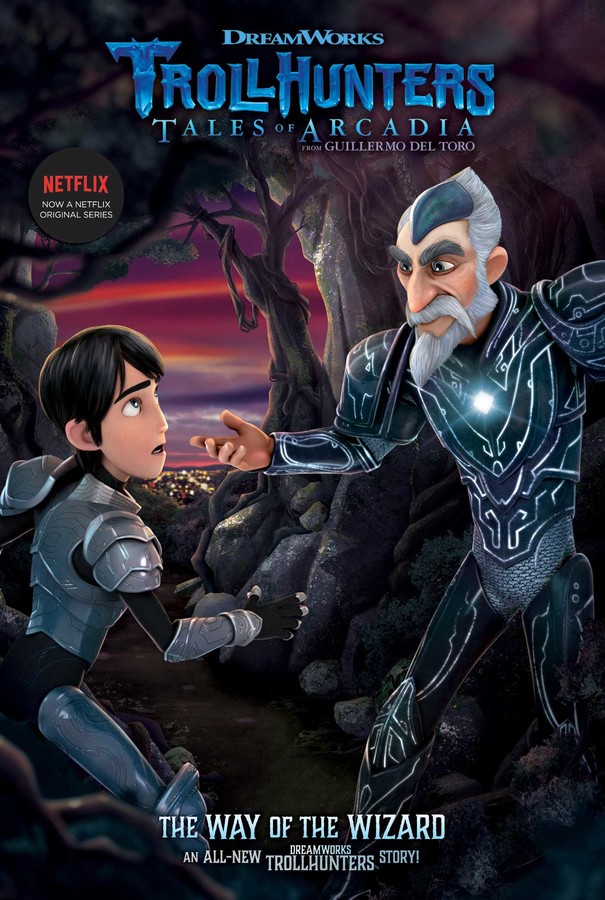 The Way of the Wizard

Jim prepares to fight a Troll civil war in this all-new epic story based on the hit Netflix series Trollhunters—from the limitless imagination of acclaimed filmmaker Guillermo del Toro and DreamWorks Animation.

Jim and the Trollhunters team have finally found the wizard Merlin, but at a terrible cost. One of their beloved Troll friends has fallen in battle. Jim must now come to terms with true, lasting death for the first time in his young life. But there is little time to mourn—Jim must reclaim his fighting spirit because a civil war is about to commence among the various underground Troll communities. If not controlled, it will spill into the human world. Once again the fate of the entire planet rests on Jim’s shoulders. Will he be able to shoulder these epic responsibilities?

This book includes full-color glossy inserts with images from the show!

The Way of the Wizard CHAPTER 1 REST IN PIECES
Twelve hundred years after his birth, Draal the Deadly was dead.

Jim Lake Jr. dropped to his knees. He stared wordlessly at the lifeless stone body of the Troll, the bodyguard, the friend who’d fallen to his death so that Jim might live. It had taken the young human Trollhunter a while to descend into the geode pit, to scale the massive white crystals studding its walls. The fact that Jim’s clothes and shoes were waterlogged—the result of his recent escape from a submerged catacomb—hadn’t helped during the arduous, slippery climb. But now that he’d reached the bottom and seen Draal’s remains illuminated in the crystals’ harsh glare, Jim didn’t know what to do next.

When Jim and Draal had first met, it was as enemies. Draal believed the Amulet should have chosen him, not some fleshbag, after leaving its previous champion—Draal’s own father, Kanjigar. And so Draal challenged Jim to trial by combat, only for the newly minted Trollhunter to best his blue, spiked opponent. Even more surprising, though, was the way Jim broke with Troll custom afterward and spared Draal’s life. As a means of repayment, the humbled son of Kanjigar made an oath to guard the Trollhunter, his mother, and their home.

And Draal had indeed kept his promise, protecting Jim’s loved ones and training the Trollhunter in swordsmanship. The loyal Troll had even sacrificed his own right arm to thwart one of Gunmar’s earlier attempts to escape the Darklands. Now, Jim understood, Draal had sacrificed the rest of his body in service of his beloved Trollhunter—just as the Gumm-Gumm king had eventually succeeded in returning to the surface world. But to lose Draal, with Gunmar still alive and free, seemed so pointless to Jim . . . so unfair . . . so unreal . . .

For a while, all Jim heard was the soft pat of teardrops against his knees, adding to the denim’s dampness. Then, from a respectful distance, a voice softly said, “Master Jim?”

The Trollhunter stood, quickly wiping his eyes with the back of his sleeve. He saw his six-eyed Troll mentor, Blinky, reach the base of the pit, followed by the rest of his soaking-wet friends—Claire Nuñez, Toby Domzalski, and AAARRRGGHH!!!

Claire hugged Jim, the streak in her hair all the whiter under the crystals’ light. She said, “We got worried when you didn’t come back up. We thought maybe you and Angor Rot—”

Jim’s mind flooded with hatred for the assassin who’d killed Draal. Team Trollhunters had long believed Angor Rot dead, only to discover he was back and working for Gunmar. And Jim had been so focused on stopping Gunmar earlier, he hadn’t noticed Angor Rot stalking behind him, his dagger laced with lethal Creeper’s Sun poison. But Draal noticed. Draal put his body between Jim and the dagger. Draal turned to stone and fell to his doom. Not Angor Rot. Not Gunmar. Not Jim.

Claire looked up at Jim, her wide eyes searching his. He looked away and said, “Angor Rot’s gone. He must’ve escaped this pit and the mountain above us somehow. I . . . I’m sorry I made you worry, Claire. All of you. I guess I just wanted to be alone for a bit. . . .”

Toby joined Jim and Claire, making it a group hug, and said, “No disrespect, Jimbo, but when someone says they want to be alone, that’s usually the time not to leave them alone.”

The warm reunion ended when they heard a panicked yell, followed by a tremendous racket. Seconds later, an old, bearded figure landed on the floor in front of them. The latecomer dusted off his emerald armor, adjusted his skullcap, and said, “Greetings, everyone. What’d I miss? Besides that third crystal step, that is?”

“Dude, are you sure you’re Merlin?” asked Toby. “I know you just took us on a magical tour of Troll history, but I always pictured someone a lot less . . .”

“All the above,” finished Toby.

“Ah yes, kick the wizard when he’s down, is it?” muttered Merlin. “As if all your legs would work properly after a thousand-year slumber? Why, if you hadn’t let my Staff of Avalon fall into Gunmar’s claws, I’d use it to teach the lot of you some manners—starting with the chatty one who smells of toffee.”

“To-may-toe, toe-mah-toe,” said Merlin. “And tell me something. Is everyone in this era always this dour? I’ve seen happier faces at a funeral—”

The six-eyed Troll nodded toward Jim, who had returned to Draal’s side. Blinky leaned closer to the wizard and, in a low voice, added, “Perhaps you might impart some wise words of comfort to our Trollhunter?”

“Hmm? Oh yes,” said Merlin absentmindedly. “Yes, I suppose I could say something to bolster the boy’s resolve.”

Jim and the others watched as the wizard stood over Draal and held out his hands with great authority, as if about to cast a powerful spell. Merlin cleared his throat and closed his eyes.

“Here lies a warrior true, his words were few, and mostly said as a battle cry,” he began.

“It’s such a shame, er, with Gumm-Gumms to blame, that Draal’s gone to that big Hero’s Forge in the sky,” Merlin finished in a rush, clearly making up that last part on the fly.

Startled by the eulogy’s abrupt conclusion, every single member of Team Trollhunters glared at the wizard. But none more so that Jim.

“Not! Helping!” Blinky snapped at Merlin.

Claire arched an angry eyebrow, and one didn’t have to be a sorcerer to understand what the look meant: Not cool. She shook her head, turned toward her boyfriend, and said, “Don’t listen to him, Ji—”

Claire cut off. She saw Draal’s stilled form, but no Jim keeping vigil over it. Team Trollhunters then heard the squeak of Jim’s wet sneakers as he climbed out of the geode pit.

“I’d better talk to him,” said Toby, hitching up his pants in preparation of the long ascent.

Toby and AAARRRGGHH!!! shared a silent fist bump before the musclebound Krubera Troll bounded up the white crystals after Jim. Blinky pinched the space between his many eyes in frustration and said, “How could a wizard be so clueless when it comes to human feelings?”

“I, Merlin, am clueless?!” Merlin repeated with umbrage.

“Aha! You admitted it! No take-backs!” said Toby, flashing a braces-filled smile.

“?‘Take-backs’?” Merlin said in confusion. “What are ‘take-backs’? Some breed of Goblin or Gnome or some such?”

As Toby explained “take-backs” to the fascinated wizard, Claire turned to Blinky and said, “This is bad. I’ve never seen Jim so upset, and Gunmar and Angor Rot have a major head start on us.”

“Agreed,” Blinky said, rubbing his chin in thought. “Our considerable loss here at Merlin’s Tomb has brought Gunmar one step closer to the prophesied Eternal Night. I suggest we table our grief for the moment and return to Arcadia Oaks posthaste.”

“You don’t have to tell me twice, Blink,” said Claire. “As soon as we get out of this magic-free mountain, I can shadow-jump us to—”

“Ahem,” interrupted Merlin. “There won’t be any ‘shadow-jumping.’?”

“Because there’s an even faster way back? Like a super wizard gyre?” asked Toby. “Word of warning, though. I don’t do so well on gyres. Especially after Taco Tuesdays.”

“No,” Merlin said flatly. “No gyres, no Shadow Staffs, no travel spells. And no tacos.”

Blinky did some quick mental math and said, “Merlin, the distance between your mountain and Arcadia is more than seven thousand miles! How, exactly, do you propose we return home?”

Richard Ashley Hamilton is best known for his storytelling across DreamWorks Animation’s How to Train Your Dragon franchise, having written for the Emmy-nominated Dragons: Race to the Edge on Netflix and the official Dragons Expanded Universe bible. In his heart, Richard remains a lifelong comic book fan and has written and developed numerous titles, including Trollhunters (with Marc Guggenheim) for Dark Horse Comics and his original series Scoop for Insight Editions. Richard lives in Silver Lake, California, with his wife and their two sons.

The Way of the Wizard