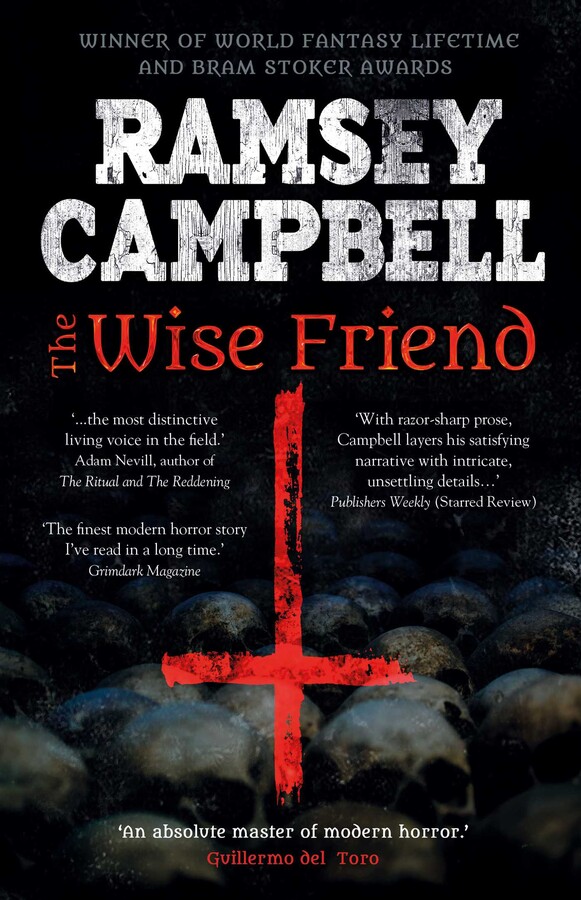 Patrick Torrington’s aunt Thelma was a successful artist whose late work turned towards the occult. While staying with her in his teens he found evidence that she used to visit magical sites. As an adult he discovers her journal of her explorations, and his teenage son Roy becomes fascinated too. His experiences at the sites scare Patrick away from them, but Roy carries on the search, together with his new girlfriend. Can Patrick convince his son that his increasingly terrible suspicions are real, or will what they’ve helped to rouse take a new hold on the world?

"With razor-sharp prose, Campbell layers his satisfying narrative with intricate, unsettling details to create the feeling of glimpsing something strange out of the corner of one’s eye. Fans of cerebral, slow-burning horror will enjoy this twisty treat."

"Another towering achievement from one of the genre's living legends."

"The Wise Friend is a lyrical and trippy build of the uncanny to a crescendo of the weird. No one writes horror like Ramsey Campbell, or transforms the mundane world in such strange, ghastly and wondrous ways. Still the most distinctive living voice in the field. The Poet Laureate of the supernatural in fiction."

"A truly haunting tale and an example of a master at work."

“The Wise Friend suggests more than shows. It is a slow-burning horror novel that hints at demonic activity without giving everything away until the very end.”

“Apart from Campbell’s acumen in the art of disturbing us, one fixed point may be observed about his writing – the sheer elegance in the use of language; a skill that is fully in place here.”

"The Wise Friend is a first-rate cautionary tale of a father who looks a little too deeply into mysteries whose allure he could never resist at any age and the mistake of bringing his son in on the secret. It’s allegorical, too – rarely has the truth of coming of age and the discoveries that brings about been told with such a deft stroke. Ramsey Campbell is known as an absolute master for a reason."

"The Wise Friend is a masterclass of unease and narrative drive, and pretty much un-putdownable."

“Engaging, thrilling, and a horribly-addictive page-turning horror novel. The imagery will have lasting effects.”

"Ramsey Campbell has already left nearly every other weird writer, past or present, in the dust; and this new novel only cements the lofty reputation he has achieved through a lifetime of stellar work."

SEE ALL
See more by Ramsey Campbell
Thank you for signing up, fellow book lover!