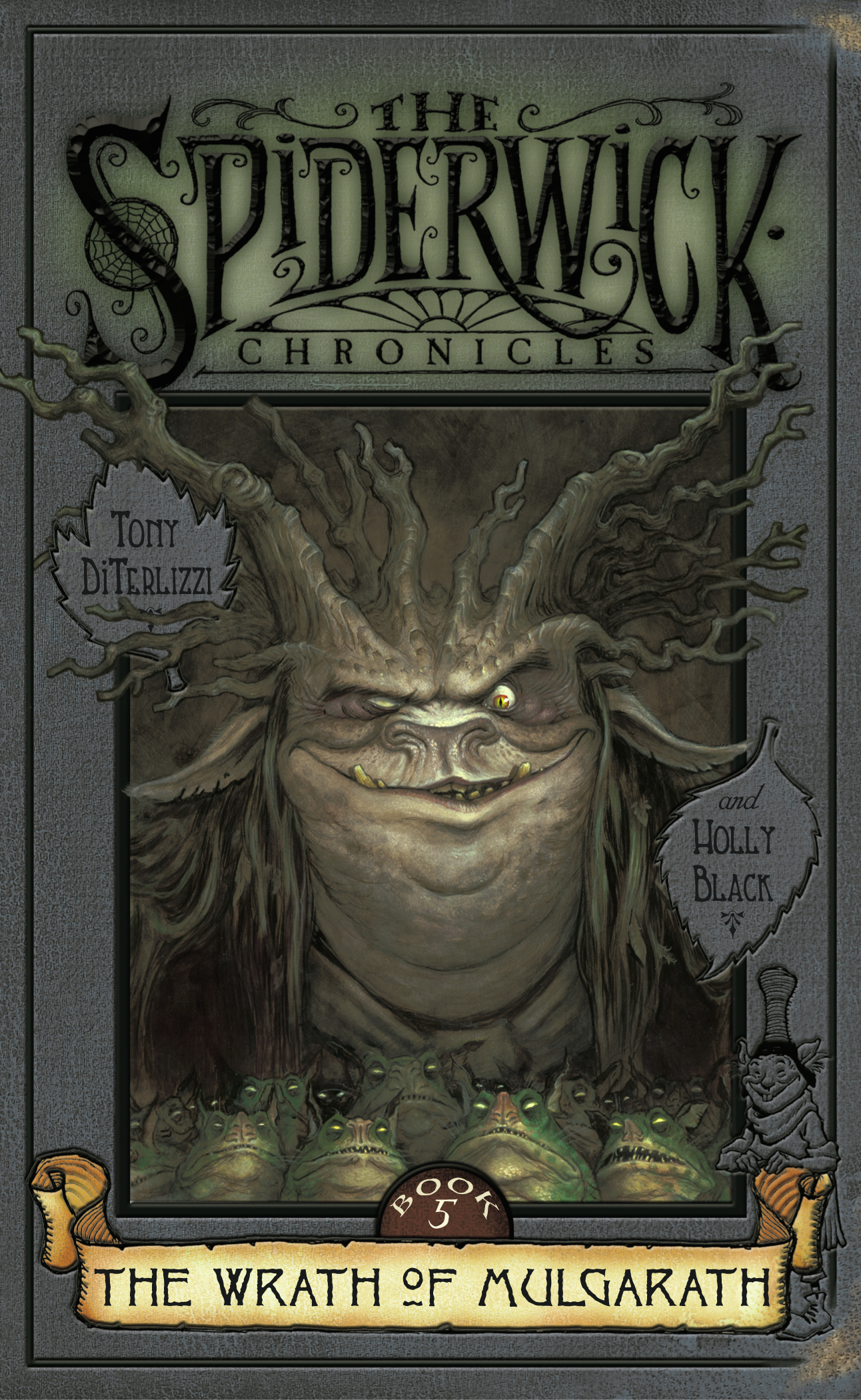 Three ordinary kids, Jared, Simon, and Wallory Grace, have entered another world -- without leaving this one! Two remarkable talents, New York Times best-sellers Tony DiTerlizzi and Holly Black, have risked everything to bring this remarkable account to light. Five books -- one thrilling adventure -- the Spiderwick Chronicles!
Their world is closer than you think.

Chapter One: IN WHICH the World Is Turned Upside Down

The pale light of the newly risen sun made the dew shimmer on the nearby grass as Jared, Mallory, and Simon trudged along the early morning roads. They were tired, but the need to get home kept them going. Mallory shivered in her thin white dress, clutching her sword so hard that her knuckles went white. Beside her, Simon shuffled along, kicking stray bits of asphalt. Jared was quiet too. Each time his eyes closed, even for a moment, all he saw were goblins -- hundreds of goblins, with Mulgarath at their head.

Jared tried to distract himself by planning what he would say to his mother when they finally got home. She was going to be furious with them for being gone all night and even madder at Jared because of that thing with the knife. But he could explain everything now. He imagined telling her about the shape-shifting ogre, the rescue of Mallory from the dwarves, and the way they had tricked the elves. His mother would look at the sword and she would have to believe them. And then she would forgive Jared for everything.

A sharp sound, like a tea kettle whistling at full volume, snapped him back to the present. They were at the gate of the Spiderwick estate. To Jared's horror, trash, papers, feathers, and broken furniture littered the lawn.

"What is all that?" Mallory gasped.

A screech drew Jared's eyes upward, where Simon's griffin was chasing a small creature around the roof and knocking pieces of slate loose. Stray feathers drifted over the roof tiles.

"Byron!" Simon called, but the griffin either didn't hear or chose to ignore him. Simon turned to Jared in exasperation. "He shouldn't be up there. His wing is still hurt."

"What's he after?" Mallory asked, squinting.

"A goblin, I think," said Jared slowly. The memory of teeth and claws red with blood awakened a horrible dread within him.

"Mom!" Mallory gasped, and began to run toward the house.

Jared and Simon raced after her. Up close they could see that the windows of the old estate were smashed and the front door hung by a single hinge.

They darted inside, through the mudroom, stepping over scattered keys and torn coats. In the kitchen, water poured from the faucet, filling a sink piled with broken plates and spilling onto the floor, where food from the overturned freezer was defrosting in wet piles. The wallboard had been punched open in places, and plaster dust, mingling with spilled flour and cereal, covered the stove.

The dining room table was still upright, but several of the chairs were knocked over, their caning ripped. One of their great-uncle's paintings was slashed and the frame was cracked, although it still hung on the wall.

The living room was worse: The television was shattered and their game console had been shoved through it. The sofas were ripped open, and stuffing was scattered across the floorboards like drifts of snow. And there, sitting on the remains of a brocade footstool, was Thimbletack.

As Jared moved closer to the little brownie, he could see that Thimbletack had a long, raw scratch on his shoulder and that his hat was missing. He blinked up at Jared with wet, black eyes.

"All my fault, all my fault," Thimbletack said. "I tried to fight; my magic's too slight." A tear rolled down his thin cheek, and he wiped it away angrily. "Goblins alone I might have driven off. The ogre just looked at me and scoffed."

"Where's Mom?" Jared demanded. He could feel himself trembling.

"Just before the break of day, they bound her and carried her away," Thimbletack said.

"They can't have!" Simon's voice was close to a squeak. "Mom!" he called, rushing to the stairs and shouting up to the next landing. "Mom!"

"We have to do something," said Mallory.

"We saw her," Jared said softly, sitting down on the ruined couch. He felt light-headed, and hot and cold at the same time. "At the quarry. She was the adult the goblins had with them. Mulgarath had her, and we didn't even notice. We should have listened -- I should have listened. I never should have opened Uncle Arthur's stupid book."

The brownie shook his head vigorously. "To protect the house and those inside is my duty, Guide or no Guide."

"But if I had destroyed it like you said, none of this would have happened!" Jared punched himself in the leg.

Thimbletack scrubbed his eyes with the heel of his hand. "No one knows if that is true or not. I hid it away -- see what we got?"

"Enough with the pity party -- neither of you is helping!" Mallory squatted beside the footstool, handing the brownie his hat. "Where would they have taken Mom?"

Thimbletack shook his head sadly. "Goblins are filthy things, the master worse than his hirelings. They would dwell somewhere as foul as they, but where that is, I cannot say."

From above them there was a whistle and a clatter.

"One goblin is still on the roof," said Simon, looking up. "It must know!"

Jared stood up. "We'd better stop Byron before he eats it."

The three kids ran up the steps and down the hall toward the attic. The bedroom doors on the second floor were open. Torn clothing, pillow feathers, and ripped bedding spilled out into the hall. Outside Jared and Simon's shared room, cracked, empty tanks lay on the floor. Simon froze, a stricken expression on his face.

"Come on," Jared said. As he steered Simon away from the wreckage of their room, he caught sight of the hall closet. The shelves were dripping with lotions and shampoos, which had also soaked the scattered towels. And at the bottom, near deep scratches in the wallboard, the secret door to Arthur's library had been ripped off its hinges.

"How did they find it?" Mallory asked.

Simon shook his head. "I guess they ransacked the place looking for it."

Jared crouched down and wriggled into Arthur Spiderwick's library. Bright sunlight streaming through the single window showed the damage clearly. Tears burned his eyes as he stepped across a carpet of shredded pages. Arthur's books had been ripped free of their bindings and scattered. Torn sketches and toppled bookshelves littered the floor. Jared looked around the room helplessly.

"Come on," Simon called. "We have to get that goblin."

Jared nodded his head, despite the fact that neither his brother nor his sister could see him, and moved numbly toward the door. There was something about the desecration of this one room -- a room that had remained secret all these years -- that made Jared feel as though nothing would ever be right again.

Together he, Simon, and Mallory trudged up the stairs to the attic, crossing over glittering pieces of smashed holiday ornaments and stepping past a broken dress form. In the dim light Jared could see dust erupting in time with the clattering of griffin claws, and he could hear more screeching above them.

"One more level and we can step right onto the roof," Jared said, pointing to the final staircase. It led to the single highest room in the house, a small tower with half-boarded windows on all four sides.

"I think I heard some barking," Simon said as they climbed. "That goblin must still be okay."

When they reached the top of the tower, Mallory swung her sword at the window boards, splintering them. Jared tried to pry off what was left loose.

"I'll go first," Simon said, hopping onto the ledge and gingerly climbing past the jagged slats and onto the roof.

"Wait!" Jared shouted. "What makes you think you can control that griffin?" But Simon didn't seem to be paying attention.

Mallory strapped on a belt, wrapping it around the sword so it hung from her hip. "Come on!"

Jared swung his legs over the sill and stepped out onto the slate. The sudden sunlight almost blinded him, and for a moment his blurry eyes scanned the forest beyond their lawn.

Then he saw Simon approaching the griffin, who had cornered the goblin against one of the brick chimneys. The goblin was Hogsqueal.

Holly Black is the author of bestselling contemporary fantasy books for kids and teens. Some of her titles include The Spiderwick Chronicles (with Tony DiTerlizzi), the Modern Faerie Tales series, the Curse Workers series, Doll Bones, The Coldest Girl in Coldtown, The Darkest Part of the Forest, the Magisterium series (with Cassandra Clare), and the Folk of the Air series. She has been a finalist for the Mythopoeic Award, a finalist for an Eisner Award, and the recipient of both an Andre Norton Award and a Newbery Honor. She lives in New England with her husband and son in a house with a secret door. Visit her at BlackHolly.com.

More books in this series: The Spiderwick Chronicles