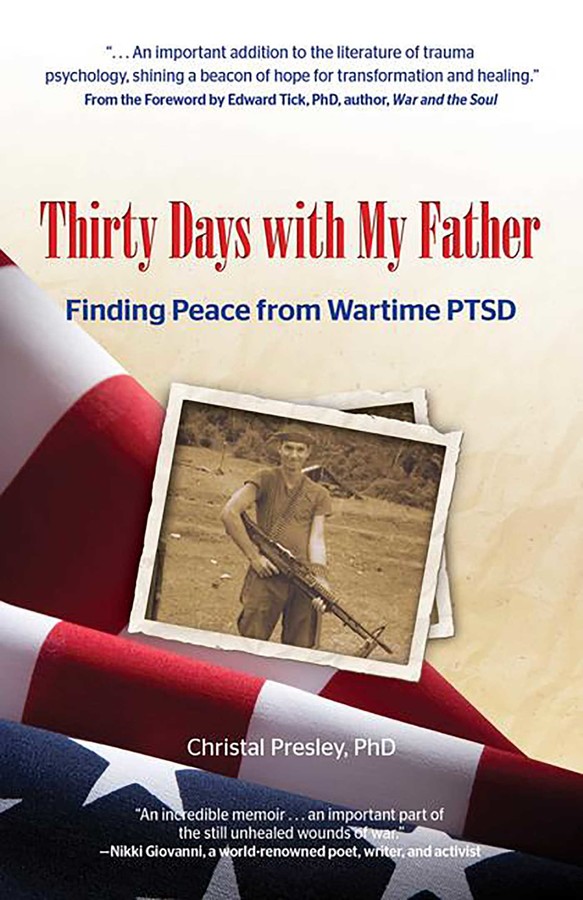 Thirty Days with My Father

"Whether you are a professional who treats veterans and their loved ones, or a person at risk for military PTSD, or anyone who cares, you will be profoundly moved by this eloquent memoir."
—Frank Ochberg, MD, award-winning mental health expert who helped define the term "post-traumatic stress disorder"

"An incredible memoir . . . an important part of the still unhealed wounds of war. Christal has given as much of her heart to this story as her father gave to his country."
—Nikki Giovanni, world-renowned poet, writer, activist, and educator

"Thirty Days with My Father is an important addition to the literature of trauma psychology, shining a beacon of hope for transformation and healing."
—From the Foreword by Edward Tick, PhD, author, War and the Soul and founding co-director, Soldier's Heart

"To me, post-traumatic stress disorder was just a bunch of words. All I knew was that it had something to do with my father's brain, and he seemed to be going crazy. And I knew it was bad because my mom told me that if anyone found out how sick he was, they'd come and take him away forever, and they'd take me away too, and she couldn't live like that. If he had to be that sick, I wanted him to have something everybody could understand. So I picked brain cancer."
—From Thirty Days with My Father

When Christal Presley's father was eighteen, he was drafted to Vietnam. Like many men of that era who returned home with post-traumatic stress disorder (PTSD), he was never the same. Christal's father spent much of her childhood locked in his room, gravitating between the deepest depression and unspeakable rage, unable to participate in holidays or birthdays. At a very young age, Christal learned to walk on eggshells, doing anything and everything not to provoke him, but this dance caused her to become a profoundly disturbed little girl. She acted out at school, engaged in self-mutilation, and couldn't make friends. At the age of eighteen, Christal left home and didn't look back. She barely spoke to her father for the next thirteen years.

To any outsider, Christal appeared to be doing well: she earned a BA and a master's, got married, and traveled to India. But despite all these accomplishments, Christal still hadn't faced her biggest challenge—her relationship with her father. In 2009, something changed. Christal decided it was time to begin the healing process, and she extended an olive branch. She came up with what she called "The Thirty Day Project," a month's worth of conversations during which she would finally ask her father difficult questions about Vietnam. Thirty Days with My Father is a gritty yet heartwarming story of those thirty days of a daughter and father reconnecting in a way that will inspire us all to seek the truth, even from life's most difficult relationships. This beautifully realized memoir shares how one woman and her father discovered profound lessons about their own strength and will to survive, shedding an inspiring light on generational PTSD.

"I recommend this powerful book to anyone who wants to better understand the personal aspects of post-traumatic stress disorder."--David Wilson, VVA Veteran Magazine

"Thirty Days With My Father, by Christal Presley, is an interesting, original book, in that it deals with Post Traumatic Stress Disorder (PTSD) brought about in a family as a result of the father's service in the Vietnam War. It is a book that had to be written, as no one, to the reviewer's knowledge, has written such a book, which no doubt will prove helpful to people suffering the same fate as the author and her family."—Alma H. Bond, Midwest Book Reviews

Thirty Days with My Father: Finding Peace from Wartime PTSD Christal Presley. HCI, $14.95 trade paper (264p) ISBN 978-0-7573- 1646-3 A soldier's return home from war is often just the beginning of another, more internalized battle. In her memoir, Presley recounts 30 days of interviews with her Vietnam veteran father—conversations in which she attempts to understand her father, his PTSD, and her own lifetime of vicarious traumas. Each day is given a chapter, and each chapter concludes with a "Journal" entry that revisits Presley's tumultuous childhood memories. What emerges from this format is a harrowing portrait of the past's ability to haunt the present; Presley's descriptions of the troubled child she was blend all too easily into the confused and searching adult she becomes. In some cases, she is compelled to go to a Veterans Affairs hospital and even to Vietnam. The book's division into 30 days feels increasingly forced and fragmented with the passing of each chapter. Such a story is, by its very nature, fractured, and by the end of the book Presley's father is no less tormented than he was at Day One. Yet Presley has found stability in her father's story, and her willingness to share it—and her own revelations—will be appreciated by readers who deal with any form of wartime PTSD. (Nov.)--Publishers Weekly

Thirty Days with My Father is an unforgettable account of a daughter struggling to find connection with herself and her father in the aftermath of war. Christal Presley's memoir is a truly inspiring portrayal of survival, forgiveness, and love."–Jessica Handler, author of Invisible Sisters: A Memoir.

Thirty Days With My Father: Finding Peace from Wartime PTSD by Christal Presley uses memory and flashback to create a riveting and ultimately loving account of a child terribly affected by her Vietnam Veteran father's PTSD. This intergenerational trauma threatens to break the bonds between father and daughter. However, with great courage to face the darkness and great love to heal the wounds, this book is also a journey towards joy—and how a daughter and her father finally find their way back to each other.' –Louise Nayer, author of Burned

An incredible memoir. I think Thirty Days with My Father is an important part of the still unhealed wounds of wars.  Christal has given as much of her heart to this story as her father gave to his country. This is not a journey to miss.' –Nikki Giovanni (University Review)

Christal Presley is uniquely equipped to tell a tale that affects not only her generation, but that must be understood if we are to prevent second generation PTSD in the sons and daughters of our current wave of returning veterans.   Whether you are a professional who treats veterans and their loved ones, a person at risk for military PTSD, or anyone who cares, you will be profoundly moved by this eloquent, true memoir.' –Frank M Ochberg, MD, Clinical Professor of Psychiatry, Michigan State University

Important and beautifully written, Presley's memoir is a welcome and much-needed contribution to the genre.' –Melody Moezzi, award-winning author and mental health advocate

It is a book that had to be written... which no doubt will prove helpful to people suffering the same fate as the author and her family.--Alma Bond, Midwest Review

Though Thirty Days with My Father is close-up and personal, one daughter's attempt to break through her father's post-traumatic stress syndrome following Vietnam, it is also a big, big story which affects many Americans—–not only soldiers and veterans, as Christal Presley makes clear, but also their entire families, especially the children. Thirty Days with My Father is a beautifully written, necessary book—heart-wrenching and affirming all at once.' –Lee Smith, best-selling and award-winning author of Mrs. Darcy Meets the Blue-Eyed Stranger and The Last Girls

Thirty Days with My Father