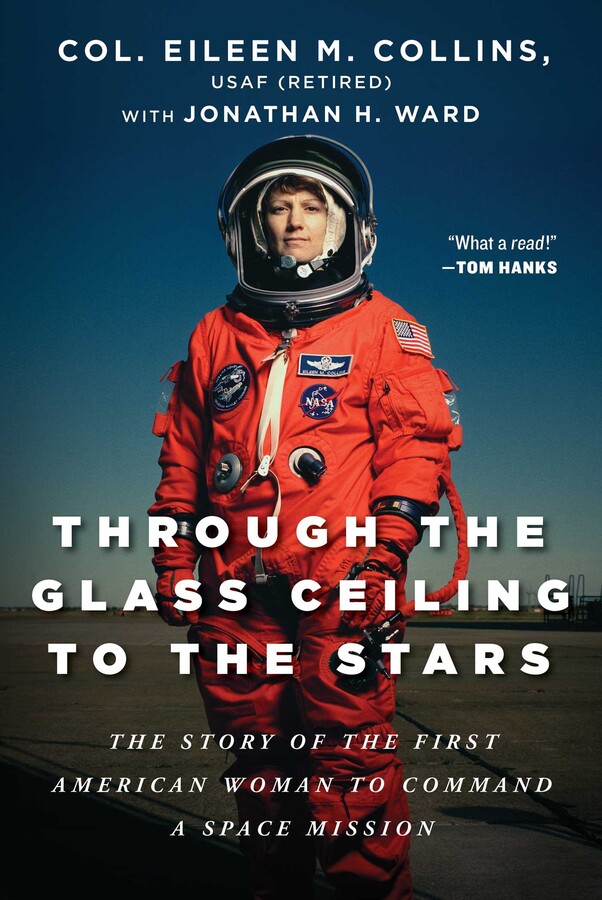 The long-awaited memoir of a trailblazer and role model who is telling her story for the first time.
Eileen Collins was an aviation pioneer her entire career, from her crowning achievements as the first woman to command an American space mission as well as the first to pilot the space shuttle to her early years as one of the Air Force’s first female pilots. She was in the first class of women to earn pilot’s wings at Vance Air Force Base and was their first female instructor pilot. She was only the second woman pilot admitted to the Air Force’s elite Test Pilot Program at Edwards Air Force Base. NASA had such confidence in her skills as a leader and pilot that she was entrusted to command the first shuttle mission after the Columbia disaster, returning the US to spaceflight after a two-year hiatus. Since retiring from the Air Force and NASA, she has served on numerous corporate boards and is an inspirational speaker about space exploration and leadership.

Eileen Collins is among the most recognized and admired women in the world, yet this is the first time she has told her story in a book. It is a story not only of achievement and overcoming obstacles but of profound personal transformation. The shy, quiet child of an alcoholic father and struggling single mother, who grew up in modest circumstances and was an unremarkable student, she had few prospects when she graduated from high school, but she changed her life to pursue her secret dream of becoming an astronaut. She shares her leadership and life lessons throughout the book with the aim of inspiring and passing on her legacy to a new generation.

Jonathan H. Ward works to bring the thrill of the space program to life for the general public as a Solar System Ambassador for the Jet Propulsion Laboratory and as a frequent speaker on space exploration topics to interest groups and at regional conferences. He is the author of two previous books on space exploration. He lives in Greensboro, North Carolina.

“Given the chance, I would long ponder trading places with Eileen Collins. Her book with Jonathan Ward is a grand collection of simple, yet sensational moments she experienced—in Outer Space!—and in much that led to her getting there. What a read!"—Tom Hanks

“I wrote the song ‘Beyond the Sky’ and sang it at Cape Canaveral for Eileen Collins’s maiden command voyage: ‘Once there was a girl with a dream in her heart, wild as the wind was her hope.’ This woman with the dream has turned into a serious heroine of the centuries who has taken her place among other men and women in the startling adventure of circling the Earth and leaving it behind. You will love her book: it is exciting, personal, detailed, a good thriller, suspenseful as a Stephen King mystery, and full of hope—that rare quality we all search for. Yeehaw, Commander Collins! What a life you have led and what a tale you have told! Brava!”—Judy Collins, singer, songwriter, author

"Eileen Collins is a living legend and an inspiration to young people all over the world. We both began our journeys in Elmira, NY, with dreams of doing something extraordinary. Nurturing a dream is rarely ever easy, and Eileen certainly didn’t have a clear path to pursuing hers. Despite being met with challenges at every step, she was tenacious in chasing her ambition of becoming an astronaut—one who would go on to make history as the first female pilot and commander of an American space shuttle. When you come across a story of such determination, it is a reminder that once you set your mind to something, even the sky is not the limit.”—Tommy Hilfiger

“I hope that a young explorer who reads Eileen’s book will be inspired to become the first human on Mars. Eileen proves that there is no limit to what we can do if we stay true to our goals and keep moving forward.”—Buzz Aldrin

“Eileen is living proof to youngsters and young ladies that you can do anything you want to do with your life.”—Wally Funk, Mercury 13 pilot

“Eileen Collins and I trained for the shuttle together, flew jets together, and waited together for that first chance to rocket into space. In Through the Glass Ceiling, Eileen tells the inspiring story of how she rose through hard work and determination to become a rare exemplar of the ‘right stuff,’ leading her crews to success in orbit and commanding the first shuttle launch after the Columbia disaster. Read, be amazed, then get this book into the hands of young explorers.”—Thomas D. Jones, astronaut and author of Skywalking

“Reading Eileen’s story will not only help you get to know this extraordinary woman (mother, wife, survivor, USAF colonel, mathematician, professor, astronaut), but I bet it will help you think about facing life’s challenges with a greater sense of strength and determination. She is an inspiration.”—Gwynne Shotwell, president and COO, SpaceX

“This book is endlessly inspiring!Eileen Collins is a trailblazer not only of space but of life. Her story of overcoming adversity to achieve her dream of flying in space will make your spirit soar.”—Andrew Chaikin, author of A Man on the Moon: The Voyages of the Apollo Astronauts

“In the dark days in the aftermath of the Columbia tragedy, we looked no further than Eileen Collins to lead us down the long road with the Return to Flight crew to help NASA and the nation believe in ourselves again and resume the human quest to explore. This new book, with the help of master storyteller Jonathan Ward, captures Eileen’s thoughtful reflections and compelling story, which serves to inspire us all to reach our greatest potential.” —Sean O’Keefe, NASA Administrator, 2001–2005

“As the commander of first space shuttle flight after the loss of Columbia, Eileen Collins lived, worked, and led her crew through a critical phase of history. How she got there is a story as interesting as the events themselves, one that is as inspirational as any in the pantheon of American aerospace heroes. This book takes you inside the life and times of one of NASA’s—America’s—best.”—Michael Griffin, NASA Administrator, 2005–2009

“Exciting, motivating, and inspirational are only a few words to describe this story of Eileen Collins and her incredible journey to space. Her tenacity, resilience and persistence come through with each chapter.”—Charlie Bolden, Major General, USMC, Retired, former astronaut, former NASA Administrator, 2009–2017

“Eileen Collins has finally written the book people have been asking for. Growing up on welfare in a fractured family, Eileen's chance to live her own life took form in her long-held love of airplanes; her deep love of flying comes across on every page. Despite numerous obstacles in her path, she turned setbacks into advantages. We're with her in the pilot’s seat from page one. This inspiring book takes you into the challenges, the risks, the rewards—the heart of what it took to be first.”—Francis French, space historian; former Director of Events, Sally Ride Science

"Eileen Collins is an unsung American hero. Her memoir should be ‘must reading’ for all young girls and boys in school, and indeed for every aspiring student at all levels. She has been a pioneer in everything she tried. The fact that NASA named Eileen as pilot on her first space shuttle flight tells you everything about the trust and confidence she inspires. I have had the honor of working with Eileen in her post-astronaut activities on several boards as well as the White House’s National Space Council. That same trust and confidence, combined with just being a natural leader who cares for people, are evident everywhere.”—General Lester L. Lyles, United States Air Force, retired, former Air Force Vice Chief of Staff, and Chairman NASA Advisory Council