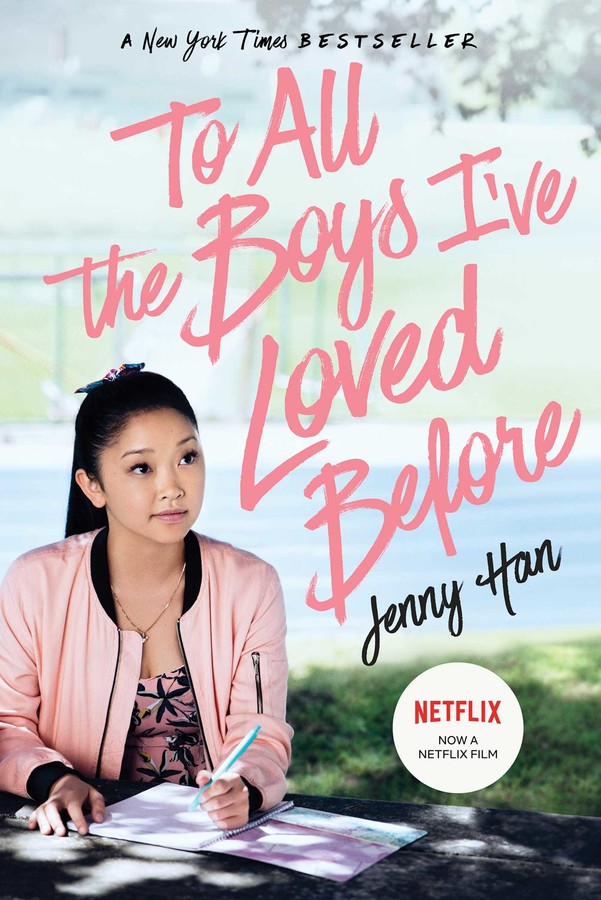 To All the Boys I've Loved Before

To All the Boys I’ve Loved Before is now a major motion picture streaming on Netflix!
A Time Best YA Book of All Time (2021)

What if all the crushes you ever had found out how you felt about them…all at once?

Sixteen-year-old Lara Jean Song keeps her love letters in a hatbox her mother gave her. They aren’t love letters that anyone else wrote for her; these are ones she’s written. One for every boy she’s ever loved—five in all. When she writes, she pours out her heart and soul and says all the things she would never say in real life, because her letters are for her eyes only. Until the day her secret letters are mailed, and suddenly, Lara Jean’s love life goes from imaginary to out of control.

Chapter 1 1
JOSH IS MARGOT’S BOYFRIEND, BUT I guess you could say my whole family is a little in love with him. It’s hard to say who most of all. Before he was Margot’s boyfriend, he was just Josh. He was always there. I say always, but I guess that’s not true. He moved next door five years ago but it feels like always.

My dad loves Josh because he’s a boy and my dad is surrounded by girls. I mean it: all day long he is surrounded by females. My dad is an ob-gyn, and he also happens to be the father of three daughters, so it’s like girls, girls, girls all day. He also likes Josh because Josh likes comics and he’ll go fishing with him. My dad tried to take us fishing once, and I cried when my shoes got mud on them, and Margot cried when her book got wet, and Kitty cried because Kitty was still practically a baby.

Kitty loves Josh because he’ll play cards with her and not get bored. Or at least pretend to not get bored. They make deals with each other—if I win this next hand, you have to make me a toasted crunchy-peanut-butter-sandwich, no crusts. That’s Kitty. Inevitably there won’t be crunchy peanut butter and Josh will say too bad, pick something else. But then Kitty will wear him down and he’ll run out and buy some, because that’s Josh.

If I had to say why Margot loves him, I think maybe I would say it’s because we all do.

We are in the living room, Kitty is pasting pictures of dogs to a giant piece of cardboard. There’s paper and scraps all around her. Humming to herself, she says, “When Daddy asks me what I want for Christmas, I am just going to say, ‘Pick any one of these breeds and we’ll be good.’?”

Margot and Josh are on the couch; I’m lying on the floor, watching TV. Josh popped a big bowl of popcorn, and I devote myself to it, handfuls and handfuls of it.

A commercial comes on for perfume: a girl is running around the streets of Paris in an orchid-colored halter dress that is thin as tissue paper. What I wouldn’t give to be that girl in that tissue-paper dress running around Paris in springtime! I sit up so suddenly I choke on a kernel of popcorn. Between coughs I say, “Margot, let’s meet in Paris for my spring break!” I’m already picturing myself twirling with a pistachio macaron in one hand and a raspberry one in the other.

Margot’s eyes light up. “Do you think Daddy will let you?”

“Sure, it’s culture. He’ll have to let me.” But it’s true that I’ve never flown by myself before. And also I’ve never even left the country before. Would Margot meet me at the airport, or would I have to find my own way to the hostel?

Josh must see the sudden worry on my face because he says, “Don’t worry. Your dad will definitely let you go if I’m with you.”

I brighten. “Yeah! We can stay at hostels and just eat pastries and cheese for all our meals.”

“We can go to Jim Morrison’s grave!” Josh throws in.

“We can go to a parfumerie and get our personal scents done!” I cheer, and Josh snorts.

“Um, I’m pretty sure ‘getting our scents done’ at a parfumerie would cost the same as a week’s stay at the hostel,” he says. He nudges Margot. “Your sister suffers from delusions of grandeur.”

“She is the fanciest of the three of us,” Margot agrees.

“What about me?” Kitty whimpers.

“You?” I scoff. “You’re the least fancy Song girl. I have to beg you to wash your feet at night, much less take a shower.”

Airily, I wave her off. “You’re too little to stay at a hostel.”

She crawls over to Margot and climbs in her lap, even though she’s nine and nine is too big to sit in people’s laps. “Margot, you’ll let me go, won’t you?”

“Maybe it could be a family vacation,” Margot says, kissing her cheek. “You and Lara Jean and Daddy could all come.”

I frown. That’s not at all the Paris trip I was imagining. Over Kitty’s head Josh mouths to me, We’ll talk later, and I give him a discreet thumbs-up.

It’s later that night; Josh is long gone. Kitty and our dad are asleep. We are in the kitchen. Margot is at the table on her computer; I am sitting next to her, rolling cookie dough into balls and dropping them in cinnamon and sugar. Snickerdoodles to get back in Kitty’s good graces. Earlier, when I went in to say good night, Kitty rolled over and wouldn’t speak to me because she’s still convinced I’m going to try to cut her out of the Paris trip. My plan is to put the snickerdoodles on a plate right next to her pillow so she wakes up to the smell of fresh-baked cookies.

Margot’s being extra quiet, and then, out of nowhere, she looks up from her computer and says, “I broke up with Josh tonight. After dinner.”

My cookie-dough ball falls out of my fingers and into the sugar bowl.

“I mean, it was time,” she says. Her eyes aren’t red-rimmed; she hasn’t been crying, I don’t think. Her voice is calm and even. Anyone looking at her would think she was fine. Because Margot is always fine, even when she’s not.

“I don’t see why you had to break up,” I say. “Just ’cause you’re going to college doesn’t mean you have to break up.”

“Lara Jean, I’m going to Scotland, not UVA. Saint Andrews is nearly four thousand miles away.” She pushes up her glasses. “What would be the point?”

I can’t even believe she would say that. “The point is, it’s Josh. Josh who loves you more than any boy has ever loved a girl!”

Margot rolls her eyes at this. She thinks I’m being dramatic, but I’m not. It’s true—that’s how much Josh loves Margot. He would never so much as look at another girl.

Suddenly she says, “Do you know what Mommy told me once?”

“What?” For a moment I forget all about Josh. Because no matter what I am doing in life, if Margot and I are in the middle of an argument, if I am about to get hit by a car, I will always stop and listen to a story about Mommy. Any detail, any remembrance that Margot has, I want to have it too. I’m better off than Kitty, though. Kitty doesn’t have one memory of Mommy that we haven’t given her. We’ve told her so many stories so many times that they’re hers now. “Remember that time…,” she’ll say. And then she’ll tell the story like she was there and not just a little baby.

“She told me to try not to go to college with a boyfriend. She said she didn’t want me to be the girl crying on the phone with her boyfriend and saying no to things instead of yes.”

Scotland is Margot’s yes, I guess. Absently, I scoop up a mound of cookie dough and pop it in my mouth.

I ignore her. “Josh would never hold you back from anything. He’s not like that. Remember how when you decided to run for student-body president, he was your campaign manager? He’s your biggest fan!”

At this, the corners of Margot’s mouth turn down, and I get up and fling my arms around her neck. She leans her head back and smiles up at me. “I’m okay,” she says, but she isn’t, I know she isn’t.

“It’s not too late, you know. You can go over there right now and tell him you changed your mind.”

Margot shakes her head. “It’s done, Lara Jean.” I release her and she closes her laptop. “When will the first batch be ready? I’m hungry.”

I look at the magnetic egg timer on the fridge. “Four more minutes.” I sit back down and say, “I don’t care what you say, Margot. You guys aren’t done. You love him too much.”

She shakes her head. “Lara Jean,” she begins, in her patient Margot voice, like I am a child and she is a wise old woman of forty-two.

I wave a spoonful of cookie dough under Margot’s nose, and she hesitates and then opens her mouth. I feed it to her like a baby. “Wait and see, you and Josh will be back together in a day, maybe two.” But even as I’m saying it, I know it’s not true. Margot’s not the kind of girl to break up and get back together on a whim; once she’s decided something, that’s it. There’s no waffling, no regrets. It’s like she said: when she’s done, she’s just done.

I wish (and this is a thought I’ve had many, many times, too many times to count) I was more like Margot. Because sometimes it feels like I’ll never be done.

Later, after I’ve washed the dishes and plated the cookies and set them on Kitty’s pillow, I go to my room. I don’t turn the light on. I go to my window. Josh’s light is still on. 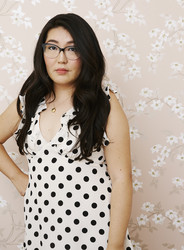 Jenny Han is the #1 New York Times bestselling author of the To All the Boys I’ve Loved Before series, now Netflix movies. She is also the author of The Summer I Turned Pretty series, Shug, and Clara Lee and the Apple Pie Dream. She is the coauthor of the Burn for Burn trilogy, with Siobhan Vivian. Her books have been published in more than thirty languages. A former librarian, Jenny earned her MFA in creative writing at the New School. She lives in Brooklyn, New York.

To All the Boys I've Loved Before

More books in this series: To All the Boys I've Loved Before