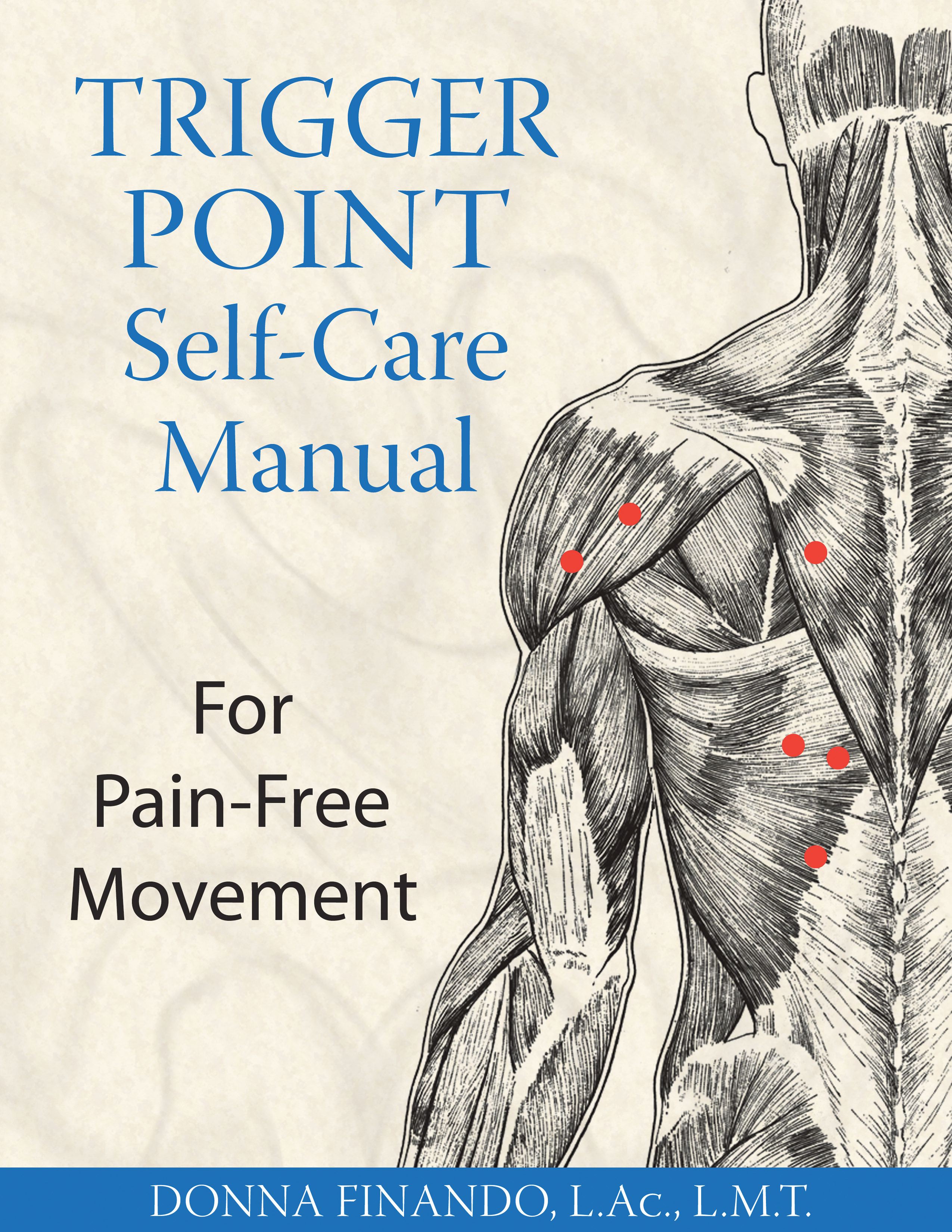 The vast majority of physical injuries incurred by active people begin with muscular injuries that are not addressed by the conventional medical approach to orthopedic care. Injuries of this type are generally too minor to warrant splinting, casting, or medication and often do not prevent participation in physical activities. They do, however, produce noticeable discomfort and, over time, frequently lead to more severe injuries.

In Trigger Point Self-Care Manual Donna Finando presents methods for the healing and prevention of musculature injuries. She identifies the causes of and remedies for areas of muscular tightness and restriction and details many self-care techniques, including precise self-massage, stretching, and the use of wet heat and/or ice. In the fully illustrated reference section, organized by body part, she identifies the pain associated with trigger points in each muscle of the body and provides instructions for palpating, treating, and stretching the muscle in order to release it.

Neck and Upper Back Pain

The human body is an astounding structure, and the neck is a mighty example of that truth. The complex design of muscle and bone makes the neck capable of intricate movements and gives it the strength to support the approximately eight-pound weight of the human head. For all of its intricacy--or perhaps because of that--the neck is subject to muscular stresses that often lead to pain and dysfunction.

The sources of neck pain in the musculature are quite numerous: overload, overwork, trauma, compromising postures, and emotional stresses are just some of the situations that lead to trigger point development. Many dancers and athletes ”stretch” their necks improperly, overstretching or straining the muscles in the process. Neck rolls, for example, place undue stress on the smaller muscles of the neck, requiring these muscles to support the weight of the head at certain points during the roll, which causes them to become overloaded. Trigger points may result as a function of this overload.

Equally problematic is the head-forward posture: chin jutting out, the muscles in the back of the neck shortening. This is a common posture for bicyclists when they’re riding; it’s a familiar posture for football players and tennis players as well. A round-shouldered upper-body posture will also result in a head-forward position. This posture can easily lead to overload injury to the neck muscles.

Whiplash-type injuries, the sudden forward and then backward motion experienced during a tackle or fall or a sideways impact, are common sources of neck injury. Football players, or any athlete who is at risk of a fall or impact, might experience trauma to the muscles of the neck.

Keeping the head and neck in the same position for a sustained period of time, such as when you’re painting a ceiling or the inside of a cabinet, can lead to restriction and associated trigger points. Working at a computer station at which your monitor is off to one side can encourage trigger point development for the prolonged neck rotation such a set-up requires. One of the most common sources of neck injury is improper breathing. Breathing high into the chest rather than into the lower belly causes the muscles of the neck to become involved in breathing, leading to a state of chronic overuse. Stress, of course, does the same thing--so much tension can become locked in the neck, throat, upper chest, and shoulders. Stress alone is a primary source of trigger point development in muscles affecting the neck and upper back.

If you are suffering with neck pain, consider the sources of your pain. Is the pain a result of your physical activities? your posture? the life stresses you embody? an inefficient breathing pattern? The pain may come from more than one source. You will have to address them all in order to find true resolution and make your neck pain free.

Of all the muscles in the body, trapezius is the one that most frequently develops trigger points. Trapezius attaches to the base of the skull and lies at the back of the neck, the upper shoulders, and over the upper and middle back. Trapezius is actually comprised of three different groups of fibers: an upper group, a middle group, and a lower group. The muscle fibers of upper trapezius drape across the upper shoulders to attach to the collarbone (the clavicle) on the upper chest. The upper trapezius forms the characteristic shape of the upper shoulder area that is closest to the neck. This muscle is the only muscle in the body that raises the tip of the shoulders, producing the ”shrug.“ The upper trapezius also moves the head and neck toward the shoulder on the same side.

Trigger points can develop in many different areas of the trapezius, causing pain in various places in the neck and upper back. Trigger points commonly develop as a result of overload, compression, and trauma. Stress is often the greatest source of overload. If you think about your posture when you’re stressed you will see that your shoulders often bear the biggest burden. It’s not for nothing that we speak of carrying the weight of the world on our shoulders. When we do “carry the world” this way, it’s the trapezius that is affected. Overload also occurs as a function of continually raising your shoulder to your ear, as you might do to hold a phone between the two.

Trapezius is the muscle that supports the weight of your arms. When you are seated on a chair without arm support, the trapezius works continually to support your weight. The dancer practicing overhead lifts, the weight lifter doing military presses, and the cyclist bent over her handlebars are all in danger of developing trapezius trigger points due to overload of the muscle.

Compressing the trapezius also leads to trigger points: hikers whose backpacks are ill-fitted or those who carry heavy gear on their shoulders may risk developing trigger points from compression. Trauma in the form of whiplash frequently produces trigger points. (Whiplash is the forceful, unexpected, and uncontrolled forward-then-backward motion of the head.) Auto accidents are a well-known cause of whiplash injuries. So are falls, something that every athlete is at risk for.

Donna Finando, L.Ac., L.M.T., is a practitioner of acupuncture and massage, specializing in myofascial meridian therapy and myofascial release techniques for the treatment of chronic and acute pain and dysfunction. She studied extensively with Janet Travell, M.D., a pioneer in the field of pain management. She lives on Long Island, New York, where she has been in continual practice since 1976. She is coauthor of Trigger Point Therapy for Myofascial Pain and the author of Trigger Point Self-Care Manual and Acupoint and Trigger Point Therapy for Babies and Children.

"Acupuncture and massage practitioner Donna Finando, who specializes in myofascial techniques and has studied pain management with field pioneer Janet Travell, M.D., presents Trigger Point Self-Care Manual For Pain-Free Movement, a guide to self-care practices for promoting a healthier and happier life. Chapters examine the human body muscle by muscle, describing the different aches and pains that can result from stress or injury in each muscle, and teach readers about the "trigger points" in muscles that are particularly susceptible to damage and use pain as a warning sign to prevent even more serious injury. Exercises, stretches, and solid medical advice for taking good care of one's muscles fill this handy guide, written especially for lay readers and illustrated with black-and-white diagrams and red highlights. While the Trigger Point Self-Care Manual cannot replace a doctor's supervision, it is a valuable tool for personal health and maintenance and highly recommended, especially for people leading active lifestyles or those susceptible to muscular stiffness and soreness."

"Any who suffer from muscle pain will find her methods specific and useful, based on her acupuncture and massage background and studies with Janet Travell, MD, a pioneer in pain management."

"With an index of symptoms and easy to follow diagrams and illustrations, Finando provides the opportunity to gain control over your pain through the self-application of trigger point therapy."

"With an index of symptoms and easy to follow diagrams and illustrations, Finando offers you the opportunity to gain control over your pain through trigger point therapy."