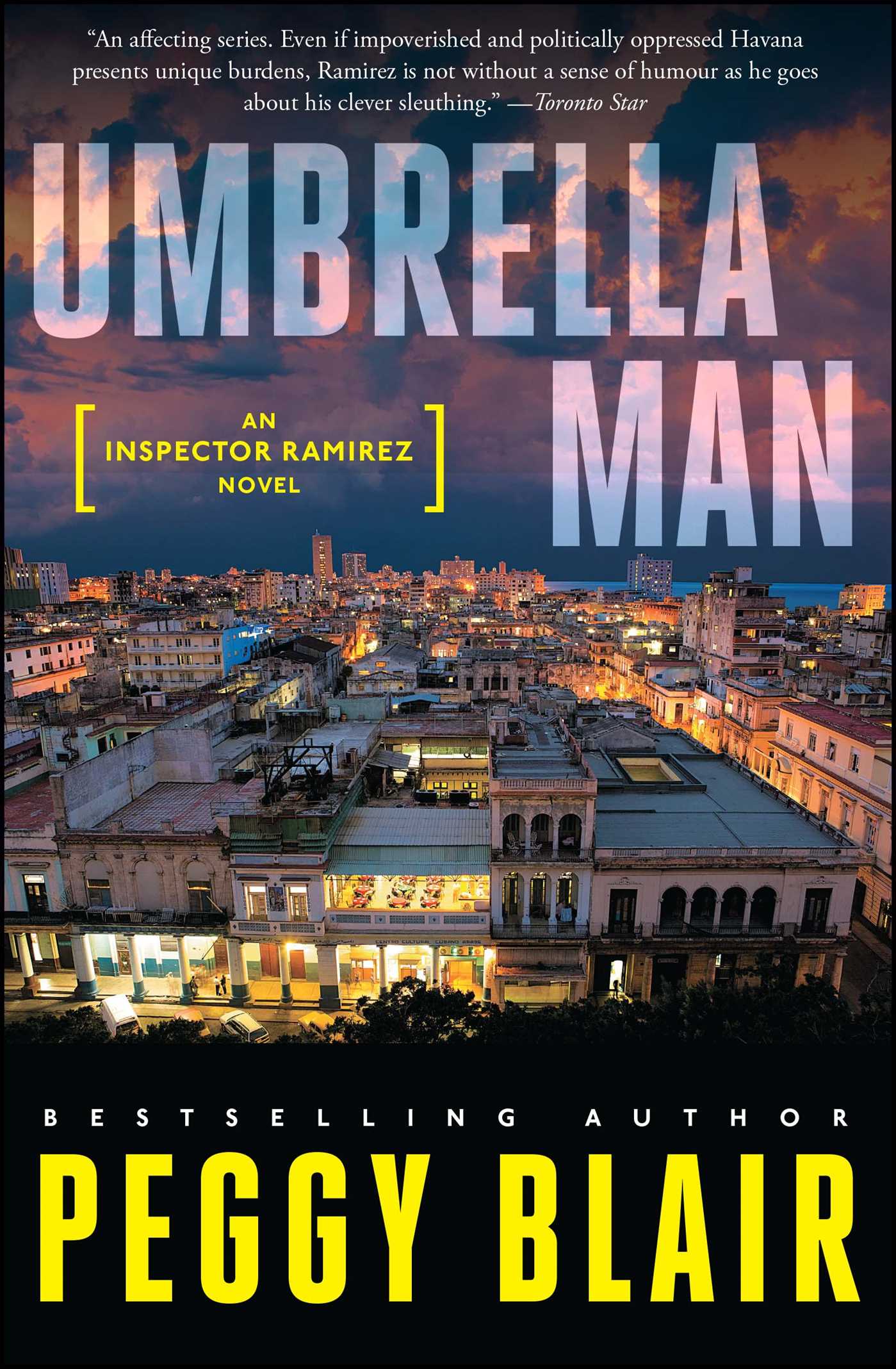 By Peggy Blair
LIST PRICE $11.99
PRICE MAY VARY BY RETAILER

When Mama Loa, a witch doctor, tells Inspector Ramirez that people in the sky are going to die, he thinks she’s crazy. After all, there hasn’t been a violent death in Havana in months.

But things quickly change when a Russian is murdered, execution-style, on the Malecón and three flight crew members die in suspicious circumstances. When Russian intelligence officer Slava Kadun arrives in Havana warning that a CIA hitman has plans to assassinate Raúl Castro, Ramirez starts to wonder if the deaths are connected. With the political future of Cuba at stake, he has only hours to stop a cold-blooded killer.

An old black woman sat on the curb beside Ramirez’s small blue car. She lifted her head as he approached, fixing her dark eyes on his. He couldn’t tell from her expression if she was sad or angry.

Inspector Ricardo Ramirez eased himself onto the curb beside her. “Your grandmother,” Mama Loa said, in her soft Creole accent, “she come to see me last night. She say the gods don’t like that you gave back your gift.”

Although Ramirez’s long-deceased slave grandmother was Yoruba, and Mama Loa was Vodun, both adhered to Santería, a mix of Catholicism and African animism. They both believed the dead were everywhere, and that they visited their dreams.

“Have you found a new home yet?” Ramirez asked the old woman uneasily, changing the subject. The last time he’d seen Mama Loa, he had given her a thick braid of gold chain, one of the many seized items that never quite found their way into the police exhibit room. The chain was valuable enough on the black market to pay for at least a few months’ accommodation for the old woman and her strays.

“Not yet,” Mama Loa said, shaking her head. Her long grey dreadlocks bounced on her shoulders. “The government still looking for a place for us, I guess. I got a new goddaughter waiting to move in with me. But Nevara say she don’t want to wait no more. She say some Russian’s going to pay her to go to work for him instead.”

Her goddaughters, Mama Loa called them. Prostitutes. Jineteras who had no safe place to live when they wanted to get off the streets. They found a sort of refuge with her, or at least they had, until the apartment building she’d lived in was declared too dangerous for habitation, which in Havana was saying something.

A bureaucratically displaced person like Mama Loa had few options. She’d ended up living in a shack made from scavenged wood in a shanty town on the outskirts of the city. The Isle of Dust, locals called it. That’s about all that was left of their hopes once they landed there, thought Ramirez—ashes and dust.

“Believe me, I appreciate everything you done for us.” Mama Loa glanced at him sideways. The whites of her eyes were bright against her ebony skin. “I know you think I’m crazy. But I always speak the truth.”

Ramirez tried not to smile at her unabashed honesty. “I’ve never doubted that for a moment, Mama Loa.”

“It’s not your fault you don’t know the way. Your grandmother, she say she warned you to never make the gods angry.”

“I’m sorry to hear you had such frightening dreams.” Ramirez shifted from one foot to the other. How could she possibly know about his grandmother’s warning, or what he’d done to rid himself of his visions? Had Mama Loa followed him to the beach that afternoon in March, watched him scrape a shallow hole in the hot sand?

He’d burned heaven money he’d purchased at a Chinatown kiosk—paper bills in ridiculously high denominations. The vendor had laughed and called it hell money. The irony hadn’t escaped him—that he’d found himself pleading with ancient gods to convince ghosts he wasn’t sure existed either, to leave him alone so his life could return to normal. But afterwards, the spirits that haunted him had vanished. Had they ever been real?

Ramirez’s beloved grandmother had died when he was ten. On her deathbed, she’d warned that he would see ghosts, his gift as the eldest son. But his mother quickly disavowed him of that notion: his grandmother had been sick. She had dementia; she didn’t always know what she was saying.

Eventually, as time passed without him seeing any ghosts, young Ricky reluctantly came to accept that his grandmother had made it up. After all, she’d also told him fanciful stories of lost pirate ships and giant squid, of huge octopuses that waged deadly underwater battles by gripping poisonous blue jellyfish in their tentacles as weapons.

But then he joined the Cuban National Revolutionary Police, or PNR, and, as soon as he was promoted to homicides, the murder victims of his unsolved files began to haunt him. He’d begged the gods to take them away, that hot day in March, and now the ghosts were gone. Ramirez had since managed to persuade himself that the apparitions were simply hallucinations, products of stress, too much work, too little sleep.

As for how the ghosts so often knew things that Ramirez himself didn’t know, his friend Hector Apiro once described how the human brain could retain information without being aware of it. “A German suffers a head injury one night and wakes up speaking Welsh,” Apiro had chortled, bobbing his large head, “a language he claims he’s never heard before, and an excruciatingly difficult one at that. And yet he must have encountered it somewhere, because suddenly he’s fluent. The brain is a complex repository, Ricardo—the biggest library in the world.”

That’s all the ghosts were, Ramirez decided. Buried memories. Subconscious tricks. People he’d encountered somewhere and forgotten. Nothing to do with an absurd, superstitious prayer to the orishas on a stifling hot day or a dying woman’s vivid imagination.

Suddenly embarrassed, he glanced at his watch and stood up. The light fabric of his pants clung to his legs. He tried to straighten the creases.

“You’ll have to excuse me, Mama Loa. My wife and I have plans to go to a movie this afternoon. She’ll be annoyed if I’m late. And trust me, even the gods don’t want to see Francesca angry.” He smiled, but Mama Loa’s face remained stern.

“I know you don’t believe me yet,” she said, “but you will.” She pointed a long, nicotine-stained finger towards the heavens. A jetliner was passing high overhead; it left a brushstroke of white against the intense blue sky. “The sky gods aren’t happy with you. Those people up there who fly in the clouds? Some of them are going to die.” 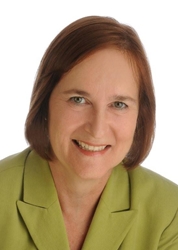 Peggy Blair was a lawyer for more than thirty years. She is the author of the award-winning and critically acclaimed Inspector Ramirez mysteries The Beggar’s Opera, The Poisoned Pawn, and Hungry Ghosts. She lives in Ottawa.

“As a longtime lawyer who spent a large portion of her career in Aboriginal law, Blair is well aware of what she’s doing here, and handles the circumstances deftly. […] The seriousness of the crimes and Blair’s critical eye for the failings of the legal institutions of two very different countries add a somber tone to this exciting procedural.”

“…heavy on atmosphere and style, the two places Blair shines”

“Hungry Ghosts is one of the best mysteries to come out of Ottawa this or any year.”

“Peggy Blair writes like an author possessed, with story-telling skills that make her a must-read writer beyond the mystery genre.”

“Blair’s prose is evocative, nary a word amiss.”

“Hungry Ghosts is an irresistibly page-turning addition to a series that combines tension, mystery, and unexpected humour in the form of the clever Inspector Ramirez.”

“Part of the genius of this novel is Blair’s ongoing exploration of cultures with which the average Canadian reader is not necessarily familiar … Suffice to say, this is a book worth reading.”

“An affecting series. Even if impoverished and politically oppressed Havana presents unique burdens, Ramirez is not without a sense of humour as he goes about his clever sleuthing.”

"Intelligent and well researched, with a terrific sense of atmosphere and pace. Reminds me of Qiu Xiaolong's Inspector Chen, one of my favourite series. Recommended."

– Sam Wiebe, author of Last of the Independents

By Peggy Blair
LIST PRICE $11.99
PRICE MAY VARY BY RETAILER