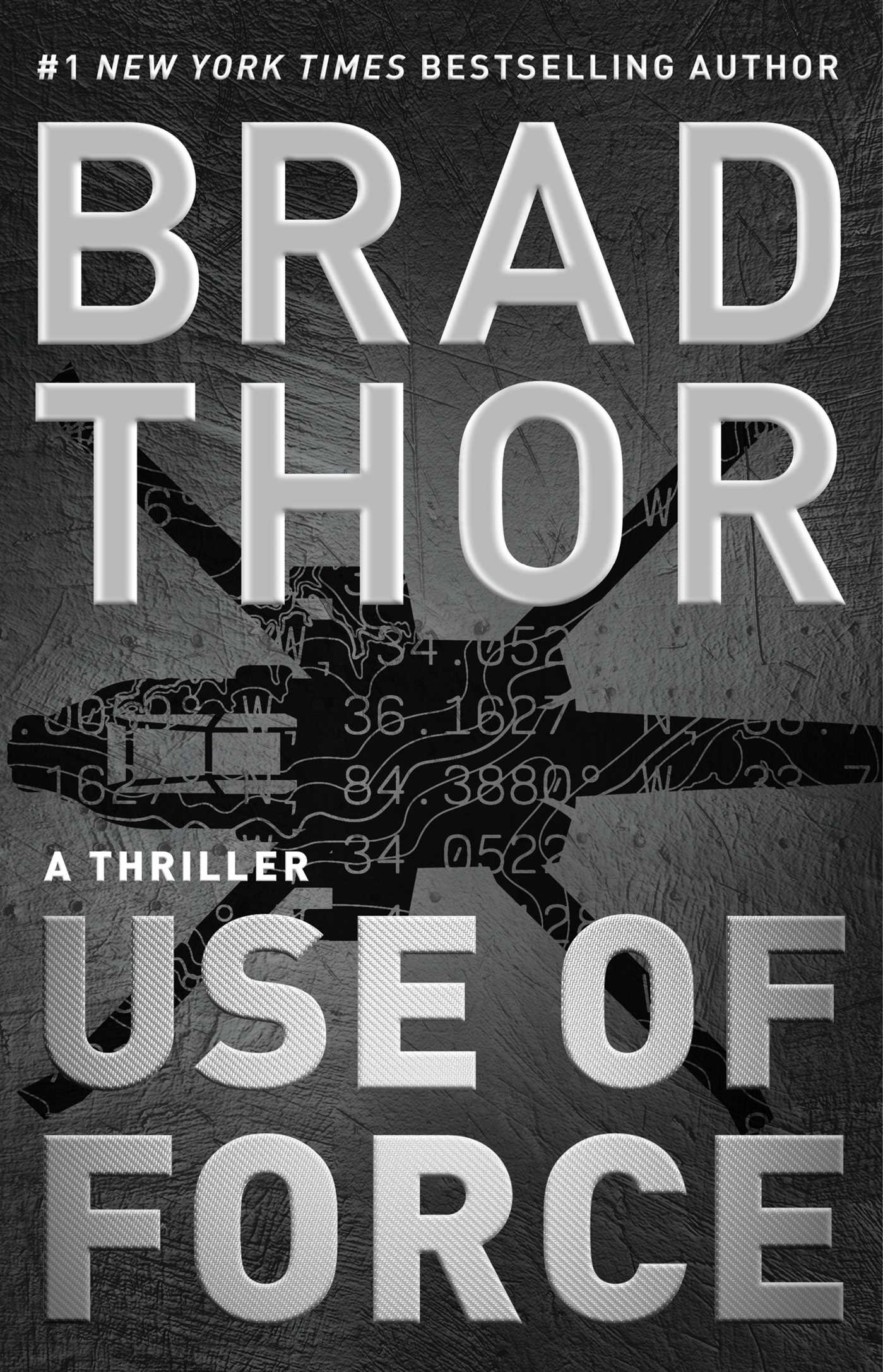 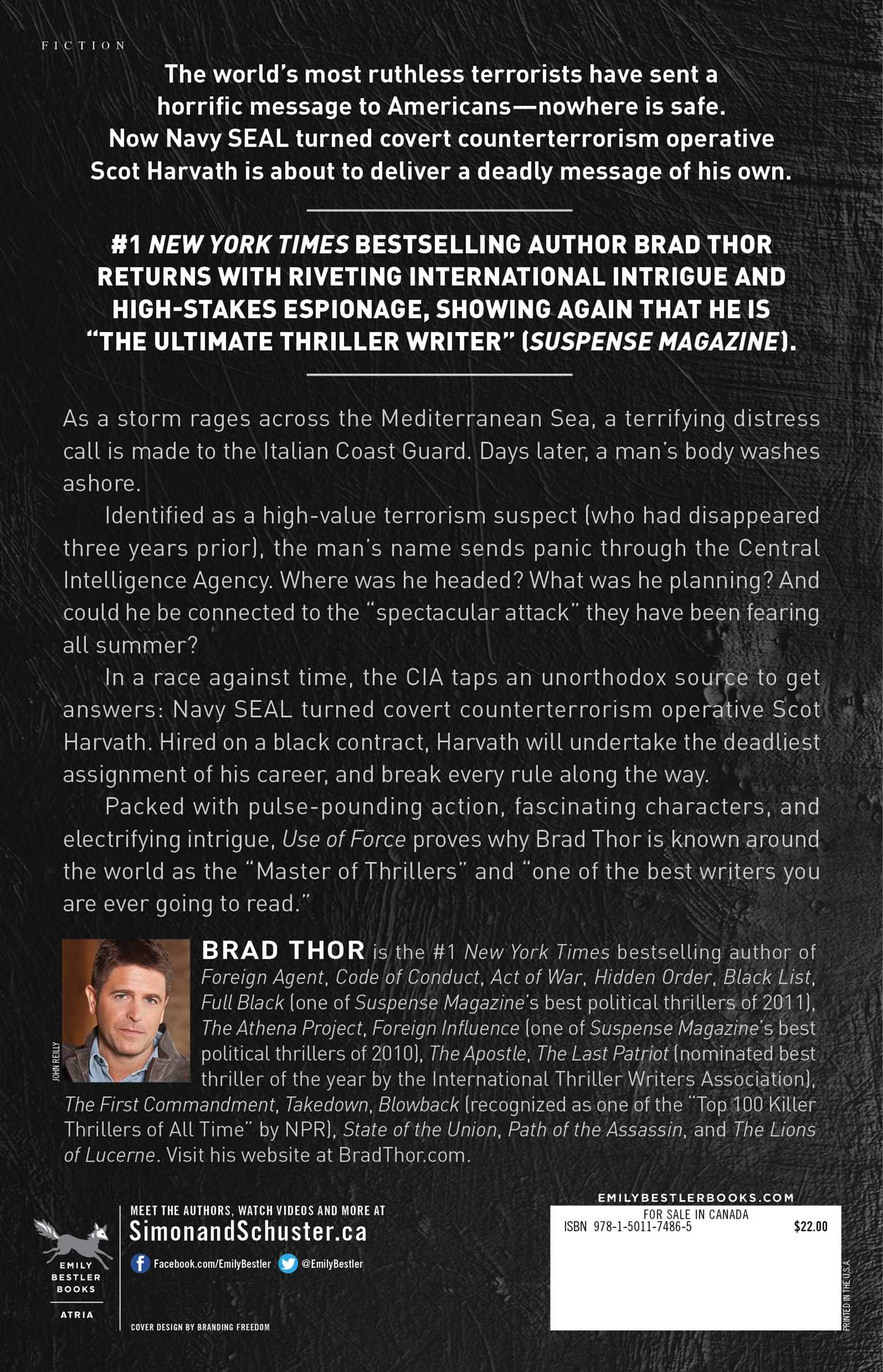 As a storm rages across the Mediterranean Sea, a terrifying distress call is made to the Italian Coast Guard. Days later, a body washes ashore.

Identified as a high value terrorism suspect (who had disappeared three years prior), his name sends panic through the Central Intelligence Agency.

Where was he headed? What was he planning? And could he be connected to the “spectacular attack” they have been fearing all summer?

In a race against time, the CIA taps an unorthodox source to get answers: Navy SEAL turned covert counterterrorism operative, Scot Harvath.

Hired on a black contract, Harvath will provide the deniability the United States needs, while he breaks every rule along the way.

Packed with pulse-pounding action, fascinating characters, and electrifying intrigue, Brad Thor does it again and proves why he is known around-the-world as the “Master of Thrillers.”

Scot Harvath wasn’t supposed to be here. The CIA was forbidden to conduct operations inside the United States—especially the kind he was about to undertake. Desperate times, though, called for desperate measures.

As fit as he was, he could have gotten away without wearing much of anything. That wasn’t his style, though. It also wouldn’t have made sense for his assignment.

Instead, the five-foot-ten-inch Harvath, with his sandy brown hair and his glacierlike blue eyes, wore a Continental Army coat and a full face of Cherokee war paint, obscuring his handsome features.

As the wind kicked up again, he pulled a pair of steampunk goggles over his eyes and wrapped a keffiyeh around his face. Clouds of the fine alkaline dust that covered the playa were swirling everywhere. Visibility was dropping.

“Fifty meters,” a disembodied voice said over the device pushed deep into his left ear. He kept walking, scanning from left to right.

Burning Man took place in a temporary “metropolis” built in the Black Rock Desert, which was called Black Rock City. With more than seventy thousand attendees, BRC was twice as dense as the City of London.

Seen from above, the festival was laid out in the shape of a giant letter C, or two-thirds of a circle. It looked like a blueprint for the Death Star with a good chunk blown away.

It was a mile and a half across, and a quarter mile out from the center of the C was the “Man”—a giant effigy that would be set on fire Saturday night.

There were no accommodations in Black Rock City, only what you hauled in (and hauled back out) yourself. “Burners,” as attendees were known, spent months in advance planning elaborately themed camps and villages. Only the ultrarich showed up on Day One, usually via helicopter, to luxury, turnkey camps that had already been constructed for them.

Almost as controversial as the camps of the ultrarich was something called Kidsville. It was one of the largest camps at Burning Man and was for families with children—an interesting choice at such an adult festival. Nevertheless, this year, there were about a thousand kids in attendance.

An army of volunteers, augmented by private security, had screened each vehicle as it entered the festival. Occasionally, the volunteers were assisted by undercover law enforcement.

The massive flow of traffic, in addition to the laid-back atmosphere of the event, made it impossible to do anything thorough. It was more security “theater” than anything else.

Local and state law enforcement patrolled the festival, as did Park Rangers from the Bureau of Land Management. But as long as you weren’t openly doing drugs or providing alcohol to minors, it wasn’t difficult to stay off their radar. They had their hands more than full. It was no wonder Burning Man had caught the attention of terrorists.

The voice spoke again in Harvath’s ear. “You should be able to see it now.”

He stopped walking, raised a bottle of water to his mouth, and used the opportunity to look around.

Banners and tent flaps blew in the wind. There was a makeshift bar called 7 Deadly Gins, something called Camp Woo Woo, another place called No Bikini Atoll, and an enclave named Toxic Disco Clam. Just beyond was the blue RV.

“I see it now,” said Harvath, tossing the water bottle.

“Hey!” a woman behind him complained, but he ignored her and kept moving. He had come too far to let Hamza Rahim escape.

Through the dust, the evening air was redolent with the smoke from bonfires and burn barrels. Music thumped from every direction. Hidden out of sight, diesel generators rumbled their low growls, powering turntables, sound systems, and massive light shows. Dancers on the playa spun flaming orbs on long chains. Rolling art exhibits, brightly lit from end to end, spat fire into the night sky.

He did a slow loop around the camp that contained the blue RV. Everyone seemed to be congregated in a large tent, content to party and wait out the dust storm happening outside.

After a group of bicycles covered in synchronized LED lights passed, Harvath approached the RV.

It was dark inside. He tried to peer through several windows, but the blinds were drawn. A sunshade covered the windshield.

Pressing his ear against the door, he listened. Nothing. If there was anyone inside, they were being very quiet.

He tried to open the door, but it was locked.

Removing a set of picks, he looked over his shoulder to make sure no one was watching. No one was. Within seconds he had the door unlocked, had affixed the suppressor to his Sig Sauer pistol, and had slipped inside.

Even through his keffiyeh, the RV smelled terrible—like stale cigarettes and a toilet that didn’t flush well. After he peeled off his goggles, it took a second for his eyes to adjust.

Plates of half-eaten food sat on the table. Dishes were stacked in the sink. A white plastic trash bag, overflowing with garbage, was tied to one of the drawer handles. The upholstery was torn, the carpeting was stained, and there was playa dust covering everything. Hamza Rahim lived like an animal.

Noticing something on the floor, Harvath bent over and picked it up. Pieces of electrical wire. His heart rate went up.

As far as anyone at the CIA knew, Rahim had been sent to Burning Man for preattack surveillance. His job was to gather intelligence and feed it back up the chain. Harvath’s assignment was to snatch Rahim and break his network by any means necessary. The wires, though, suggested the CIA’s intelligence might have been dangerously off target. Raising his pistol, Harvath crept toward the rear of the vehicle.

The first thing he checked was a small closet. It was filled with junk. Across from it was a set of bunk beds—both of which had been slept in. Bad sign. Rahim was supposed to be alone.

Beyond the bunk beds was the master area. That bed had also been slept in.

There was only one place left to search: the bathroom.

The door to it was shut. Taking up a position to the side, Harvath slowly tried the knob. Locked.

He listened for any sound, but all he could hear was the thump of the dance music pulsing outside.

Stepping in front of the door, he raised his boot and kicked straight through the knob, shattering the lockset and leaving a hole where it used to be.

As the hinges were on the outside, the door was meant to swing away from the bathroom into the RV.

Harvath took one hand off his pistol and reached for the door. That was when it exploded.