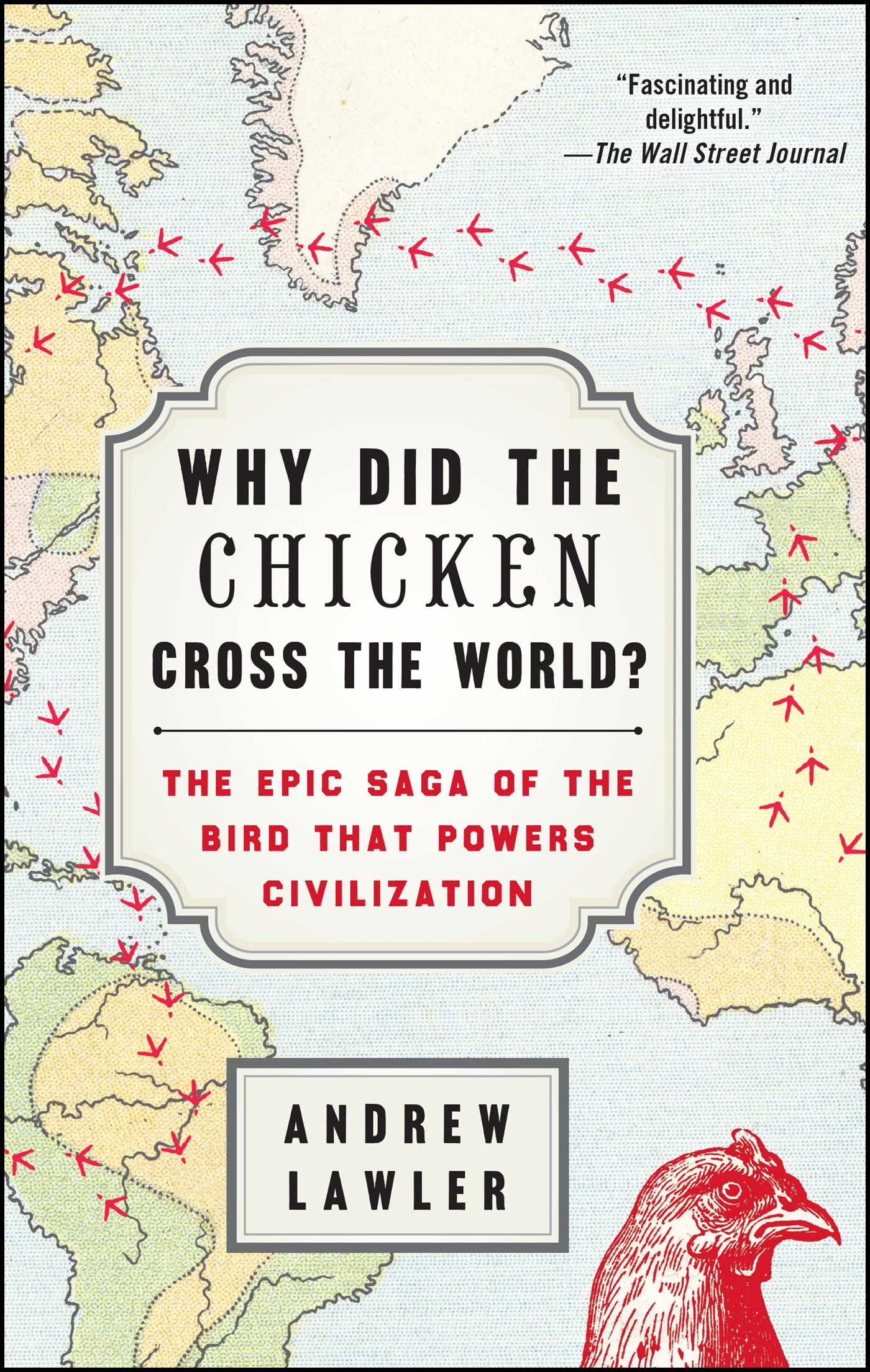 By Andrew Lawler
LIST PRICE $16.99
PRICE MAY VARY BY RETAILER

Veteran journalist Andrew Lawler delivers a “fascinating and delightful…globetrotting tour” (Wall Street Journal) with the animal that has been most crucial to the spread of civilization—the chicken.

In a masterful combination of historical sleuthing and journalistic adventure, veteran reporter Andrew Lawler “opens a window on civilization, evolution, capitalism, and ethics” (New York) with a fascinating account of the most successful of all cross-species relationships—the partnership between human and chicken. This “splendid book full of obsessive travel and research in history” (Kirkus Reviews) explores how people through the ages embraced the chicken as a messenger of the gods, an all-purpose medicine, an emblem of resurrection, a powerful sex symbol, a gambling aid, a handy research tool, an inspiration for bravery, the epitome of evil, and, of course, the star of the world’s most famous joke.

Queen Victoria was obsessed with the chicken. Socrates’s last words embraced it. Charles Darwin and Louis Pasteur used it for scientific breakthroughs. Religious leaders of all stripes have praised it. Now neuroscientists are uncovering signs of a deep intelligence that offers insights into human behavior.

Trekking from the jungles of southeast Asia through the Middle East and beyond, Lawler discovers the secrets behind the fowl’s transformation from a shy, wild bird into an animal of astonishing versatility, capable of serving our species’ changing needs more than the horse, cow, or dog. The natural history of the chicken, and its role in entertainment, food history, and food politics, as well as the debate raging over animal welfare, comes to light in this “witty, conversational” (Booklist) volume. 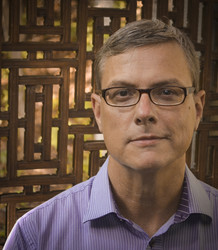 Andrew Lawler is the author of more than a thousand newspaper and magazine articles on subjects ranging from asteroids to zebrafish. He is a contributing writer for Science magazine and a contributing editor for Archaeology magazine. He has written for National Geographic, Smithsonian, Discover, Slate, Columbia Journalism Review, The New York Times, and several European newspapers, among others. See more at AndrewLawler.com.

“Andrew Lawler takes us on a fascinating journey through the history of a fundamental source of human protein. This is an appealing, beautifully written exploration of an important, but hitherto neglected, major player in our history. I’ll never think about chickens the same way again.”

“Prize-winning journalist Andrew Lawler takes on the world in this elegant and engaging paean to poultry. Part travelog, part scientific history, all rollicking good fun, this marvelous journalistic exploration scours six continents to bring us a deep appreciation and understanding of our uneasy relationship with one of nature's most fascinating creatures—from sex symbol to religious icon to ‘24-hour two-legged drugstore.’ This book challenges not only everything we thought we knew about this most beleaguered bird, but of nature itself. Astonishing.”

“Why Did the Chicken Cross the Road? is an eye-opening journey that restores the chicken to its proper place in human history. You’ll be surprised by how much you didn’t know.”

– David Grimm, author of Citizen Canine: Our Evolving Relationship with Cats and Dogs

"This fast-paced and well-written book reads like a detective story. Who would have guessed that the humble chicken’s exotic past would make such a fascinating tale full of high-stakes intrigue? If you want to be educated and entertained--move this book to the top of your reading list."

“Surprising and delightful. This engaging and provocative book tracks the chicken's transformation from gorgeous red jungle fowl to today's highly engineered animal.. A fascinating read that adds to the mounting pile of evidence that animals, even chickens, are capable of much more than we usually think."

– Virginia Morell, author of Animal Wise: How We Know Animals Think and Feel

"The planet's most populous and edible bird really does open a window on civilization, evolution, capitalism, and ethics. (Reading about it is lots of fun, too.)"

"Lawler is an entertaining guide with an easy touch, whimsical but never random."

"Rip-roaring, erudite... His perspective gives fresh insight into the problems created by the ubiquity of chickens -- as well as possible solutions."

"An encyclopedic examination of the chicken's ever-grorwing and complex role in societies and civilization... Readers are sure to come away with a deeper understanding of--and greater appreciation for--an animal that's considered commonplace."

"[An] absorbing survey of one of our most important cross-species relationships... witty, conversational."

“A whole flock of fun. Lawler mixes science and history…. That makes for a well-rounded, informative, and highly enjoyable book... A book you’ll crow about.”

"How Cockfighting Changed History: Why Did the Chicken Cross the World? suggests that the vicious sport 'may be responsible for creating the bird that today is the world’s single most important source of protein.'”

"Fascinating and delightful... Mr. Lawler’s globe-trotting tour shows that the bird has played a remarkable role in human history—and will almost certainly continue to do so. Right out of the chute, Mr. Lawler impresses us with the bird’s ubiquity... Readers will laugh—and want to buy Mr. Lawler a drink... What unfolds from this exhaustive reporting is a story not just large in scope but surprising in its details."

"An examination of the lowly chicken reveals a bird with a grand past – and a grim present. It’s time to give the 20 billion chickens on our beleaguered planet a little more respect and a lot more love... The chicken has accompanied us on each stage of our journey from primitivism to modernism...Lawler is convincing when he concludes that we are more like the chicken than we might admit,'gentle and violent, calm and agitated, graceful and awkward, aspiring to fly but still bound to earth.'”

"How this humble bird saved humanity -- No bird is a match for the chicken... Lawler chronicles how a wild bird from Southeast Asia ended up being mass-produced by the billions and raised in every country, he writes, except one."

"Before the middle of the 20th century, America’s chickens were a varied and hearty lot. The midcentury Chicken of Tomorrow project changed all that...just as the Manhattan Project brought together scientists, engineers, and government administrators to unlock the secret of the atom, the Chicken of Tomorrow project drew on thousands of poultry researchers, farmers, and agriculture extension agents to fashion a new high-tech device—the Cornish Cross breed of chicken we have today—built to live fast, die young."

"Is this the golden age of food history? ...Make room for Andrew Lawler’s paean to that most munched-on fowl of them all, the chicken. Lawler brings an omnivorous curiosity to a creature that gets too little respect given its long service to mankind."

"In exacting historical and scientific detail, Lawler reveals how the reliable crow of the cock, along with his mate’s prodigious egg-laying abilities, allowed chickens to become 'the world’s most ubiquitous bird.'”

"Andrew Lawler’s Why Did the Chicken Cross the World…[details] one surprising fact after another that ultimately reveal a grand truth: that chickens are everywhere and are inextricably linked to the emergence and maintenance of human civilization.… Lawler’s book goes a long way toward restoring chickens to their respected position within human history and our modern world. Both chickens and people will benefit as a result."

“Lawler chronicles the impossible journey of the chicken through history. From its roots as a secretive jungle fowl in the wilderness of Southeast Asia millennia ago, the bird has spread across all nations and cultures. But now agricultural science has turned the chicken into a mass-produced factory animal, bred and housed in horrendous assembly-line conditions to provide protein to millions of people. Endlessly fascinating, endlessly heartbreaking.”

By Andrew Lawler
LIST PRICE $16.99
PRICE MAY VARY BY RETAILER