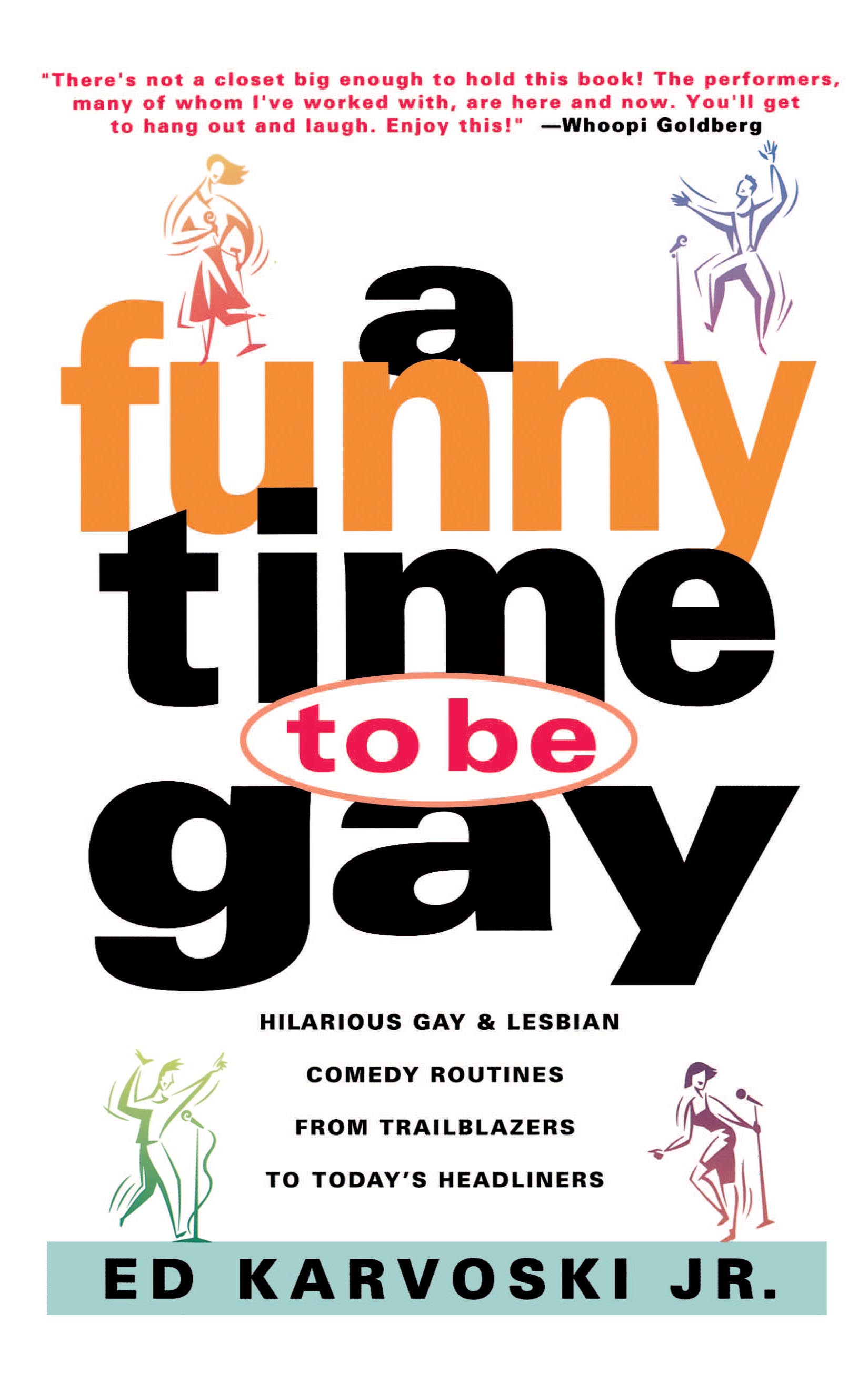 A Funny Time to Be Gay

In A Funny Time to Be Gay, Ed Karvoski Jr. traces the evolution of gay and lesbian comedy from the few pioneers in New York’s Greenwich Village in the seventies, to the mavericks who played San Francisco’s famed Valencia Rose in the eighties, to the comics who starred in their own TV specials in the nineties and continue to headline comedy clubs.

Among the more than 30 humorists spotlighted…

· KATE CLINTON - three-time author including Don’t Get Me Started

“To the next generation of showbiz hopefuls who are gay or lesbian and choose not to hide it: make a grand entrance onto the comedy-club stages and television and film studios.  The closet door has been set ajar.  As any of these openly gay and lesbians comics will tell you, ‘A funny thing happened on the way out of the closet!’”
-- Ed Karvoski Jr., from author’s introduction

“There’s not a closet big enough to hold this book! The performers, many of whom I’ve worked with, are here and now. You’ll get to hang out and laugh. Enjoy this!”-- Whoopi Goldberg

“The sex may be safe, but the comedy isn’t. This is the kind of funny, bias-bashing book that all of America – gay and straight – should be reading.”--Bill Maher, host of HBO’s Real Time with Bill Maher

“You think Ellen DeGeneres had it tough, hiding her homosexuality in the closet all those years until after she hit the big time in television? What about comics long out of the closet who have struggled in relative obscurity in large part because they are openly gay?... Many of their routines are available to a wider audience through a new compilation, A Funny Time to Be Gay, collected by Ed Karvoski Jr.”--Tom Kuntz, THE NEW YORK TIMES

“According to publishers and retailers, this is indeed ‘a funny to be gay’… A Funny Time to Be Gay is among the strong, consistent sellers.”-- James A. Martin, PUBLISHERS WEEKLY

“… a great reference guide to gay and lesbian comics working today, giving you a good sense and a better idea of whose act you’ll want to catch at a venue near you. … This guy [Karvoski] is good at what he does… So come on – put your hands together and give a warm welcome to the past, present and future of queer comedy.”-- Julia Willis, LAMBDA BOOK REPORT

“Karvoski manages to cull works that pack an equal punch on the page. Each interview and excerpt seems like a private conversation with the comic, which reflects Karvoski’s own fascination with the topic. … A Funny Time to Be Gay anecdotally includes some of the history of gay and lesbian comedy over three decades, filtered through Karvoski’s own funny perspective.”-- Meryl Cohn, FRONTIERS NEWSMAGAZINE (Los Angeles)

"After reading A Funny Time to Be Gay, I passed from being entertained to being inspired."  – Brett Butler, comedienne and author of Knee Deep in Paradise

"A Funny Time to Be Gay is as funny as it is fun to read.” – Gregg Shapiro, journalist and Chicago Gay & Lesbian Hall of Fame inductee

"Ed Karvoski Jr. beats the odds and gathers more than 30 very funny gay and lesbian comics in one volume. ... A really important book, A Funny Time to Be Gay is a history of gay and lesbian comedy, social commentary, public debate and private lives. Check it out." – Andrea L.T. Peterson, GAY PEOPLE'S CHRONICLE (Cleveland)

"The result of Karvoski's passion for gay and lesbian humor is A Funny Time to Be Gay, a collection of comedy routines from legendary and new gay and lesbian comics. ... As any good comedian will tell you, timing is everything.  Karvoski's timing was impeccable." – Harriet L. Schwartz, OUT FRONT COLORADO (Denver) & SOUTHERN VOICE (Atlanta)

"A Funny Time to Be Gay chronicles the rise of gay stand-up and gives it historical perspective." – J.S. Hall, BAY WINDOWS (Boston)

"As both a performer and a writer Karvoski has gained an insider's view of the entertainment industry as it affects gay performers. ... The interviews that precede the monologues are not only entertaining, but informative. ... There are no closets in Karvoski's book, just page after page of humor and a very good read."  –  Lester Strong, WATERMARK (Orlando)

A Funny Time to Be Gay