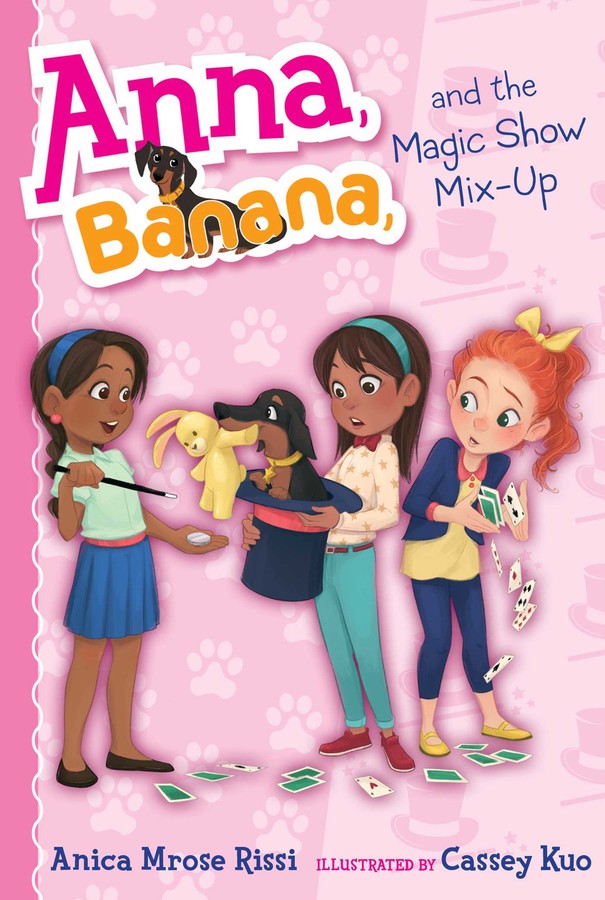 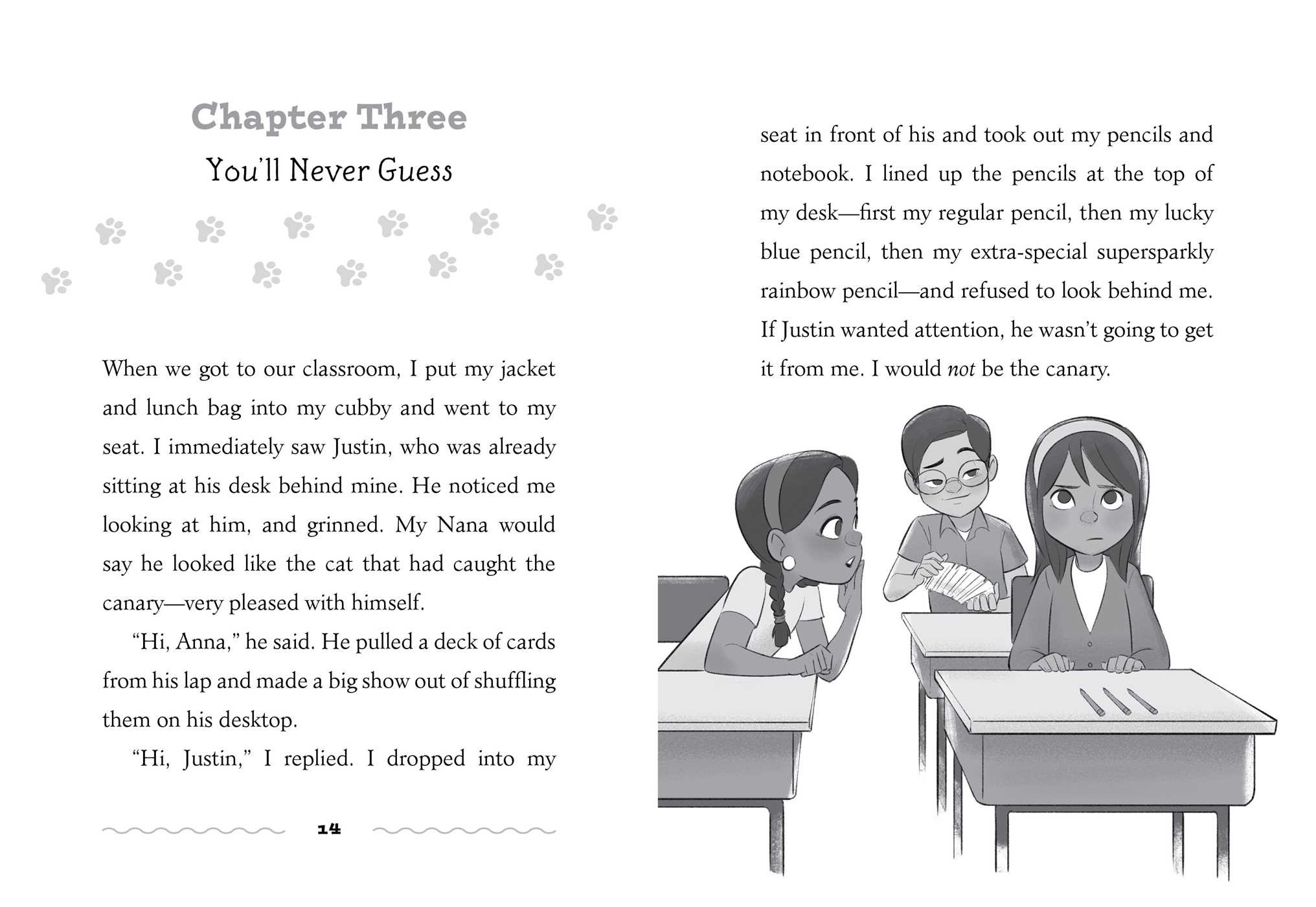 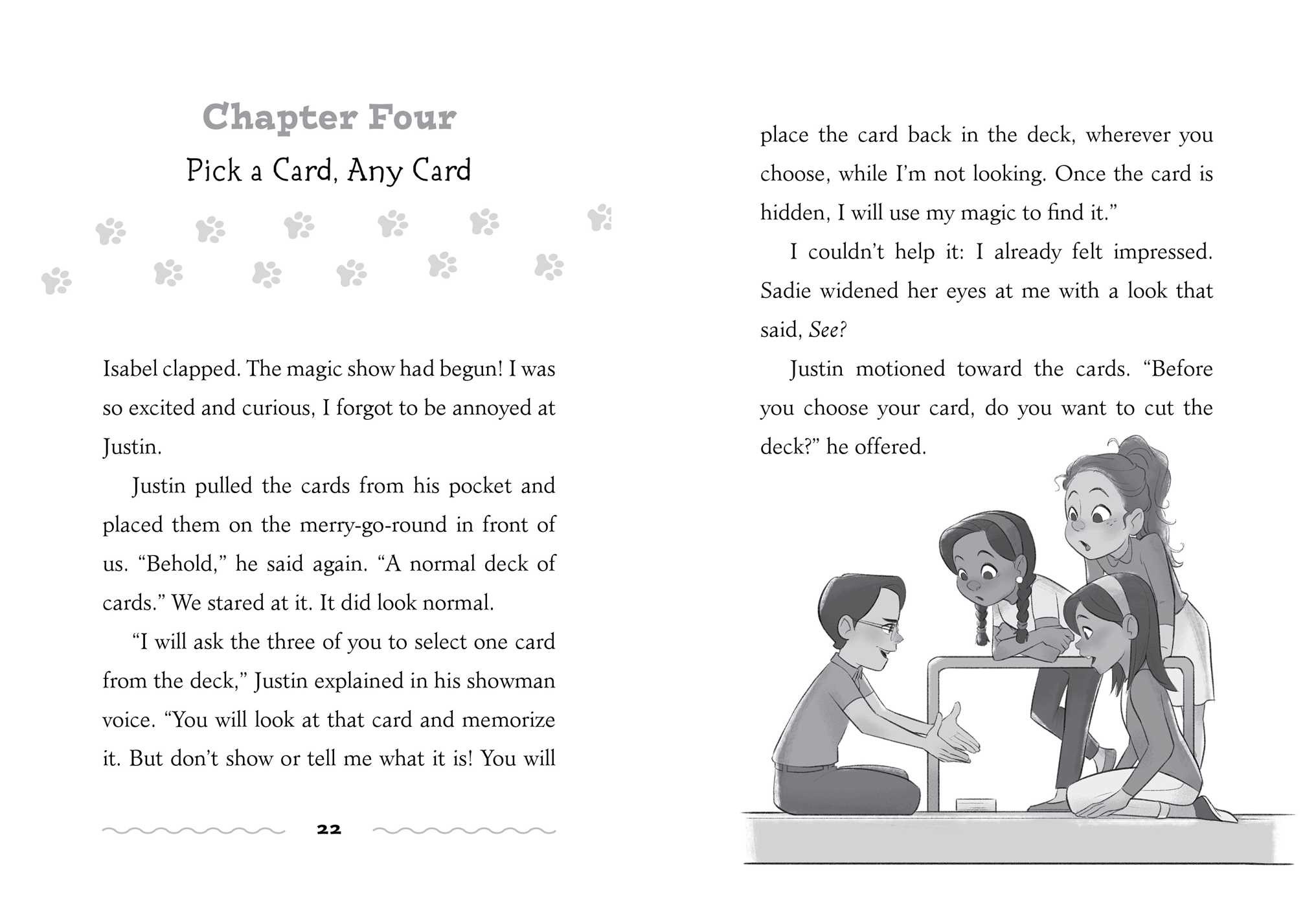 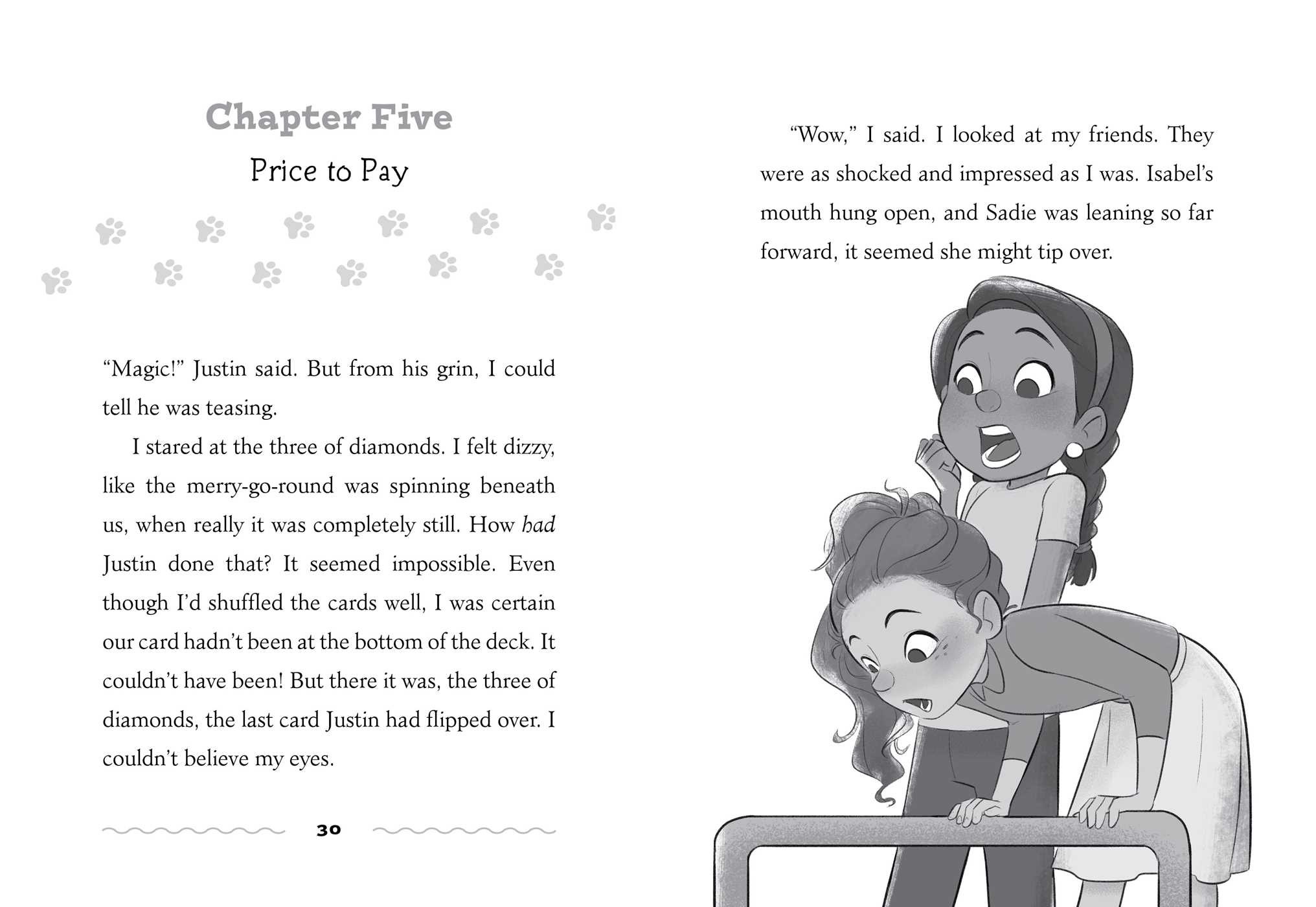 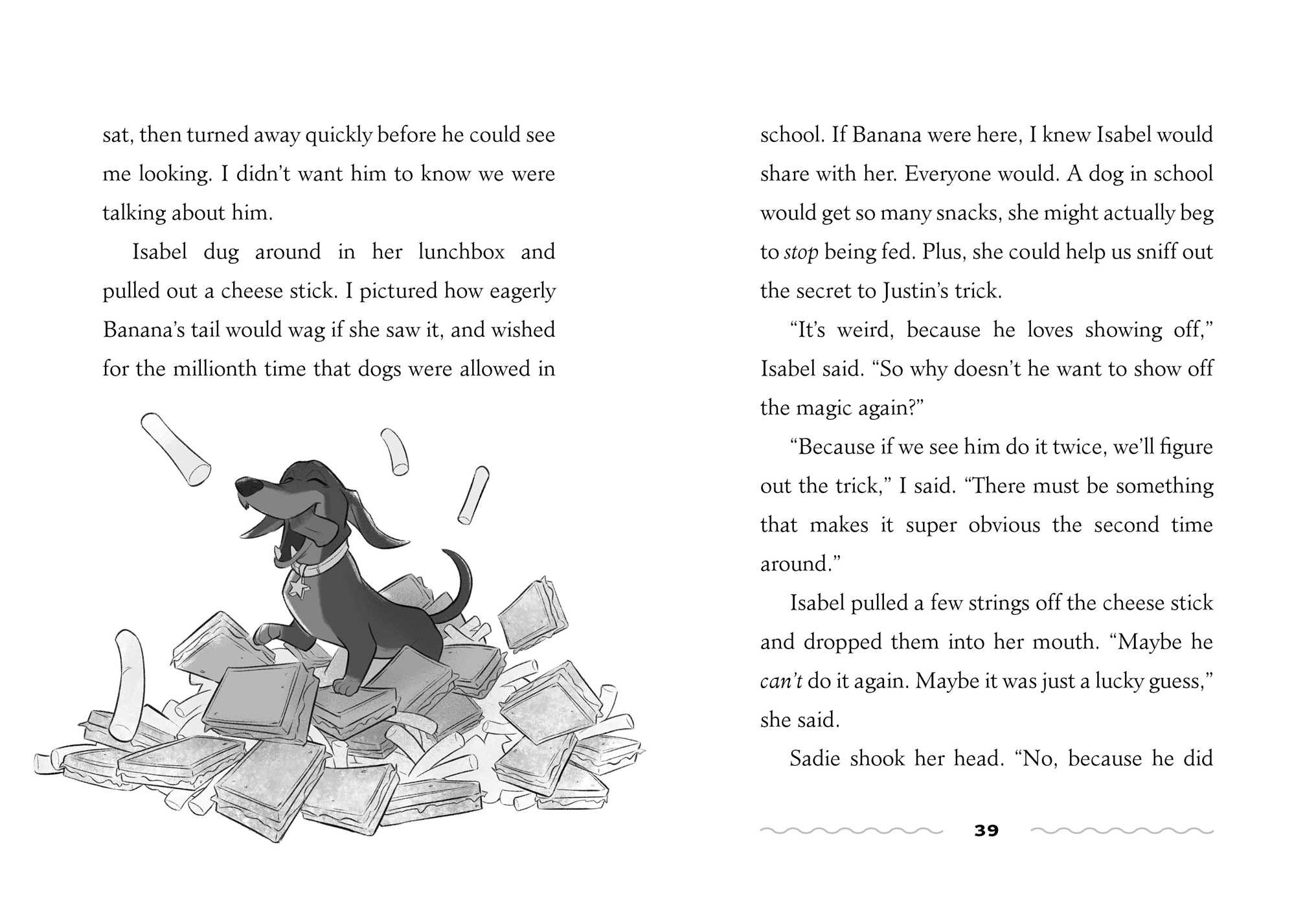 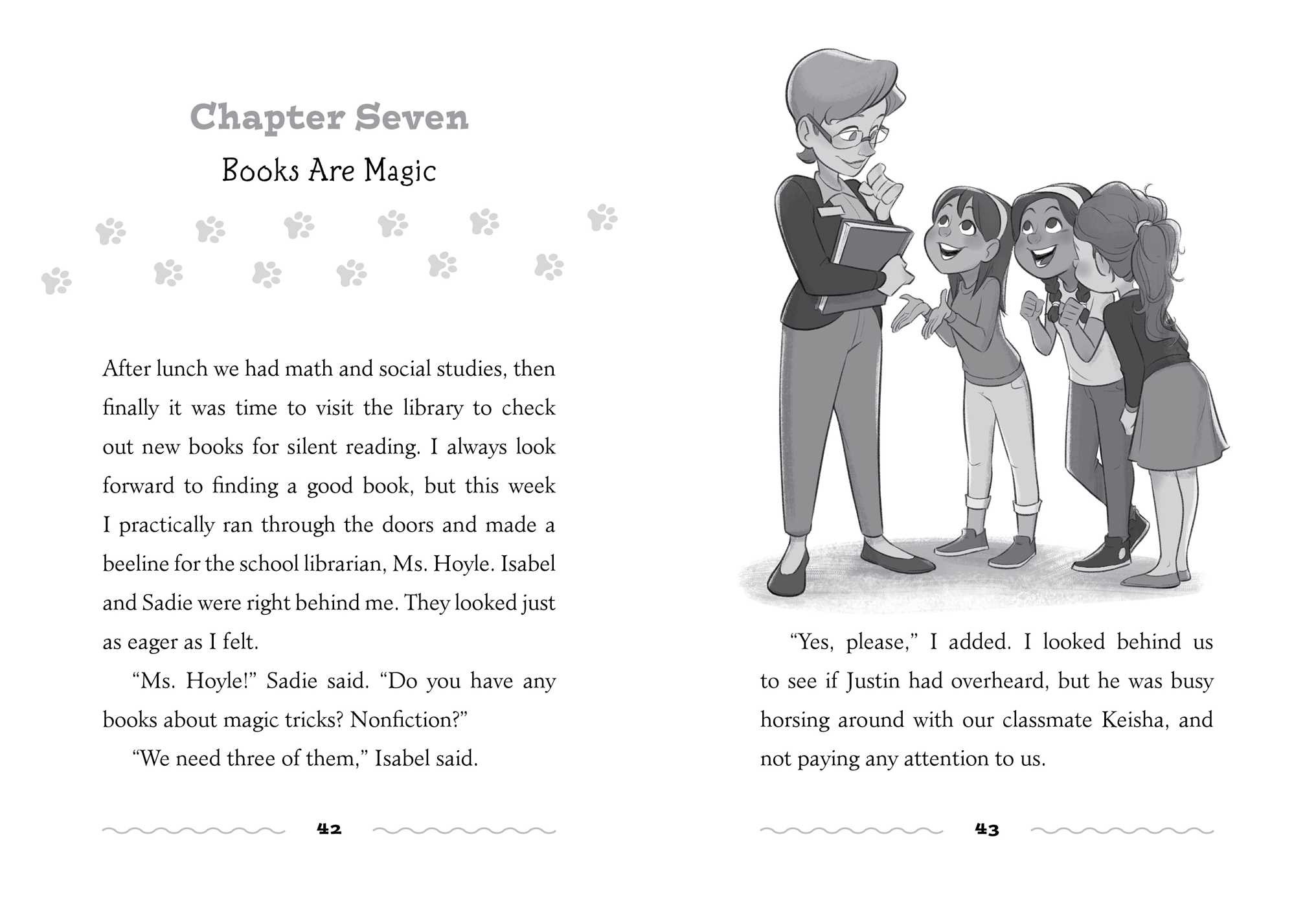 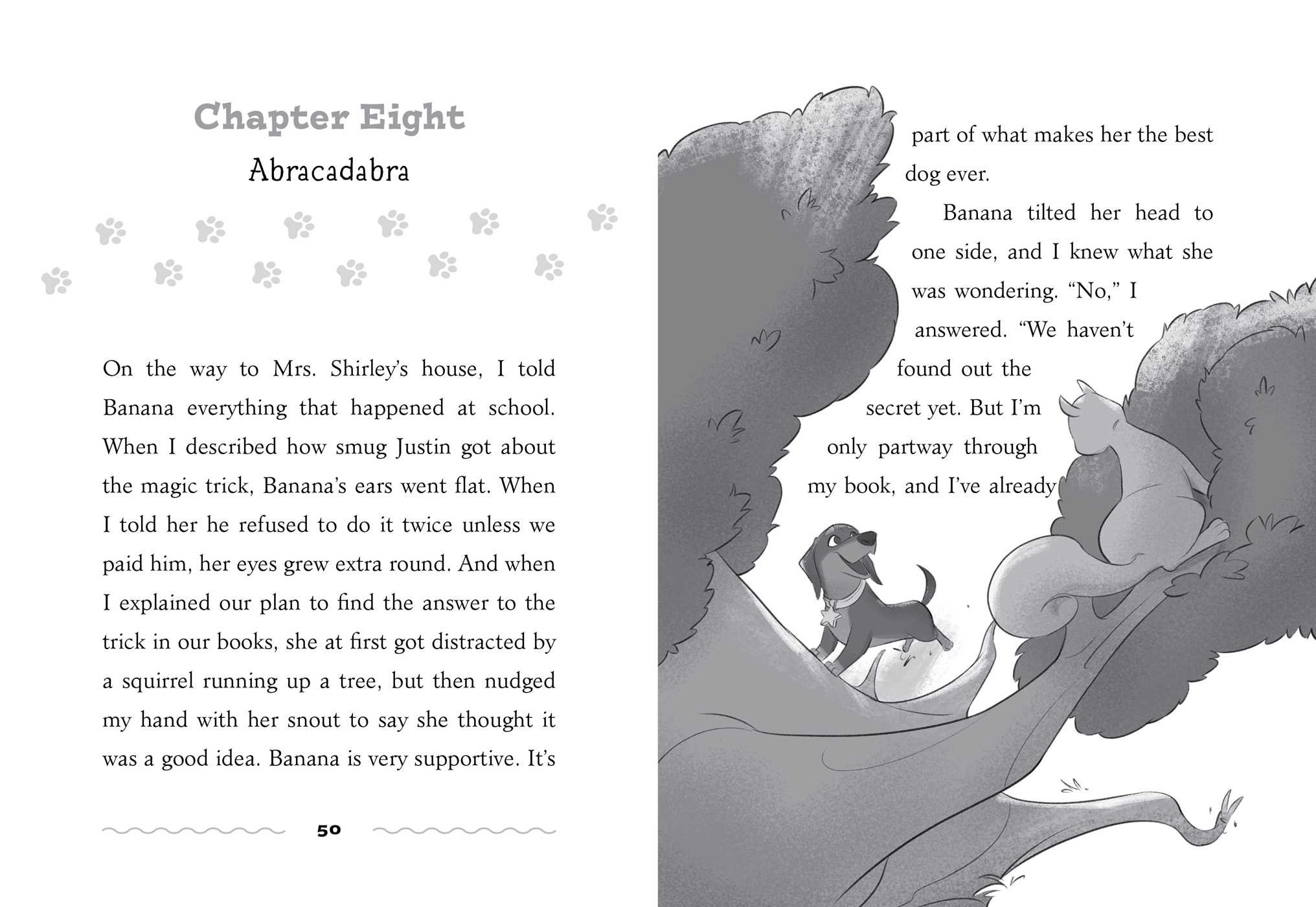 When preparing for a magic show, Anna and her friends find a talent for trouble instead in the eighth book of this “fast-paced, fun, and funny” (Megan McDonald, bestselling author of the Judy Moody series) illustrated chapter book series about the joys and challenges of elementary school friendships.

Anna, Sadie, and Isabel develop an interest in magic tricks when their frenemy Justin mystifies them with a cool card trick but refuses to tell them how he did it. Determined to figure it out for themselves, the girls set out for the best place to find answers—the library!—ready to learn every magic trick in the book.

But magic isn’t as easy as it appears, even with a book of instructions. When Anna goes to her neighbor Mrs. Shirley for advice, she finds out that while Mrs. S doesn’t know any magic tricks herself, her very favorite birthday party ever was a magician show where the magician pulled a rabbit out of a hat. With the neighborhood potluck coinciding with Mrs. Shirley’s seventy-sixth birthday, Anna and her friends decide to practice their own magic act to perform for her, but a whole slew of mix-ups ensue as they try to puzzle out how the tricks are done and how to figure out Justin’s secret, too. Can Anna and her friends perform some magic and get the mix-ups under control before—presto—it’s showtime?


“Okay, my turn to start,” my best friend Isabel said. She shimmied on the big rock where we were sitting out on the playground, waiting for the first bell to ring. Our other best friend, Sadie, wasn’t there yet. Her bus was late.

“Once upon a time, there was a tiny dragon with a huge secret,” Isabel said. She lifted her eyebrows in my direction.

I grinned. That was a great start to a story. Now it was my turn to add a sentence—that was the game we were playing.

I thought for a second. “The dragon’s secret was so embarrassing, she hadn’t even told it to her best friend the unicorn, or her other best friend, the magic puppy,” I said. I almost always put a dog in our stories. Sometimes I even put in my dog, Banana, but not this time. Banana isn’t a magic puppy. She’s a funny little wiener dog, all long and skinny in the middle, like a banana.

Isabel added the next sentence. “The secret was, the dragon didn’t know how to fly.”

“Ooh.” I liked that. My brain lit up like a sparkler, full of ideas for what could come next. “The dragon hid her secret by pretending the reason she never flew was to stay on the ground with her friend, because the puppy couldn’t fly either,” I said.

If I could fly but my friends couldn’t, I would walk with them when we were together. “Magic puppies aren’t supposed to fly, but dragons and unicorns all know how,” I said.

Isabel nodded. “The dragon was afraid that if anyone learned her secret, they would make fun of her and not want to be her friend anymore,” she said.

“And she was afraid to practice on her own or take flying lessons at school, because someone might see her trying and failing,” I added.

“Also, she was afraid of heights,” Isabel said.

I leaned forward and wiggled my eyebrows. “But one day,” I said in my most dramatic voice, “the unicorn discovered her secret.”

Our teacher, Ms. Burland, says that stories should have a beginning, a middle, and an end. This felt like the start to the middle: the part where things change.

“The dragon and the unicorn were walking to the puppy’s house, when the unicorn said they should fly over the mountain to get there faster,” Isabel said.

“Hmm.” I thought about how the dragon might respond. Would she make up an excuse? Or create a distraction? I thought she would want to be honest with her friend, but might also feel scared of telling the truth.

“The dragon said no, and when the unicorn asked her why, she started to cry,” I said. I waited to hear what Isabel would add next. I had no idea where the story was going. That was part of the fun!

“The unicorn listened carefully while the dragon told him her secret, and he didn’t laugh at all,” Isabel said. I smiled. Isabel was a good listener too. Almost as good as Banana.

“And then the unicorn told the dragon a secret of his own,” I said.

One of the best things about being best friends was sharing—and keeping—each other’s secrets. I could always trust Isabel and Sadie with mine. I didn’t know what the unicorn’s secret would be, but I had a feeling Isabel would come up with something good. I waited.

Before Isabel could continue the story, we saw Sadie running toward us, straight off the school bus. Her backpack bounced with each step.

“You’ll never guess what happened on the bus,” she said the second she reached us. She was out of breath from running fast, so the words came out in quick bursts. Her cheeks were pink with excitement.

“You saw a dragon?” Isabel guessed.

“I know! The bus driver turned into an ogre,” I said.

Sadie dropped her backpack on the ground next to Isabel’s and mine. “No! But the driver did yell at me, and it was all Justin’s fault. He was doing a trick,” she said.

I nodded in agreement. It did sound like Justin. He was always making jokes and playing tricks. He could be funny sometimes, but when he was showing off he could also be annoying.

Sadie usually laughed at his jokes and shrugged off his tricks. It was strange for her to be worked up about him. “Was the trick mean?” I asked. 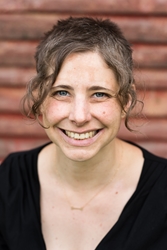 Anica Mrose Rissi grew up on an island off the coast of Maine, where she read a lot of books and loved a lot of pets. She now tells and collects stories, makes up songs on her violin, and eats lots of cheese with her friends in Princeton, New Jersey, where she lives with her dog, Arugula. Find out more at AnicaRissi.com and follow @AnicaRissi on Twitter.

Cassey Kuo is a visual development artist and illustrator. Born and raised in New Jersey, she has enjoyed drawing for as long as she can remember and now spends nearly all of her time creating art. When she is not hidden in the studio, she can be found dancing, rock climbing, and generally staying active. Find out more at Kckuo.com and follow @Sleepy_KC on Instagram.