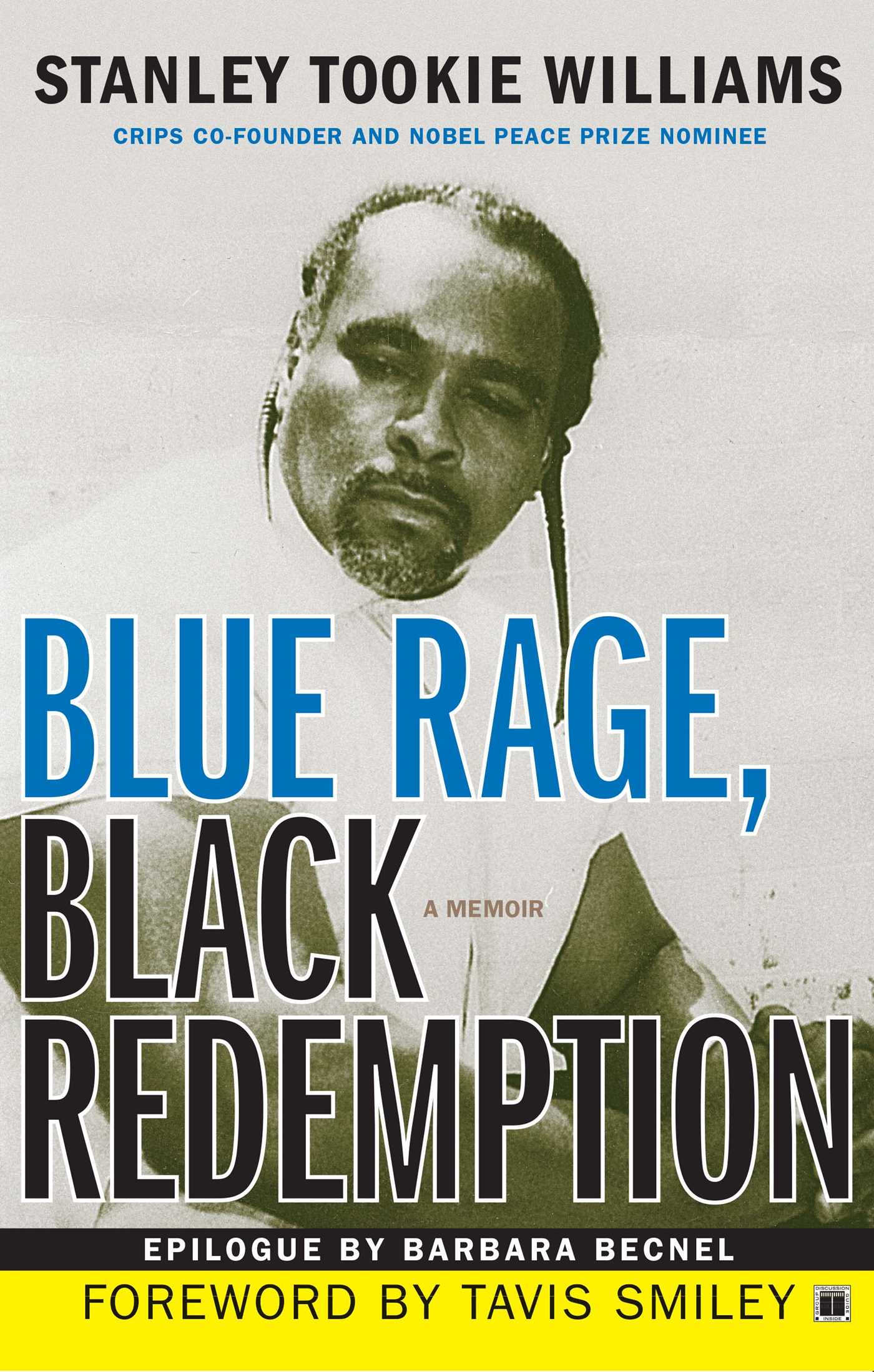 A gripping tale of personal revolution by a man who went from Crips co-founder to Nobel Peace Prize nominee, author, and antigang activist

When his L.A. neighborhood was threatened by gangbangers, Stanley Tookie Williams and a friend formed the Crips, but what began as protection became worse than the original gangs. From deadly street fights with their rivals to drive-by shootings and stealing cars, the Crips' influence -- and Tookie's reputation -- began to spread across L.A. Soon he was regularly under police surveillance, and, as a result, was arrested often, though always released because the charges did not stick. But in 1981, Tookie was convicted of murdering four people and was sent to death row at San Quentin in Marin County, California.

Tookie maintained his innocence and began to work in earnest to prevent others from following his path. Whether he was creating nationwide peace protocols, discouraging adolescents from joining gangs, or writing books, Tookie worked tirelessly for the rest of his life to end gang violence. Even after his death, his legacy continues, supported by such individuals as Archbishop Desmond Tutu, Snoop Dogg, Jesse Jackson, and many more.

This posthumous edition of Blue Rage, Black Redemption features a foreword by Tavis Smiley and an epilogue by Barbara Becnel, which details not only the influence of Tookie's activism but also her eyewitness account of his December 2005 execution, and the inquest that followed.

By turns frightening and enlightening, Blue Rage, Black Redemption is a testament to the strength of the human spirit and an invaluable lesson in how rage can be turned into redemption.

Discussion Group Guide
The following questions serve as a foundation for your exploration of Blue Rage, Black Redemption.
1. What are your initial impressions of the author's style, tone of voice, and perspective? How does he manage to capture and hold your interest in his story? Do you trust his retelling? Why or why not? How does Stanley's use of foreshadowing affect your reading of his story?
2. Although Stanley is quick to defend his mother and acknowledges her love for him, he believes that he and his mother's mindsets about the world and the best way to live life differ and are in conflict. How would you characterize Stanley and his mother's views? How do they develop? Can you foresee a middle ground between their perspectives? Do you gravitate toward one more than the other? Explain.
3. Stanley's mother sought to help her son adjust to life in South Central Los Angeles in a number of ways. Identify the strategies she took. Why are her methods unsuccessful in changing Stanley's troublesome behavior? Why does Stanley believe her efforts failed? Can you envision other methods that may have been more successful to help deter Stanley from the gang life he followed?
4. What does Stanley mean by the term "dys-education"? Who or what provides opportunities for dys-education?
5. What are Stanley's initial perspectives on gangs? What strategies does he employ to deal with gangs? How and when did his view of gangs begin to change? 6. Define the purpose and the value of the Crips for Stanley. What are some of the metaphors that Stanley uses to illuminate his relationship to the Crips? Discuss the values, codes of conduct, and rites and rituals within the culture of the Crips gang.
7. Discuss the differences between Stanley and his alter ego, Tookie -- his real middle name and the name he was called by his gang friends as well as enemies. What does this alter ego provide for Stanley? Is one more real than the other? How so? Does the exploration of these values change your perspective on the Crips?
8. Stanley and Buddha's time at Banning High School and the boys' camp outside of San Diego stand in stark contrast to their lives in South Central Los Angeles. What do their experiences in both locations allow us to see about Stanley and his friend Buddha? What does it reveal about their lives and the roles they either choose or are forced to play?
9. What impact does Buddha's death have on Stanley? How does Stanley come to view his own mortality in light of Buddha's death? How does Stanley's perception of death evolve throughout his story?
10. Stanley's bus to trip to San Quentin reminds us of his fateful trip to South Central Los Angeles with his mother. How does the world he encounters in prison differ from the world he leaves behind in South Central? How are they similar? What approach does Stanley take to deal with the prison world?
11. Stanley leaves the Hole as if with new eyes. Describe his perceptual shift. What role does compassion play in his awakening?
12. What does Stanley mean by the process that he calls "instinctual consciousness"? Have you ever used such a process? Discuss occasions when this process may be necessary or useful.
13. Stanley's transformation reaches its zenith when he is given the name Ajamu Niamke Kamara by his peers and is acknowledged by others as a changed man. What is the significance of naming in Stanley's story?
14. What do you believe it means to be redeemed? Do we have commonly accepted ways of evaluating or talking about redemption? Do you believe in Stanley's redemption? Why or why not?
Enhancement to Your Book Club
1. Read one of Stanley Tookie Williams's children's books and discuss his approach to writing about gangs for children. Does the book reveal new insights about the author? What do you believe is the appropriate age for the book? If any members of your group have children, discuss whether they would share this book with their child. Consider reading the book with a child you know and discuss the relevant themes. Were there challenges to raising the topic of gangs with the child? What did you discover about gangs based upon your discussion with the child?
2. Reading a memoir provides ample opportunity to envision our own lives and the choices and paths we took or failed to take to arrive at our current state. Stanley conceived of his life in two parts, Blue Rage -- and later, Black Redemption. Try to locate a significant event or series of events that similarly divided your life into a before and an after period. Who did you believe you were before the event(s)? What were your values? What were your hopes and dreams? How did they change? Could others notice any of your changes? Why or why not? If you could name your before and after periods, what would you call them? Create your own memoir book cover with a brief introduction and bring it to share with your group.
3. Visit Tookie.com and print out his Protocol for Peace. Review the document prior to meeting with your group and make two concrete additions to any section of the document. Write each addition on separate 3-x-5 index cards. Bring your two index cards to the meeting and place them in a bowl. At some point in the meeting, perhaps during a snack break, have the group leader read all cards aloud. Discuss the merits of group members' suggestions. Stanley calls on all of us to participate in helping to create a safe and healthy community. How did it feel to contribute to the Protocol? What were your challenges to imagining a way to create peace? Which elements of the Protocol seemed doable?
Copyright © 2004 by Stanley Tookie Williams
Epilogue copyright © 2007 by Barbara Becnel
Stanley Tookie Williams

Stanley Tookie Williams, activist and author, was nominated for the Nobel Peace Prize five times and the Nobel Prize in literature four times. He is the only man in history to be nominated while imprisoned. He was executed in 2005.

"Tookie learned the hard way that belonging to a gang is not smart. I salute him for his courage and determination to overcome his circumstances." -- Archbishop Desmond Tutu, Nobel Peace Prize laureate

"Some of the most vital peacemakers arise out of the very heart of the most destructive spaces. Tookie's story is proof of this." -- Luis Rodriguez, author of Always Running