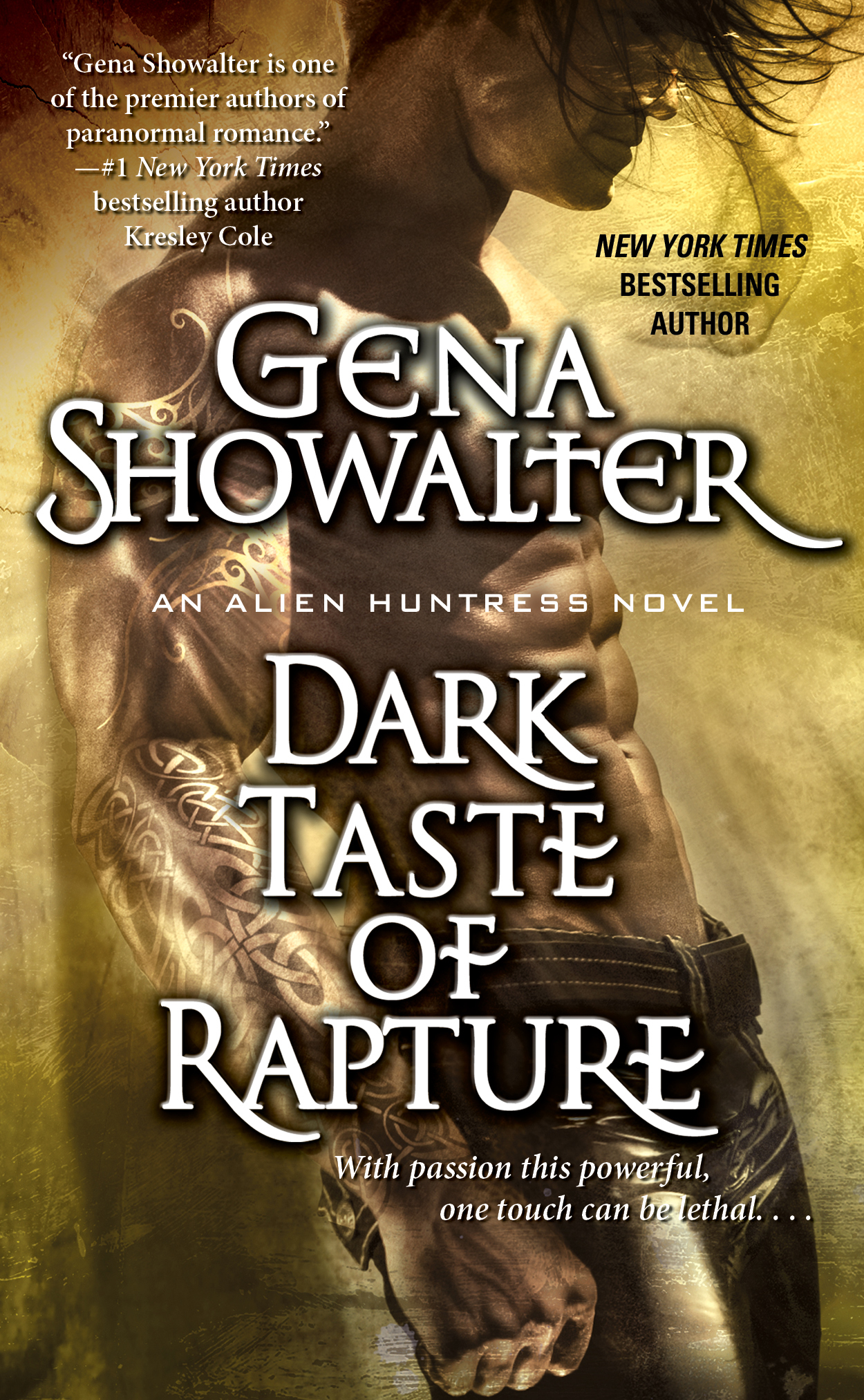 New York Times bestselling author Gena Showalter captivates with a dark, tantalizing world of humans, otherworlders, and a powerful AIR agent consumed by his desire for a woman he can never have. . . .

With one caress, he can give unforgettable pleasure . . . or unending pain. . . .

Hector Dean is shaved, tattooed, and totally ripped—and he has a deadly secret. He is a walking weapon, capable of killing with a single brush of his fingertips. Little wonder he’s determined to remain on his own. But Noelle Tremain is a temptation like no other. She is beautiful and rich, with a party girl smile that hides a shocking vulnerability, and from the beginning his sizzling attraction to her is undeniable. For the first time, his stone-cold resistance is tested. But to be with her, he risks destroying her.

When a wealthy businessman is murdered in New Chicago’s seediest district, the two are partnered, and there’s no escaping what they both want: each other. Yet neither Hector nor Noelle knows what to fear more—the killer case, or their own lethal desires. . . .


TWO MEN STOOD IN the middle of a shadowed, barren field. Both were human. One was tall, muscled, with dark hair and a busted-up face. His syn-cotton shirt was torn, his jeans dirty, and his boots scuffed. There were telltale weapon bulges under his arms, at his wrists, and at his ankles.

Clearly, he was the bodyguard.

The other wore a perfectly tailored silk business suit, his Italian loafers freshly polished. His sun-kissed hair was expensively coiffed, and the only bulge he sported was the one in his pocket, where he kept his wallet.

Clearly, he was the money.

Acrid wind shrieked as if someone had cranked a hard rock song on a radio, dancing thick dirt granules in every direction, Money radiated impatience mixed with glee—until two other men materialized a few feet away, and the impatience vanished.

The newcomers had appeared in a blink, without walking a single step: a white-haired Arcadian—an otherworlder with the ability to teleport, among other things—and another human, this one wearing a suit as well, only his was ill-fitting and made from a cheap synthetic fiber.

The human’s arms were cuffed behind his back. He smelled of pungent fear and urine. Poor bastard must have pissed himself.

Without a word, the Arcadian pushed the trembling male to his knees.

Night’s about to get interesting.

The rust-colored sky appeared swollen, the storm-drenched clouds ready to burst. In the center, the sun was a hemorrhaging hook of gold, offering only a fraction of light. That hardly mattered to the witness. From high in the gnarled trees surrounding the field, his gaze cut through the gloom as easily as a knife through flesh.

“You think you can encroach on my territory?” Money snarled down at the kneeler. Another gust of wind created that perfect background music.

“You thought … hoped …” Money sneered. No question, he was a man used to getting what he wanted, when he wanted it. He held out his hand, and Bodyguard smacked the butt of a pyre-gun onto his palm. “Well, your thoughts and hopes just got you killed.”

“No!” Kneeler sobbed like a baby. “Please! Don’t do this. I’ll leave New Chicago. I won’t ever come back. I swear!”

Money nodded to the Arcadian, who jerked his T-shirt over his head and stuffed the material in Kneeler’s mouth. Kneeler shook his head, perhaps to dislodge the cloth, perhaps to attempt another plea for mercy.

Either way, he failed.

“You were right, you know,” Money said, smug now. “You won’t ever come back.” A blaze of yellow light erupted from the barrel of the gun, arrowing out and nailing Kneeler in his chest.

A muffled scream of agony pierced the air. As Kneeler toppled to the ground, twitching, dying as his organs fried to a crisp, Money returned the gun to Bodyguard and wiped his hands in a job well done.
Gena Showalter

Gena Showalter is the New York Times and USA TODAY bestselling author of more than fifty novels and multiple series, including the spellbinding Otherworld Assassins, Alien Huntress, and Lords of the Underworld series, her wildly popular young adult novels—Firstlife and Alice in Zombieland—and the highly addictive Original Heartbreakers series. Visit her at GenaShowalter.com and Facebook.com/GenaShowalterFans.

SEE ALL
See more by Gena Showalter
Thank you for signing up, fellow book lover!