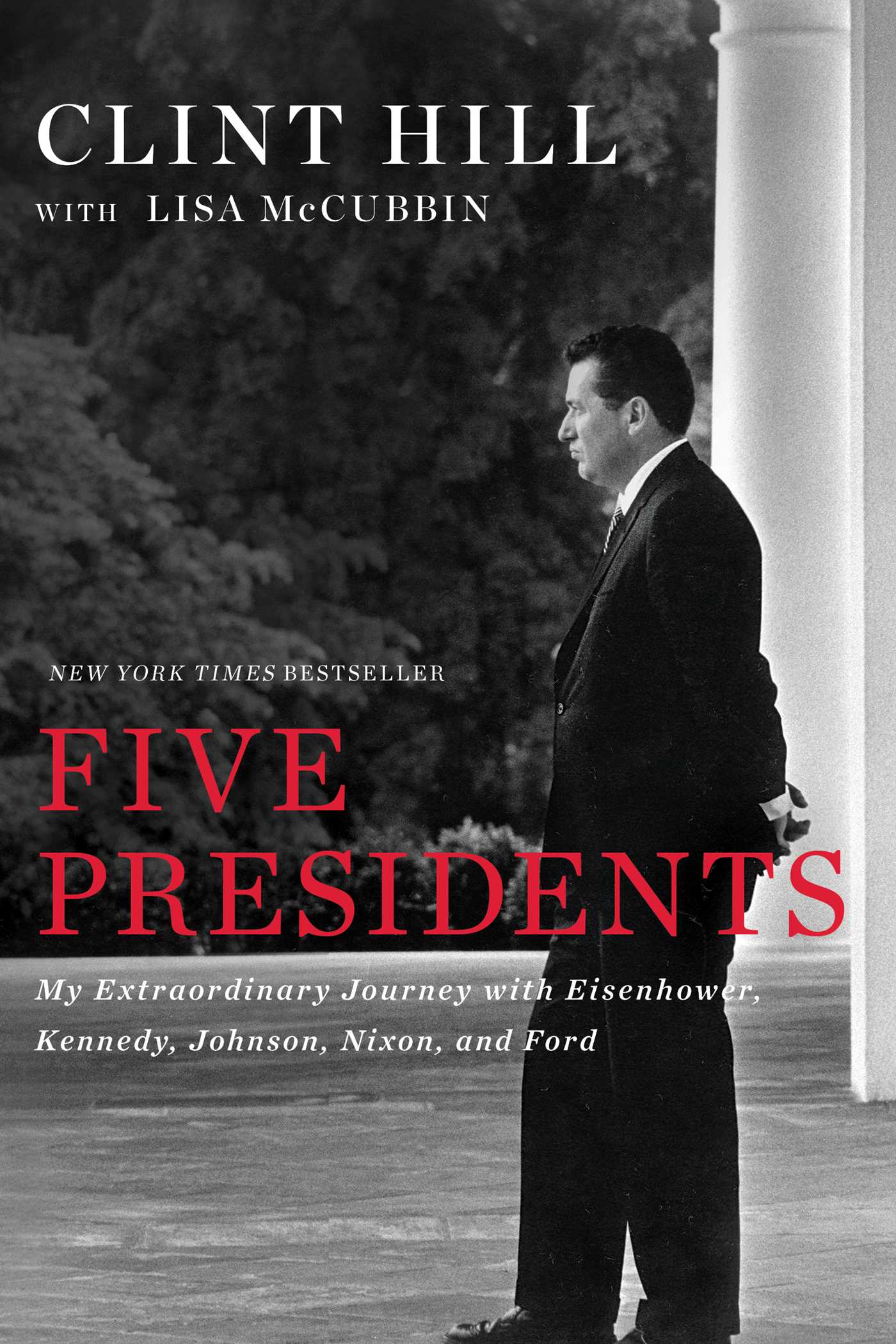 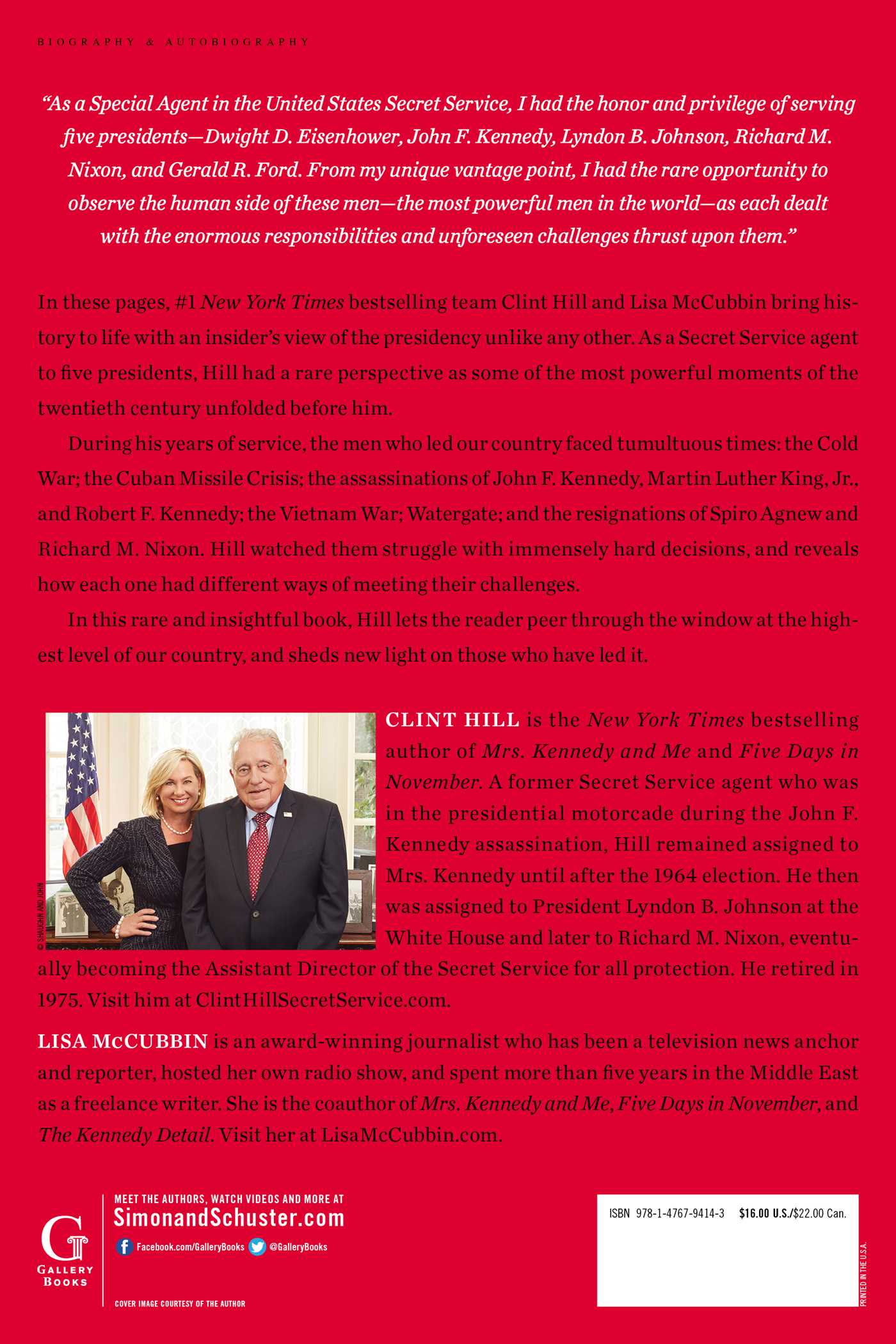 My Extraordinary Journey with Eisenhower, Kennedy, Johnson, Nixon, and Ford

The #1 New York Times bestselling author of Mrs. Kennedy and Me and Five Days in November reflects on his seventeen years on the Secret Service for presidents Eisenhower, Kennedy, Johnson, Nixon, and Ford.

The assassination of one president, the resignation of another, and the swearing-in of the two who followed those traumatic events. Clint Hill was there, on duty, through Five Presidents.

After an extraordinary career as a Special Agent on the White House Detail, Clint Hill retired in 1975. His career spanned the administrations of Dwight D. Eisenhower, John F. Kennedy, Lyndon B. Johnson, Richard M. Nixon, and Gerald R. Ford. A witness to some of the most pivotal moments in the twentieth century, Hill lets you walk in his shoes alongside the most powerful men in the world during tumultuous times in America’s history—the Cold War; the Cuban Missile Crisis; the assassinations of President John F. Kennedy, Martin Luther King, Jr., and Robert F. Kennedy; the Vietnam War; Watergate; and the resignations of Vice President Spiro Agnew and President Nixon.

It was indeed a turbulent time—and through it all, Clint Hill had a unique insider perspective. His fascinating stories will shed new light on the character and personality of each of these five presidents, as Hill witnesses their human sides in the face of grave decisions.

Five Presidents INTRODUCTION Walking Beside History
As a Special Agent in the United States Secret Service, I had the honor and privilege of serving five presidents—Dwight D. Eisenhower, John F. Kennedy, Lyndon B. Johnson, Richard M. Nixon, and Gerald R. Ford—three Republicans and two Democrats. From my unique vantage point, I had the rare opportunity to observe the human side of these men—the most powerful men in the world—as each dealt with the enormous responsibilities and unforeseen challenges thrust upon them, and how their individual characters and personalities affected grave decisions.

My seventeen years in the Secret Service spanned the period that encompassed the U-2 spy incident; the Cold War; the Cuban Missile Crisis; the assassinations of President John F. Kennedy, Martin Luther King Jr., and Robert F. Kennedy; the civil rights movement, riots and burning of major U.S. cities; the Vietnam War; Watergate; and the resignations of Vice President Spiro T. Agnew and President Nixon. In less than two decades, America went from being unquestionably the most respected and admired nation in the world to a country whose image had become tarnished by violence, scandal, and deceit.

It is interesting to note that of these five presidents, only Eisenhower had a normal run as president—elected by the people and serving two full terms. Kennedy was elected in 1960 by the slimmest of margins, and his term lasted just one thousand days, cut short by an assassin. Suddenly, the vice president became president. Johnson was reelected the following year, but when the demands of the office and the casualties of the Vietnam War became more than he could bear, he chose not to run for a second term. Nixon was elected in 1968, and again in 1972, but in the wake of the Watergate scandal, he became the first United States president to resign, in 1974. A year earlier, when Nixon’s vice president, Spiro Agnew, resigned in disgrace, Nixon appointed Gerald Ford as vice president. Thus, upon Nixon’s resignation, Ford became president, never having been elected to the office.

It was a turbulent time, and there I was, in the middle of it all.

As with our two previous books, my talented writing partner, Lisa McCubbin, and I have attempted to bring history to life through my experiences. While Mrs. Kennedy and Me focused on my interactions with Jacqueline Kennedy, and Five Days in November detailed those tragic days surrounding the assassination, the Kennedy section in this book focuses on my observations of and interactions with President Kennedy. There is unavoidably some overlap, but the recollections of my years with Eisenhower, Johnson, Nixon, and Ford are revealed here for the first time.

There is no doubt that the assassination of President Kennedy was a defining moment for me, and it would affect me on many levels for the rest of my life. I was thrust onto the pages of history, but it has often bothered me that I would be remembered solely for my actions on that one day. For there was much that led up to that moment, and much that followed.

Like the five presidents I served, there were many things that influenced the decisions I made, the actions I took, the man I became.

It has indeed been an extraordinary journey. 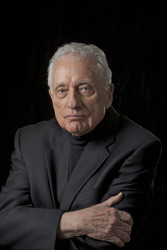 Clint Hill is the New York Times bestselling author of Mrs. Kennedy and Me and Five Days in November. A former Secret Service agent who was in the presidential motorcade during the John F. Kennedy assassination, Hill remained assigned to Mrs. Kennedy until after the 1964 election. He then was assigned to President Lyndon B. Johnson at the White House and later to Richard Nixon, eventually becoming the Assistant Director of the Secret Service for all protection. He retired in 1975.

Lisa McCubbin is the coauthor of four New York Times bestsellers: Five Presidents; Mrs. Kennedy and Me; Five Days in November; and The Kennedy Detail. A former television news anchor and reporter, she currently resides in the San Francisco Bay area. Visit her at LisaMcCubbin.com.

My Extraordinary Journey with Eisenhower, Kennedy, Johnson, Nixon, and Ford