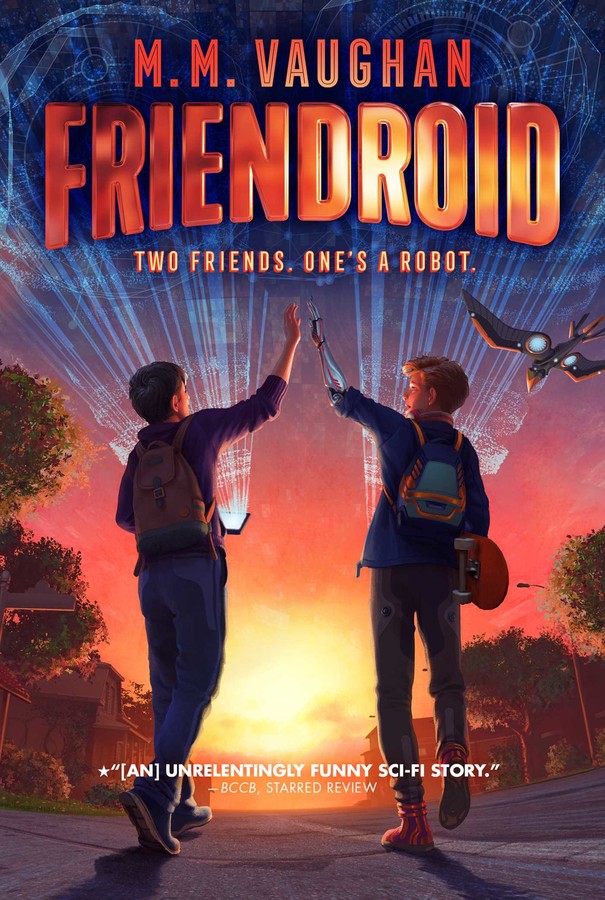 Stranger Things meets robots in this sweet and “noteworthy” (Booklist) story about an unlikely friendship between two boys—one human, one android.

For Danny, it becomes hard to ignore Eric’s super strange tendencies. He has weekly “dentist” appointments and parents who never stop smiling. It’s almost impossible to wake him up and he’s always getting fancy gifts from his mysterious uncle. Danny always assumed that Eric was just a spoiled rich kid…until he discovers Eric’s hidden robot reality.

As the two friends dig deeper into Eric’s origins and purpose, powerful forces swarm into town, and Danny and Eric are left with more questions than answers—and more danger than humanly possible.

Friendroid Slick: MONDAY, OCTOBER 8
Today was the day I found out that I had made my first real friend. I was 75 percent certain Harry was my friend before this morning, but it wasn’t until I got an invitation to his birthday party that I knew for certain. When he gave me the invitation, he looked annoyed. At first I thought this might mean that he didn’t really want me to come and that he’d been made to ask me because I was new, but then he apologized for the lame invite. He said his mother had made him give them out so that she could keep track of the numbers coming. That’s when I understood that feeling angry can look a lot like feeling embarrassed.

I don’t know why it bothered him so much. I like the invitation—it has skateboards all around it. I love skateboarding. At the top it says Let’s Sk8 to Celebrate, and then a list of all the information: date, time, and place. It was very clear, and I could see his mother’s point: It must be hard to organize a party if you don’t know how many people will be coming. I couldn’t see Harry’s problem with it.

Harry is just one of my friends. I have twenty.

One is 100 percent confirmed: Harry. See above.

Two of these are 75 percent confirmed friends: Luke and Tyler. These are the people who invite me to sit at their table at lunch and pick me for their teams, and who I have seen outside of school.

Three of these are 65 percent confirmed friends: Mateo, Jake, and Theo. These are the people who invite me to sit at their table at lunch and pick me for their teams.

Fourteen are 50 percent confirmed friends. These are the people that I have had more than two conversations with (not schoolwork related) since I got here.

I don’t have a best friend. Maybe when I’ve been here longer, I’ll have one, but I think a month is probably not long enough to choose a best friend yet.

I now have 457 friends on Kudos. I had 320 when I arrived, but I don’t remember any of them. It’s weird how quickly you forget about your old life when it’s gone.

Of the 137 friends that I’ve made since we moved to Ashland, only eighteen are Real World Friends (RWFs). The rest are Virtual Friends (VFs), which are the same as Real World Friends, except you’ve only met them on the Internet. Most of my new VFs are friends of friends, so they will probably become RWFs at some point.

Luke has the most Kudos friends because he is a singer and has his own video channel (LuckyLuke7). The last song he uploaded, “In Your Dreams,” has 2,004,833 likes.

Harry said that nobody says “rad” anymore. I will stop saying “rad.”

Two girls commented on my profile picture today. One said, “Cute!” The other wrote three heart emojis. I replied, “Thank you very much,” as I haven’t met either of them and didn’t know what else to write. They don’t go to my school.

My profile picture is cool. That’s what Harry said, and the others agreed. It’s of me midair on my Baltic Wave skateboard, and I’m looking straight ahead at the sea. I put it up before we moved to Ashland. I don’t remember who took it.

Mom and Dad do not have Kudos accounts. This is because they are adults, so they only count their Real World Friends. Mom has thirty-nine RWFs. Five of these are 100 percent confirmed as they have invited her out to do something more than once. Dad has twelve RWFs, but none of these are 100 percent confirmed. Dad said that this is because men make friends in a different way from women and kids. 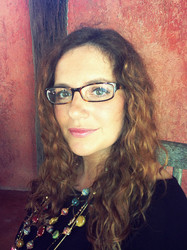 M.M. Vaughan (also known as Monica Meira) lives in the UK. She loves to write, to listen to Janis Joplin, and to embark on adventures of any kind. She is the author of The Ability, Mindscape, Six, and Me and My Friendroid.

"A timely parable for this generation of digital natives."

"For middle-grade readers who are ready to fight the power."