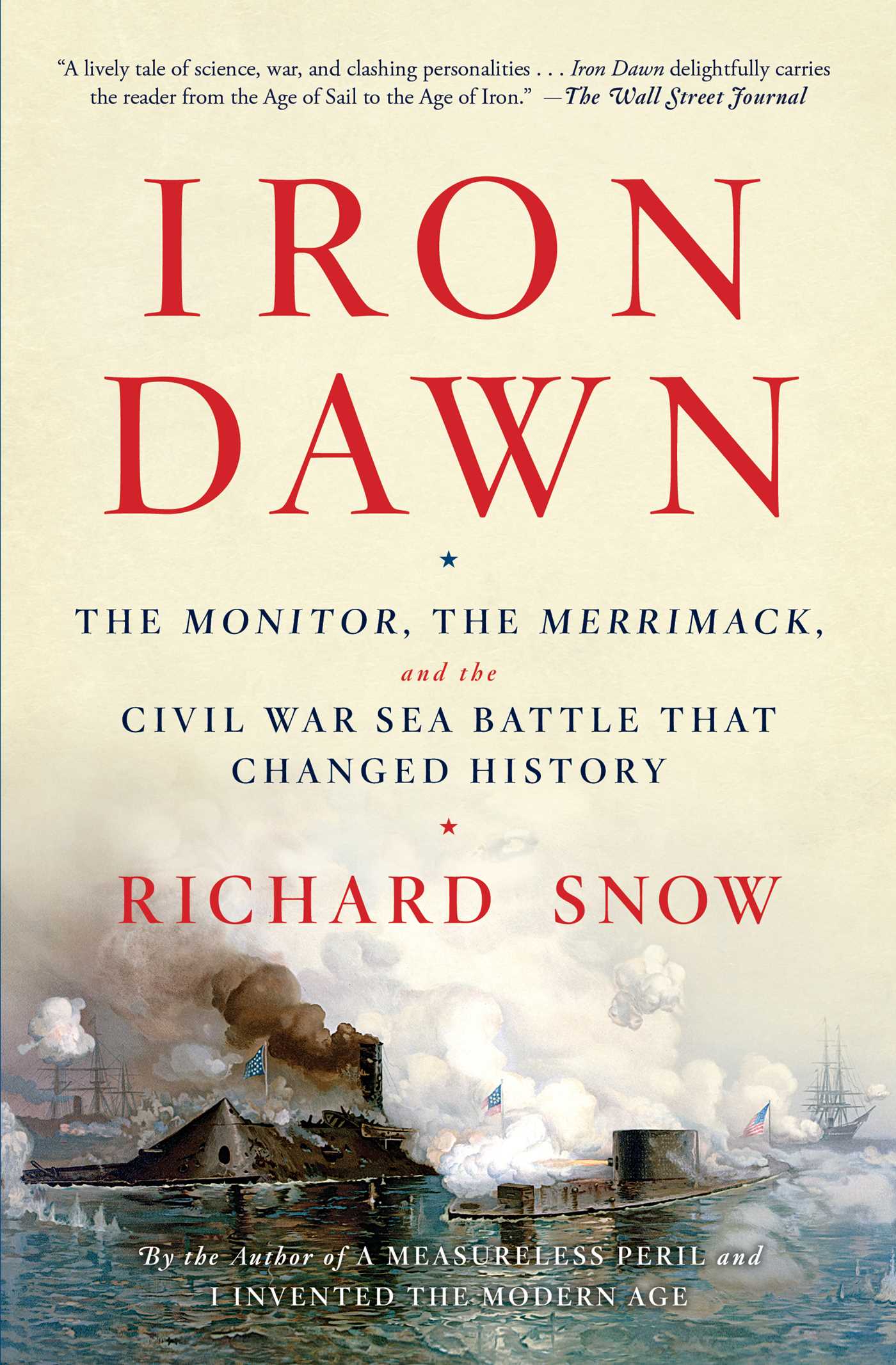 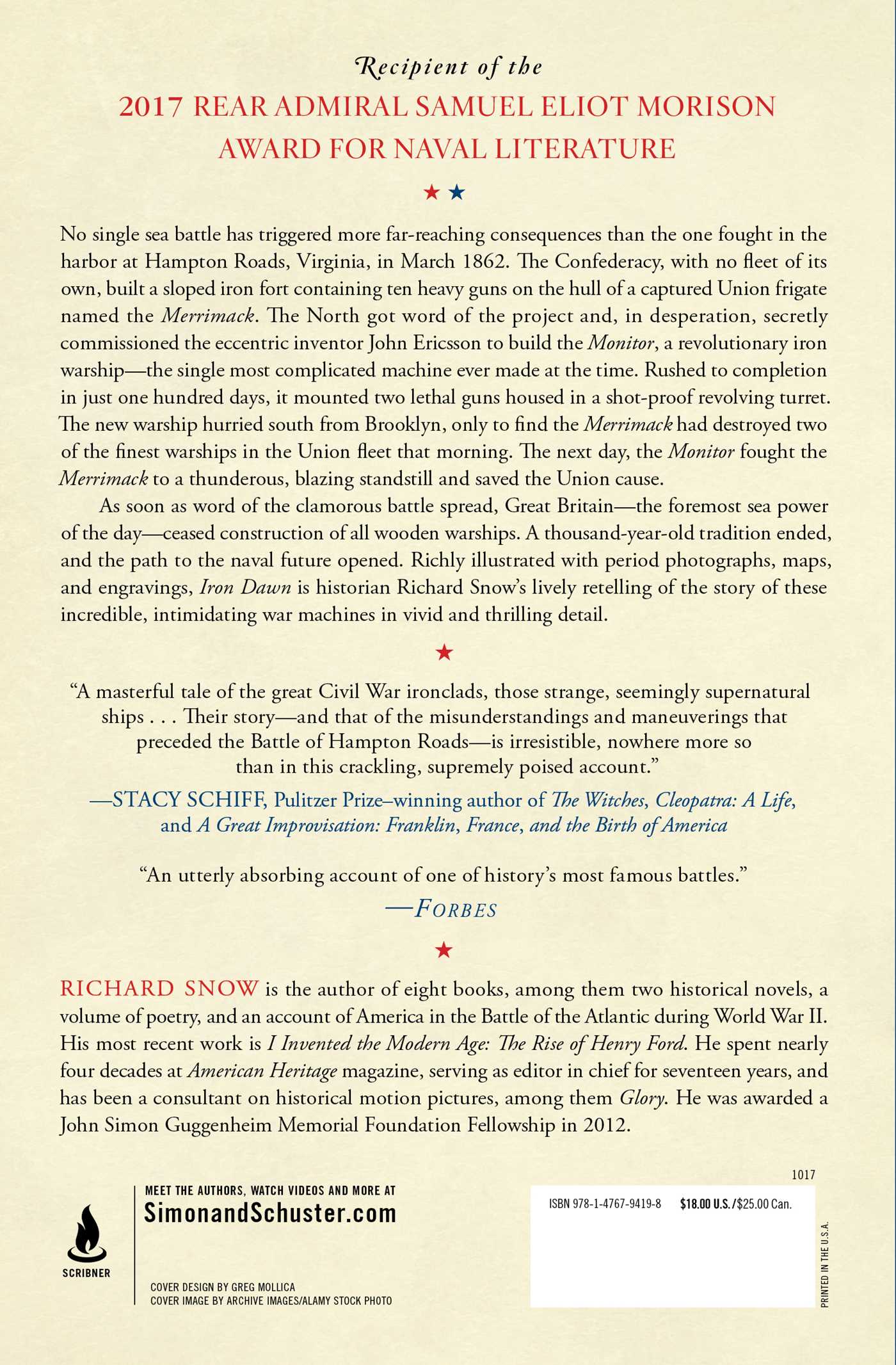 The Monitor, the Merrimack, and the Civil War Sea Battle that Changed History

“An utterly absorbing account of one of history’s most momentous battles” (Forbes) that not only changed the Civil War but the future of all sea power—from acclaimed popular historian Richard Snow, who “writes with verve and a keen eye” (The New York Times Book Review).

No single sea battle has had more far-reaching consequences than the one fought in Hampton Roads, Virginia, in 1862. The Confederacy, with no fleet of its own, took a radical step to combat the Union blockade, building an iron fort containing ten heavy guns on the hull of a captured Union frigate named the Merrimack. The North got word of the project, and, in panicky desperation, commissioned an eccentric inventor named John Ericsson to build the Monitor, an entirely revolutionary iron warship. Rushed through to completion in just one hundred days, it mounted only two guns, but they were housed in a shot-proof revolving turret. The ship hurried south from Brooklyn, only to arrive to find the Merrimack had already sunk half the Union fleet—and would be back to finish the job. When she returned, the Monitor was there. She fought the Merrimack to a standstill, and, many believe, saved the Union cause. As soon as word of the fight spread, Great Britain—the foremost sea power of the day—ceased work on all wooden ships. A thousand-year-old tradition ended and the naval future opened.

Richly illustrated with photos, maps, and engravings, Iron Dawn “renders all previous accounts of the encounter between the Monitor and the Merrimack as obsolete as wooden war ships” (The Dallas Morning News). Richard Snow brings to vivid life the tensions of the time in this “lively tale of science, war, and clashing personalities” (The Wall Street Journal). 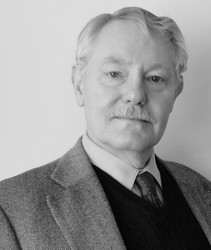 Richard Snow spent nearly four decades at American Heritage magazine, serving as editor in chief for seventeen years, and has been a consultant on historical motion pictures, among them Glory, and has written for documentaries, including the Burns brothers’ Civil War, and Ric Burns’s award-winning PBS film Coney Island, whose screenplay he wrote. He is the author of multiple books, including, most recently, Disney’s Land.

"A lively tale of science, war and clashing personalities . . . The charm of Iron Dawn comes from its ability to paddle between the quirky, prosaic world of inventors and bureaucrats and the hell of combat afloat, where death’s scythe swings as swiftly as on land. By keeping a human heart beating inside the keel of two extraordinary machines, Iron Dawn delightfully carries the reader from the Age of Sail to the Age of Iron."
—The Wall Street Journal

“With muscular vitality, vast knowledge of military technology, and a novelist's gift for capturing vivid detail, Richard Snow retells the story of Civil War ironclads as if it is unfolding before our startled eyes for the first time. The Monitor and Merrimack have never seemed more modern, dangerous, or revolutionary as they reappear in the hands of this master storyteller.”
—Harold Holzer, author of Lincoln and the Power of the Press: The War for Public Opinion and winner of the 2015 Gilder Lehrman Lincoln Prize

“A masterful tale of the great Civil War ironclads, those strange, seemingly supernatural ships.  One, Richard Snow tells us, looked like a rhinoceros, the other like a 'metal pie plate.'  Their story—and that of the misunderstandings and maneuverings that preceded the Battle of Hampton Roads—is irresistible, nowhere more so than in this crackling, supremely poised account.”
—Stacy Schiff, Pulitzer Prize-winning author of The Witches, Cleopatra: A Life, and A Great Improvisation: Franklin, France, and the Birth of America

"Everybody knows about the Monitor and the Merrimack, right? Well, actually, as it turns out, we don't. In Iron Dawn, Richard Snow opens up the vast, enthralling world of politics, war, technology, maritime history, and human drama that lies just back of that momentous battle. Snow is a terrific writer. I can't remember when I have had such sheer fun with a Civil War book."
—S.C. Gwynne, New York Times bestselling author of Rebel Yell and Empire of the Summer Moon

"Snow's energetic account encompasses issues large and small, including discussions of arms and armament; the origin of the word 'splinter'; the battle's inconclusive end; a Southern joke of the day ('Iron-plated?' 'Sir, our navy is barely contem-plated'); Lincoln's special interest in the Union's ironclad; the difference between shells and solid shot, the 'mystery' of the Merrimack's name; and the enthusiastic Monitor fever that swept the relieved, almost giddy North. A few notable naval battles changed the course of wars, even history, but the clash at Hampton Roads transformed the nature of warfare itself and offered a glimpse of the 'grim modernity' Snow vividly captures."
—Kirkus Reviews, starred review

“A terrific read, one which renders all previous accounts of the encounter between of the Monitor and the Merrimack as obsolete as the Merrimack and Monitor made wooden war ships.”
—Allan Barra, The Dallas Morning News

“Iron Dawn is a worthy read not only for serious Civil War buffs, but also for those who appreciate how ingenuity forever changed the way the military does battle on the sea.”
—BookPage

“An utterly absorbing account of one of history’s most momentous battles and the fascinating events and personalities that brought it about.”
—Forbes

“Iron Dawn is a magisterial account of one the most important battles in US naval history. It is also a wonderfully absorbing story about human beings in all their struggles both great and small.  Richard Snow has struck gold—or better yet, iron.”
—Dr. Amanda Foreman, author of A World on Fire: Britain’s Crucial Role in the American Civil War and Georgiana: Duchess of Devonshire

The Monitor, the Merrimack, and the Civil War Sea Battle that Changed History