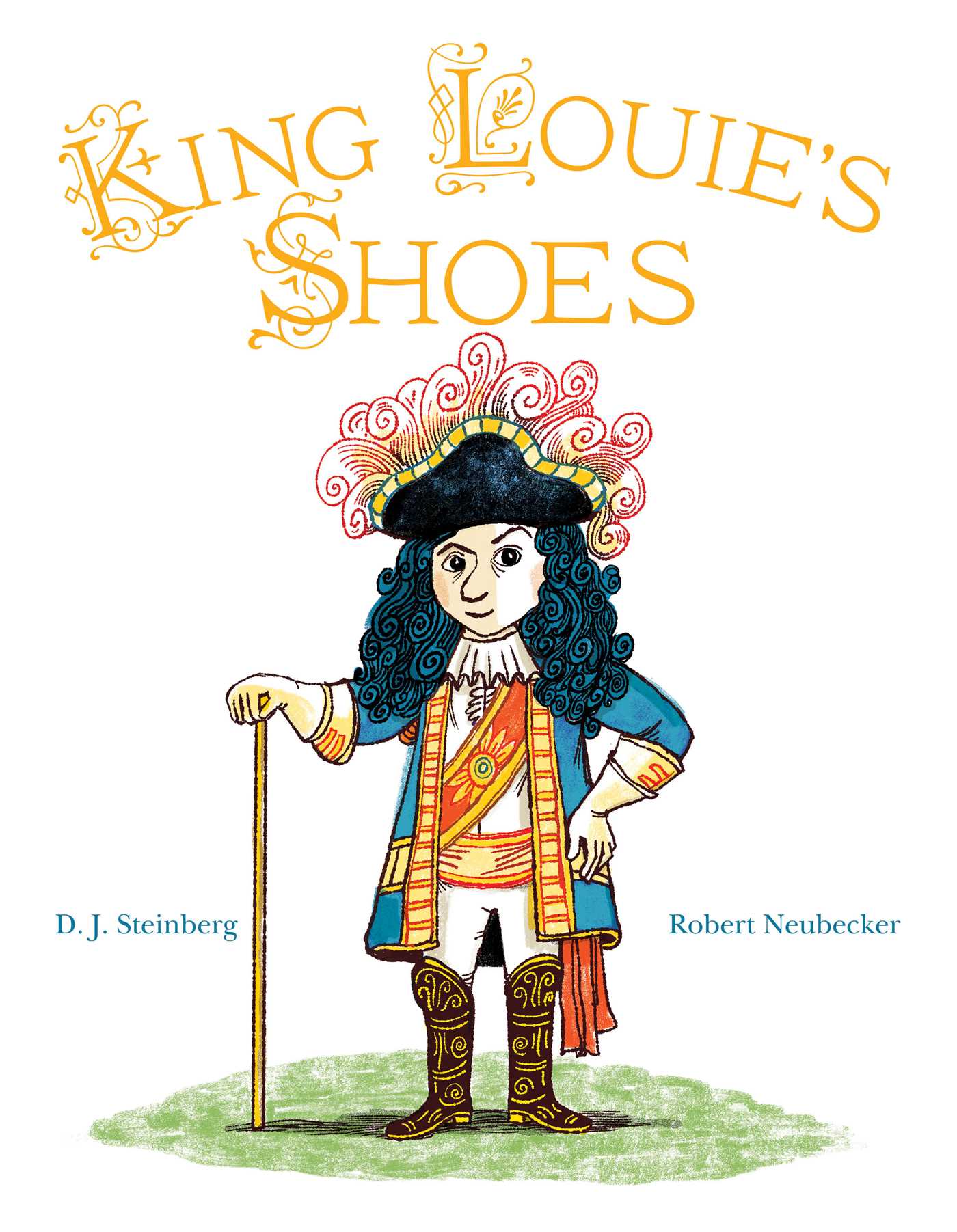 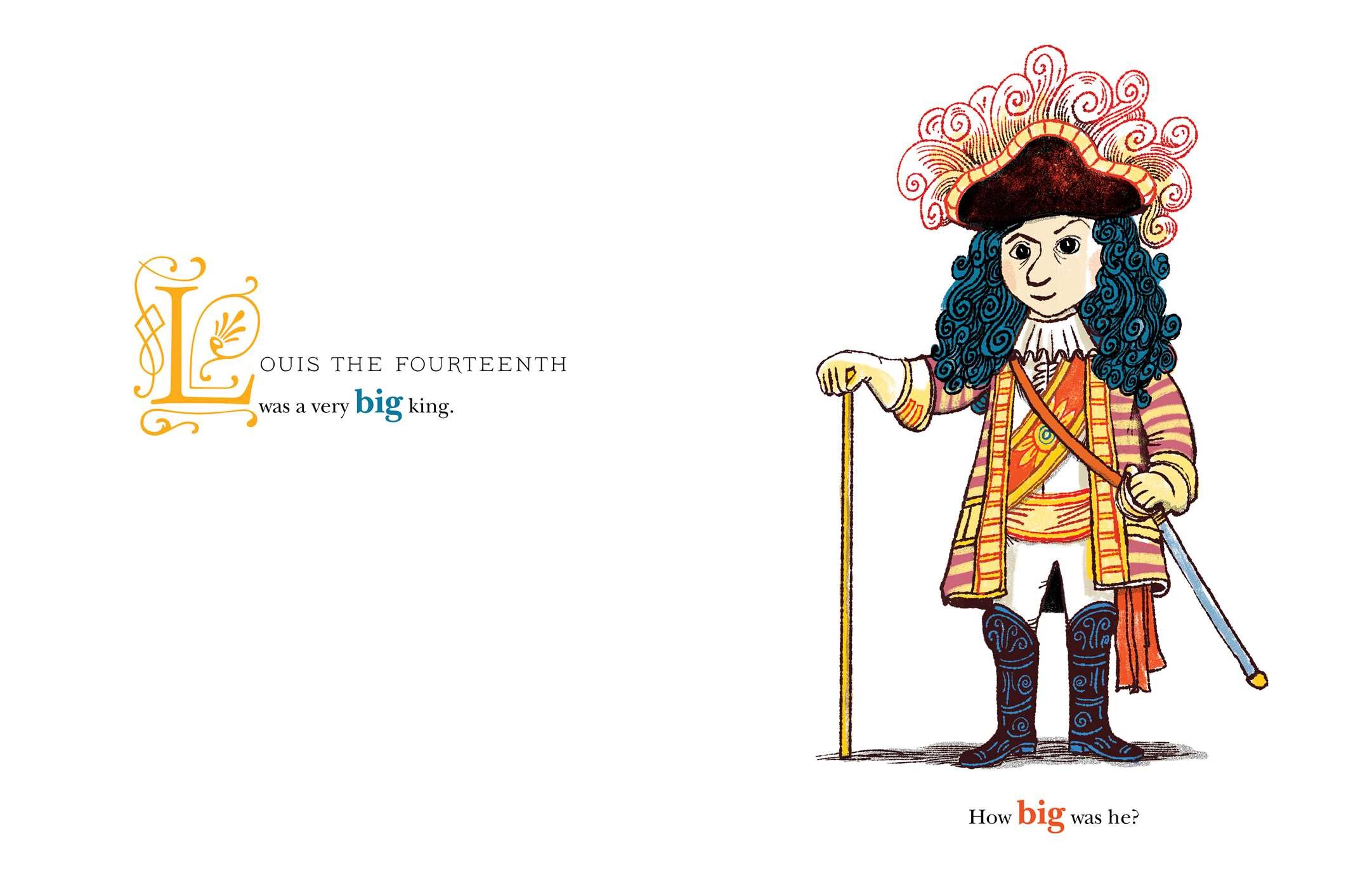 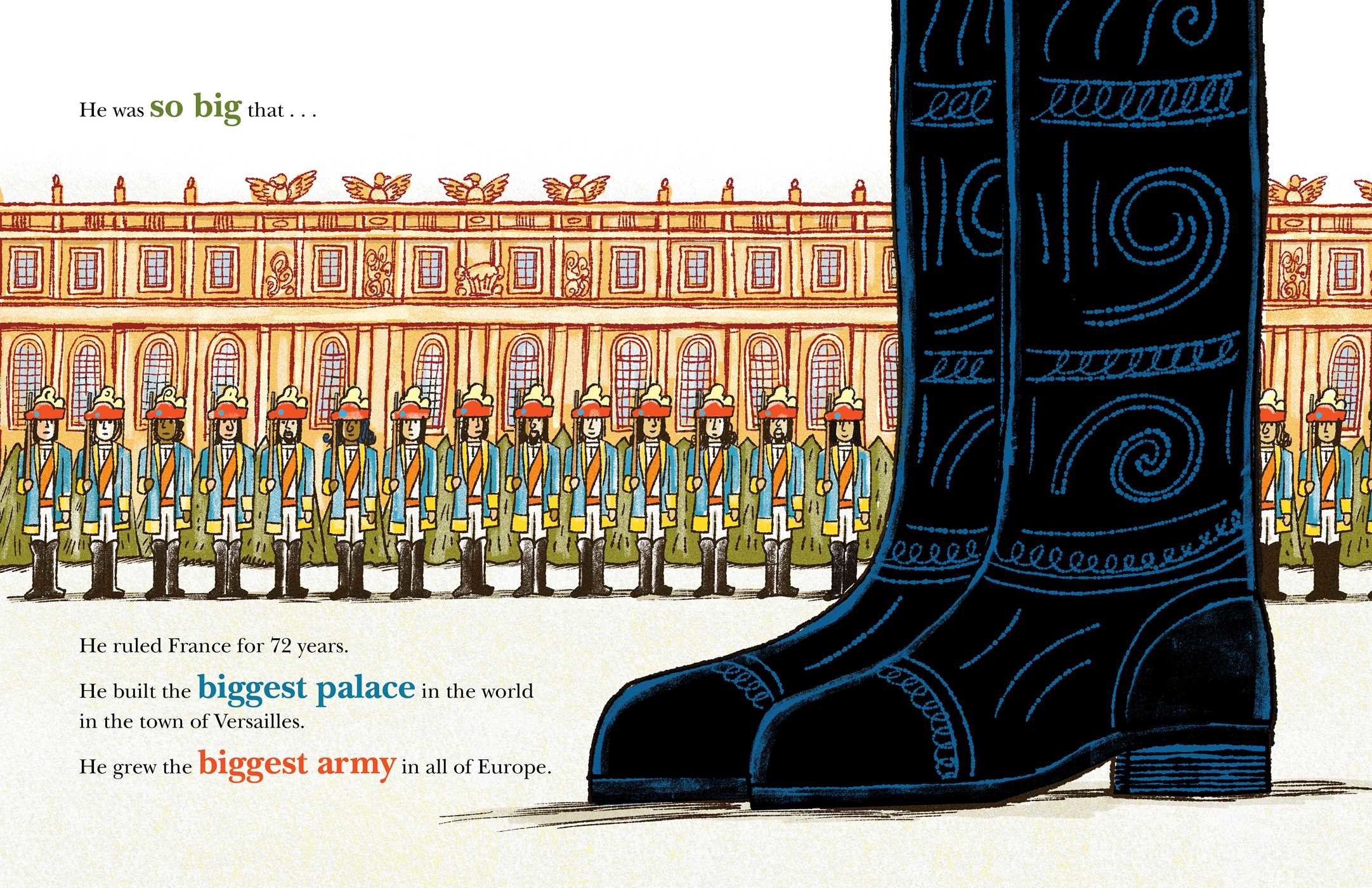 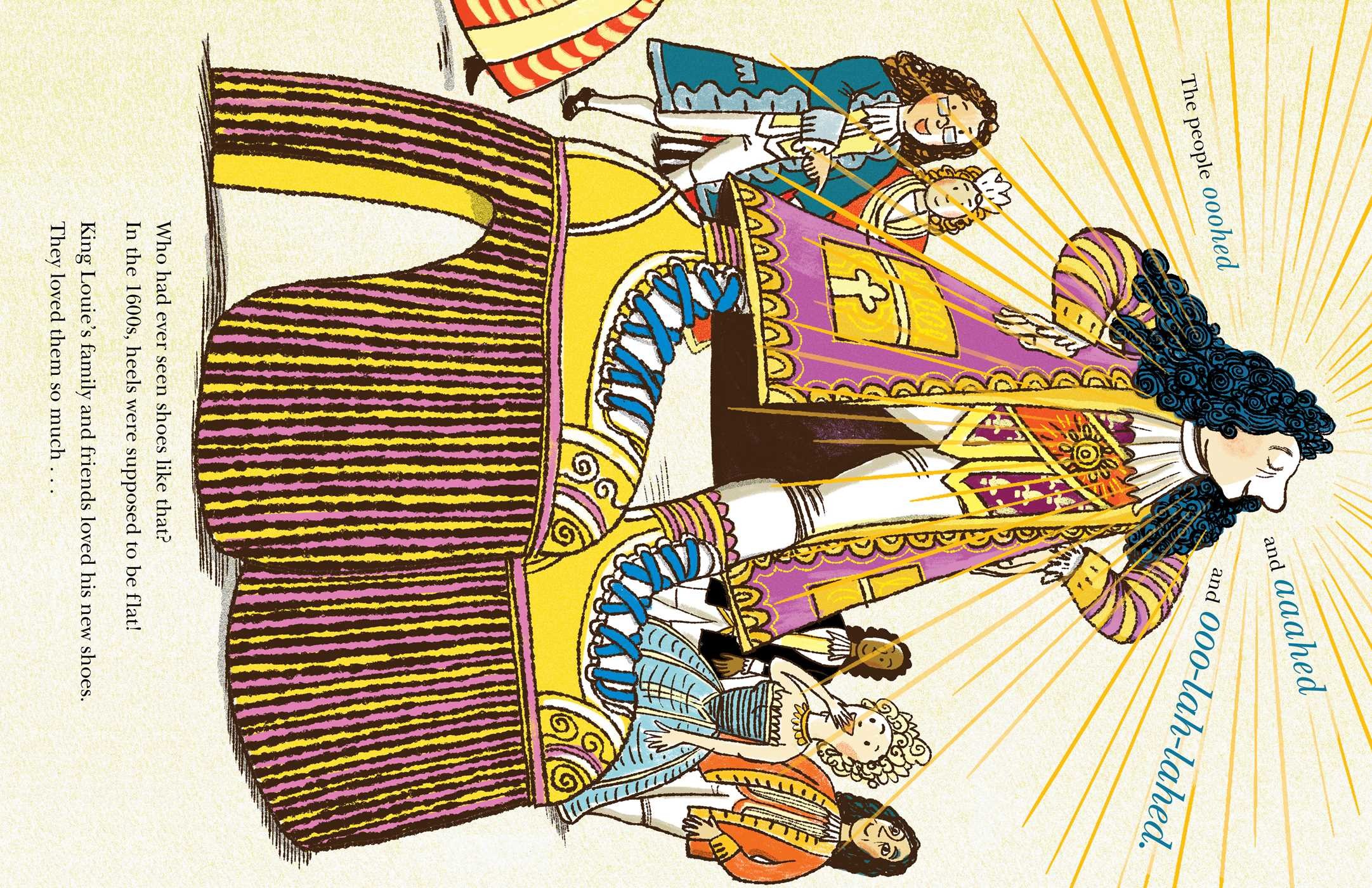 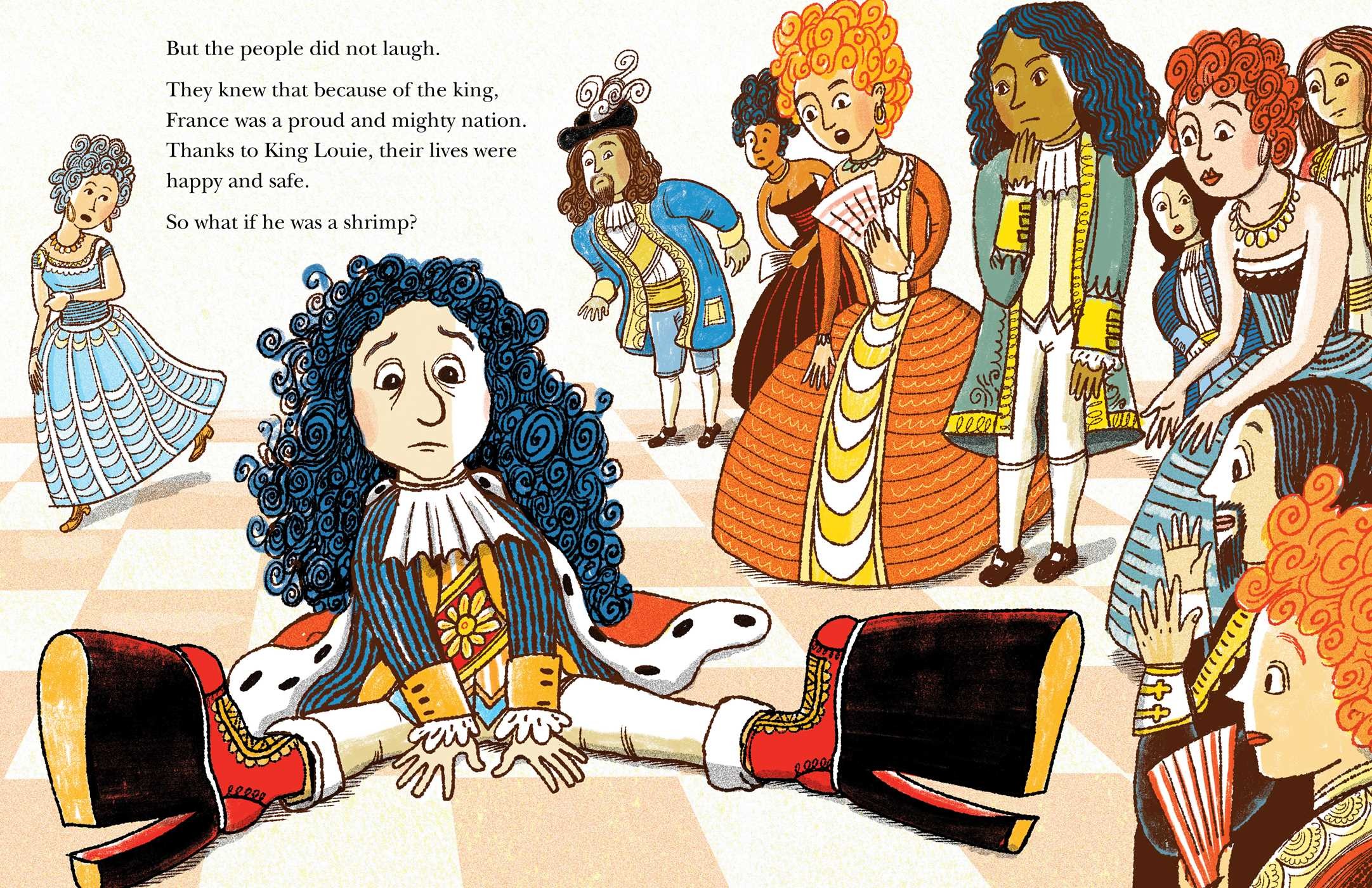 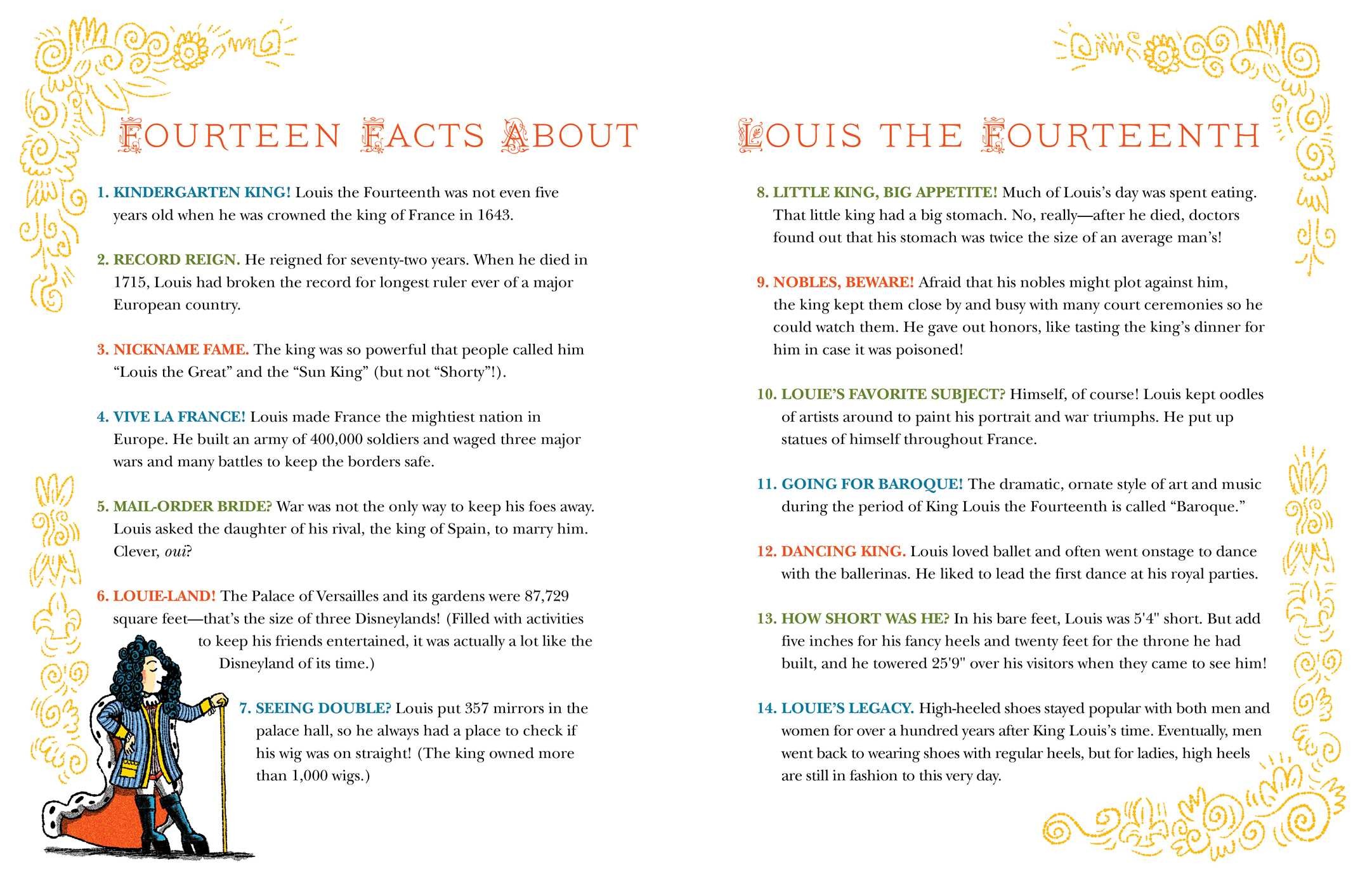 Get to know the hilarious true story of King Louis XIV of France and his famous high-heeled shoes!

King Louie was a very BIG king in all ways but one: He was five-feet-four-inches short. So Louie and his royal cobbler cooked up the perfect high-heeled solution to help Louie appear taller. But after an embarrassing tumble (on the dance floor, no less!) Louie learned that his subjects were loyal no matter how big—or how shrimpy—their beloved Louie might have been. Readers young and old will relate to this silly and sweet story of King Louie XIV—a man who had it all, but still felt small. 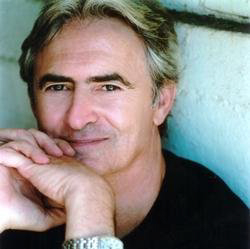 D.J. Steinberg is the author of eighteen books for children, including Grasshopper Pie and Other Poems; Kindergarten, Here I Come; and the Adventures of Daniel Boom a.k.a. Loud Boy series. When he is not working on his books, he has enjoyed a career as an executive, producer, and artist on animated movies and TV shows, and he currently oversees animation production for Nickelodeon. David lives with his wife and three sons in Los Angeles, California. Visit him at DJSteinberg.com. 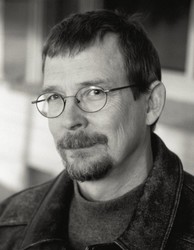 Robert Neubecker is the author and illustrator of Linus the Vegetarian T. Rex and of his own Wow! series. He is also the award-winning illustrator of Shiver Me Timbers by Douglas Florian, Sophie Peterman Tells the Truth by Sarah Weeks, I Got Two Dogs by John Lithgow, and Monsters on Machines by Deb Lund. A graduate of Parsons School of Design, Robert also illustrates for The New York Times and Slate magazine. After twenty years in Manhattan, he and his family live in Park City, Utah. Visit Robert at Neubecker.com.

Steinberg and Neubecker go for baroque in this tale of Louis XIV. King Louis XIV had the biggest palace in the world, the biggest army, and the biggest parties, and he gave the biggest gifts. Unfortunately for someone who cared about size, "King Louie (which is how you say ‘Louis' in French) was a shrimp." So, in Steinberg's humorous account, he compensates. His Royal Carpenter builds him a big throne. The Royal Hairdresser makes him the biggest wig ever. The Royal Shoemaker fashions ridiculously big heels for his shoes. And each effort at making the king larger goes hilariously awry. Predictably, the message of the story is that Louie's size did not matter; the people liked him anyway because he had created a "proud and mighty nation," where they were happy and safe. With no sense of real history, this silly, enjoyable story is enlivened with Neubecker's bright palette and lively caricatures, the highlight being the full-bleed illustration of Louie's wig, too big for the page to contain, later seen drooping in the rain. The endpapers, showing Louie's colorful and high-heeled shoes, are a fitting visual footnote. Young readers will understand Louie's desire to be bigger, to impress people with his importance....Young readers will kick up their heels at such frivolity. (biographical facts) (Picture book/biography. 3-8)

Louis XIV of France was undeniably an important man, a great man, but according to this picture-book account, he was chagrined that he wasn’t a big man. He had a huge, high throne constructed in search of height, but when he returned to the floor he was still the same size. Tall wigs were also a temporary fix. Elevated shoes looked like a good bet, but when the dance-loving monarch fell off his heels at a ball, he worried that his courtiers would ridicule him. “But the people did not laugh. They knew that because of the king, France was a proud and mighty nation,” and Louis happily danced the night away in his stockinged feet....this is a sprightly gigue, enhanced by Neubecker’s humorous, hyperbolized artwork, and little kids will readily discern that, if you can’t control your physical stature, you can certainly advance your social stature.

Louis XIV is the subject of this high-spirited picture book about the extremely vain French ruler’s endeavor to become as great in stature as he was in accomplishments. After trying big hair and a big throne, Louie has the royal shoemaker construct shoes with high heels, unintentionally starting a new fashion trend for men and women alike. Everything works out in the end for the diminutive monarch when he realizes that people still love and respect him, despite his size. The feel-good story told in a conversational tone is accompanied by 14 amusing and informative facts about Louie, altogether painting a rosy picture of the king who “waged war to keep the borders safe.” Neubecker’s cartoon illustrations are bright and full of whimsy. The details of baroque architecture and clothing are depicted in an accessible manner, and the characters are humorous and expressive, especially the baby-faced Louie. In playing with perspective, ¬Neubecker demonstrates how it feels to be a small king with huge aspirations. ¬VERDICT An amusing look at history; ideal for fans of Mac Barnett’s President Taft Is Stuck in the Bath and other titles that show the human side of world leaders. An effective read-aloud or read-alone choice.

Louis XIV of France commands the largest army in Europe, lives in the biggest palace, and gives the biggest parties. But there’s a hiccup, and Steinberg (First Grade, Here I Come!) doesn’t mince words: “King Louie (which is how you say ‘Louis’ in French) was a shrimp.” Neubecker (Keith Haring: The Boy Who Just Kept Drawing), clearly having fun drawing his characters’ Baroque get-ups, portrays the monarch at a humbling height disadvantage compared to the rest of his court, which should win the Sun King instant sympathy with the book’s target audience. With every resource at his disposal, the king tries to add inches by constructing skyscraper thrones, donning gigantic wigs, and wearing towering platform shoes that launch a fashion craze, but he learns the hard way that it’s better to be respected as a sovereign than to intimidate by way of stature. Readers will pick up some valuable lessons, too: history is fun, size doesn’t matter, and grownups do the darnedest things. A closing list of facts (14, naturally) adds a bit of historical heft.

This nonfiction picture book introduces young readers to the king who was big in every way except height. He gave big parties, grew a big army and gave big gifts. But as Steinberg succinctly explains, "King Louie (which is how you say 'Louis' in French) was a shrimp." After failing several attempts to appear taller--a high throne, a full wig--he calls on his royal cobbler to craft a pair of high-heeled shoes.

Louie's shoes are a hit, igniting a fashion trend. But when Louie's preposterous heels make him take a tumble on the dance floor, he realizes height is not the quality that makes a king great. "Off came the shoes./ Up came the king... dancing holes in his stocking feet!"

Using different font colors and sizes, Steinberg's clever words draw as much attention as Neubecker's vibrantly alluring illustrations. Caricature drawings of the exaggerated wig and heels, a revealing carpenter and Louie's tantrum add lighthearted humor to this true tale. Meanwhile, the fashion of the period is creatively communicated through the women's hooped skirts, men's breeches and plenty of rich color. King Louie's Shoes is a lively way to sneak in culture and knowledge with young readers while enjoying a splendid story time celebration of footwear. --Jen Forbus, freelancerDiscover: Diminutive French King Louis XIV learns a big lesson when he tries to be tall.