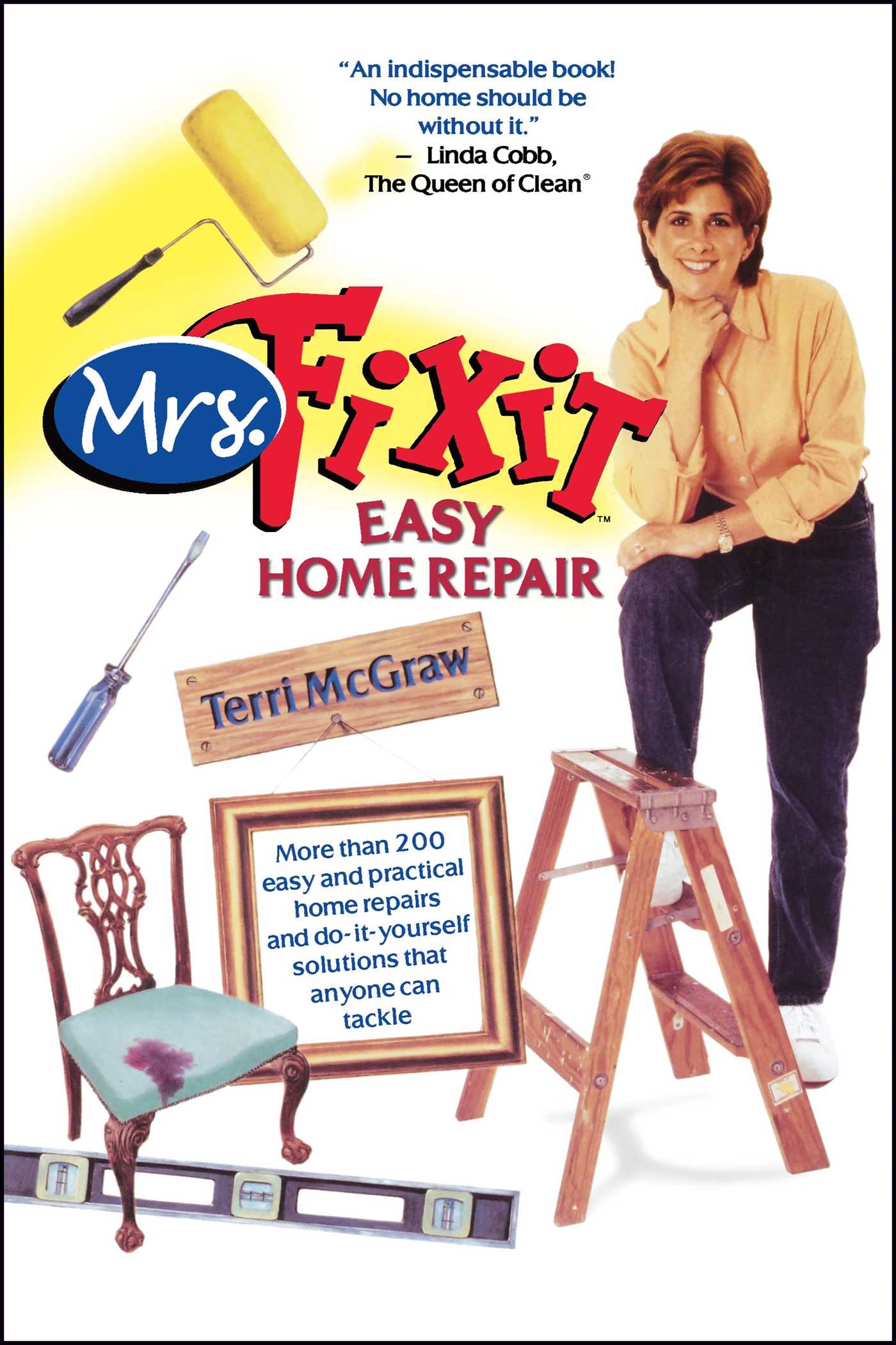 Mrs. Fixit
says
"It's just that simple!"
Clueless about caulking your bathtub or replacing a phone jack? Think fixing a leaky faucet or hanging a window valance are jobs for the experts only? Let Mrs. Fixit give you the tools to tackle hundreds of home repairs on your own. On every page of this easy-to-use household companion, television's hugely popular handywoman lays out fast, easy, money-saving tips and step-by-step instructions for

People are always asking how I came up with the idea for Mrs. FIXIT. "It's simple," I tell them, "I'm married to Mr. Break-it!" My husband is very successful on his own merit, but when it comes to home repairs and fixing things around the house, he's more apt to be called Mr. Hire-it-out! So, after a few years of trying to schedule hired workers to come in to fix things -- and watching expenses mount -- I decided to try and make a go of it myself, to save some money and fix things according to my own time. That's how the idea for Mrs. FIXIT was born.

I had an interest in fixing things, but no building or contracting background. But then again, neither did my dad, and he sure was Mr. FIXIT when I was growing up! My father could fix anything, and I loved to watch him work. In fact, I always hoped he'd ask me to help. Hearing the words "Could you hand me that socket wrench?" or "How about grabbing that Phillips head for me?" was joy to me. I loved being Dad's assistant! My mom had her own specialty too. She could get the crud off a burnt pan like there was no tomorrow, clean the mineral deposits off the inside of an old tea kettle with no scrubbing, or brew up a nontoxic cleaner for just about anything. She had a remedy for just about everything!

It wasn't until I married "Mr. Break-it" and got so fed up with hiring out and wasting money on repairs that looked relatively simple that I decided to roll up my sleeves and try it myself. At first there was always a call in to Dad or Mom for advice, but once I got going there was no stopping me! Sure I had some goofs. I forgot the washer on that showerhead, and yep, you guessed it, water started squirting and spraying all over the bathroom! I didn't think to turn off the water supply when the toilet overflowed -- what a mess that was. And I still cringe when I think of how I stripped the original finish off of that valuable antique rocker. I was so proud of the job I was doing I didn't stop to realize that I was devaluing the piece with each scrape. But there were successes, too -- many of them -- and as they mounted I started telling friends what I'd fixed. Of course they had a lot of the same problems I had, and I was happy to pass on my newfound expertise. I was thrilled when they came back and proudly reported their successes. And all of them said the same thing: I can't believe how simple it was!

That's when I started producing television news segments on easy home repairs, hoping to spread the word and empower all those who thought they had to wait for someone else to come to their rescue. Originally, I thought my easy home repair and household tips would appeal to women only, but during my first convention I really got an eye opener. Setting up my Mrs. FIXIT booth the day before the convention opened, I turned around and saw that I was surrounded by union guys and contractors setting up other booths. Now, these guys are hard-core FIXITs. Every one of them had a tool belt with at least one power tool hanging from it! Some of these guys probably had been swinging a hammer longer than I'd been alive. I felt so intimidated! But there I was, with one of my best friends who agreed to help me for the weekend, setting up and constructing my booth. We heard laughter as they watched us. And when the sign for "Mrs. FIXIT's Easy Home Repair" went up and they offered to give us a hand, I was sure I could read their minds: "What does she know about home repair?"

Well, I don't take a challenge very lightly, so I set out to prove them wrong. As the convention got under way and the demo tape rolled with Mrs. FIXIT segments, I started to capture their attention. And something happened. First one guy watched. Then another. And then another. It seemed as though a chain reaction was taking place. One FIXIT saw a useful tip, and he told his friend, who told his friend, who told another...and by the end of the convention, those guys were coming by to talk tools and tips! I had tips that even handy tool belt guys found useful. That's when I realized Mrs. FIXIT isn't just for the do-it-yourself wanna-be -- it's for everyone!

When Groups and Home Shows began asking for Mrs. FIXIT appearances I was able to answer questions in person. And what questions! First they ranged from home repairs to household tips, but then I started to get unusual requests, like the young man who asked me about his problems with his girlfriend. I told him I'd love to give him some advice, but I wasn't Mrs. FIX-UP! I guess sometimes it isn't just that simple! Then there was the boy who asked me how to get stains off his hog! I wasn't sure what he was asking at first, but after some clarification I found out that this youngster had stains on his pet hog, which he enters in competitions. I don't have much experience with hogs, but I was able to come up with some remedies so that the boy was happy and so was I! It seems that even children can identify with Mrs. FIXIT. My son's friends and neighborhood children think Mrs. FIXIT can fix anything. They come with their broken bike chains, toys, and baseball gloves in need of softening, and, of course, I can't let them down!

The key to Mrs. FIXIT's success is versatility and simplicity. I'm not an expert in the field of home repair, but I've learned through trial and error. And so can you. That's where this book comes in. Mrs. FIXIT's Easy Home Repair is designed to offer help and suggestions to all potential do-it-yourselfers out there. It will show you how to tackle the small problems that you have in and around your home, but don't know exactly how to fix. From defogging your bathroom mirror and removing carpet stains to caulking your tub and repairing a leaky faucet, this book will show you just how easy it is to become a FIXIT. Let me help save you time and money with quick and easy-to-follow household tips and home repairs. Remember, with Mrs. FIXIT by your side it really is...just that simple!