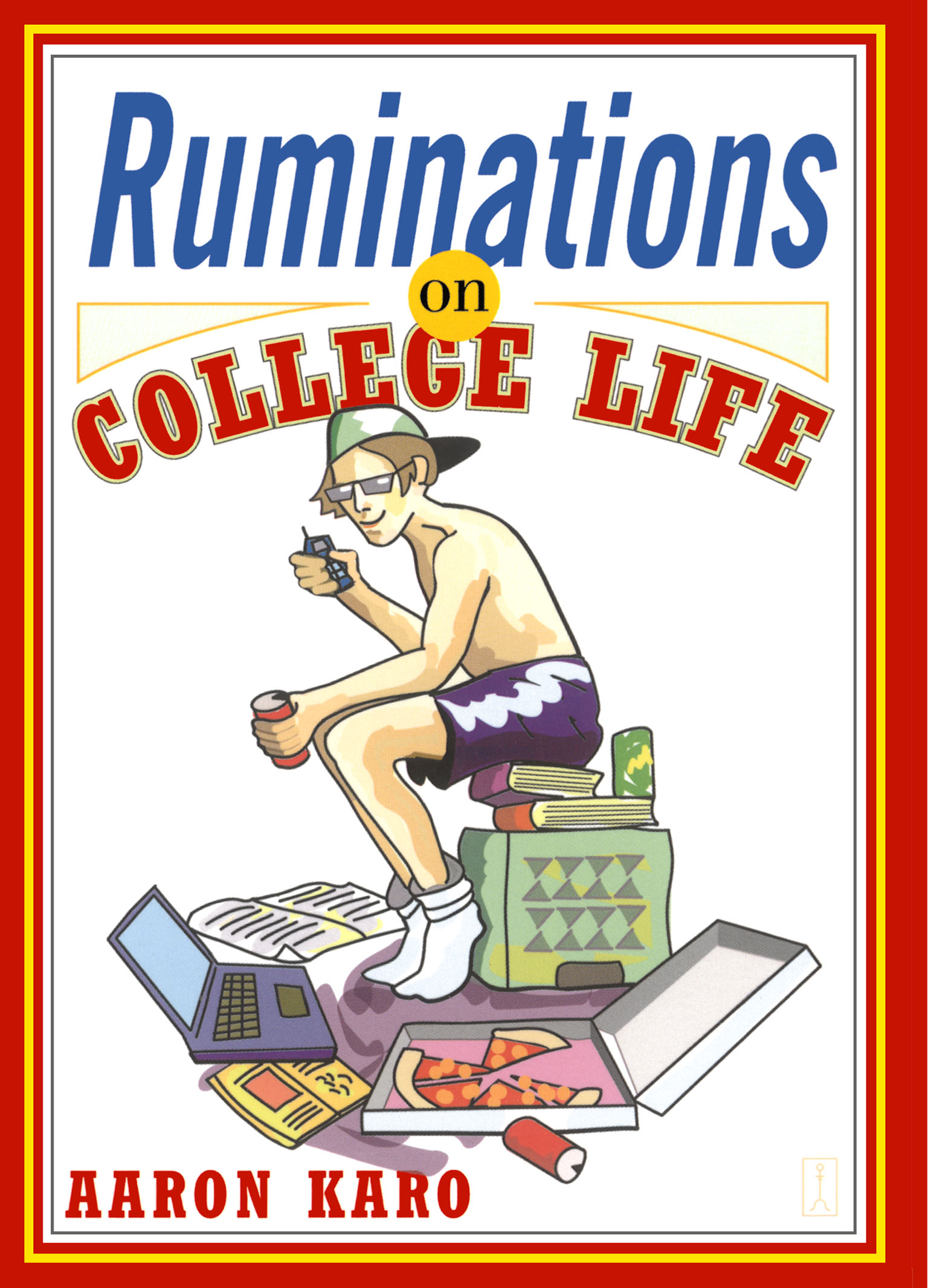 With hilarious insights, observations, and personal
anecdotes on everything from partying all night, to learning
to do laundry, to falling asleep in class, Aaron Karo
has captured the college experience like never before.
It took college freshman Aaron Karo only one week to realize that college was a joke -- an especially funny one that he could share with his friends in a regular email newsletter about life on campus. By his senior year, Ruminations on College Life had become an international phenomenon. Now, for the first time in print, here is the best of the original ezine, previously unpublished material, and brand new introductions to each section by the author. Share in the absurdity and insanity of the college experience with Karo as you read his outrageous inside account of scheming students, crazy professors, confused parents, and rowdy frat boys.
Perfect for anyone who is destined for college, currently surviving it, or already a veteran, this book is a cult classic readers can enjoy alone or read out loud at their next party for tons of laughs.

Your freshman year of college is supposed to be a new beginning. You emerge from the summer following your graduation from high school pretty much hating your hometown and everyone in it. You look forward to college as a chance to start fresh, to make new friends and begin a new phase in your life. Then you get to college and immediately start hanging out with everyone who goes there from your high school, and you're constantly instant-messaging and emailing your friends from home. That's because freshman year isn't a whole new phase of your life; it's really just another place to participate in underage drinking and trying to get laid.

As a freshman, you're the lowest of the low. You don't know anybody, you can't find anything, and no one seems to want to explain anything to you. But everyone knows what it's like to be a freshman, so you have to use it to your advantage: "Excuse me, young man, why are you twenty minutes late for class?" Your response: "I'm sorry, I'm a freshman and I got lost." "Yo, dude, you just threw up all over my girlfriend!" Your response: "I'm sorry, I'm a freshman and I'm wasted." And they'll understand.

In the end, being a college freshman is like being a fetus. You're helpless, you still rely on your mom for pretty much everything, and you have no clue what the hell is going on. By the end of the year, you're wasted off your rocker, still completely clueless, and passed out on your dorm-room floor in the fetal position.

THE FIRST WEEK of college feels kind of like camp. You've got enough clothes to last you a few weeks, you're sleeping in a little bed, and you write letters to your parents and friends. After two months I was like, "OK, this has been fun, but the summer is over now, time to go home." The RA was in the hallway stopping dazed kids from leaving. They were all packed up saying, "Wait, you mean this isn't camp? But it feels just like camp! What? Four more years?"

WHEN I FIRST got to college, I was still kind of in that high school "gotta get involved" mode. You know, like when you used to join clubs just so you could put it on your college application. Anyway, for some reason I decided to run for freshman class president. Of course, I got trounced by some kid who was also still really into "getting involved," even more than me. (I think he needed it for his grad school application or something.) Even though I lost, I think I still had the best posters. They read VOTE KARO FOR PRESIDENT. PLEASE, I ALREADY TOLD MY MOM I WON! I thought that alone should have won me the election.

I WAS PRETTY prepared for college life right from the start because I had visited as a pre-frosh many times. There's nothing better than being a pre-frosh. You're so clueless but you have all of college still ahead of you. I'll never forget my first visit to campus. I got absolutely wasted and ended up on the floor of the dorm bathroom. This cute college girl comes in and asks me if I'm OK. I could barely respond. She said, "So you're a pre-frosh?" I nodded. She said, "OK, let me help you out," and proceeded to stick her fingers down my throat until I threw up, which made me feel much better. I never found out who that mysterious girl was, but I think of her every time I vomit.

HOW HOT WERE the first few days of school? I had like fifteen fans going at once in my room and one mini one that I kept directly in my face all day. That's basically who my good friends are now -- the ones who had the best fans, because I was always in their rooms. This one kid had an industrial-size fan and a grilled-cheese maker. He's my best friend now.

IN EVERY GRADUATING class from high school, there are always like five couples that decide to stay together when they go away to college. This always baffles me. Of all the couples from your school that did this, how many are still together? Zero! That's because it never works! Who are you kidding? Instead of talking to your boyfriend or girlfriend who is a thousand miles away on the phone ("Oh, I can't wait to see you over Thanksgiving break"), get a clue and start randomly hooking up like the rest of us.

A COUPLE OF weeks into my freshman year, when my mom asked me if I knew my way around, I said yes. But what I really meant was, I can only find the one room I have class in, in each of only four buildings, the frat houses, the places that sell beer, anything open twenty-four hours, my room, twelve other kids' rooms, and the cheese steak place.

ARE YOU GOOD with names? I forget them as soon as I hear them. Might as well not tell me at all! I have no idea what anyone's names are except my own, the kids I went to high school with, and that one hot girl who I have never spoken to but stalk from afar.

CAMPUS IS REALLY a communist society. I own nothing, it all belongs to the university. I have no money -- it's all my parents'. My meals are served in little square portions at one brick building only during certain hours of the day! Is this college or the Soviet Union?

I LOVE THE concept of the dining hall. Because before you get to campus for the first time and you're deciding which meal plan to sign up for, older kids will always say the same thing: "The food is terrible but it's more of a social thing for freshmen." So we know going in that the food sucks! It's like we're saying, "Hey, Mom, I'm going away to college, but I don't really know anyone. So could you throw me a few thousand dollars? It's for peanut butter and jelly sandwiches and some friends."

DOES YOUR MOM still ask you about that kid you met the first day of school? You know, you meet this kind of dorky kid the first day and for some reason he'd already been there a week and knows everything, so he helps you move in. Every single time I speak to my mom now, she asks me about him. Like I know. I haven't even seen the kid since!

SO I'M OBSESSED with this gorgeous junior girl who of course won't give me the time of day. But I really don't understand why. I don't think she understands that, she being a gorgeous junior girl and me being a lowly freshman guy, the first eleven times we hooked up, she wouldn't even have to move. I swear I would do all the work -- she could just lie on her back the whole time. Why wouldn't she want that? I don't understand!

MY FRIEND DAN, like me, has no idea how to do laundry. One day he's out of underwear, the girl down the hall won't do it for him anymore, and he's desperate. So he decides to give it a try. He goes down to the laundry room in the basement of the dorm and tries to figure it out. He puts his clothes in the machine, puts the detergent in, puts some quarters in, but the thing is not working. He tries everything, but it's just not happening. Completely bewildered, he sees a little red help button right next to the machine and presses it. Unfortunately, it was the emergency alarm. Sirens in the dorm start blaring, red lights are flashing everywhere, cops are on the scene in minutes, and my friend has to sneak back to his room amid all this chaos wearing only a towel. He never did his own laundry again.

WHEN WINTER COMES around, bringing increasingly cold weather and increasingly packed frat parties, freshmen become faced with the paradox of clothing. If you dress warmly for the walk to the party, you'll sweat to death inside the frat. But if you dress lighter, you'll freeze to death before you even make it in. So really the question is, before you die, wouldn't you rather have a couple of beers first?

AS MY FRESHMAN year of college drew to a close, I realized what a wild ride it had been. I have never consumed so many toxic substances, expelled so many body fluids, or done as much work as I did that year. I guess freshman year is kind of like an economics problem. You want to maximize toxic substances consumed, minimize body fluids expelled, and do a decent amount of work. Of course, that's all theory. In reality, I ended up doing twelve kegstands, puking my brains out, and sleeping through my econ quiz. I love college. 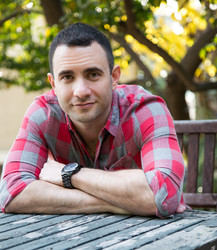 Aaron Karo is an author, comedian, and screenwriter. His books include Lexapros and Cons, I’m Having More Fun Than You, Ruminations on Twentysomething Life, and Ruminations on College Life. He was born and raised in New York, currently lives in Los Angeles, and always pays on the first date. Find him online at AaronKaro.com and follow him on Twitter @AaronKaro.

CollegeHumor.com Karo gets an A+ for this hilarious debut. Ruminations on College Life should be required reading for everyone!