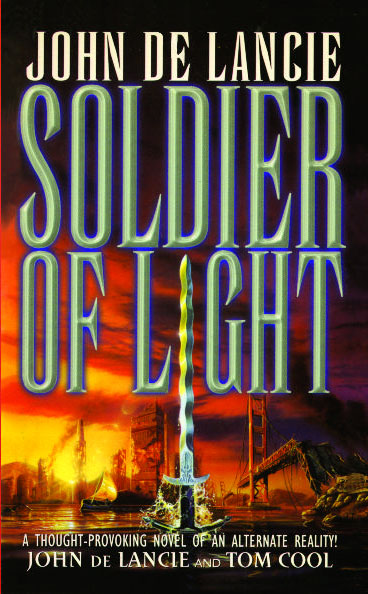 For more than a decade, actor John de Lancie has delighted and provoked audiences as Star Trek®'s most unpredictable antagonist, the enigmatic cosmic entity known only as Q. Now de Lancie has turned his talent and imagination to the creation of a whole new world, a startling vision of Earth on the brink of an evolutionary leap in human consciousness....
It is the day after tomorrow, early in the next millenia, and all over the world people begin experiencing bizarre mental transformations. The majority of men and woman find their minds shutting down, but a handful develop astounding new psychic abilities. They are the adepts.
An ordinary family man. An autistic child. A beautiful Guatemalan revolutionary. A mysterious European traveler with vast ambitions and a secret agenda. As society breaks apart and new alliances form, these strangers become locked in a crucial battle to determine the future of a brave new world.
But more than human minds are at war here, for deep beneath the earth, an alien intelligence, dormant for thirty million years, is stirring once again, and sending its psychic tendrils into the minds of a vulnerable multitude. This inhuman entity has its own plans for the Earth, and they do not include Homo sapiens. Fighting amongst themselves, the adepts can scarcely imagine the awesome and ancient intelligence that will ultimately test a new breed of humanity.
Soldier Of Light is a profound and mind-warping exploration of the outer limits of the mind's potential -- written by innovative and always surprising personalities.

Tom Cool, from Pittsburgh, Pennsylvania, is the author of three books.