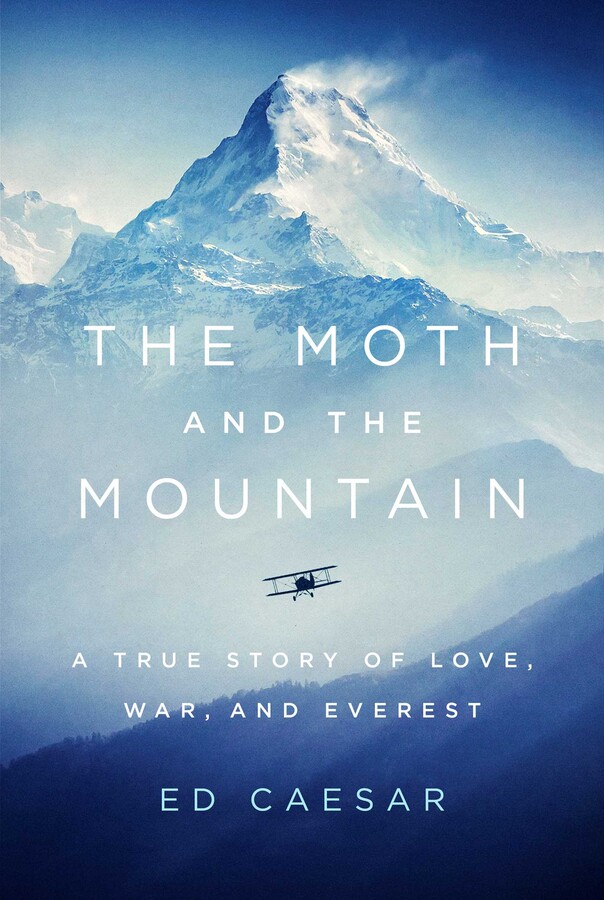 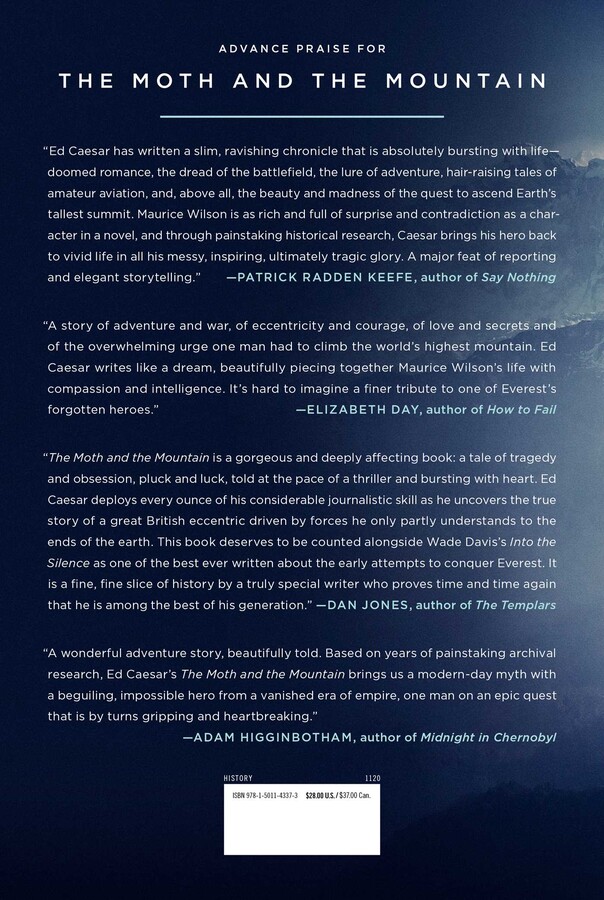 The Moth and the Mountain

A True Story of Love, War, and Everest

An extraordinary true story about one man’s attempt to salve the wounds of war and save his own soul through an audacious adventure.

In the 1930s, as official government expeditions set their sights on conquering Mount Everest, a little-known World War I veteran named Maurice Wilson conceives his own crazy, beautiful plan: he will fly a plane from England to Everest, crash-land on its lower slopes, then become the first person to reach its summit—all utterly alone. Wilson doesn’t know how to climb. He barely knows how to fly. But he has the right plane, the right equipment, and a deep yearning to achieve his goal. In 1933, he takes off from London in a Gipsy Moth biplane with his course set for the highest mountain on earth. Wilson’s eleven-month journey to Everest is wild: full of twists, turns, and daring. Eventually, in disguise, he sneaks into Tibet. His icy ordeal is just beginning.

Wilson is one of the Great War’s heroes, but also one of its victims. His hometown of Bradford in northern England is ripped apart by the fighting. So is his family. He barely survives the war himself. Wilson returns from the conflict unable to cope with the sadness that engulfs him. He begins a years-long trek around the world, burning through marriages and relationships, leaving damaged lives in his wake. When he finally returns to England, nearly a decade after he first left, he finds himself falling in love once more—this time with his best friend’s wife—before depression overcomes him again. He emerges from his funk with a crystalline ambition. He wants to be the first man to stand on top of the world. Wilson believes that Everest can redeem him.

This is the tale of an adventurer unlike any you have ever encountered: complex, driven, wry, haunted, and fully alive. He is a man written out of the history books—dismissed as an eccentric, and gossiped about because of rumors of his transvestism. The Moth and the Mountain restores Maurice Wilson to his rightful place in the annals of Everest and tells an unforgettable story about the power of the human spirit in the face of adversity. 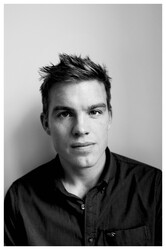 Ed Caesar is an author and a contributing writer to The New Yorker. Before joining The New Yorker, Caesar wrote stories for The New York Times Magazine, The Atlantic, Outside, The Smithsonian Magazine, Esquire, The Sunday Times (London), British GQ, and The Independent. He has reported from a wide range of countries, including the Democratic Republic of Congo, Kosovo, Russia, and Iran. He has won a number of awards for his journalism, including the 2014 Journalist of the Year from the Foreign Press Association of London. His first book, Two Hours: The Quest to Run the Impossible Marathon, was awarded a Cross Sports Book of the Year award.

“An outstanding book . . . The Moth and the Mountain returns readers to a romantic era when Everest was terra nova rather than an experience to be bought . . . The author, a contributing writer for the New Yorker, is a talented storyteller with a flair for detail. . . . Wilson’s story is an entry less in the annals of mountaineering than in the Book of Life. That such an extraordinary person even existed is cause for celebration.”
—The Wall Street Journal

“A rollicking biography of an eccentric adventurer, and a sensitive study of the pressures that drove him . . . Unlike the airy and ill-prepared Wilson, Mr. Caesar grounds his story in patient archival sleuthing. Marrying extracts from Wilson’s letters and diaries with lively prose, he winningly conveys the glamour and contradictions of this outlandish figure, bringing cinematic vividness to his escapades.”
—The Economist

“Gripping at every turn . . . Caesar tells the story in impressive detail, drawing on years of archival research, and he brings to life a historical character who is both fascinating and maddening. . . . It’s impossible not to root for Wilson.”
—Outside

“This slim, riveting book hits all the right notes for an epic tale: the trauma of World War I, messy love triangles, globetrotting adventures, and a wayward soul hellbent on conquering his inner demons.”
—InsideHook

“Irresistible . . . Caesar is a terrific writer. . . . The Moth and the Mountain has many, many riveting moments of storytelling and insight.”
—BookPage

“Ed Caesar has written a slim, ravishing chronicle that is absolutely bursting with life—doomed romance, the dread of the battlefield, the lure of adventure, hair-raising tales of amateur aviation, and, above all, the beauty and madness of the quest to ascend Earth’s tallest summit. Maurice Wilson is as rich and full of surprise and contradiction as a character in a novel, and through painstaking historical research, Caesar brings his hero back to vivid life in all his messy, inspiring, ultimately tragic glory. A major feat of reporting and elegant storytelling.”
—Patrick Radden Keefe, author of Say Nothing

“A wonderful adventure story, beautifully told. Based on years of painstaking archival research, Ed Caesar’s The Moth and the Mountain brings us a modern-day myth with a beguiling, impossible hero from a vanished era of empire, one man on an epic quest that is by turns gripping and heartbreaking.”
—Adam Higginbotham, author of Midnight in Chernobyl

“The Moth and the Mountain is a gripping story of heroism, adventure, madness, and thwarted love, told with extraordinary empathy and intelligence. Ed Caesar is a writer of rare style and depth, and he has written a great and moving work of nonfiction.”
—Mark O’Connell, author of Notes from an Apocalypse

“The Moth and the Mountain is gorgeous and deeply affecting book: a tale of tragedy and obsession, pluck and luck, told at the pace of a thriller and bursting with heart. Ed Caesar deploys every ounce of his considerable journalistic skill as he uncovers the true story of a great British eccentric driven by forces he only partly understands to the ends of the earth. This book deserves to be counted alongside Wade Davis’s Into The Silence as one of the best ever written about the early attempts to conquer Everest. It is a fine, fine slice of history by a truly special writer who proves time and time again that he is among the best of his generation.”
—Dan Jones, author of The Templars

“A story of adventure and war, of eccentricity and courage, of love and secrets and of the overwhelming urge one man had to climb the world’s highest mountain. Ed Caesar writes like a dream, beautifully piecing together Maurice Wilson’s life with compassion and intelligence. It’s hard to imagine a finer tribute to one of Everest’s forgotten heroes.”
—Elizabeth Day, author of How to Fail

"Why climb the world's highest mountain? For King and Country; for the glory of God; because it is there. Or, as for Maurice Wilson, because of an unhappy love affair, a wartime trauma, and a longing to get away from a life whose values are measured at the cash register. In Ed Caesar's telling, the hapless, defiant Wilson becomes an unexpected hero—an unforgettable inspiration for anyone who chafes at the limits of ordinary life."
—Benjamin Moser, author of Sontag

"Caesar has created a widely appealing and affecting character study, microhistory, story of love and loss, and inquiry into some surprising effects of trauma and personal tragedy."
—Booklist

"An evocative portrait . . . This entertaining, well-researched chronicle is a valuable addition to mountaineering history."
—Publishers Weekly

“Credit to Ed Caesar for rescuing such a splendid tale of an engaging maverick from the footnotes of Everest history. . . . Caesar has told the extraordinary story of this intrepid ‘madman’ in an engrossing biography. . . . A lovely book.”
—The Spectator

“A small classic in the making. . . Drivingly paced yet poignant—a compelling portrait of a broken man who became so fixated on Everest that he tried to climb it. . . . An urgent and humane story.”
—Sunday Times (London)

“Meticulously researched . . . Gem of a book.”
—The Guardian

“This bonkers ripping yarn of derring-don’t is a hell of a ride. . . . Scrupulously researched.”
—The Times (London)

The Moth and the Mountain

A True Story of Love, War, and Everest