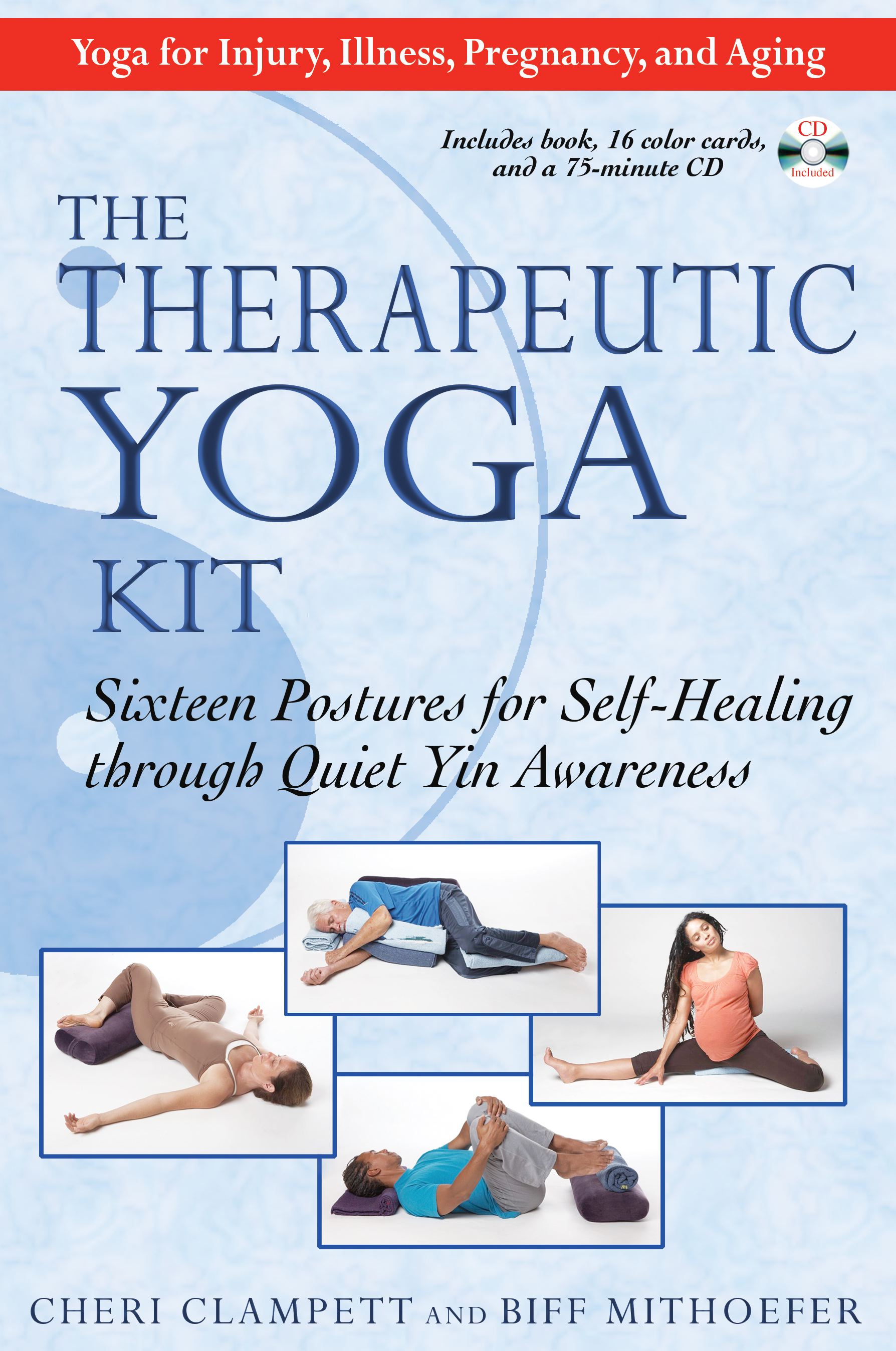 • Presents gentle, adapted postures to promote recovery from injury and illness and relief from stress and fatigue

In The Therapeutic Yoga Kit, Cheri Clampett and Biff Mithoefer combine the gentle healing of Therapeutic Yoga and the quiet awareness of a yin practice to present 16 gentle postures that relieve stress and fatigue and promote recovery from injury and illness. Therapeutic Yoga is a blend of Restorative Yoga, gentle yoga, breathwork, and meditation that releases the body from the fight-or-flight response caused by traumatic events and life’s everyday stresses. A yin practice encourages the attitude of acceptance and helps us leave behind our yang need for constant striving and action.

Each pose represents a gentle, adapted posture that is held for 10 minutes or more in a fully supported state. The authors also include transitional yoga movements and stretches to perform during the routine to release stiffness, rejuvenate the muscles, and lubricate the joints. The 16 posture cards and 75-minute audio CD of guided routines and meditations that accompany the text facilitate the creation of a personalized practice. The authors emphasize achieving total relaxation in the specific postures to activate the body’s self-healing abilities. It is in this place of comfort and stillness where true healing begins.

The Beginnings of Therapeutic Yoga

As an adult I can now look back at my birth and childhood and see that even then a healing path was forming. The challenges I experienced through a difficult birth and childhood illnesses brought forth a desire to help others on the path of healing. That feeling was strengthened in my twenties when I was diagnosed with cancer. It revealed itself to me in yoga class one day. What had been a sharp, shooting pain that I was telling myself was probably intestinal problems, clearly became a warning signal. That signal came to me at the end of yoga class in a pose called savasana, or “corpse pose.” As I lay perfectly still in this pose of deep relaxation, I began to feel my body in a way that was new to me. It was like listening to an old friend that I cared deeply about. I felt a tremendous sadness flow through me. I realized that for as long as I could remember I had not been listening to my body, and there was so much it needed me to hear. Tears streamed down my face as I allowed myself to feel it all. At that moment I became aware that something was physically wrong with me and that it was time to act on this feeling. I also knew in that moment the practice of yoga had brought me back to myself.
Soon after that class, I went to see the doctor and was diagnosed with cancer. Surgery and treatment followed, but it wasn’t until nearly five years later, when my cancer returned, that a deeper healing occurred. At that time, my doctor thought I should have a partial hysterectomy. I had a sense that cutting away the cancer wouldn’t get to the deeper root of what it was trying to show me. I don’t believe this is the case for everyone. There are many factors, such as genetic and environmental issues, that can cause cancer. But for me, at that time, the reoccurrence of cancer signaled both an opportunity and a necessity to explore nontraditional forms of healing. I couldn’t ignore the inner calling to approach this new threat with all my knowledge and senses.
I now believe that the cancer was calling me to a deeper healing, a journey for which I am grateful. It brought me to an even greater level of wellness and connection with my body, mind, and spirit. Upon finishing my own healing regime, I felt there was nothing more important than helping others on their path to wellness. I began studying massage and hands-on healing techniques. Later I became a certified yoga teacher and began teaching yoga classes in Los Angeles to people living with HIV, AIDS, cancer, and other major health issues. Often, because students were not physically able to perform the classical yoga postures, I would experiment with gentle yoga, breathwork, guided meditation, and hands-on healing work. The results were tremendously beneficial. Through assisting Anna DeLurey, a well-respected teacher in Los Angeles, I learned about Restorative Yoga, which allows students to relax into poses they might not otherwise be able to do. I quickly realized that Restorative Yoga was an ideal practice for anyone in the process of healing. I incorporated it into the classes I was teaching. Thus the basic tenets of the Therapeutic Yoga system were born--gentle yoga, Restorative Yoga, breathwork, guided meditation, and hands-on healing work.

Resting Half Moon
Stretches the intercostal muscles (the muscles between the ribs) and the serratus posterior inferior and frees the diaphragm, benefiting respiration. Lengthens the quadratus lumborum, freeing adhesions in this often tight muscle. Creates a squeeze and soak for many internal organs, such as the stomach, liver, and kidneys.

Props and Positioning
You will need one bolster and one or more blankets.

Entering and Exiting the Pose
Place your bolster with one or more blankets stacked on top to your right. Position the support perpendicular to the spine. Sitting on your right hip, use the left hand to ensure the right rib cage lengthens as you extend the torso up and over the support. As you come deeper into the pose, slide the right hand out and along the floor straight above the head. Your head may rest on your right arm or a folded blanket. Slide the left leg forward and the right leg back behind you to create a scissor shape. Or, just extend both legs straight, one resting on top of the other. Stretch your left arm over your head and bring the palms together, or clasp the left wrist with the right hand to deepen the stretch through the left side.
To come out of the pose, place the left hand on top of the bolster. Bring the legs together with the knees bent. Using the strength of your arms slowly press up to a seated position. Change sides.

Variations
If the spine is long, you may need to create a higher support under your rib cage. For a shorter torso, just a bolster may do. A folded blanket under your forward leg or between your knees can be comfortable. If there is any strain to your neck, use a folded blanket for support.

Gentle Yoga for Resting Half Moon
Before ending the pose, while still lying on the side, take the hand that has been resting over the head and sweep it back behind the body, draw the fingers down toward the feet and then up in front of the torso, forming a complete circular movement. Do this for several rotations. Repeat when finishing the other side of the supported pose.

Cautions and Contraindications
Use caution during the last two trimesters of pregnancy and with disk disease; spondylolisthesis; spondylosis.

Cheri Clampett is the founder and director of the Therapeutic Yoga Training Program. She teaches Therapeutic Yoga at hospitals, wellness centers, and yoga centers worldwide, including the Cancer Center of Santa Barbara, and lives in California.

Biff Mithoefer teaches Yin Yoga at Omega Institute, throughout the U.S., and internationally. He is the author of The Yin Yoga Kit, coauthor of The Therapeutic Yoga Kit, and a founder and director of the Jamtse Sponsorship Program for the support of Tibetan refuge children. He lives in Vermont.

"Cheri is a leading light in different kinds of yoga, which she teaches all over the world. Because of her vast experience and her constant openness to learning more, her book can certainly benefit yoga students as well as anyone interested in the healing arts in general."

– Laura Huxley, author The Child of Your Dreams

“As one who has experienced the gentle, healing power of Cheri Clampett’s work, I highly recommend The Therapeutic Yoga Kit to all those who wish to enjoy greater peace, harmony, and vibrant energy in their lives.”

“Cheri and Biff have humbly and honestly tested the techniques they present in The Therapeutic Yoga Kit. If readers practice the ideas presented in this book they will find many seeds of health and healing.”

“Simple yoga practices are a blessing in their ability to bringing about profound and lasting healing. Through Cheri Clampett’s intuitive heart and teaching experience, The Therapeutic Yoga Kit offers us a perfect prescription for abundant well being.”

– Nischala Joy Devi, author of The Secret Power of Yoga: A Woman’s Guide to the Heart and Spirit

“The Therapeutic Yoga Kit is an asset to any yoga practice and a valuable tool for any yoga teacher.”

“The Therapeutic Yoga Kit offers practical information applicable to anyone and everyone interested in the art and science of yoga. Cheri Clampett and Biff Mithoefer’s creative inspiration is a healing tool for us all to embrace.”

" . . . the best collection of materials I've seen for practicing yin yoga, yoga therapy, and restorative poses. . . . As a yin yoga teacher who works with seniors and fibromyalgia patients, I can't say enough good things about the therapeutic yoga kit. The kit is accessible for beginners and inspiring for experienced students and teachers."

"The Therapeutic Yoga Kit conveys the tried and tested techniques of internationally practiced yoga teachers in a personally-adaptable and easy-to-use form."

"The synergy of the two authors and their intertwining expertise and suggestions, drawn from putting these techniques into practice, offers a treasure trove of wisdom. . . . Clampett and Mithoeffer sketch out a comprehensive map of how to utilize props and blankets to support a variety of body types, ability levels, and circumstances."

" . . . makes a fine gift choice, or pick, for any individual interested in furthering yoga techniques and applying them to healing."

"I found the set easy to comprehend, and the poses are gentle and relaxing. Each pose is held for about 10 minutes, and with the accompanying CD to help walk you through and to provide a lovely musical background, it truly is a stress-relieving set!"

"If you don't want to go with a DVD and prefer a CD or book for your practices, this one is top of the line for those who need a more gentle supported type of yoga."