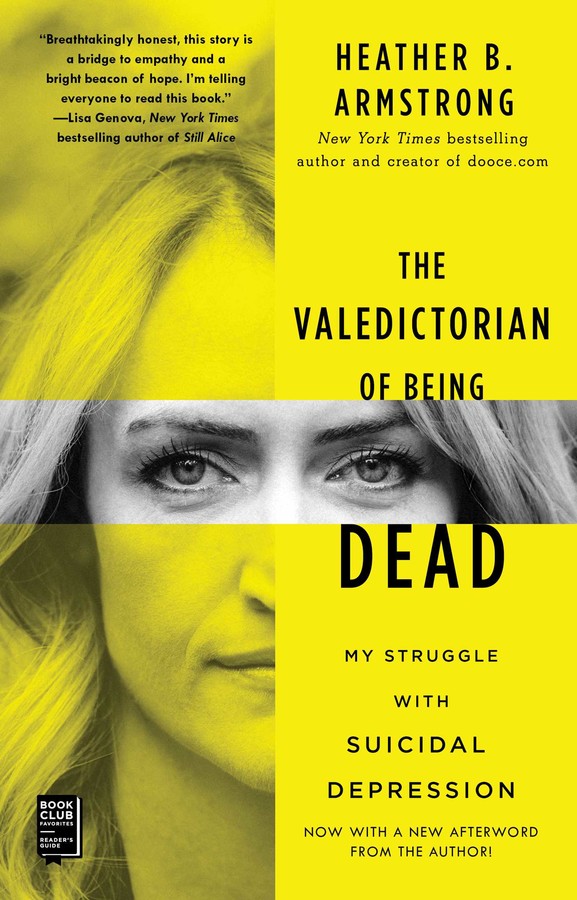 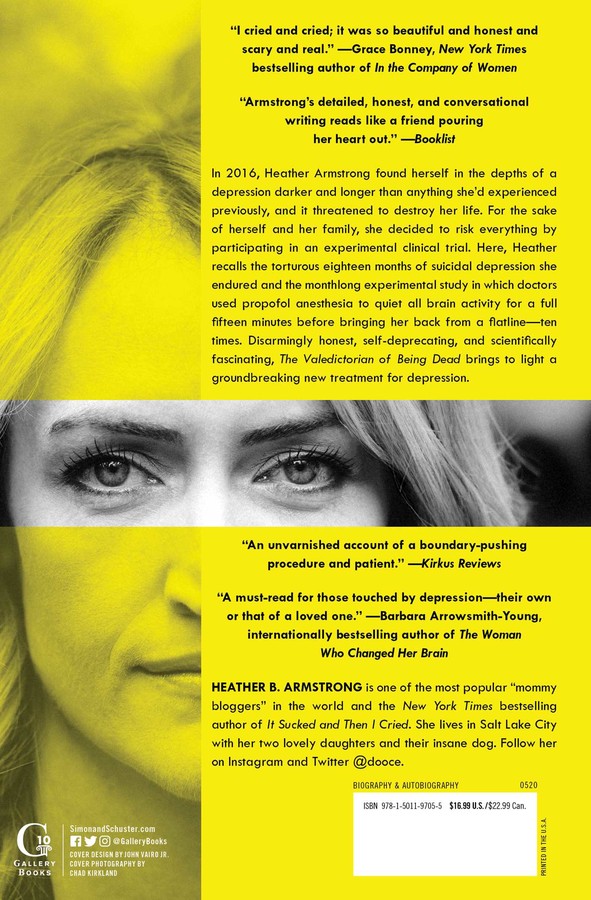 The Valedictorian of Being Dead

My Struggle with Suicidal Depression

From New York Times bestselling author and blogger Heather B. Armstrong comes an honest and irreverent memoir—reminiscent of the New York Times bestseller Brain on Fire—about her experience as the third person ever to participate in an experimental treatment for depression involving ten rounds of a chemically induced coma approximating brain death.

For years, Heather B. Armstrong has alluded to her struggle with depression on her website, dooce. It’s scattered throughout her archive, where it weaves its way through posts about pop culture, music, and motherhood. In 2016, Heather found herself in the depths of a depression she just couldn’t shake, an episode darker and longer than anything she had previously experienced. She had never felt so discouraged by the thought of waking up in the morning, and it threatened to destroy her life. For the sake of herself and her family, Heather decided to risk it all by participating in an experimental clinical trial.

Now, for the first time, Heather recalls the torturous eighteen months of suicidal depression she endured and the month-long experimental study in which doctors used propofol anesthesia to quiet all brain activity for a full fifteen minutes before bringing her back from a flatline. Ten times. The experience wasn’t easy. Not for Heather or her family. But a switch was flipped, and Heather hasn’t experienced a single moment of suicidal depression since.

The Valedictorian of Being Dead was previously published with the subtitle “The True Story of Dying Ten Times to Live.”

This reading group guide for The Valedictorian of Being Dead: The True Story of Dying Ten Times to Live includes an introduction, discussion questions, and ideas for enhancing your book club. The suggested questions are intended to help your reading group find new and interesting angles and topics for your discussion. We hope that these ideas will enrich your conversation and increase your enjoyment of the book.

Heather B. Armstrong might be best known as the mommy blogger behind the incredibly popular website dooce, but she’s also been struggling with depression all her life. A few years after her ex-husband moves across the country Armstrong is drowning in her depression, barely able to cope with working full time and raising her two daughters as a single mom.

Desperate to clear the fog of depression, she agrees to a study that will take her close to brain death over and over again. It was possible the procedure could do nothing, but it was also possible it could reproduce the benefits of electroshock therapy without the side effects. Over the course of her treatment, Armstrong reevaluates her relationships with family members, her kids, herself, and most importantly of all, her depression.

1. The title The Valedictorian of Being Dead comes from the book’s prologue, in which author Heather B. Armstrong takes pride in how well she approximates being dead. In other parts of the memoir, she clearly relishes being the best at whatever she does. What do you think this says about Armstrong’s personality? How might it play into her depression?

2. To those looking in from the outside, Armstrong was successfully managing being a single parent to two daughters while working full-time. However, she was barely getting by on the inside. Have there been times when it seemed like you had it all together, but were actually falling apart?

3. Heather B. Armstrong is well known as a “mommy blogger.” If you’re a parent, do you have any favorite mommy blogs? Take turns recommending the blogs and websites you have found useful on your parenting journey.

4. Armstrong makes it clear over and over again that suicide is not a selfish act — depressed people think that living is selfish because those around them would be better off if they are gone. Can you think about a time a person’s suicide (or attempted suicide) affected you, and you felt that it was a selfish act? Have you re-evaluated that feeling since reading Armstrong’s book?

6. When she’s at her worst, Armstrong turns to her mother and is able to be completely honest with her about her feelings without fear of judgment. Do you have anyone who plays that role in your life?

7. Have you had friends or family members who suffered from depression? If so, take turns discussing your personal experience with this disease and how we can be more empathetic to those with this illness.

8. Armstrong resorts to drastic measures to deal with her depression in this book, and the responses from the people in her life vary greatly. Why do you think her siblings’ reaction is so wildly different than her father’s and stepmother’s?

9. As Armstrong continues with her sessions, she begins to feel joy again as the depression lifts. She describes days of just feeling happy. Have you ever been aware of your own happiness like that? If so, take turns describing when it happened and how it felt.

10. One thing that struck Armstrong deeply was that everyone involved in the study was donating their time; they weren’t paid to be there. Have you ever been moved in the same way by people volunteering because they believe something can make a difference? Have you ever volunteered your time over the long term?

11. Armstrong blows up myths around platitudes non-depressed people tell people who suffer from depression: for example, just get up and exercise and you’ll feel better. Armstrong turns this on its head by volunteering to assist someone running the Boston Marathon because of her depression, and it makes things even worse. What are some of the other myths about depression that Armstrong busts over the course of her memoir?

12. Anxiety is a constant companion throughout this book, and it will probably feel familiar to many readers, even if they don’t suffer from depression. Can you remember a time when anxiety got the better of you and how you were able to cope?

13. While Armstrong’s treatment did wonders for her, it may not work forever. If you were in her shoes and began feeling the depression returning, would you subject yourself to the treatment again, knowing how difficult it was the first time around?

1. Pair The Valedictorian of Being Dead with another memoir on depression, such as Allie Brosh’s Hyperbole and a Half. Compare and contrast the way depression is portrayed in the two books.

2. Read some of Heather B. Armstrong’s sponsored brand posts on her mommy blog, dooce. Discuss her choice to stop accepting this type of income, and whether you would have made the same decision.

3. Heather B. Armstrong has a previous memoir called It Sucked and then I Cried, which is about the birth of her first child. Pair these two books together and discuss how the threads of depression from the first book tie into her second.

4. Episode 102 of Heather B. Armstrong’s podcast is called “Destigmatize,” and it confronts the suicides of Anthony Bourdain and Kate Spade. Listen to the episode, and then have a discussion about how we can all help to destigmatize mental health issues. 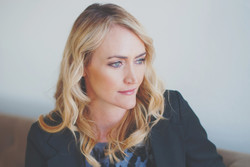 Heather B. Armstrong is widely acknowledged to be the most popular “mommy blogger” in the world. Her website, dooce®, has twice been listed as one of the 25 best blogs in the world by Time magazine and Forbes listed it as a top 100 website for women. In the eighteen years that Heather has been shaping the internet writing community, she’s worked to create targeted content not only for fellow parents but also for numerous global brands—including Ford, Nintendo, and Clorox—and written a New York Times bestseller, It Sucked and Then I Cried. She lives in Salt Lake City with her two lovely daughters and an insane herding dog.

“Breathtakingly honest, this story is a bridge to empathy and a bright beacon of hope. I’m telling everyone to read this book.” –Lisa Genova, New York Times bestselling author of Still Alice

"In The Valedictorian of Being Dead, Heather Armstrong carries the reader along her fascinating journey out of the abyss of depression, intricately weaving the threads of family, suffering, and scientific breakthrough. This touching memoir, full of scenes both silly and profound, manages to shock, educate, and inspire." –Alex Korb PhD, author of The Upward Spiral: Using Neuroscience to Reverse the Course of Depression, One Small Change at a Time.

"I was moved by this real, raw, hilarious and deeply personal story of one woman's epic battle with major depression and found myself cheering for Heather and her entire family by the end of book."  –Wendy A. Suzuki, PhD, author of Healthy Brain, Happy Life

“A story of courage, hope, love, and science overcoming the despair of depression. It is a must read for mental health professionals and those touched by depression—their own or that of a loved one.” –Barbara Arrowsmith-Young, internationally bestselling author of The Woman Who Changed Her Brain

“I read The Valedictorian of Being Dead cover to cover in four hours. I cried and cried; it was so beautiful and honest and scary and real. I think this book will be so helpful for a lot of people living with depression, especially parents.” –Grace Bonney, creator of Design*Sponge and New York Times bestselling author of In the Company of Women

“As the lead anesthesiologist on the study, it was emotional for me to hear of Heather’s experience. She helped me to gain some understanding about what folks go through when they are sick, what the experience of treatment was for her and her loved ones, and what the treatment now means to her.” –Scott C. Tadler, MD, University of Utah School of Medicine

“Armstrong’s detailed, honest, and conversational writing reads like a friend pouring her heart out, giving readers an emotional portrait of what it is like for individuals and their loved ones to struggle with serious depression.” –Booklist

The Valedictorian of Being Dead

My Struggle with Suicidal Depression

More books from this author: Heather B. Armstrong