Famous cartoonist Art Baltazar is the creative force behind the New York Times bestselling, Eisner Award–winning DC Comics’s Tiny Titans, cowriter for Billy Batson and the Magic of Shazam!, Young Justice, Green Lantern: The Animated Series, and artist/cowriter for the awesome Tiny Titans/Little Archie crossover, Superman Family Adventures, and Itty Bitty Hellboy! Art is one of the founders of AW YEAH COMICS comic shop and the ongoing comic series! Franco is from the great state of New York. He and his forehead have traveled the world and in between he writes and draws stuff and sometimes throws paint around on canvas. He is the creator, artist, and writer of Patrick the Wolf Boy and AW YEAH COMICS! He has also worked on titles for various comic companies, including the critically acclaimed Superman Family Adventures, Young Justice, Billy Batson and the Magic of Shazam!, Green Lantern: The Animated Series, Itty Bitty Hellboy, Battlestar Galactica, and the New York Times bestselling, multi-Eisner Award–winning series Tiny Titans. Chris Giarrusso is the Harvey Award–nominated artist and writer best known for creating, writing, and drawing G-Man, a series of books about a young superhero who gains fantastic powers when he wears a magic cape, and Mini Marvels, the comics series featuring pint-sized versions of Marvel's most famous heroes! Chris’s work has been published by Andrews McMeel, Scholastic, Marvel, Image, IDW, and several independent publishers. 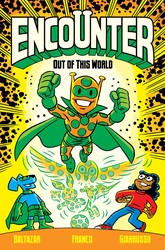