Laura Zam is a Sexuality Educator, Certified Trauma Professional, wellness trainer, award-winning solo performer, HuffPost blogger, TEDx speaker, and workshop leader, whose work focuses on sexual healing. Her writing appears in The New York Times (Modern Love), Salon, HuffPost, SheKnows, NextTribe, the Forward, in international journals, and in five book anthologies. Her solo pieces have been performed in New York at The International Fringe Festival, The Public Theatre, the United Solo Festival (Off-Broadway), and others. National venues include The Kennedy Center, The National Theatre, and the U.S Holocaust Memorial Museum, as well theaters, conferences, schools, libraries, and universities across the U.S. and abroad. Laura has been awarded numerous grants, including a Tennessee William's Fellowship and five Artist grants from the DC Commission on the Arts and Humanities. She has also taught at a number of universities including Brown University and UC Berkeley. 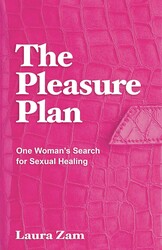